If the second annual Wargaming.net League Grand Finals taught us anything, it was that pro gamers who aren’t playing World of Tanks may want to rethink that strategy. Indeed, The Grand Finals were as slickly produced as a prime time television event, featuring a dazzling stage, numerous commentators and palpable excitement that rarely penetrates the gaming world. Taking place over the weekend at EXPO XXI in Warsaw, we were at the tournament to witness every devastating blow, upset and all the excitement that entailed, as well as getting one-on-one time with Wargaming CEO, Victor Kislyi.

Twelve teams competed in The Grand Finals including RG Razer, Elevate, RUlette, Arete, Na’Vi, Virtus.Pro, YaTo Gaming, EL Gaming, WP.SC6, HellRaisers, Kazna Kru and Schoolbus. Out of all twelve teams, Na’Vi was the most heavily favored to take home the title, as they not only managed to do so the year before, but had also been displaying unmatched play throughout the past year. While much of the first day’s action took place backstage, the premier matches were held on stage in front of a crowd of thousands. Games took place in the revised Attack/Defend setup and the first team with five wins won the round. Day 1 of the Grand Finals kicked off with South Korean’s Arete going up against the European wild card Kazna Kru. Kazna easily downed Arete, winning 5-1. In fact, they likely would have swept the round if not for an unfortunate crash in round 5 that saw Arete come back and win the round. 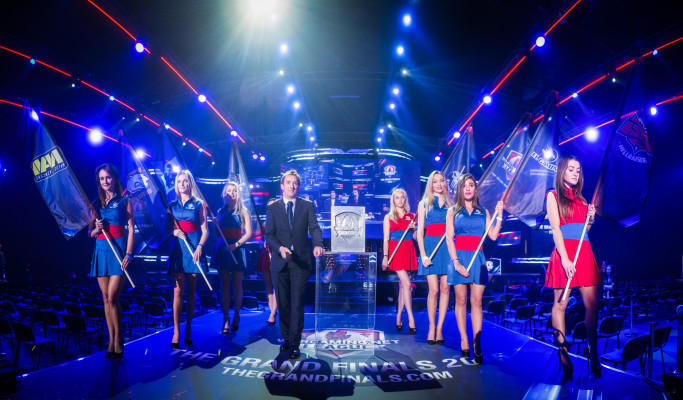 The second match featured two Chinese teams — EL Gaming and RG Razer — going head to head. Clearly the better team, EL forwent deep strategy and simply showed aggressive dominance, easily sweeping RG. The third match of the day was the most exciting and a favorite of the day, seeing the European Schoolbus go up against China’s YaTo Gaming. Two of the most interesting teams in The Grand Finals, Schoolbus catches the eye with their handmade t-shirts, unusual naming and stylized children’s crosswalk logo. They have a unique carefree attitude about them that was contagious, clearly infecting the former non-believers in the crowd. YaTo, on the other hand, was the clear underdog of the tournament, established only last year. Their relative inexperience was refreshing and they were clearly approaching the game with a unique mindset.

YaTo shrewdly realized that they were outmatched by Schoolbus, so instead of devising any sort of complex strategy, simply punched down the middle and engaged in a brutal onslaught, trading hit for hit. This proved effective in Round 1, but YaTo quickly adapted and won four in a row. For the sixth round, YaTo changed their strategy and split up, smartly hunting down Schoolbus one by one and winning the match. Round 7 saw YaTo again playing conservatively, but unfortunately for them, were knocked out at the last second and saw the match go to Schoolbus. 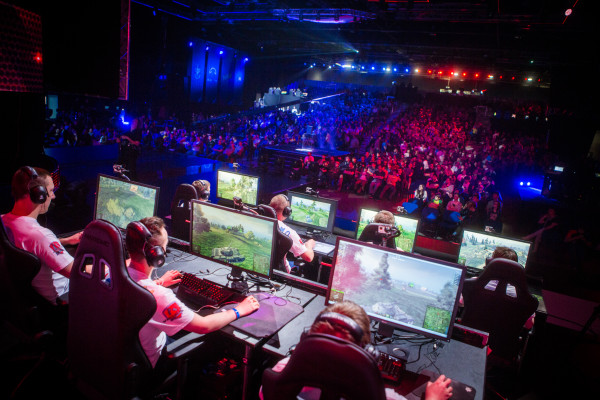 Sadly, North America didn’t do any better than expected, with teams RUlette and Elevate winning only three out of twenty rounds. RUlette impressed during their match with YaTo, where the inexperience and unconventional playing style of the Chinese team clearly benefited them. While Elevate won two rounds, YaTo’s victory was never in serious doubt. World of Tanks is like the soccer of North American eSports; a realm where we’re simply not experienced enough yet to seriously compete at a global level — even if these teams are unquestionably great on their own merits. One bright spot was Jonathan “Zoidbergenstein” Pickard who quite frankly impressed all weekend. Not only did he keep cool under pressure, encouraging and rallying his team in-spite of clear doom, but he was well-spoken and refreshingly earnest when he was able to join the commentating panel on Day 2. He’s a great face for North American eSports and is furthering our status in World of Tanks abroad.

Speaking of Day 2, eight teams advanced to a day of excitement full of of shocking upsets detailed on the next page.