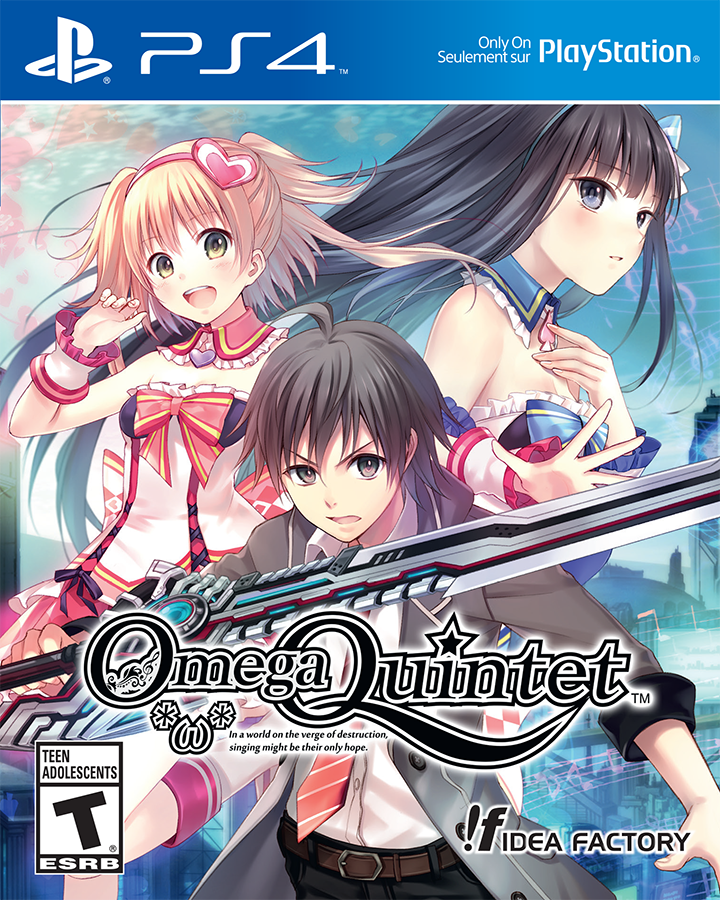 As the PlayStation 4 nears its second birthday, we’ve finally begun to see an increasing amount of awesome titles on the platform. Unfortunately, JRPG fans have been surprisingly underserved thus far when compared to the PS3. Compile Heart, a tremendously established PS3 developer and publisher, has finally made their move onto PS4 with Omega Quintet. Despite the new platform, it contains all the hallmarks of a typical Compile Heart-published game. There’s an overwhelmingly “moe” anime aesthetic, bright colors and solid battle system. The difference here is that Galapogos RPG’s tale is focused on a world where musical idols are actually superheroines. The concept of an RPG with idol sim elements is a treat, but does it flesh out both aspects to the fullest?

It really depends what you’re looking for out of Omega Quintet. First, we’re given the setup — an aging Verse Maiden is stepping down and someone needs to take her place to fight the evil Blare. A whole group of girls imbued with idol powers suddenly appear and, as such, become the next idol/monster slaying heroes for humanity to look up to. As is common for these types of games, each girl tends to fall into a certain trope. It makes for characters who are easier to relate to, but also leads to a heck of a lot of cutesy filler content. It’s a bit of a shame since a more consistently interesting storyline would make players more compelled to complete all the quests thrown at them.

For whatever reason, some folks out there believe that Omega Quintet is something of a re-skinned Hyperdimension Neptunia product. After all, in that game each cast member is basically an idol herself, just with a dollop of gaming culture on top. This is not the case. Omega Quintet offers a completely unique — and surprisingly complex — battle system. It’s so complex that you’ll be inundated with tutorial screens for much of the early and mid game. There’s a definite infusion of strategy in this JRPG, although rarely is it required to master every aspect. 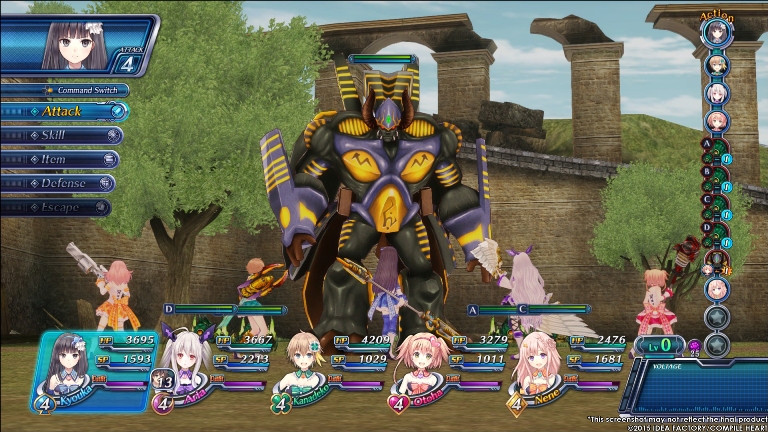 Battles are expectedly turn-based. Your team of Verse Maidens begins small, but eventually there’s a whole line up of ladies at your command. Each has their own basic attacks and special skills to use, ranging from healing to ranged attacks. A meter builds up throughout the exploration of a dungeon that unlocks a special skill once it increases enough. Beyond all this “expected” stuff, however, lies a whole other menu which relates to the cast’s idol skills. Features such as Harmonics allow multiple characters to sync their attacks in ways to unlock other special skills which are never available outside of this mode. There’s much more to battles than this, but that’s just a taste for the degree of variety at player fingertips.

Despite an impressive array of tactics which can be employed during fights, there’s only a few things everyone needs to keep in mind. The biggest aspect of battles is distance. Enemies sit themselves at a certain distance, which requires you to focus on attacks which have a strong (or at least adequate) impact at said range. Sometimes, your weapon or skill won’t even touch them if they’re not in the right spot. Keeping track of range is easy to do since colored range bands are laid out on the playfield which change with attack selection. Even if you never get everything else the game has to offer, you at least need to get this down. Considering how much grinding is required to complete Omega Quintet, it’d be pretty hard not to.

One of the weirder elements to discuss is how dungeons are gated by game progression. Each stage is absolutely massive, but at the start you can barely explore any of it. After your team levels up their special exploration abilities they’ll be able to return and knock down barriers in older levels. However, it’s not like you’re alerted to which locations now offer increased exploration abilities. You’ve simply gotta jump on in and see for yourself. Abilities themselves are tied to quests, which sometimes leads to frustration. Without the proper abilities you cannot finish other quests, which confer abilities needed for other quests, and so on. There’s a lack of clarity in defining what you need next which proves more frustrating than fun. 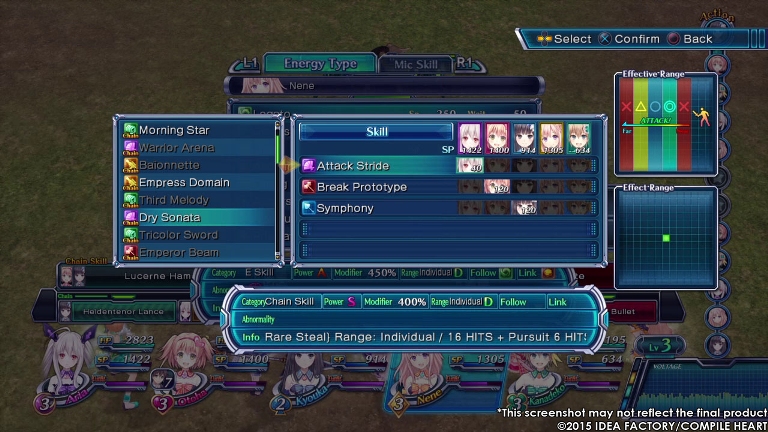 But what about the much-touted idol element? Is there more in store for folks seeking Omega Quintet on this principle? Housed sneakily alongside all this JRPG gameplay is a full on idol choreograph/video mode titled PVS (Promotional Video System). In PVS mode you get access to a complex video editor that allows every element of a performance to be tweaked. Select the song, the performers, and what moves they’ll perform. Then go forth and tweak exactly how the camera will pan and when, as well as which Verse Maidens it’ll focus on for each scene. Considering some Japan-exclusive games are primarily about video editing and choreography, there’s no doubt in my mind that some folks will grow addicted to PVS mode. It’s fully-featured in a way that is weird (since some players may never even discover the mode), but wonderful for simulation fans.

Outside of the powerful PVS editor, it’s hard to discern why exactly Omega Quintet is on PS4. This is the issue so many Compile Heart games run across. They’ve never pushed powerhouse graphics because it simply isn’t necessary. Anyone looking for a superb visual experience will not find it here. Verse Maidens wear wonderfully bright and detailed outfits, but nothing else in the game is given as much attention. Levels are outrageously dull, and sometimes, downright ugly. Monsters fare somewhere in the middle with a handful of cool designs among more stereotypical enemy types. 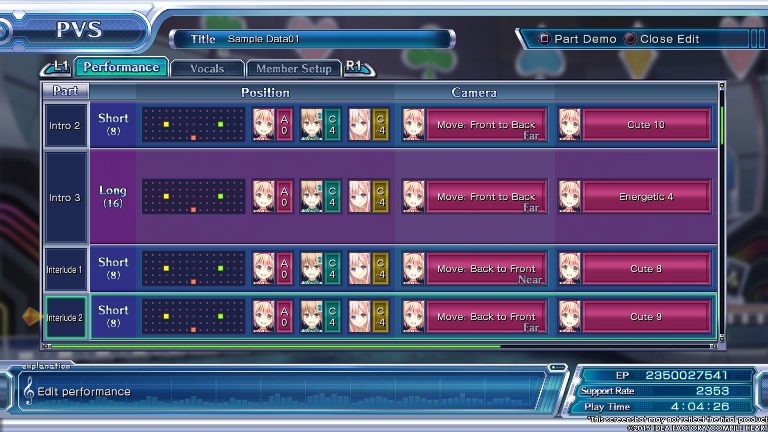 Omega Quintet is a game at battle with itself. On one end, its multifaceted battle system has the potential to make JRPG fans drool. The same is true of the excellent PVS editor which will satisfy fans waiting for anything of this sort to make its way west. On the other hand, its graphics in no way push the PS4 (and some aspects look downright ancient) and all this complexity seems to be at the cost of an awesome storyline. It’s cute and lighthearted, but at some point you want to see something actually happen instead of just listening to characters babble about nothing. Omega Quintet will be best enjoyed by those who know exactly what they want out of the game. The comprehensive battle system and simulation are well-executed and unique, even if the rest of the experience offers only wobbly support for them.