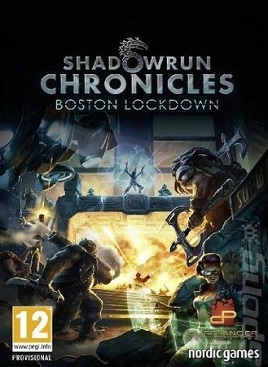 Shadowrun is one of those settings that is so incredibly complex, with an enormous amount of lore and supplemental materials to its core games, that it can be extremely inaccessible to those not entirely familiar with the franchise. While Shadowrun: Returns as well as its sequel, Dragonfall, were magical roleplaying experiences, they still presented a barrier of sorts for those unfamiliar with the series. Knowing this, developer Cliffhanger Productions have taken a slightly different approach with the gritty, cyberpunk IP, giving way to Shadowrun Chronicles — Boston Lockdown, an online tactical-RPG with streamlined sensibilities in mind. But as we know, making one’s project appeal to a broader audience can be a slippery slope; too far in one direction, and the base demographic abandons the product entirely, and yet too catering to longtime veterans fails to bring in newcomers and grow the product. The question, then, becomes how does Chronicles fair in this department? Does it follow Returns’ fantastic success, or does it fail to live up to the hype now set by the unrelated, yet hard-to-not-compare work from Harebrained Schemes?

Shadowrun Chronicles — Boston Lockdown starts off with players making their character from an array of choices that allow them to customize their clothes, face, hair and the typical sliders of user appearance options. This is an integral part of the experience as Chronicles is technically an online-centric game. Therefore, choosing one’s presentation via articles of clothing, and that much desired hairdoo, are chief among players’ priorities. Unfortunately, the game doesn’t provide all that many opprunities to outfit one’s character to the fullest. There are only a handful of clothing assortments to start off with, along with other markings that designate a player’s character as their own. More options become available as progress is made in the game itself, but those fundamental choices are indeed slim pickens. Nevertheless, once folks’ avatars have been outfitted appropriately, they are whisked away to Chronicles‘ hub-town.

Think of Boston Lockdown as a sort of Phantasy Star Online (or perhaps Destiny is a more recent parallel) in that there’s a central hub-world that contains all the necessities of play. The ability to upgrade one’s skills, armor, weapons and the like are all present and accounted for in this nucleus, as are NPCs who help flesh out the state of affairs in Shadowrun’s world. The story also mostly takes place in these hubs as quest-givers and prominent story-characters are hanging around with which to chat. Speaking of such, the narrative in Chronicles is a strong part of its offerings. For the sake of spoilers, we’ll just lay out the premise. The player wakes up in a strange medical facility where s/he is about to receive an unwanted operation. After recognizing this, and thereby effectively eliminating the doctors in question, the player is guided to safety thanks to a soon-revealed comrade. From there, it’s disclosed that the player is indeed a Runner, and an amnesiac at that, and is looking not just for answers as to why they woke up on an operating table in the manner that he did, but to make some coin in the process as well. 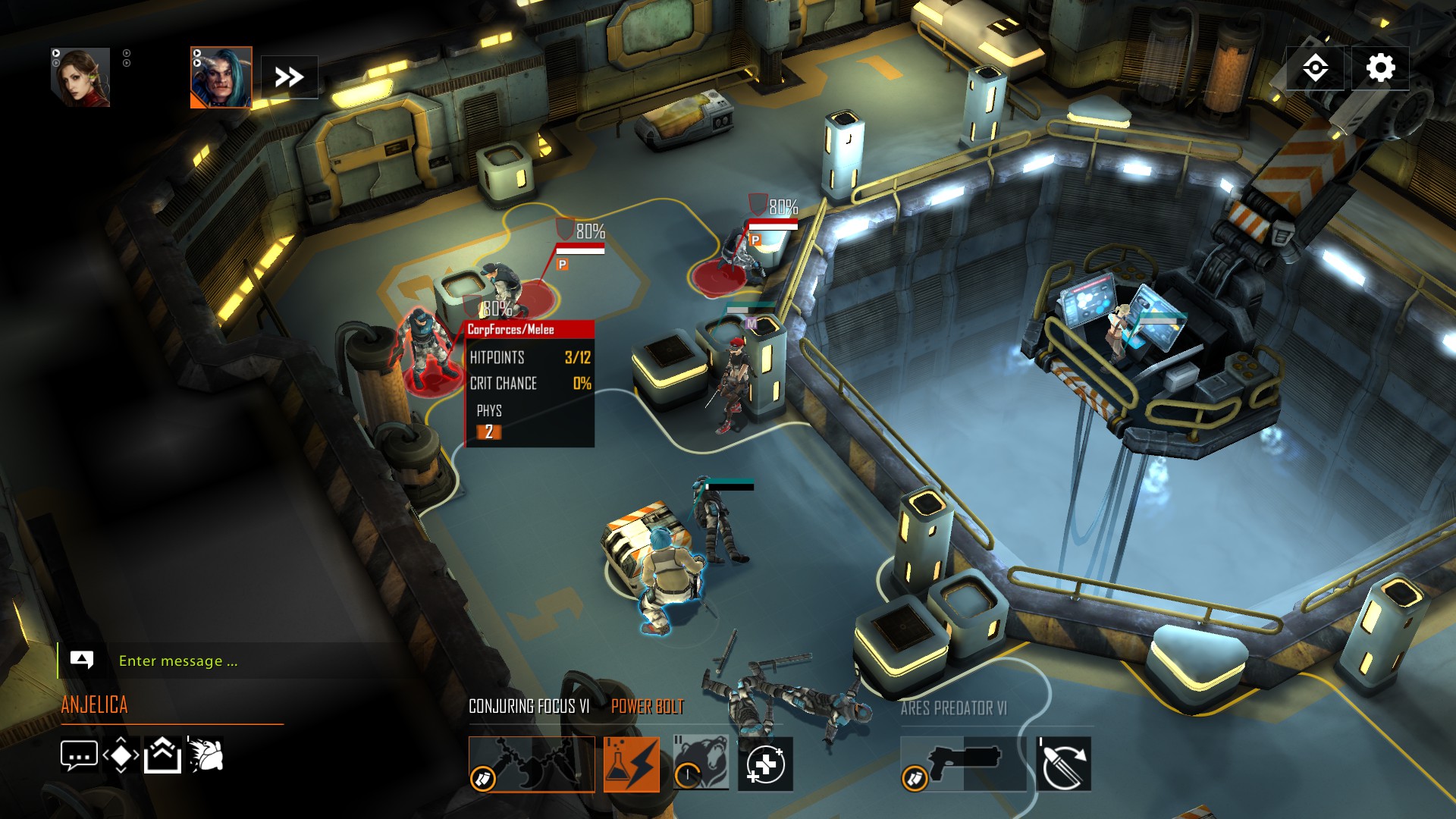 Shadowrun Chronicles‘ story is one of its strongest assets; not just the overall plot, but how the tale is delivered. Quality story angles, voice acting and dialgoue all come together to form a fantastic narrative that is at the center of Chronicles’ experience. Those showing up looking for a sound story will not be dissatisfied here, though we should note that the writing isn’t anywhere near the caliber of Harebrained Schemes’ series — that stuff is the work of masterful storytellers. It’s not as intricate and hard-hitting as Shadowrun: Dragonfall, but that doesn’t discount the level of writing on display. It’s surprising to find an MMO-lite, like this one, that is able to forge a world and a central plot that is actually interesting to the point that the player does not want to just skip through all the dialogue to get to the action. Cliffhanger Productions should be proud that they have managed to accomplish such a feat, where others developers usually come up short.

This is not just about a good narrative, though. Boston Lockdown has worthwhile gameplay to boot. In essence, Shadowrun Chronicles is an isometric tactical-RPG that plays out very similarly to X-COM. Players take on missions, traverse maps, account for movement and action points, dish out pain to baddies and acquire new skills and talents along the way. This sequence is tried and true, therefore rarely falterting throughout Chronicles‘ adventure. There’s a great deal of depth in this somewhat basic formula, as positioning and a good helping of fore-thought are essential to making it out alive. Making it out alive won’t come easily either, since Chronicles is a challenging game. It’s not Bloodborne-hard, but it will show players its figurative game over screen many, many times. 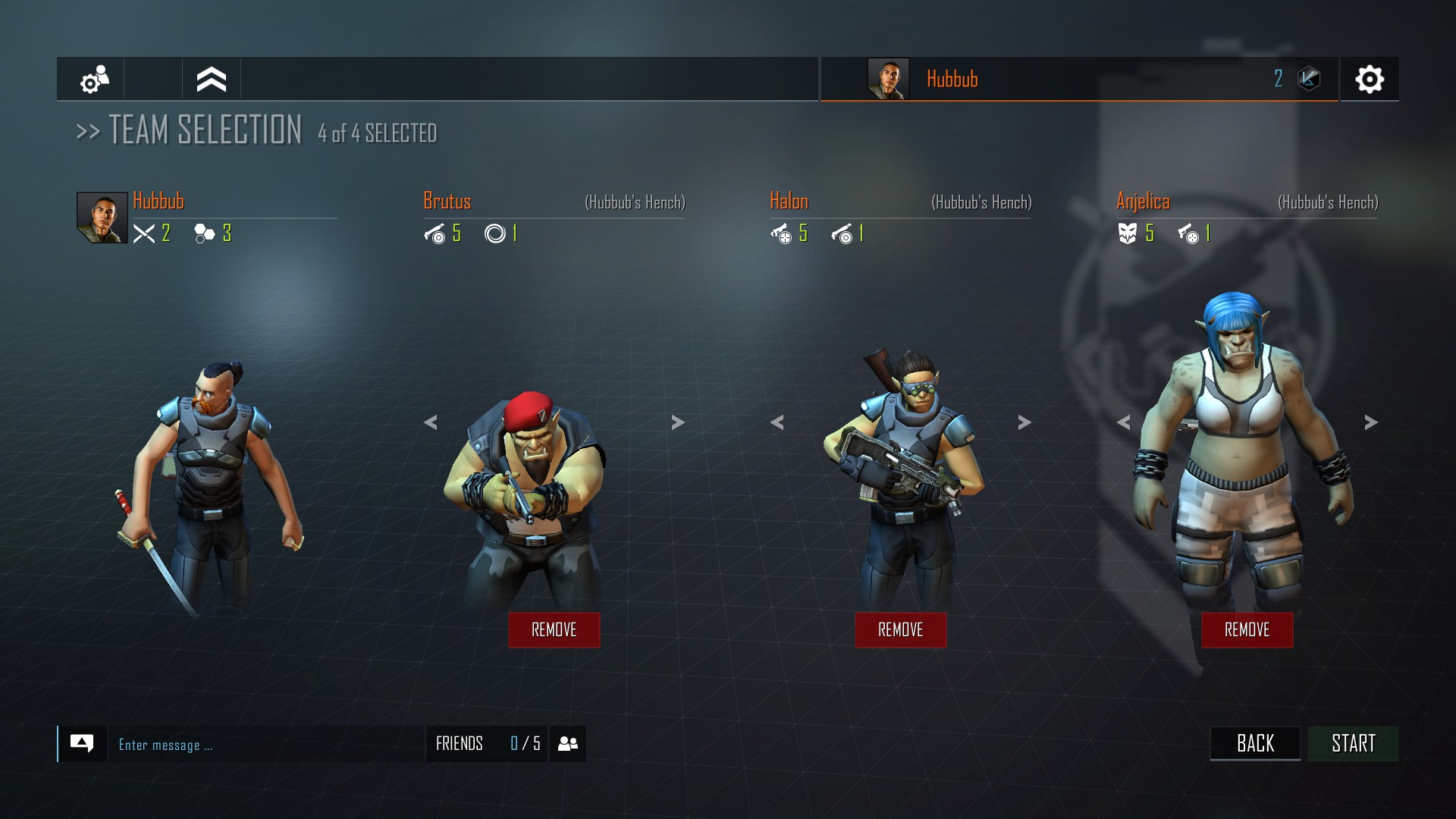 Nevertheless, like the level of polish seen in its prose, Boston Lockdown has really competent combat mechanics. Though we wish that each encounter/mission didn’t come down to battling. Part of what makes Shadowrun special is the ability to complete objectives by not resorting to fisticuffs. It’s a shame this hasn’t been implemented yet (if it ever will be, despite some indications that it’s a possibility). At least the amount of ways to dispatch enemies in battle is varied and super gratifying. Guns, swords, magic, summons… these are just some of the ways to divvy out death in Chronicles. And knowing who to take into battle, and which AI-controlled henchman has the right skills for the job is part of the process. In fact, the wrong combination of teammates, and a mission is certain to be an outright disaster. This level of strategy is wonderful, and rewards a sound tactical mind.

Where Chronicles doesn’t feel as satisfying is in its skill trees. In fact, there are only 11 trees at the moment, and from that, each features somewhere in the ballpark of 13 to 20 skills each. Sure, there’s plenty to keep folks interested; but a lot of the skills are merely advanced iterations of another, so suddenly the total number shrinks considerably. This in turn keeps folks from building their exact prototype. We often found ourselves having to rework our idea of a Runner based on what was available to us. This was probably meant to streamline the process and not get players bogged down in number crunching skills. But the flipside of this design choice is a somewhat shallow experience when it comes to character customization. We’re not sure if that’s a trade-off we’d be willing to make if this were our game. At least as time goes on, and players earn new money and find loot, they open up a lot of appearance options which serves to set themselves apart from the rest of the players. 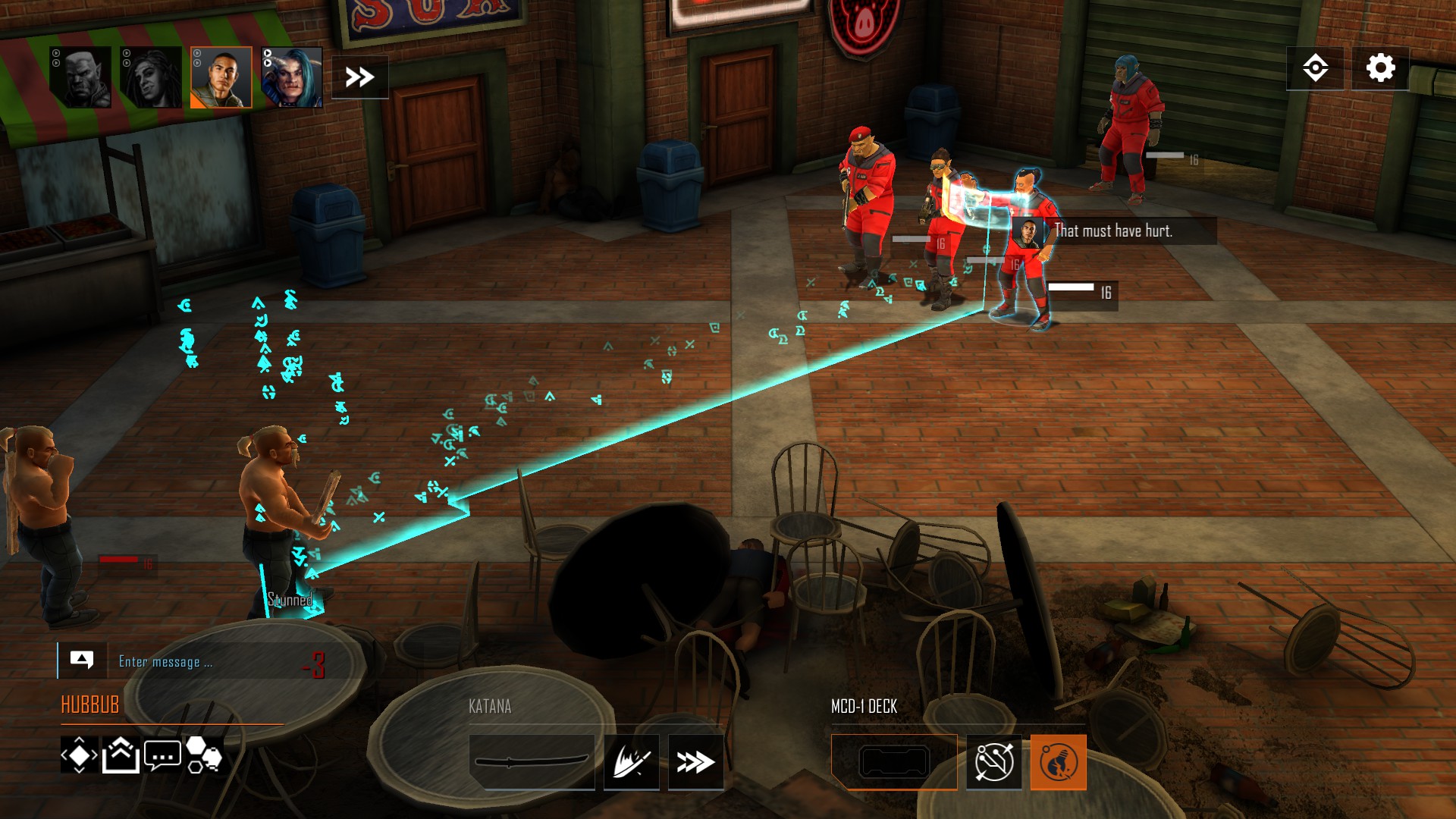 As of now though, that’s all there is to Shadowrun Chronicles. It will be expanded upon in the future in terms of sheer content, but what’s there right now is somewhat thin. It’s pretty good stuff, yes, but it’s not exorbitantly abundant. It’s also terribly cyclical where in players take a mission, go kill things, come back to town, buy stuff… rinse, repeat. Fortunately, this is an online game. So the real fun will be in running 4-player cooperative missions. These went off without much of a hitch in our play sessions, and felt like the ideal ways to play Boston Lockdown. Coming back from a challenging mission, and running around the hub-town with friends was very reminiscent of the aforesaid PSO or Destiny.

Lastly, we weren’t big fans of Chronicles‘ interface. It’s come a long way since early access, but it still has a ways to go if it hopes to be taken as a top-notch game. As of now, it looks like a game still in beta, and yet it’s not a game still in beta. Coming off the heels of Shadowrun: Dragonfall, which had a beautiful HUD and menu system easily navigated, Boston Lockdown needed to deliver in this area. Alas, it has not. I believe it will in time, but what’s in place currently feels barebones and uninspired. The same can be said for the soundtrack. It’s there, and it’s far from bad, but it lacks diversity and the depth of an OST one would expect from an RPG.

Thankfully the aural fidelity is enhanced by some really quality voice acting. The game’s not totally dubbed, but there’s a great bit of it, and all the important parts are. Each character feels different from the other and a lot of this is due to the actors’ performances that emphasize cultural inflection, vernacular and proclivities. Speaking of presentation, the game’s performance is pretty buttery smooth. Though it should be due to the lack of great graphical prowess on display. Everything here is somewhat simple, lacking in texture and strikingly round-y. There’s no real performance improvements to make either, as the settings menu is about as basic as it comes — no advanced visual options whatsoever. Nevertheless, the framerate being so silky is worth the sacrifice. 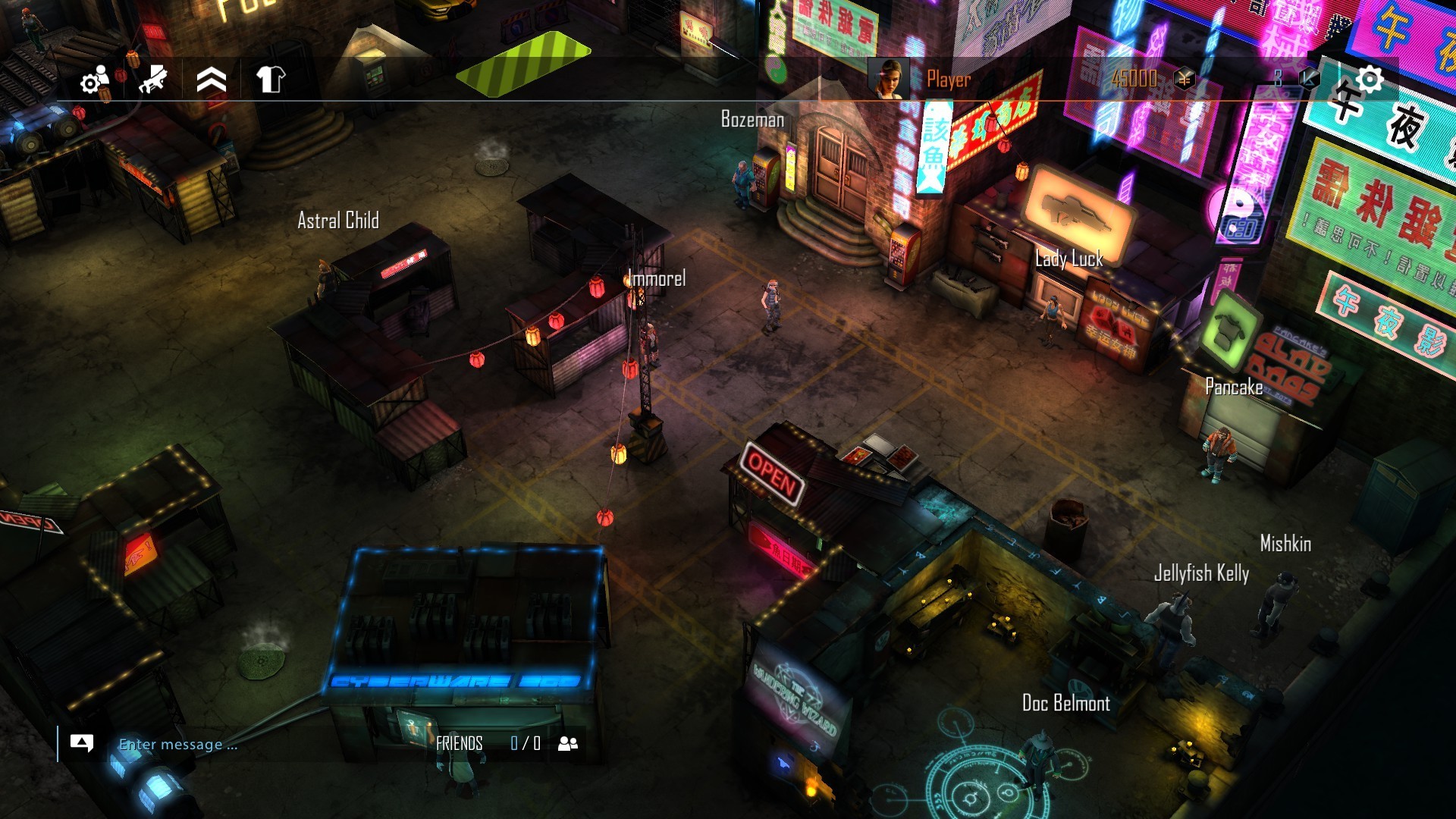 In its current state, Shadowrun Chronicles — Boston Lockdown is a perfectly adequate game. It has loads of potential, but needs more time in the oven to feel complete and worthy of your time. Its combat and story are its highlights, with the voice acting and online implementation mostly hitting the mark as well. It doesn’t deliver, however, in its customization options, interface, soundtrack and lack of overall content. Those who like Shadowrun or turn-based RPGs should still give Boston Lockdown a look, but anybody else need not apply.