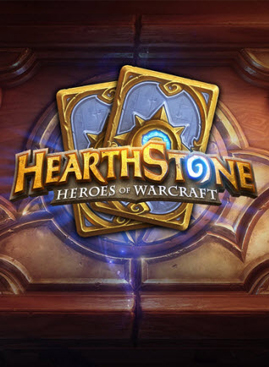 I’ve said it before, and I’ll say it again: Hearthstone is the best value in collectible card gaming. Where it can cost upwards of a thousand dollars to build a competitive deck in Magic: The Gathering or Yu-Gi-Oh!, Blizzard’s digital CCG lets you build a viable tier-1 deck for less than sixty – or about a month of solid work if you insist on playing for free. Not only that, but the game’s dev team is constantly rolling out new content. Hearthstone’s first year saw a full-fledged expansion in Goblins Vs. Gnomes that completely changed the metagame with over a hundred new cards, and between the game’s launch and the expansion we were treated to Curse of Naxxramas, a story-driven adventure with 30 cards on the line. Naxx was brilliant, both in terms of concept and execution, and it left fans clamoring for more. Now, a year after the game first hit the internet, we have a chance to plunge into Blackrock Mountain and win cards from infamous World of Warcraft baddies like Nefarian and Ragnaros.

Like Curse of Naxxramas, Blackrock Mountain presents a series of boss encounters based on raids from the glory days of WoW. The difference is that while Naxx was based on a single huge raid, Blackrock Mountain draws inspiration from two five-player dungeons and two 40-man raids from Vanilla WoW, along with one 25 player raid from Cataclysm. Strung together, these raids tell the story of the evil dragon Nefarian’s war with Ragnaros the fire lord for dominion over the mountain. This story is told with the tongue-in-cheek humor we’ve come to expect of Hearthstone’s adventures.

The Adventure’s five wings were released over the course of five weeks, and each is unique and enjoyable in its own way. The first wing sees you take on the dark iron dwarves, first in a rowdy pub brawl against the Grim Guzzler and all his friends, then in a chaotic fight in the Dark Iron Arena against all of the game’s Legendaries (each with their own signature dialogue from the announcer). The second wing pits you against Ragnaros and his elemental lieutenants, all of whom wield explosively powerful cards and hero abilities. Through all of this Nefarian eggs you on, but once Ragnaros is taken care of you turn on the dragons and orcs that serve his armies. That upsets him a little.

Nefarian is a really great villain – even better than Naxx’s delightfully wicked Kel’thuzad – and his quips before each battle are almost guaranteed to make you laugh. But it’s not just him that makes the adventure work – almost all of the bosses are full-fledged characters in their own right, conveying an abundance of personality in what amounts to just a few incidental lines and taunts. Even better, Nefarian banters with some of them as you fight through each wing, mocking the forces of Ragnaros and even changing your username to reflect your accomplishments. The third wing, Blackrock Spire, is definitely the highlight in terms of humor, with Nefarian’s general Drakkisath pleading “Why?! Tell me why! Please, I liked you.” It would break my heart if they weren’t so evil. 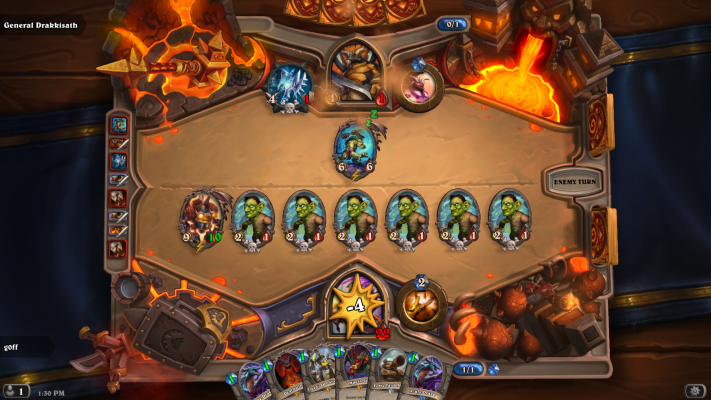 Unfortunately, not all of the fights are as fun as they are funny. Most of the minor bosses utilize fun mechanics, but the major encounters at the end of each wing largely rely on staged transformations: to fight Ragnaros you have to go through Majordomo Executus, Rend Blackhand’s hero power changes every time he uses it, and during the final fight with Nefarian he’s temporarily replaced by his sister, Onyxia. Raid bosses tend to be endurance tests, so these mechanics make sense, but they’re not nearly as fun to play around with as the one-mana limit of Drakkisath or the insane mill capabilities of Vaelastrasz. Only one of the final boss fights – the first round against Nefarian in Blackwing Lair – is particularly entertaining, as Ragnaros shows up to give you a hand by slipping you powerful 0-cost minions each turn.

On the flip side, the more fun bosses are also kind of pushovers. Most players should be able to breeze through the normal mode fights so long as they don’t use a deck that actively helps a boss. Likewise, the class challenges (where you must use a special deck to earn a class-specific card) are a walk in the park, with most decks literally stacked in your favor. Naxx was like this too, but at least there Heroic mode provided a real challenge. In Blackrock Mountain most of the heroic bosses can be beaten in one or two tries, and while the bosses of the last two wings put up more of a fight, they’re not nearly as threatening as Kel’Thuzad’s best minions. As a result, the Nefarian card back probably won’t be quite the mark of honor that the Heroic Naxxramas one is. 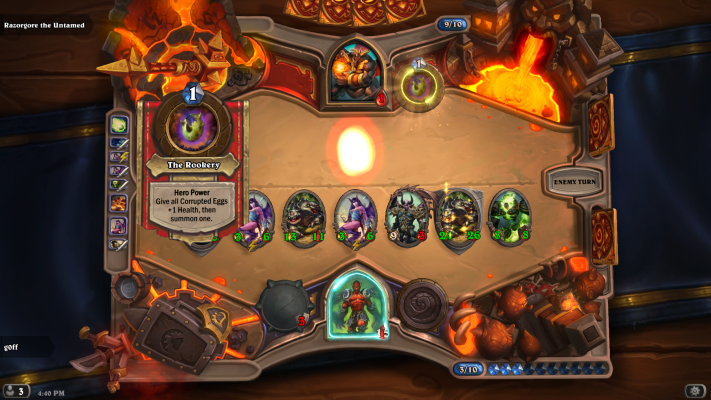 Of course, this expansion isn’t just about single-player content – it also introduces 31 new cards to players’ deckbuilding pools. 18 of these are class-specific (one minion and one spell for each class), while 8 are neutral commons or rares (a mostly meaningless distinction for soulbound cards that only impacts their likelihood to show up in Arena), and five are Legendaries representing the end bosses of each wing. Of these cards, most have their niche uses, but 10 stand out as being exceptionally powerful.

From the neutral cards, Emperor Thaurissan’s cost-reduction ability enables some truly insane plays, and has become an instant staple of just about every ramp, control, and combo deck out there. Grim Patron’s ability to multiply when damaged likewise enables some amazing combos for warrior decks, and on his own he can make your board nearly impossible to clear for any deck but mage or priest. Hungry Dragon is quite possibly the best 4-drop in the game, with a downside that’s very easy to mitigate or even turn to your advantage. Blackwing Technician’s 3/5 stats when you play her with a dragon in-hand should likewise make her a strong contender for best 3-drop, but the new Warlock card blows everything else in the slot out of the water. 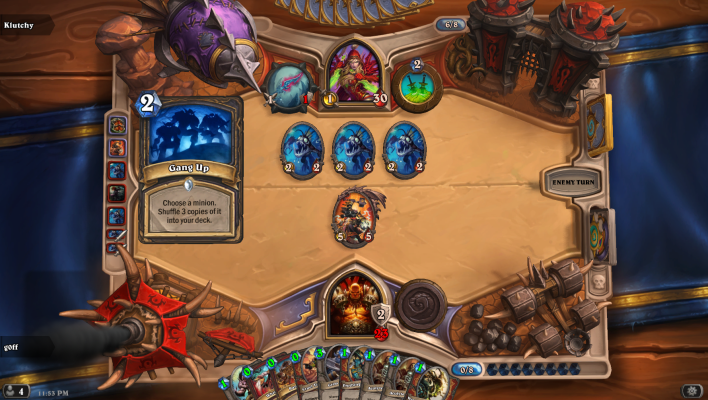 Imp Gang Boss has single-handedly revived Zoo. 2 attack and 4 toughness for 3 mana is pretty great for board control already, but Gang Boss summons a free 1/1 imp every time he’s damaged, which makes him even stickier and more versatile than the other top contender, Harvest Golem. As a demon he’s a great fit for the newly viable midrange demonlock decks, which also benefit from Demonwrath, a 3-mana consecrate that activates your own Nerubian Eggs. Blizzard always has to be careful not to make Warlock class cards too powerful, since the class’ hero power creates instant card advantage, and these two definitely push it.

Paladin has a pretty insane tool of its own in Dragon Consort, a 5-drop with a battlecry that reduces the cost of the next Dragon you play by two. Before this card was revealed there were concerns about dragon decks being two slow – since most pre-Blackrock dragon cards are 8 or 9 mana legendaries – but consort facilitates some pretty crazy plays. Dropping Hungry Dragon or Azure Drake for two or three mana is an insane tempo swing that can easily win games, and getting out Alexstraza or Ysera on turn 7 can spell instant victory. Dragon decks are still relatively slow, but Blackwing Technician and Hungry Dragon provide enough value and tempo that I can see them topping in a format less dominated by face hunter. 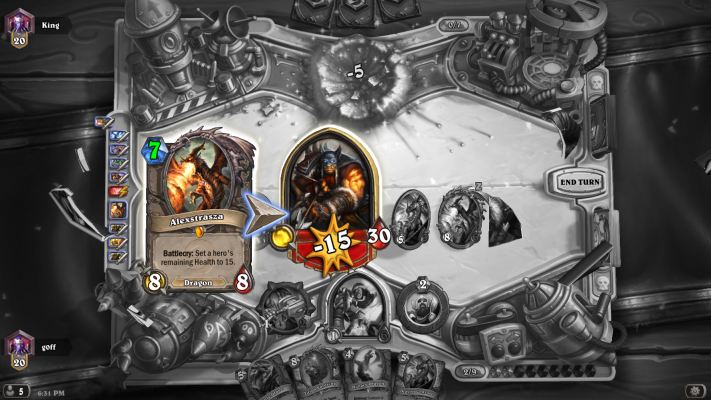 Speaking of Hunters, they received an infuriating boost thanks to Quick Shot, a spell identical to the Warlock’s darkbomb save for the fact that it also draws for you when it’s the last card in your hand. Prior to Blackrock the major weakness of hunter decks was their tendency to fall into top-decking scenarios, but with Quick Shot an empty hand and board can turn into an instant win against any player with less than 10 health.  Shamans have also had some of their weaknesses patched up, in particular their ability to stabilize in the mid-game. Fireguard Destroyer has a 50% chance of offering better value than Hungry Dragon with a relatively minor downside, and that problem can be eradicated immediately with Lava Shock, which frees up overloaded Mana Crystals after shamans make crazy high-tempo plays

No deck utilizes those cards quite as well as the new Rogue Mill variants powered by Gang Up. Gang Up is technically one of those niche cards, but it’s so powerful for what it does that it’s my personal favorite card of the set. By shuffling three copies of any minion into your deck, Gang Up enables you to stack up to 8 uses of Coldlight Oracle (more with Shadowstep and Vanish) – forcing your opponent to draw 20 cards – while simultaneously giving you a 6 draw buffer against fatigue damage. It’s also versatile, since you can copy Sludge Belcher and Antique Healbot instead when you run into face hunter. The deck runs even faster than the Mill Mage and Druid variants enabled by GvG, though as a trade-off its board-clearing and stalling capabilities aren’t quite as strong. It’s encouraging to see these alternate win conditions emerge as Hearthstone grows, since they indicate the game is increasing in depth, not just complexity. 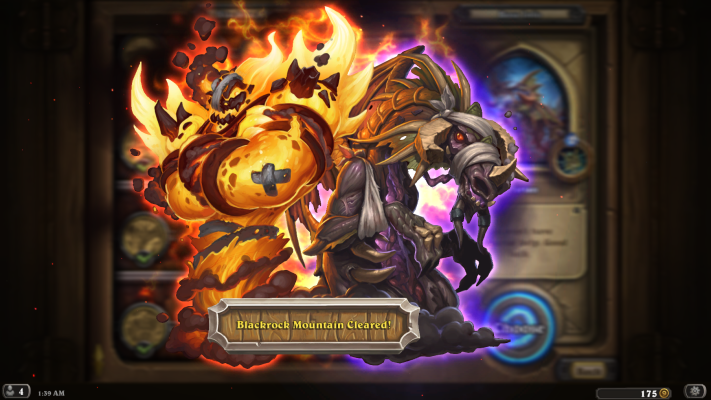 As a single-player campaign, Blackrock Mountain isn’t quite as well-tuned as Curse of Naxxramas, but it makes up for that shortcoming by somehow being even funnier. It proves that Naxx wasn’t a fluke – these adventures aren’t just convoluted card-delivery systems, they’re legitimately fun experiences in their own right. For what it’s worth, though, the cards delivered are great, opening up exciting new strategies while giving mainstay decks the boost they need to stay relevant. There are hints here and there of power creep, but by and large Blizzard has once again managed to mix things up without ruining the impeccable balance that makes Hearthstone so enduring.