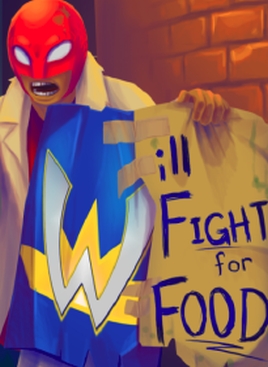 Will Fight For Food

Sometimes, stepping out your comfort zone is a good thing. Sure, it’s not the cushy bed you’ve come to know and expect — but it can be better. You might wind up with a mint on your pillow, or even a fresh new set of sheets. That won’t be happening here, though. In Will Fight for Food Super Actual Sellout: Game of the Hour, you’re playing a combination RPG/point and click game as an ex-WFF wrestler who has a nasty case of “I’ve forgotten my life and need to walk and talk to figure it out”. It’s damn near an epidemic in narrative fiction, and someone should really invent some kind of note-taking device to help people chronicle their lives.

Something like a notepad, for example. Oh wait — this game has one of those, and it comes in quite handy. Like any point and click game, you’ll encounter many people. Unlike most of them though, here you can just kick ass and maybe take names if you so desire. If you want to help a friend prevent an evil group from taking over a forest for a parking lot, you’ll need to jot things down and refer to them. Fortunately, the game does the former for you and doing the latter is as simple as a mouse click.

You might think that preventing the destruction of a forest would be a civil matter full of paperwork and long dialogue exchange. In same games, sure — but not here. Solving that riddle doesn’t require a ballpoint banana, just a keen sense for exploration. You’ll talk to people, then encounter a relatively bizarre group of people who dress up like bears and other animals to scare the locals away. Initially, they’re friendly, with one even asking for helping finding his missing suit paw. Then, when you talk about bringing down they’re little sub-culture, they get strangely defensive.

All you’re doing is trying to get to the bottom of a mystery, and these fur-wearing goofballs take offense! Luckily, a quick press of the Z, X, and/or C keys in rapid succession will take them out. The big key is to hit the spacebar to swap into battle mode. Since you’re an ex-wrestler, this is of course done by putting a razor-thin disguise on over your face. You may not quite be the Midnight Rider, Mr. America, or even the Yellow Dog, but you will have some facial protection and be able to unleash holy Hell on anyone who dares cross your path. Other than trying to turn with slightly unresponsive arrow controls, this setup works perfectly. 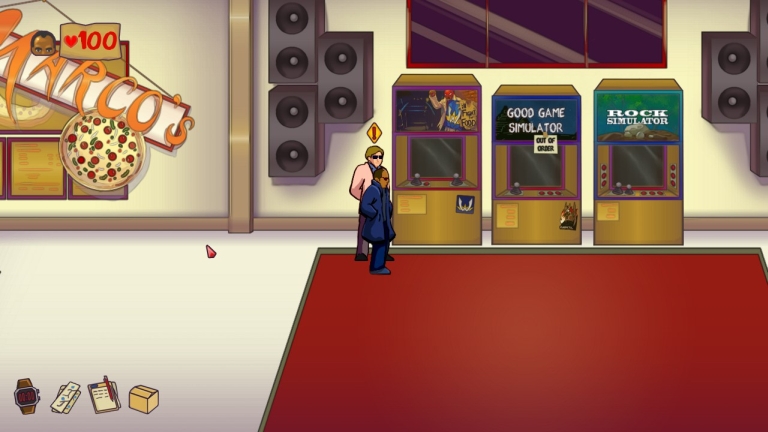 The RPG aspect of things comes into play with your full-fledged navigation using arrows and like a lot of better RPGs, you can choose to engage in combat or avoid it. There are some humorous issues that can come about from combat that have nothing to do with the dialogue trees that precede it. When you leave an area that has fallen enemies and then come back to it, the screen will show everyone in their pre-beating positions. It’s a cute little thing that probably isn’t intentional, but does add a bit of comedy to things and makes the game almost come off like a stage play. It’s a happy accident as a result.

Will Fight For Food does an admirable job of blending the best parts of RPGs with brawlers and point and click games. You’ve got the fast action of a brawler – even if this is one of the easier and loosest-controlling ones out there, along with RPG-style exploration of a world and the interface of and interrogation features of a point and click game. Here, you have a wide variety of options for dialogue trees that keep conversations interesting. If you get an unsatisfactory result with your body language choice, try again with the same tone and see if you get a more favorable result. You’re given personality traits and context to help you out, but like taking the temperature of a room for a gathering, it can be tricky. 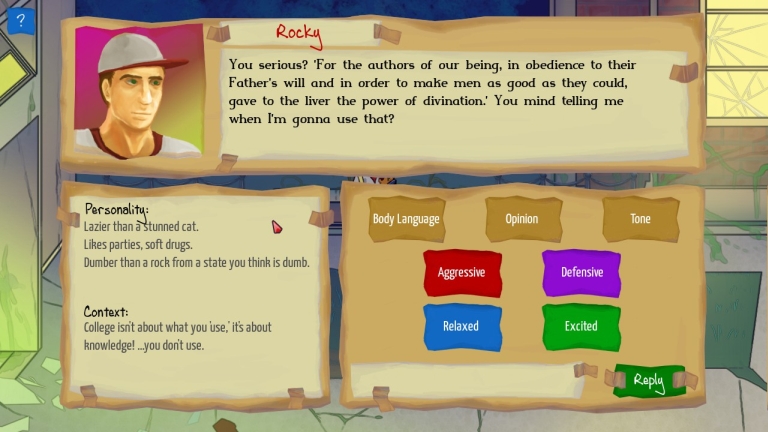 The game never gets too frustrating though. Other than some aimless portions, you’re generally kept on a reasonably-sized leash in terms of placed to go and options to exhaust to move the plot along. There’s a definite lack of polish to the game at times that doesn’t work its favor though. You can get to the edge of a screen and find that you can’t attack. The end result is that you’re kind of stuck where you’re at and need to move around to fix the problem. It’s no huge deal since enemies also can’t move and attack either, but it’s something that hurts the game slightly.

Visually, it’s a simple-looking game, but it is pleasing to the eyes. Colors and bright and animation is just the right kind of limited. It’s fluid enough to look realistic, but not too realistic to take up time and that is in like with 16-bit style brawlers too. This approach means it’s much easier to time attacks and progress through battles. The character variety is hit or miss, with a reasonable amount of options for major NPCs, while a lot of generic ones fill slots as well. It doesn’t break much new ground, but the idea of fighting men dressed as bears was pretty inspired, and an early highlight that showcases the game’s bizarre sense of humor nicely.

There’s no voice work, but for a low-budget game, that’s not a surprise. It’s also beneficial since it lets you imagine the voices, and that can add some comedy. Musically, it goes from a Peter Gunn/detective show style when you’re just walking around to almost an action movie during combat. It’s a stark contrast, but one that works really well. The sound effects for attacks aren’t all that memorable though — and they lack impact. Otherwise, this is as a fun a game to hear as it is to play. 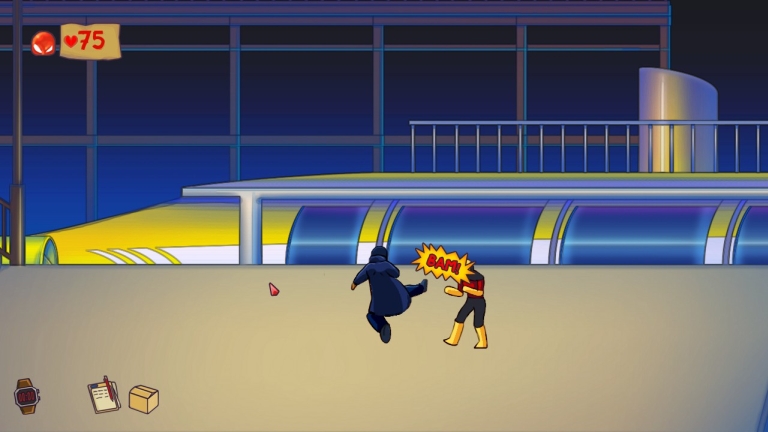 Will Fight For Food is a charming mix of an RPG, a point and click adventure and a belt-scrolling brawler. The genre blend is bizarre, but works well. The game’s sense of humor is just a bit askew, but always gets a chuckle. Anyone with a love for the absurd and/or any of the genres it contains should try it out. With a rock-bottom price tag of $5, it’s impossible to avoid getting your money’s worth out of it.