With the recent launch of a Kickstarter for a new game that is already exceptionally well known, it seems like the perfect time to look back on the Toejam and Earl franchise. It was very much a product of its time with a bright early ’90s world full of seemingly random color choices that might make people wonder just what drugs folks were on when they were making it. Rest assured folks, that was a style at the time — just look at any episode of the Fresh Prince of Bel-Air and you’ll see everyone in bright neon orange and green. ’90s kids did not, however, wear onions on our belts. We wore fanny packs. Toejam and Earl didn’t, though. They had hi-top sneakers, which next to shoes with lights on the back, were the absolute coolest things ever until rollerblades got big.

Toejam and Earl are two funkatronians out to explore the world, but their ship crash lands and they need to rebuild it part by part. Unfortunately, there are all of these earthlings running around getting in their way. You can dash past them with your funky-fresh hi-tops or incur their wrath. The game was completely unlike anything on the market at the time. With platformers and fighting games all the rage, TJ and E  had a largely passive experience that rewarded exploration and using the proper strategy for the situation. Do you run past enemies and run down your boost or do you try and sneak past them? One is a sure-fire way to succeed, while the other is slower and naturally a bit less exciting (although still visually interesting due to the smooth animation). 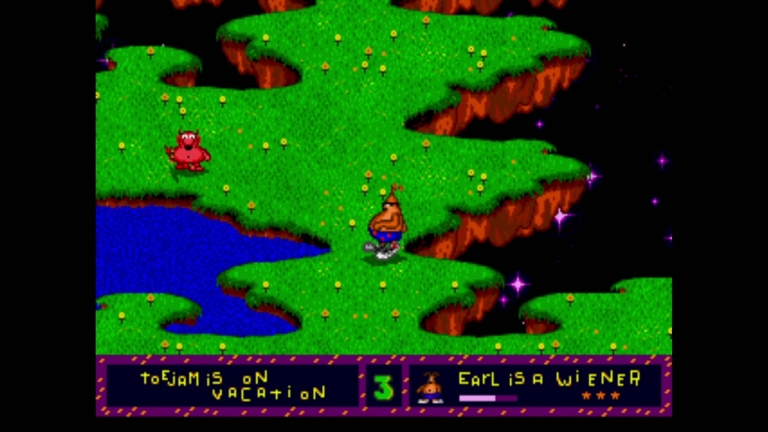 Whether you’re running around or sneaking, you’ll see lush animation for everything. Given that this wasn’t a big-budget game, that was a bit of a rarity. The slightly-overhead perspective was also unusual — as was everything about the gameplay. You have occasional weapons and a floor-based structure to stages. Instead of staircases, you go up elevators, and you need to collect as many presents as possible to gain at least a short-term edge with the power-ups contained within them. With the rise of Roguelikes and Roguelites out there, Toejam and Earl was many years ahead of its time. The original punished you with failure by having you go through a whole floor again, and that could eat up time since you need perfect timing to get past enemies.

Toejam and Earl returned in 1993 with something completely different. Instead of a free-roaming collectathon, you now collected things in a 2D platformer. Panic on Funkatron begins with earthlings clinging to the side of the duo’s ship and they’re now disturbing the populous by singing poorly and generally being annoying in as many ways as humanly possible. They’ll get in your way, but you still need to find each one of them — keeping the collecting aspect from the first game alive. The elevators that once took from you floor to floor now send you to bonus rounds with a weird, yet beautiful, art style. 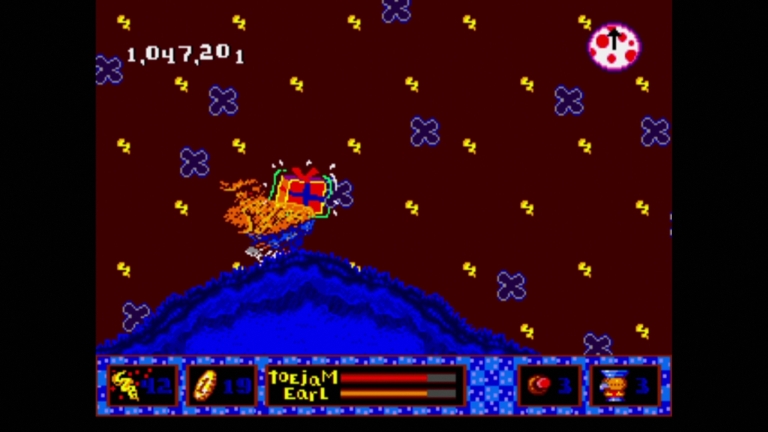 The hyperfunk zones are effectively endless runners, so they’ve aged quite well. You can go basically hollow to get through electrified gates, but your main objective is to gather as many gifts as you can before reaching the exit. Traditional platform follies like falling into water now send you underwater where you can find people and gifts. These sections control kind of oddly as you don’t have any momentum from just moving around. Instead, you have to use the jump button to move around in tandem with a d-pad direction. It’s strange at first, but doesn’t have too great a learning curve to it. For those looking for a weird game that keeps the original’s sense of humor alive, but in a more accessible form, check out Panic on Funkatron — although with both games readily available as a bundle on the PS3 and Xbox 360, you can easily play each of them back to back and decide which one you prefer.

The third entry had quite the turbulent development cycle. Originally developed for the Dreamcast, Toejam and Earl III was shelved despite the project being completely playable. Many years after the fact, a playable build of the Dreamcast game was released online in 2013 and you can play it either on your Dreamcast or via an emulator like NullDC. Sadly, it doesn’t yet run on Reicast. The project was shifted to the original Xbox, which in many felt like a successor to the Dreamcast. Beyond rumors of a DC emulator being discussed for it, Sega released a lot of top-shelf content for it including exclusives like Jet Set Radio Future, Shenmue II, and Panzer Dragoon Orta. While the PS2 had a lot of Sega-published fare, the Xbox was the best console to play them on with Outrun 2 and Outrun 2006: Coast to Coast shining brightly on there compared to being a jaggy mess on the PS2. 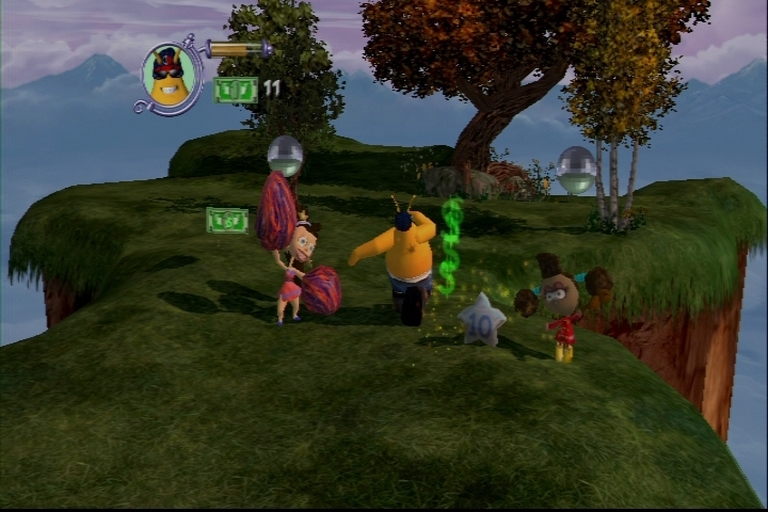 With Toejam and Earl III, the decision was made to add DLC (which is actually noted right on the case), and a third playable character – Latisha. She diversifies the lineup a bit, but doesn’t stand out nearly as much as the original two characters. She’s a generic blue alien with a human form and looks like a design created by a committee instead of the completely unique looks TJ and Earl had. It’s quite telling that she wasn’t even billed on the title or subtitle, but of course, she’s front and center on the cover. Toejam and Earl 3 plays a lot like the original, but adds in a melee attack to stun enemies while the black button nets you some extra coins. Keys have been hidden around each stage and the more you find, the more you can unlock via the all-new hub world.

TJ and E III stays true to the formula that made the first game stand out, while its early ’90s sensibilities were toned down quite a bit. The bright color scheme is gone and that does allow the game to shine in ways that go far beyond nostalgia. The on-screen antics are still amusing and since they changed things with the times, it doesn’t come off like a game that could’ve been from a bygone era had the technology allowed it to exist. The addition of a hub world is nice, since you can explore and get money for the DLC, but it comes off as padding the game out a bit as well. The hub world was only in the Xbox version and isn’t present in the DC beta release. Sadly, the game is not playable on the Xbox 360, so you will need an original Xbox to play the game. Surprisingly, even with the first two games getting a release on both last-gen platforms, this didn’t even get a digital release on a storefront. 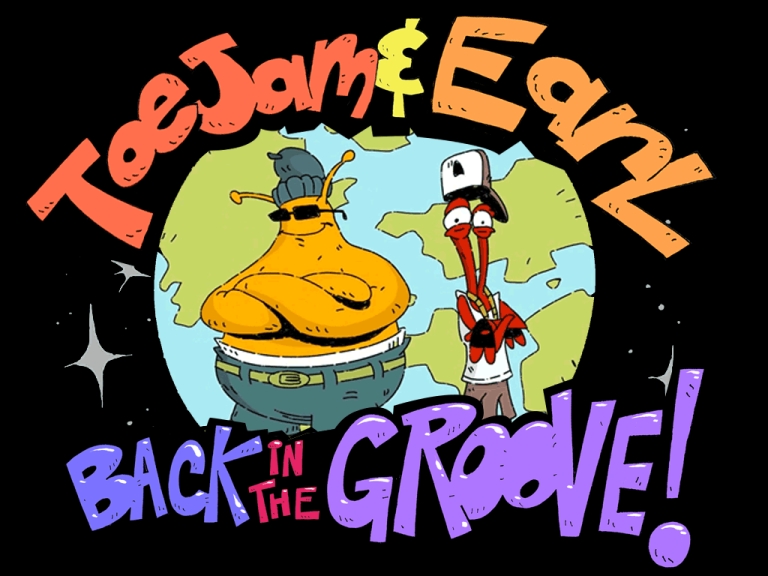 The franchise’s next entry did quite well on Kickstarter and hopefully it leads to another entry in the side-scrolling genre. While the original’s gameplay is more unique, Panic on Funkatron is a bit more fun to play now. Luckily, as the $450,000 stretch goal was reached for Back in the Groove, they’ll at least keep the bonus areas from PoF as a nice in-between. In replaying them for this piece, each game stands out — with the first being a fine proof of concept, the second taking that concept and making it more user-friendly and the third kind of bastardizing things a bit. Still, the third game did modernize it a bit with a hub world even if that didn’t really seem to fit the game and slowed the pacing down a bit. Hopefully, Back in the Groove gets funded and we see the series continue. With ’90s stuff being “in” thanks to it now being retro instead of just old, it’s got a chance to do better than it ever has before.