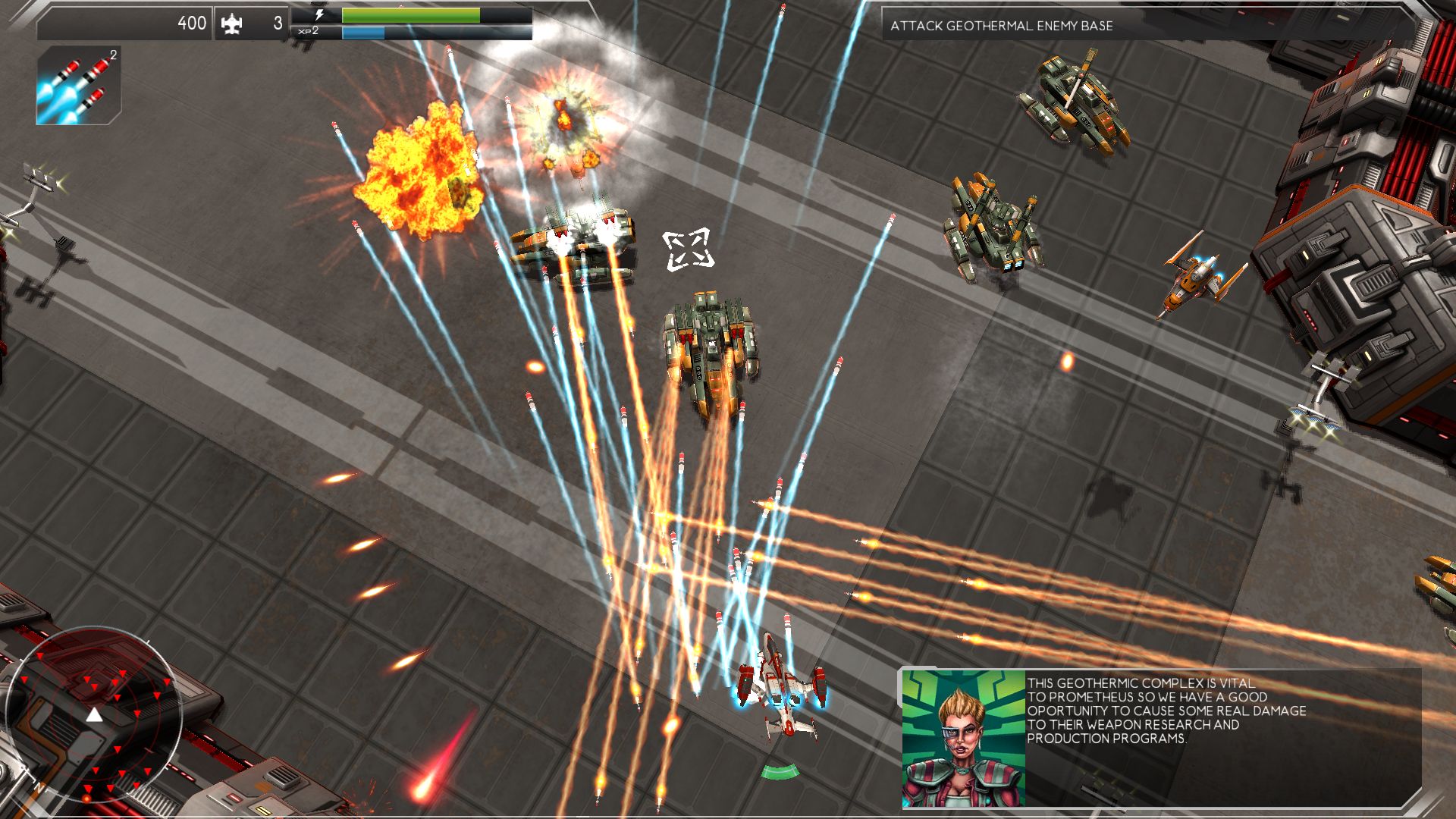 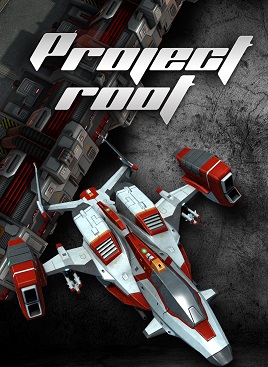 Project Root is, without a doubt, ambitious. Mixing classic shoot-em-ups (shmups) with an open world is daring to say the least. Shmups were always confined to a vertical or horizontal scrolling plane, so breaking down the barriers of the genre sounds like a huge moment of evolution for a straightforward genre of yesteryear. The creativity put into Project Root’s concept can’t be denied; it’s not an easy task. Project Root’s desire to innovate has its drawbacks, however, as the final release shows. Its combination of shmups and open-world games creates more awkward mixtures than seamless combos. These two genres aren’t as compatible as originally hoped.

Project Root aims to be an “open-world shmup.” Your tiny ship is set near the bottom of the screen, akin to classic vertical shooters like Galaga or modern bullet hell titles like Ikaruga. There’s two different firing methods, one for ground enemies and one for aerial enemies. There’s hardly any restrictions on ammunition, so you can easily hold down the L2 and R2 buttons and blast away without consequence. There’s also special power-ups like homing missiles or shields throughout each stage, so a few extra moves are available for when things get tight. Since Project Root isn’t limited to vertical or horizontal shooting, you can turn your aim 360 degrees and shoot every which way. It’s free-roaming for a shooter, but there’s one major problem that destroys Project Root: its enemies can attack you from behind.

Now, in any other genre, this wouldn’t be an issue. You can be attacked from behind in Resident Evil 4, Halo and The Elder Scrolls V: Skyrim, but in a genre whose roots are based in scrolling upwards or to the side, this cannot work. As previously stated, the ship is still located near the bottom of the screen. While there’s a large view for shooting (forward in this case), you can’t see a thing if an enemy manages to shoot you from behind your ship. There’s also no way to shoot backwards, so the only resource available to know if an enemy is behind you is through a radar, which only shows the enemies themselves and not the projectiles they shoot (and these projectiles can linger on screen for LONG after the enemy who shoots them is destroyed). If Project Root was built more like a twin-stick shooter (which is actually what it feels more like, not a shmup) and the camera angle was more centered, then it would be much more manageable, but without any organic way to take out off-screen enemies from below, the necessary tools aren’t given to overcome these problems. You’re always at a disadvantage. 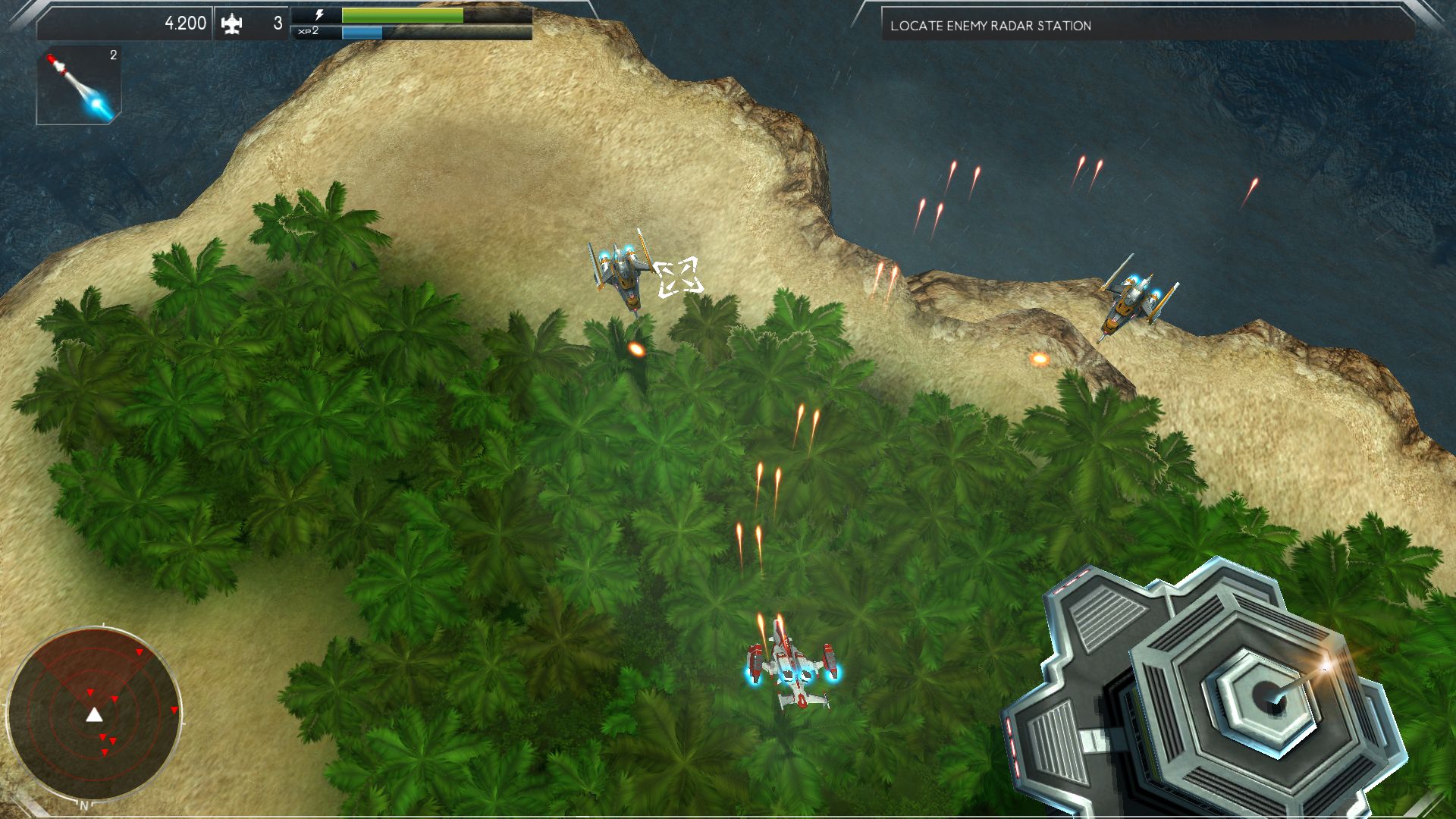 Even if you weren’t so ill-equipped, however, Project Root’s design is sloppy too. As an open-world shmup, your objectives are scattered about a single map. You can also find secondary objectives like taking out a power source or destroying idle tanks. You have a lot of things to do in each stage, but the objectives themselves lack creativity. The biggest issue with such huge maps is really just that: they’re too big. You’ll find yourself moving all over each map at a snail’s pace, thanks to your ship’s default speed, only to complete an objective that’s inconveniently located on the other side of the map. The maps can also be complex mazes, as some have multiple paths, most leading to outright dead ends. It’s with this that you wish your ship moved faster or that you had a better grasp of your location beyond your radar.

Like many shmups, Project Root is difficult. You can earn experience to upgrade various stats, which is nice, but the upgrades don’t fix the inherent issues with perspective. In fact, the difficulty curve is all over the place; one level will be a cake walk, the next an impossible mountain, the following in between. The final level in particular really lets the “bullet hell” influences go nuts, and while that is apropos for a final level, the prior levels are too easy to provide a proper curve. But Project Root’s difficulty isn’t really related to the design itself, but the awkward perspective and controls. It’s hard for the wrong reasons.

There’s a story in Project Root, but it exists in a form devoid of personality and flair. It’s solely done with still illustrations, some of which are displayed while you’re playing. In fact, Project Root‘s presentation is outright bad. Sure, there’s flashy explosions and a decent frame rate, but it’s a technical mess. Environments look dull and lifeless, despite varied locations. And, oh yes, there are bugs. Collision detection is rough and I saw repeated occasions of enemy ships magically disappearing into cliffsides, preventing me from shooting them. The audio is equally, if not more atrocious. The themes that play during Project Root’s stages are embarrassingly repetitive with the same musical theme looping its short sample over and over again. It will grate on your nerves within minutes. Project Root doesn’t have much personality on its side and its monotonous and buggy presentation doesn’t do any favors. 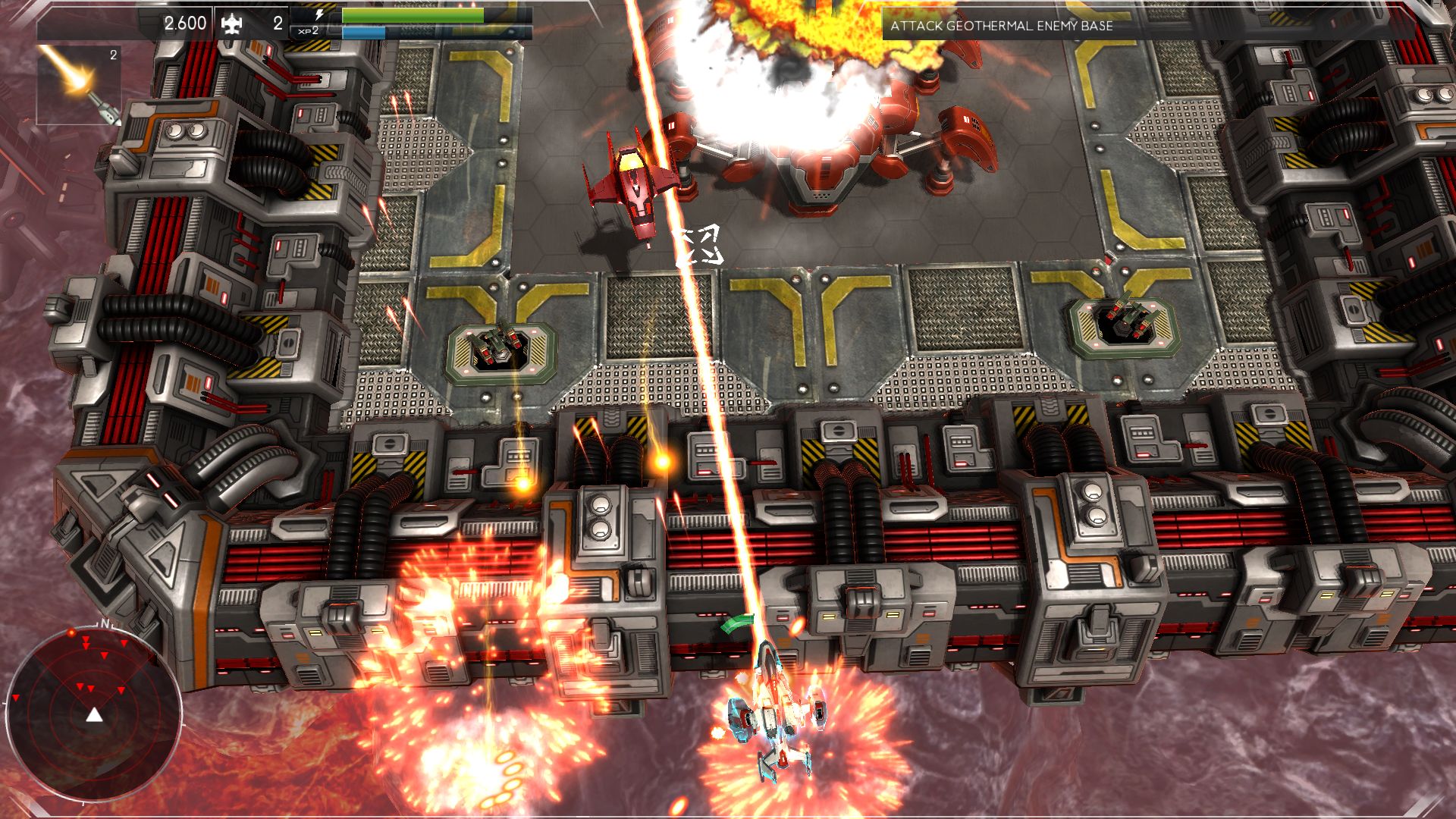 Project Root is one of those rare occasions where the game falters not just through poor execution, but through poor concept. Having a shmup in an open-world is awkward because you need to be able to see all of your surroundings. When you’re shoved toward the bottom of the screen and a swarm of enemies are attacking you from behind, you realize that this combination simply did not gel. Even if the perspective was better, though, Project Root is just a dull game. It’s hard to find reasons to change tactics and few curveballs are thrown, even in additional objectives. While the shooting itself is solid and the power-ups do mix things up, Project Root can’t overcome its inherent flaws; flaws that come from an awkward mix of genres. It gets points for creativity, but most of Project Root is either awkward or dull, and sometimes, both.