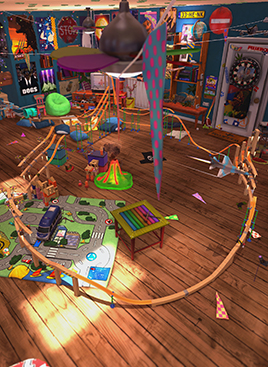 Toys need to run.  Action Henk used to be the best of the best, but time has taken its toll. With a little motivation, maybe he can reclaim the speed and skills of his glory days. That comes in the form of a stolen trophy, snagged by the evil Kentony, and if Henk wants to face off against his far-more-fit rival he’s going to need to get back in shape by dashing through some of the twistiest, trickiest courses a kid with a hyperactive imagination and a toybox bursting to overflowing can create.  At least I assume it’s a kid, because they’re never shown.  Whoever the unseen creator of the tracks is, though, they’ve got tons of plastic track, endless wooden blocks and a devious mind for physics-based time-trial racing.

Action Henk is a game about racing the clock.  Much like the Trials series, you’ve got physics-based gameplay using deceptively simple controls to pull off incredible feats of platforming.  Henk uses the stick and two buttons to perform all his moves, but things get complicated fast when you combine them with the permutations of the track. All Henk can do is run, jump and slide, and when you put it together right you can trim off seemingly-impossible chunks of time from your previous best run.

Take a simple angled run down a solid line of wooden blocks, for example.  There’s several ways to approach this depending on approach and dismount, all of which can potentially impact your momentum.  Run straight across the top of the start of the incline and Henk will have a little air time before his feet touch the ground again and the angle of the slope starts to give him its extra speed.  Do a slight hop at the top before hitting the angle, though, and he’ll preserve his vertical momentum and land at the top of the decline, wasting less slope and clearing the bottom running faster than before.  It doesn’t sound like much until you’re trying to shave a tenth of a second off your best time, at which point nailing the jump becomes the most important thing in the level. 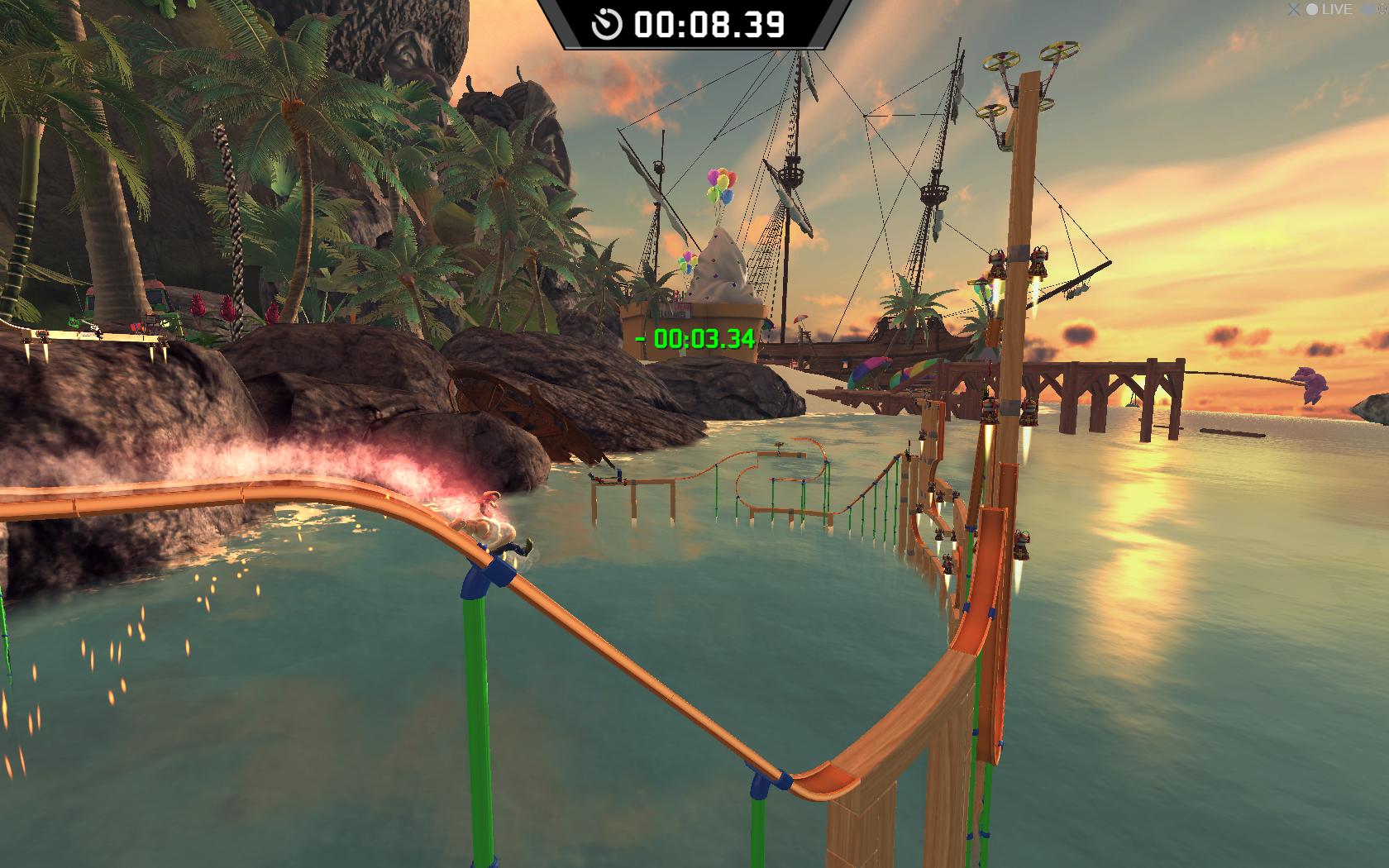 Sliding will give even more speed, because while it’s initially no faster than running it accelerates more quickly, meaning you can come off the bottom faster and use that momentum to clear the next obstacle more easily.  So, hop near the top of the slope, switch into a slide mid-air, land on your butt and hold until the bottom, run like mad.  Except in this scenario, where the angle is made from the straight lines of wooden blocks, you’ll also want to do a light hop at the bottom of the ramp to launch yourself away from it.  If this example was a plastic track it wouldn’t have that angle, although in a sharp curve you might want to go for it anyway, but generally you’ll want to keep sliding.  For blocks, though, if you time the jump at the end of the ramp right Henk gets another burst of speed, adding to his already-considerable momentum if you get the timing right.

And then you need to apply all that to an endless progression of jumps, loops, switchbacks, shortcuts, bouncy pads, and other toys and jumping puzzles.  Every surface is a new way to either lose speed or gain it, and figuring out that, if you jump in just the right spot while sliding through a curve, it adds the momentum of the boost to your overall velocity to do wonders for your final leaderboard position.  Each level has a set of four medals to earn, ranging from bronze (which is the “I participated!” medal) to gold, and then to pure mastery in the form of rainbow medals.  That last medal is cause for serious bragging, and I have to admit to being proud of the two I’ve earned so far. 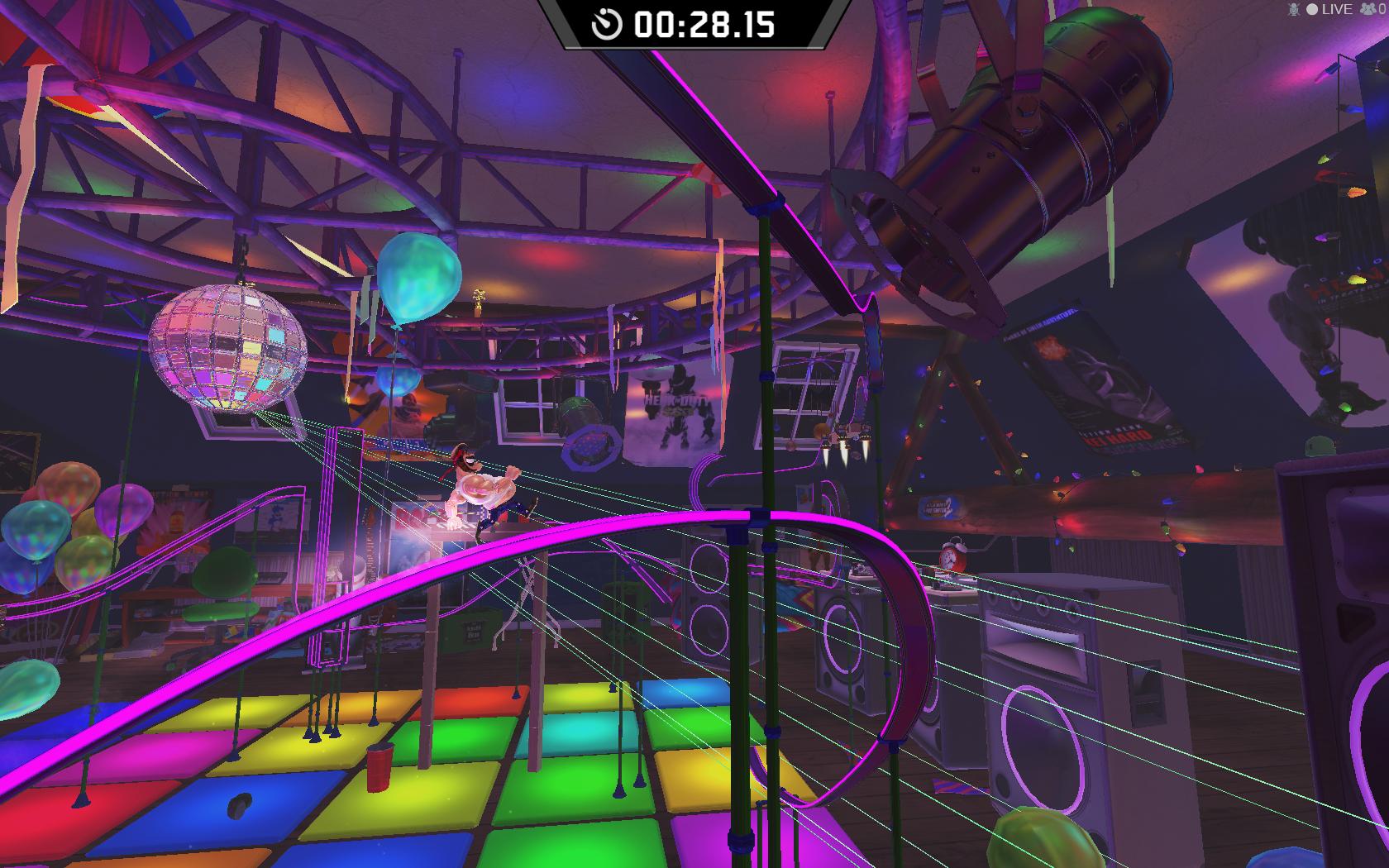 Once you’ve earned a medal on each level in a section, you open up a face-off against a rival toy to claim it as your own.  Beat your rival and you can select it as a playable character, and while they all handle exactly the same there are some fun (if purposefully ugly) designs among the lot.  Each character also has different skins to unlock, earned by clearing a bonus area at the end of each level section.  You need to earn all gold medals to get a chance to run it, and its structure is more open and free-form than the A-to-B levels of the main game.  While there’s nothing too unusual about earning new character skins, I have to admit I’d never considered the idea of playing as Moss from The IT Crowd until Action Henk proved it possible.

The sense of playfulness in character options extends throughout the whole game.  The initial set of levels in the house are packed with details, from wall posters and active toys and props in the background to courses that curve around as the camera pans to follow the action.  Oddly, while the later levels are set outside in a tropical paradise, they lose the sense of place that the earlier ones have.  There’s something about that room and its density of detail that forces you to reserve a little of your brain to pay attention to the background.  The levels get trickier and more devious, and as the challenge ramps up they get more fun to experiment with and replay in search of the perfect run, but even with sunsets or even the whole level on fire they lack the visual punch of the disco- or halloween-decorated room. 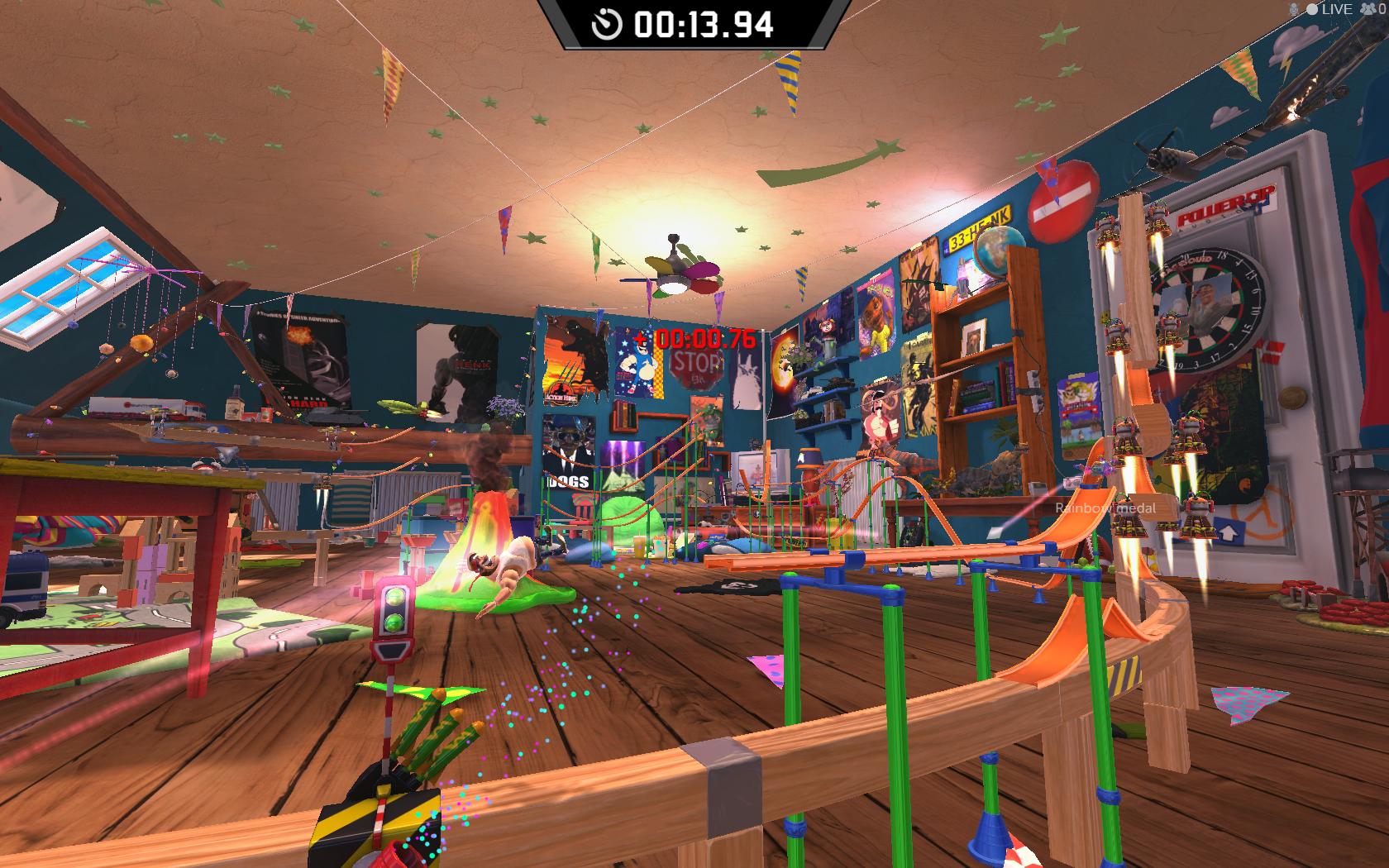 Action Henk is easily one of the best speed-runners in years.  The simple controls make its wealth of technique easily accessible and the sheer variety of challenges in its course layout makes each level a blast to learn and perfect.  A high-level tutorial for the more subtle moves would have been nice, but it’s nothing that paying attention to experience can’t cover.  Somehow manage to perfect each technique and earn a rainbow medal on all levels and you can even build your own or download more from the Steam workshop.  Getting through the levels only requires bashing Henk against them, restarting at checkpoints and accepting the bronze.  Getting good, learning the level flow and putting it all together in a lightning-fast run, on the other hand, takes a little practice, but the reward is a feeling of earned skill in a perfect execution that looked wonderfully effortless.