Super Mario Bros., the NES classic, completely changed the landscape of video games, and its sequels have continued to revolutionize the platforming genre ever since. Mario has been on quite a few journeys since he first rescued Princess Toadstool 30 years ago, and unlike most classic characters, he’s enjoyed a fruitful career in the third dimension. That doesn’t make his sidescrolling adventures any less impressive, though. The pudgy plumber’s 2D exploits remain some of the finest experiences in all of gaming, and now Nintendo is giving players the power to build their own versions of the Mushroom Kingdom.

In Mario Maker, players can, as the title implies, make their own Mario levels. It’s an experience fans have clamored for since the series’ inception, and Nintendo is looking to go above and beyond anyone’s expectations with this marquee Wii U release. The Japanese company prides itself on producing fun, accessible experiences for players of all ages, and from what we’ve seen thus far, Mario Maker takes that mantra to heart. Its design interface is slick, intuitive and loaded with options, and the entire experience is incredibly fluid, transitioning seamlessly from editing to playing levels and back again. One particularly genius mechanic records every movement of Mario while in play, leaving an easily discernible trail of jump arcs and level progression to help inform your design decisions. Every aspect of the creation suite is designed to make building your own levels an easy and enjoyable process, and it truly seems like the only limit is your imagination. 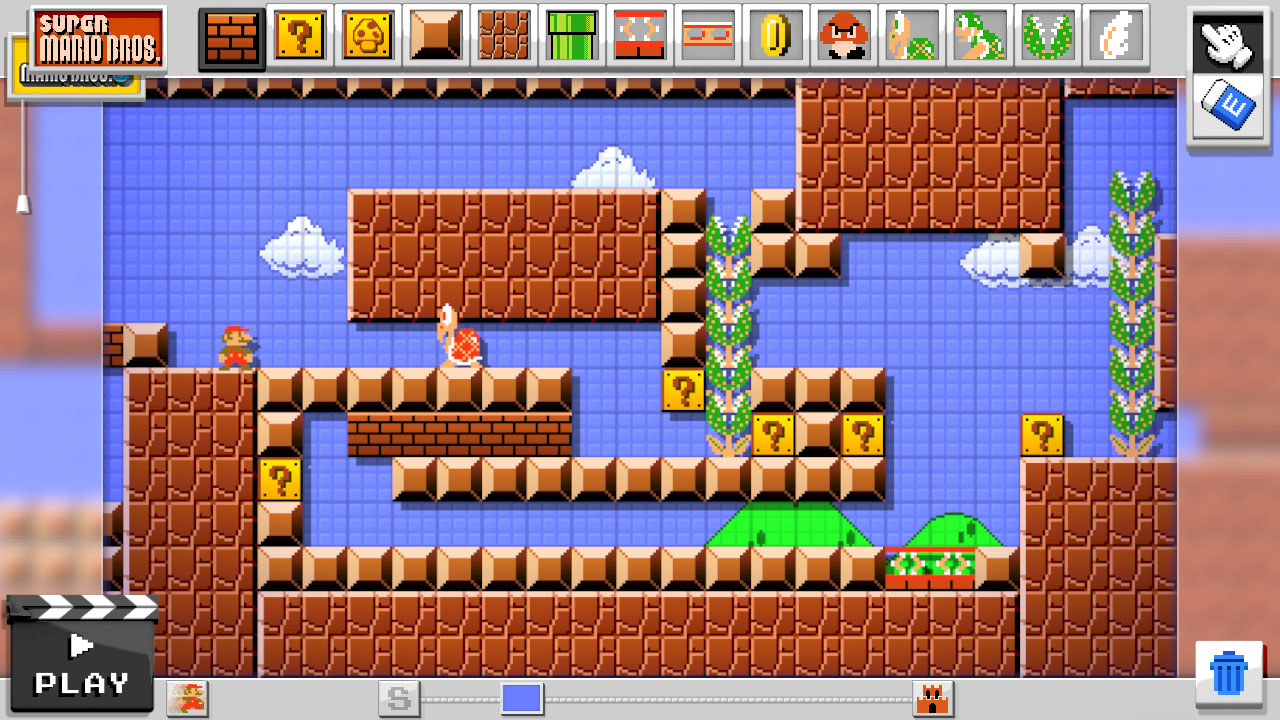 Mario games are historically wacky, but Mario Maker gives players the opportunity to take that charm and unpredictability to the next level. Using the flexible creation tools, you can slap together combinations that you would never otherwise see in a Mario game for hilarious and surprising results. A piranha plant on top of a Koopa Paratroopa? You got it. A lethal tower of Hammer Bros.? Of course. Flying Fire Flowers? You already know. The possibilities are enormous, and it will be fantastic to see what creative contraptions the populous produces when the game launches in September. Nintendo has already shown off a number of crazy, convoluted and chaotic level designs, but I have a feeling that’s only the tip of the iceberg.

Perhaps the coolest part of Mario Maker is that it lets players switch between multiple iconic 2D Mario art styles on the fly. There’s the timeless Super Mario Bros., the immaculate Super Mario Bros. 3, the magnificent Super Mario World and the modern New Super Mario Bros. U, together representing some of the plumber’s finest outings in his thirty year career. Nintendo has even crafted brand new sprites to make sure there are no issues or inconsistencies moving between art styles, adding 8-bit interpretations of enemies and level tiles like Wiggler and the music block to the mix despite their absence in the original Super Mario Bros. on NES. In this way, Mario Maker is not only a celebration of Mario’s history, but also a revisionary amalgamation that allows players to enjoy Mario’s distinct generations in entirely new ways.

As incredible as all of that sounds, there’s a lot we still don’t know about Mario Maker. It remains unclear whether Nintendo will employ the talents of its veteran developers to design special level packs, or perhaps even invite illustrious individuals from around the industry to do so, and we still have no idea just how many of Mario’s iconic power-ups will be available or how the plumber’s expanded arsenal of abilities in his later games will be handled in the context of earlier art styles.  Those mysteries are part of Mario Maker‘s appeal, and Nintendo has done a wonderful job doling out tiny morsels of information on the game since its reveal during last year’s E3. But as we learn more about the game’s secrets and limitations, will we still be so enthused? Allow me to speak for the world when I say, “yes”.