Drive Any Track popped up on Greenlight back in January and looked like one of the greatest gaming ideas ever.  Combine Audiosurf’s music course generator with a stunt racing game like Trackmania, where each song generates a unique track filled with course toys to fly over, and the result is a game that looks absolutely irresistible.  The journey from Greenlight to approval to Early Access has moved along at a brisk pace (as these things go) and now Drive Any Track is available for all.  The gaming experience is very solid, looks great, and I haven’t seen a single bug or crash, but at the moment it still feels like a great idea working its way towards living up to its potential.  Of course, that’s what Early Access is for.

All the basic parts are there for Drive Any Track to be great. You choose a song from your playlist, the game thinks a few seconds, and then you’re off down the procedurally-generated course, jumping and power-sliding to the music. The race’s start is actually one of the more clever moments in the game, as the usual Beep… Beep… Beep… Beeeeee… of the starting timer also doubles as the car driving over the rhythm markers. The markers keep pace with the music as you drive, and good scoring involves keeping pace with the first one for a 4x score multiplier. Turbo boosts can actually see you move ahead of the marker for an x10 multiplier, but for the track to remain in complete synch with the music you want to be right on top of the line for the whole run. If you fall behind the second or third marker line it does bad things to both the score multiplier and your end-of-track bonus, plus it’s always more fun when the course matches the music. 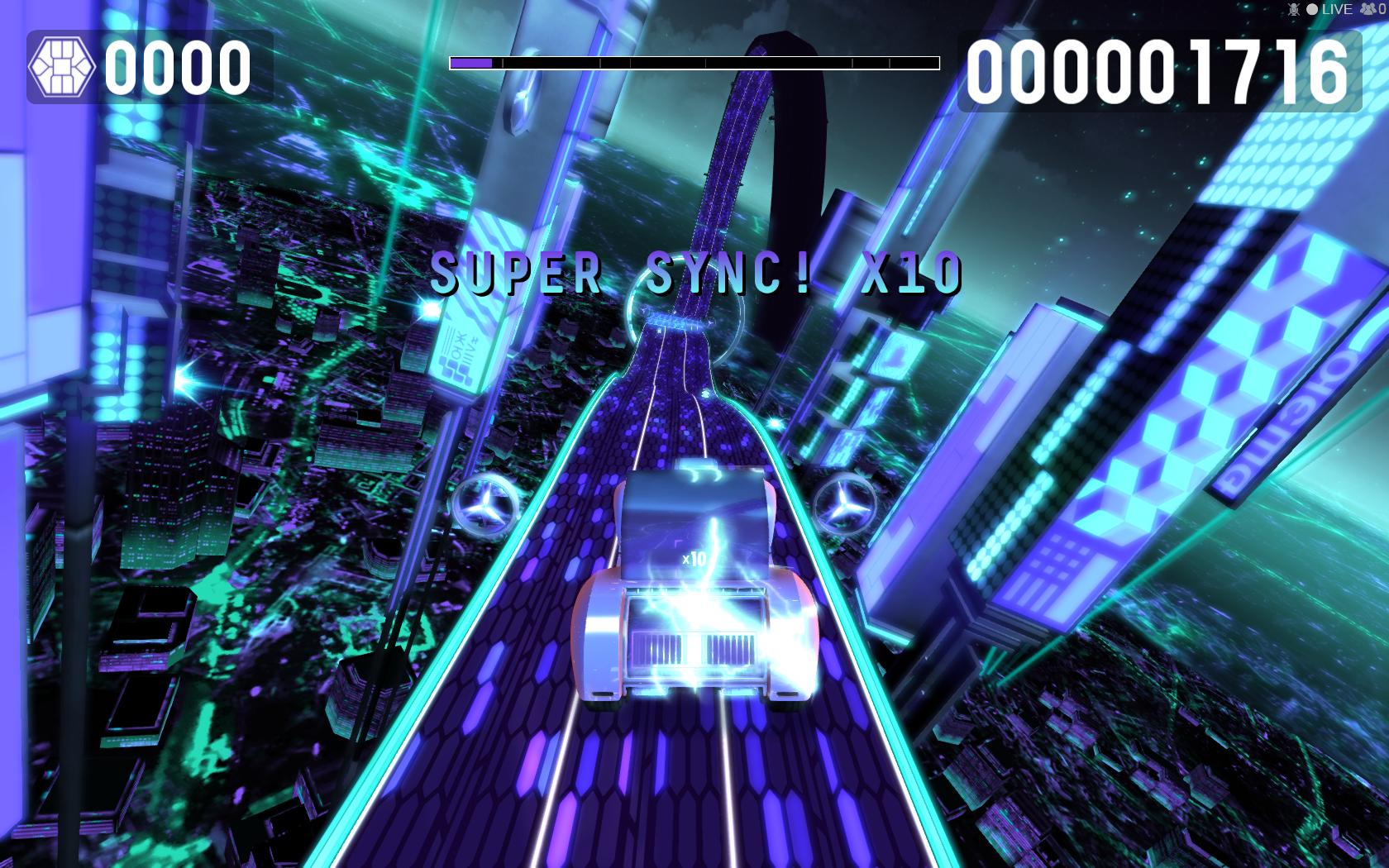 The track is going to do what it can to shake you off the beat, of course. Jumps and loops are easy enough to navigate, but sliding around curves takes a bit of getting used to due to the cars’ handling being a bit less arcade-y than you’d expect. There’s no handbrake to initiate a power slide, and for that matter no accelerator either. The car auto-accelerates to its fastest speed as quickly as possible, always trying to stay in synch with the music, and if you want to avoid crashing into the walls on a curve you’ll need to anticipate and get turning a little early. Certain sections of music can generate a long series of S-curves, causing the car to pinball off the walls until you get used to the handling.

Curves aren’t that hard to navigate, once you’ve got the car handling down, but barriers are another issue entirely. They won’t break the car but they will slow it down, and it doesn’t help that the track-generating algorithm is terrible at placing them. Normally barriers can be seen coming down the line, giving you good warning to at least try to get out of the way, but too often they appear just as you crest a hill with no warning beyond the quarter-second notification that you’re screwed.  Loops?  The appear in the middle, scrolling into view just in time to plow through.  Jumps?  They can appear right at the bottom, with no notice they’re there until you land.  Fortunately this isn’t the first racing game to tackle this issue, so hopefully there will be an on-screen indicator of barrier placement within a certain minimum time of encountering one added soon.  The developers have said in the Steam forums that they view barrier placement as something to learn over repeat driving of a track, and while I can see the point it doesn’t make smashing into something I had no idea was there any more fun. 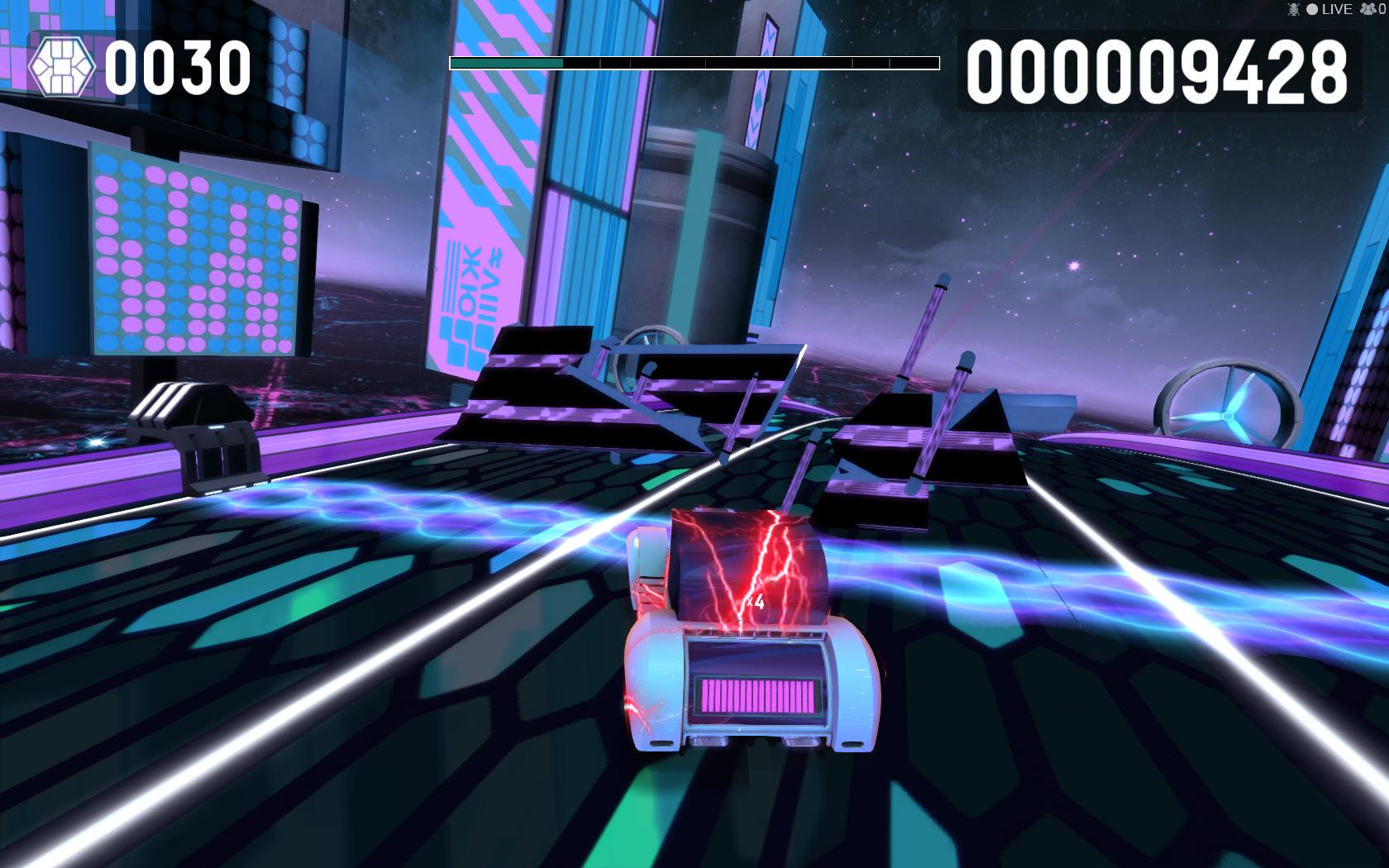 Another busted barrier that popped up with no warning.

The other current problem with the track generator is that it needs more toys to play with.  Currently all it’s got is hills, loops, ramps, jumps over massive breaks in the track, and a handful of pickups to drive through.  Turbo makes you go fast, allowing you to either outpace the lead synch line and work the bonus multiplier, or catch up again to normalize the x4 scoring.  Strings of four boxes act as point rewards and hexagonal pickups give you credits to spend on new cars and car decorations back at the menu screen.  Put it all together and you’ve got a track, and while they’re fun to play they get a bit same-y after you’ve played a good number of songs.  Part of the fun of this type of game is putting your music collection to the generator and see what falls out, and while the generator does a good job with the pieces it’s got it feels like there should be more of them to make each course stand out more from the others.  It’s also worth noting the track creator likes to do jumps rather than downhill runs when it’s time to lose altitude, which is a shame seeing as one of the pleasures of driving is heading down an incline and seeing the world laid out before you.

While it’s easy to define Drive Any Track by the things it doesn’t have yet, there’s no denying that what’s there is the basis for a really fun musical stunt racer.  Get a couple boosts on a familiar course, zipping through loops and getting huge air while Resurrection from the Gitaroo Man soundtrack has two electric guitars screaming at each other (Ropeland mix makes for a harder course), or Rock is Sponge by Jojoulka from the Rez soundtrack drives the beat forward, or really any favorite song you may have, and odds are good you’re going play a nice run.  Zip ahead of the synch line and the entire course lights up like a dance floor, and when you jump and land to the beat it feels fantastic as the crunch of hitting the course again lines up with the music.  There are a lot of improvements on the way, such as FLAC support and an included soundtrack, and the Steam forums have a lot of suggestions the developer is taking into consideration, so it should be fun watching the game develop.  There’s a long way to go, though, in both feature-set additions and track generator tweaking, but the basic skeleton is there for Drive Any Track to grow around.