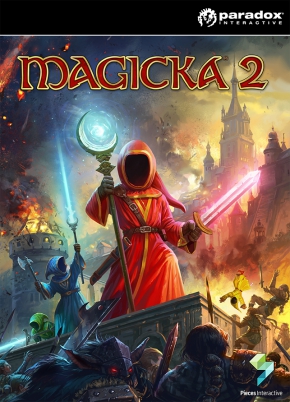 Magicka 2, and its predecessor Magicka, seem to embrace the hilarity that comes from messing around in a virtual world with your friends. Though fans have been eagerly anticipating the sequel to the cult combine-a-spell adventure, a fair amount of caution was always looming in the background due to developer Pieces Interactive taking over for Arrowhead Studios (developer of the intriguing, but flawed, Helldivers). Thankfully for everyone involved, Pieces didn’t just manage to capture the glory of the original, but they’ve created what is, for the most part, a better title. Magicka 2 is certainly not the perfect video game, but it’s nearly impossible to deny that it doesn’t succeed at exactly what it sets out to do: provide a smashing good time.

Magicka 2 puts one to four players in control of hooded wizards that have eight elemental spells (fire, water, ice, electricity, rock, healing, death and shield) at their disposal. Much like in Magicka, all of these spells can be combined in combinations of up to five individual elements in order to create more powerful attacks. If you’ve ever played Kirby 64: The Crystal Shards, the proceedings are somewhat similar here; for instance, combining ice and electricity creates a static field that has the potential to freeze all those who come in contact with it. All of these spells can be cast as a ranged attack, an area-of-effect attack, a self-cast or a weapon-buff. Attempting to explain this system is far more complicated than the actual mechanics themselves, as it’s abundantly clear what to do from moment one. The sheer amount of potential element combinations, and all of the dynamic animations that result from each one gets more and more impressive as you start to think about it. Consider the fact that every one of those combinations likely requires some sort of coding script in order to run and its clear that Magicka 2 is more of a technical feat than it may initially appear to be. 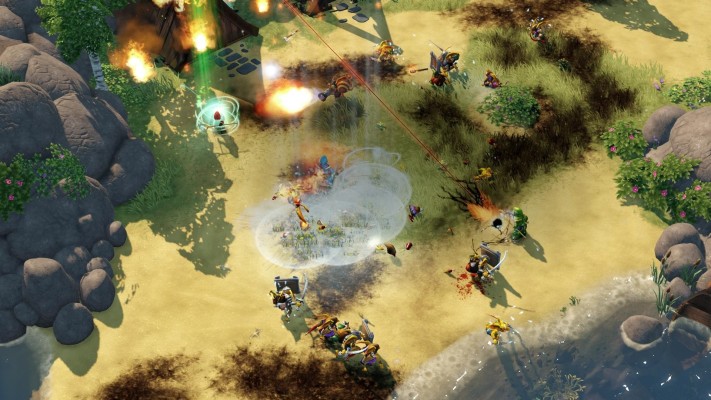 Figuring out spell combinations is half the fun of Magicka 2, and while you’re constantly learning new attacks, you’re often short on time in which to use them. This creates this title’s most addictive quality, as players are constantly fighting to execute appropriate and powerful spells in the shortest amount of time possible. Whether players are using controllers or keyboards and mice, a delicate balance has to be struck between button mashing and tactical combination entry. The ensuing chaos that comes from any battle in this top-down action title is what makes it so damn fun, especially when played with friends. Death is constant and failure is inevitable, but Magicka 2‘s concept is so sound that dying is rarely a cause for frustration.

Magicka 2‘s main campaign is largely exciting from a gameplay perspective, but it does face two very major hiccups. In the eighth chapter, there’s a certain enemy-spawning box that completely breaks up any sense of flow players may have. By spawning constant cooldown-reducing, weakness free foes, this rectangular enemy’s strongest trait is its penchant for frustration. If its health was taken down to about half of what it currently sits at, then this wouldn’t be a problem, but spending almost twenty minutes doing the same mundane thing over and over again feels like a misstep. The final boss battle is also quite disappointing; without spoiling anything, this fight has a number of seemingly criminal boss design flaws working against it. Not only does it contain the always obnoxious boss multiplication phase (“Oh, you beat this boss once? Now kill three of them), but it relies on a mechanic that feels completely unlike anything players have done in the previous eight chapters. Introducing a new mechanic at the very end of the campaign generally feels awkward, and this battle is no exception to this. These two stumbles aside, playing through Magicka 2‘s campaign is certainly a joy for single players or a team of friends. 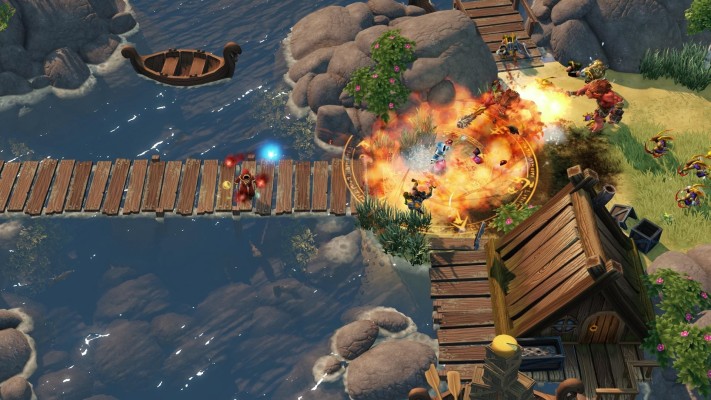 As wonderful as Magicka 2‘s chaotic, top-down-shooter-style gameplay is, the true star of the show is its humor. There’s an inherent absurdity to every moment of the six-to-eight hour campaign, from the nonsensical gibberish that every character speaks to the ridiculous gaming and pop culture references that litter the environment and dialogue. Everything from really bad koala jokes to references to Papers, Please have made their way into Magicka 2, so if you’re someone who enjoys a dumb chuckle every now and then, you’re about to fall in love. If you’re playing with friends, it’s nearly impossible not to laugh at the ridiculous garbage that comes out of your speakers; there’s little doubt that the cartoonish nature of Magicka 2 will find its way into your subconscious. Hell, Magicka 2 is just as fun as an alley-oop device for jokes as it is as a video game, which is an achievement in it of itself. After all, the original studio that created this humorous world was not involved in this title’s development, so for it to be just as funny as the original is something special.

As great as Magicka 2‘s humor is, its story is largely terrible. Of course, this might be somewhat purposeful, but the sheer reliance on dialogue-heavy cutscenes seems oddly inappropriate for a title that thrives on moments of action-packed gameplay. While Vlad’s appearances are always lighthearted and fun (and he’s still totally not a vampire), learning the backstory of inconsequential characters only serves to mess with Magicka 2‘s pacing. Again, there’s nothing wrong with the more humorous dialogue exchanges, but the more serious notes often become tough to pay attention to because of how out of place they are. 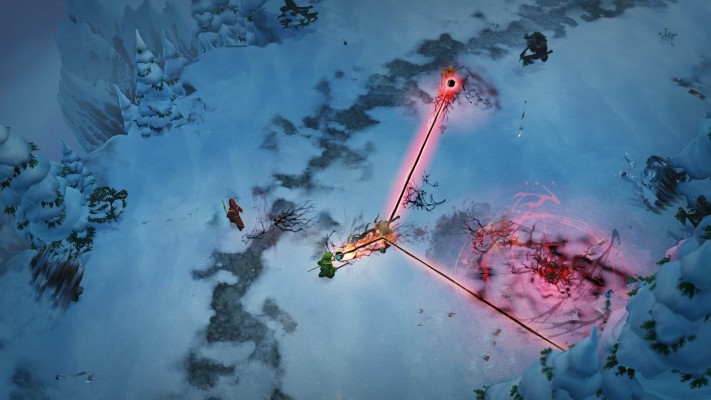 Though Magicka 2 is much more polished than its predecessor, there are still a few technical concerns that warrant mentioning. When playing with a gamepad, there are moments where a full movement of the right stick doesn’t initiate a ranged attack. Though this is more of a controller-friendly title than the original Magicka, there are still moments where players will be left vulnerable due to an input not registering. As the campaign, or the exciting and soon to be underrated wave-based Challenge mode, progresses, there becomes less and less leeway for mistakes and glitches. When leaving an enemy alive for an extra couple of seconds is the difference between life and death, controller mishaps become unbearable. There’s also a great deal of clipping, animation bugs and other visual faux pas that mar the proceedings, but these cosmetic issues serve as more of an homage to the inherent imperfection that make Magicka and Magicka 2 so charming.

Pieces Interactive has created a game that thrives when played online or on the couch with friends. Because friendly-fire is always on, there’s always the potential for untimely deaths and accidental damage dealing in the name of hilarity. Humor and stupidity are always better with friends, and this is no exception. It’s also worth noting that, as of this writing, there don’t seem to be any connection issues, so players should be able to hop into online matches without any major issues (though the necessity of having to create a Paradox Interactive account to play online on PC is a bit of a drag). 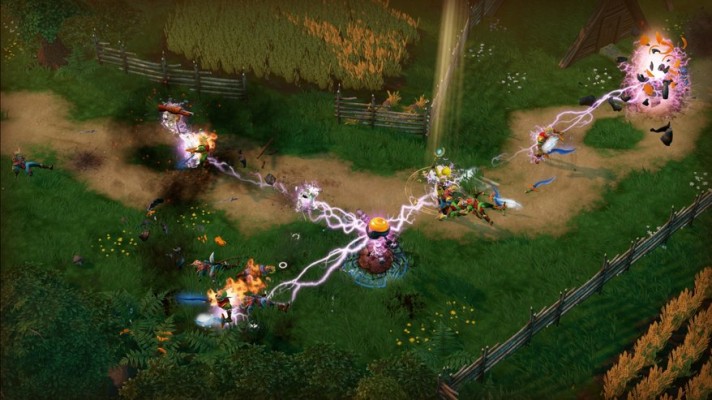 Much like its predecessor, Magicka 2 is a flawed game whose faults generally contribute to its charm. There’s something wonderfully engaging about a game that knows exactly what it is, doesn’t try to be anything more, and succeeds on nearly all fronts. Sure, its actual narrative isn’t that great and its campaign has a couple of major low points; that isn’t what’s important here. As critics, we often forget how fun is often the most important factor in whether or not a game is good, and Magicka 2 comes jam-packed with pure, unadulterated amusement. Yes, it has its flaws, but in the end, who cares? To lambast a title this hysterical, this full of bliss would be a crime to gamers, and the industry as a whole. If you’re looking for a game that’ll put a smile on your face and potentially make your evening with friends a bit more memorable, you could do a hell of a lot worse than Magicka 2.