Transformers: Devastation is a third-person action brawler developed by Platinum Games, known for the Bayonetta series. Yeah, read that one more time for good measure.

The latest entry in the Transformers series does something quite unique by paying homage to the rich history of the franchise by going more towards the classic content in the Transformers universe, from the comics, toy line and original TV show, taking a modern take on the Transformers we’ve known and loved for the past 30 years. This style will be clear in the artistic vision and lore for this title, with the story written by Andy Schmidt, a writer for IDW comics and has been a writer on past Transformers titles, and is essentially a Transformers expert (the most honorable of pop culture titles).

The story revolves around the earth being violently terraformed into a new Cybertron. The Autobots do not understand why this is happening, but the Decepticons seem to be behind it, so one can only assume that this is a terrible, terrible thing.  Megatron and his minions have discovered an ancient ship underground and have infiltrated it and it’s up to the Autobots to stop them and save the Earth from devastation (as always). 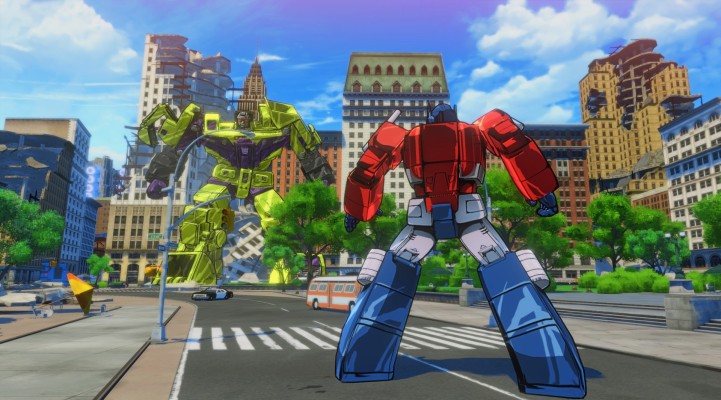 Optimus Prime is only one of five playable characters, and is, of course, voiced by Peter Cullen (alongside Frank Welker’s Megatron).  The second playable character revealed is Bumblebee, who has faster attacks that do less damage than the slower, but more powerful, Prime. Since Bumblebee is so small, he also has the unique ability to slide underneath, or leapfrog over, enemies and attack them from behind. As for enemies, aside from Megatron, Soundwave is back in his usual tape-deck glory with his cassettes Laser Beak, Ravage, Frenzy and Rumble in tow. Also, as the title of the game implies, Devastator, who is of course the large mega robot made from the Constructicons, plays a large role in the proceedings. 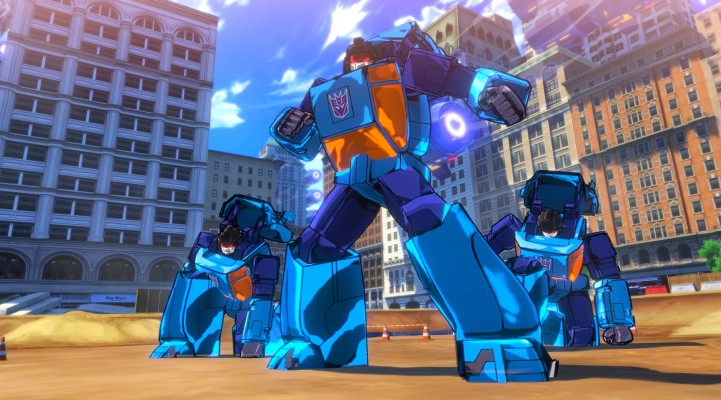 After an impressive demo, we were able to ask the team some questions, and here’s what we learned from our Q&A session:

When we asked the development team what was one previous Platinum game that could be compared to would be, there was no clear-cut answer. It will feel like a Platinum game in its responsiveness and the way the controls work, but it is unique at its core.

We also asked how the team about how Platinum Games about how, in light of the Legend of Korra’s poor reviews, they assure people that taking on another licensed game will be different and quell the skeptics, to which they responded by acknowledging the response from Korra, though they consider it to be a success because that game was made primarily for fans of the Legend of Korra, where it was received very well. In this title, they worked on building on the cell-shading from Korra and working hard on it to give it the metallic look expected in a Transformers game.

The rich deep combat of Bayonetta and Metal Gear Rising was brought up, and we wanted to know how to balance that with the approachable nature of the Transformers franchise, which may be skewed to a slightly younger audience. The team responded that this game will have a lot of difficulty levels for players to help customize their experience so that more novice players can enjoy it, and if you wanted a challenge you definitely will be able to get it.

Finally, when asking about how the collaboration between Transformers and Platinum Games came about, it was actually quite simple: Platinum said they wanted to do a Transformers game and asked Activision what they had for them, and they worked together to bring this game about.  The idea was always to do something fresh, new and separate from the previous titles built by High Moon.

There is no release window currently set for Transformers: Devastation, but from everything we’ve seen thus far, we can look forward to when it comes out.