You may have read by now about the focus on immersive gaming at E3 this year. It’s no surprise the industry is focusing more on VR. Haptic rumbles in our palms and 3D glasses have done well to engage us in all but our periphery. While 3D game play hasn’t fully caught on, virtual reality could be the future of gaming.

Microsoft debuted Hololens Minecraft with an impressive demo that took the game from a flat projection on a wall to a 3D interface rising from the depths of a table on stage. What sets this technology apart from other immersive gaming experiences is that it incorporates your actual surroundings instead of completely shrouding your vision in the cloak of another world.

Sony also had its own virtual reality gear for Project Morpheus set up at the event, giving players a shot at true first-person gaming.

Also on display, and at a less crowded booth, was a little-publicized immersive system from Beijing-based ANTVR. Built to accommodate any smart phone with a screen from 4.6-6 inches, the TAW VR headset was funded on Kickstarter last year.

With other mobile VR systems like those built on Oculus – we’re looking at you, Samsung Gear – there’s nothing particularly special about ANTVR’s TAW VR headset.

But if anything should be yelling at you in all caps, it’d be ANTVR’s awesome new prototype that adds more movement to your immersive gaming experience. Dubbed The Holodeck after the Star Trek namesake, ANTVR’s new immersive gaming experience uses an infrared tracking system to let you wonder around a grid pattern. You’re still tethered to a computer with wires sticking out of the back of your head, but ANTVR is working on making the system work over WiFi. The demo proved to be a little laggy, but showed promise.

The headset shoots infrared beams at reflective dots on the ground to track your movement on a grid pattern. The dots can be placed on a mat that could be folded or rolled up when not in use. ANTVR doesn’t currently have plans to sell the reflective dots or mats, but a rep told Hardcore Gamer they’d have it figured out by the year’s end. 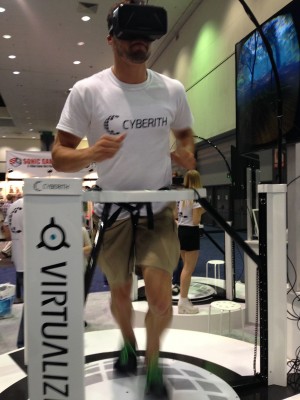 ANTVR wasn’t the only walk-in-the-park immersion on tap. After moving through several prototypes, Cyberith outfitted E3 attendees with its Visualizer, a contraption that allows you to walk, run and crouch in place.

A round sensor plate acts as the ground beneath you, allowing you to slide your socked feet across it in a mock walk.

You’re first strapped into a ring that surrounds your hips and both stabilizes you and tracks your vertical movement.

You’re of course wearing VR goggles with a wire suspended from a rod over your head.

Probably one of the most immersive first-person experiences, the Visualizer takes some getting used to. And at $1,249 on pre-order, it certainly isn’t the cheapest gaming accessories to be had.