It’s a story ripped from the pages of reality: the world appears corrupt if you’re one of the people who choose to dig deep enough. In Mirror’s Edge: Catalyst, Faith isn’t just a symbol of hope, she is also the only one who can become the voice for change. You must become the revolution in this dystopian society.

This reboot of Mirror’s Edge takes you to the beginning of the series in order to teach you a number of important details on how Faith became a runner to relay messages back and forth for the underground resistance. The city’s totalitarian regime tells its citizens to be productive every day by working, but they should tell Faith to slow down because she’s making her way to the top to put an end to the oppression.

In Mirror’s Edge: Catalyst players get to roam anywhere they please, which is something fans have always wanted from the original game. Faith will embark on various missions through the city and can deviate from the storyline to complete side tasks as well. There are also collectibles to obtain and puzzles to solve throughout, so players should have an ample amount of content to keep themselves busy with. 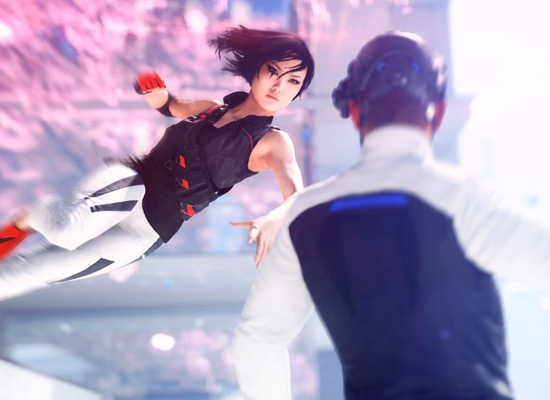 Like in the previous game, Faith uses her quick footwork and parkour skills to explore the rooftops. Parkour is also an integral part of her combat techniques, as she’ll have to use her momentum to propel her attacks against opponents. Unlike Mirror’s Edge however, Faith will not be using any weapons in Catalyst. The city’s soldiers still have firearms but Faith has to rely solely on her fists and feet to take them down. Though, to be fair, she won’t go into a fight completely empty handed since it’s been confirmed there will be some helpful gadgets to use.

Mirror’s Edge was a cult classic that Electronic Arts always wanted to flesh out more for its fans. Taking into account the request for free-roaming and using the upgraded Frostbite 3 engine for a more fluid gameplay, Mirror’s Edge: Catalyst should be an enjoyable experience. The game is coming to Xbox One, PS4 and PC early next year on February 23. You can pre-order it now for PC, the console versions will come soon.