Alpha Protocol. The Agency. Scott Pilgrim vs. The World. Overstrike (which then became Fuse). Watch Dogs. The Division. Each and every single year I pick one title as my “Do Want” of E3. What makes a Do Want? It needs to be a new IP, and it needs to be new at E3 the year it is selected. Last year, for the first time since I began writing (this is now the 8th E3 I have covered), I failed to find a Do Want, disappointingly. In hindsight, Cuphead would probably take those honors even though it isn’t a game that (from the looks of things) is playable on more than one platform. It is with that wrinkle in my criteria, however, that I found this year’s winner.

Ladies and gentlemen, I am proud to announce my Do Want for E3 2015. In an unprecedented, first-time selection, a PlayStation exclusive has won the honor, and that new IP is none other than Guerrilla Games’ Horizon Zero Dawn. I made a reference to how this looked like Sony saying “Screw it, we’ll make our own Tomb Raider with hookers and blackjack,” but the more I got to see of this over the last few days, the more the similarities disappeared. 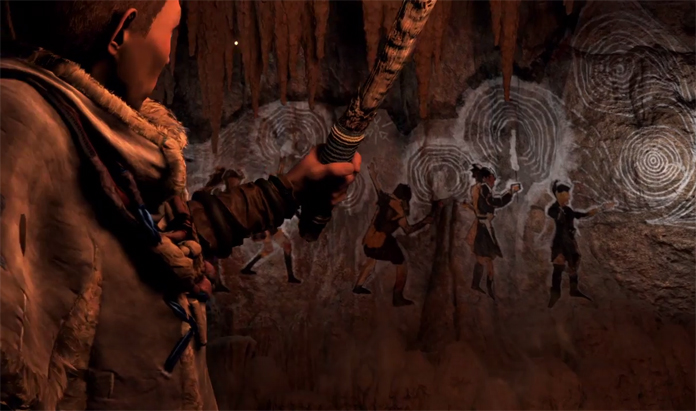 Don’t let that cave painting fool you, this game is set in the far future. A cataclysmic event has occurred and, 1000 years into the future, nature has reclaimed the land, but something odd is afoot. While humankind is no longer the dominant species, and there are plenty of organic creatures among the various human factions that are learning to survive in a world without the modern technologies we’ve come accustomed to, there are also creatures large and small that seem to be made out of mechanical or robotic parts. 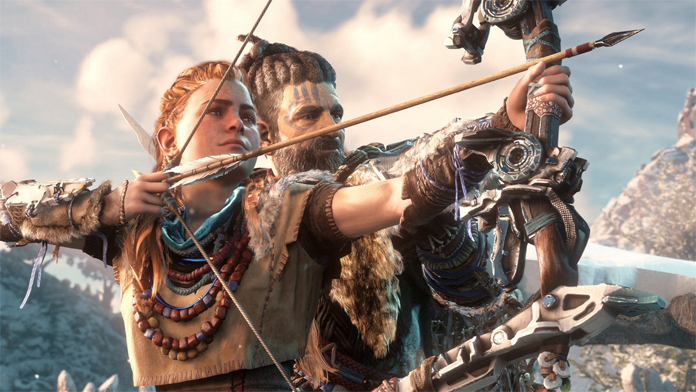 Centered around a female protagonist by the name of Aloy (while it may look like a misspelling or a play on words for alloy, it is pronounced A-Loy), Horizon Zero Down is Guerrilla Games’ first title away from the Killzone franchise since 2004, and while the famous studio gotten quite good at sculpting worlds in grey and brown, it is nice to see they can also create a vibrant and lush landscape, which was a welcome change of pace for the developers who have quite enjoyed designing this whole new world. Aloy is determined to find out how the world became the way it is, how the machines have become the dominant entity on the planet, and what happened to civilization before the apocalypse. She is outcast by her tribe for these thoughts and is on her own for much of the adventure, scouring every corner of a realm filled with relics and buildings in order to answer the secrets of the past. 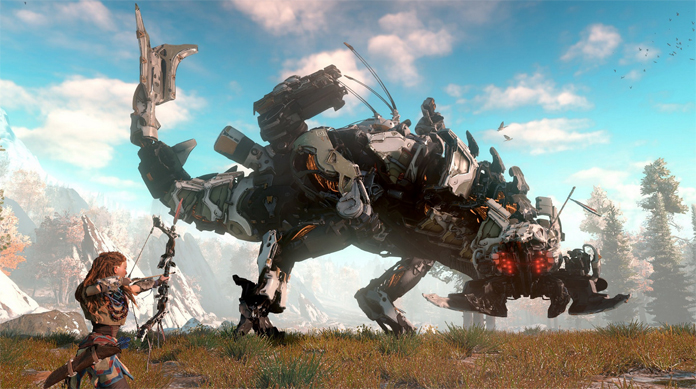 Exploration and survival are the name of the game as Aloy traverses the land, scavenging parts off the mechanical beasts with her trusty bow in order to craft better weapons and armor, all while trying to find out how these creatures came to be in the first place. Along Aloy’s journey, she will need to learn the machines’ behaviors, attack patterns and weak points in order to survive. During the gameplay trailer displayed at Sony’s conference, Aloy ran into a massive enemy that looked like a robotic Tyrannosaurus Rex, and she had to slide under it and hit a weak point on the belly of the beast. Not all beasts will be the same, and it was mentioned by the developers that the largest ones are not necessarily the most dangerous, so Aloy will need every ounce of her wits and agility to survive each confrontation. 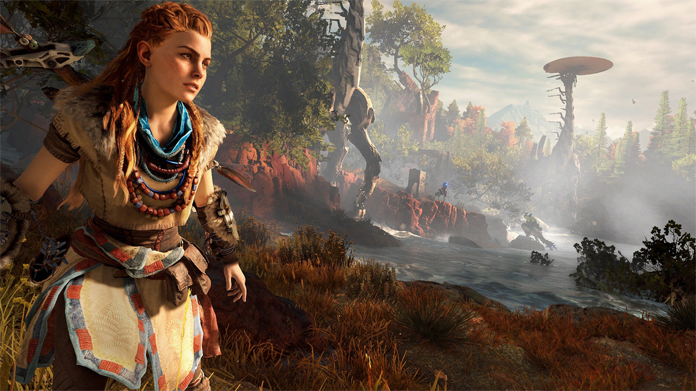 Luckily, Aloy will have more than her bow at her disposal, as she collects machine parts off these creatures she can use them to create more weapons, specialized ammunition like explosive or rope arrows, along with traps and other tools to help her on her way. She also has the environment on her side, as we saw she was able to crouch through a large brush in order to attack a deer-like robot and snipe some green canisters off of its back (presumably in order to craft with). In addition to a stealth system, the environment is fully alive with a changing weather system and a full day/night cycle. 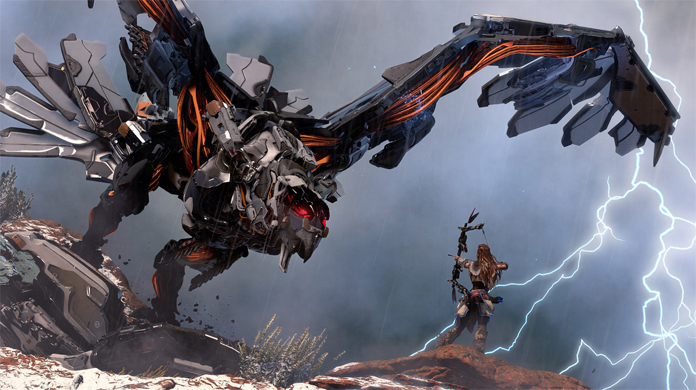 All in all, with just the little we’ve seen of Horizon Zero Dawn so far, and what we know about the world and Aloy, this game has given me every reason to be excited for its release in the future. Knowing the team behind it, I believe everyone can only expect good good things going forward as we see more.

Horizon Zero Dawn is set to release sometime in 2016, so I’m sure we can look forward to finding out more about this game later this summer at Gamescom in Germany.