Batman: Arkham Knight is a superlative sequel. You know the type. Everything is bigger and better than previous games. Numbers and stats whiz by you like “Gotham here is at least five times bigger than Arkham City” or “there are more Waynetech upgrades than ever before.” For the most part, it’s great to hear, but playing the numbers game is an endless cycle, and eventually, it’s just desensitizing. A sequel can’t just be bigger. That’s not the exciting part. So what sets Arkham Knight apart from its predecessors? What’s the exciting part there? Let me tell you.

The Batmobile can drive up the sides of buildings.

The Batmobile can drive up the sides of buildings.

A lot of people have been pretty skeptical about the Batmobile in Arkham Knight, and probably for good reason; there hasn’t been a great Batmobile in a game before, and Rocksteady’s Arkham series has been working perfectly fine without one. But let’s put it to rest right now: Rocksteady’s Batmobile looks awesome. It can smash through nearly any obstacle on the road, it can blow holes in walls, it can intimidate or knock out Batman’s enemies, it will paint arrows on the ground to lead you to waypoints so you don’t have to stare at a mini-map, and yes, it can fire a power winch into a building and then drive right up the side of it.

The Batmobile could’ve easily been an inessential part of that game—after all, Batman can glide above the city! Why would you ever want to drive? That was the point for director Sefton Hill, who says that Rocksteady challenged themselves “to create the best vehicle in any video game ever.” Honestly, watching the capabilities of the Batmobile, it’s hard to argue. It doesn’t just add new mechanics; it builds on and enhances previous ones, too: Batman can use it to launch himself high into the air, for instance, then glide for blocks and land directly back into it in a slick animation to make navigation faster and more fun. Hill strongly recommends players upgrade that ability so the Batmobile can launch Batman even higher.

Hill says that there are loads of puzzles in the game that will see you combining Batman’s abilities with the Batmobile’s. It’s surprisingly nimble, able to morph into a “battle mode” by holding a trigger for very precise movements. He demonstrates by taking the Batmobile onto a relatively narrow rooftop and maneuvering around the corners easily, hopping to the next building with ease. Then he uses it to blow up a wall in a tower before launching Batman into the rubble to collect a Riddler trophy. Whether or not the “use the Batmobile to blow up a thing, then get out and do a thing” mechanic will get old over the course of the game is impossible to tell just yet, but the seamless nature of it all is definitely encouraging.

Rocksteady is showing off only a couple of missions at E3 2015, one of which is a Riddler race track. The Riddler has taken the events of Arkham City maybe a little too personally, so he’s gone to incredible lengths to finally get his revenge on Batman, building dangerous race tracks, hiding more clues, and taking more citizens hostage. Rocksteady promises that the game will actually explain how Riddler manages to put together some of these challenges. Now, in concept, “Riddler race tracks” sounds kind of lame, but as the Batmobile snaked its way around the ceiling of a circular tunnel to avoid a missing platform in a move straight out of Men in Black, I began to see the appeal. It’s a deadly obstacle course that gets deadlier with each progressive lap where the bottom can drop out on you at any time. You won’t immediately fail—it’s just a quick reset if you fall—but it eats away at your precious time. Hill says that the later tracks can be really challenging. Again, it’s another aspect of the game that’s easy to see how it could get old very quickly, but the Batmobile overall looks like a fantastic way to shake things up. 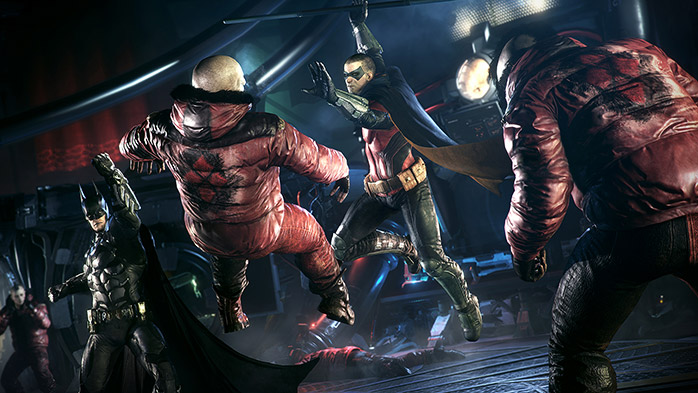 The Batmobile isn’t the only new addition to the game, though. Rocksteady is clearly sticking pretty close to its established formula, but there are some key differentiators. During combat, for instance, Batman can now fight alongside Nightwing, Catwoman or Robin depending on where you are in the story. He can tag them in by initiating brutal combo takedowns where Batman will toss a thug and his partner will jump in from offscreen to finish the job; at that point, your control will switch to that other character until you initiate another combo takedown. We’ve been able to play as these characters in previous games before, but never like this, so it’s a welcome change to keep the fighting fresh. Rocksteady’s combat is still the best around, but four games in, it’s nice to be able to switch to another character and play style, even briefly.

As well, Rocksteady is looking to keep even series veterans on their toes during the game’s predator sections where Batman systematically hunts down and takes out an entire room of thugs. In the past, players tended to rely on the gargoyles that Batman could escape to a little too easily, so occasionally, you’d walk into a room and all the gargoyles would be outfitted with proximity mines. Rocksteady wants to take that further here with “adaptive AI.” Now, the game’s titular Arkham Knight will watch the player’s behavior and punish overused tactics. So if the Arkham Knight notices Batman hiding in the vents a lot, let’s say, then he’ll tell his guards to watch the vents, forcing players to change up their tactics. If he notices players sneaking up behind guards to take them out, the Arkham Knight might advise them to set up sentry guns to watch their backs. 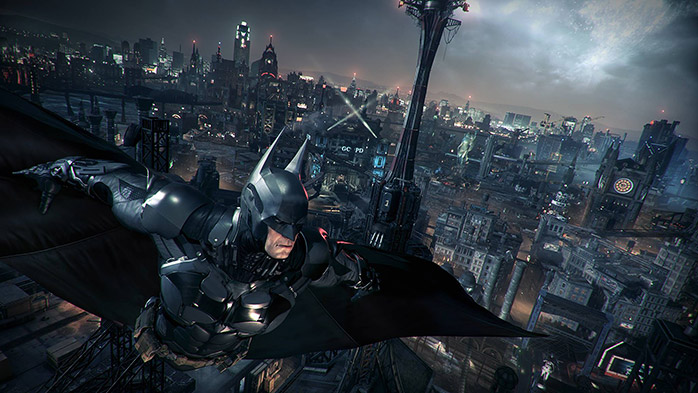 Hill promises that Gotham being “at least five times bigger” than Arkham City hasn’t affected the level of detail and love poured into the world, but I’m not sure that will do much to assuage players who already didn’t dig the increase in size over the asylum. He points out the richness of the textures here, but it was never a question of fidelity; what those players missed was the incredible denseness and craft that went into each room. That was never something that bothered me personally, so the idea of being Batman in Gotham City is nothing but good news for me. If only there were actual citizens around instead of streets completely lined with criminals yet again.

The most exciting games coming out of E3 tend to be the ones furthest from release, but Arkham Knight is coming out next Tuesday. That’s a double-edged sword, though. On the one hand, I’m ecstatic that I’ll get to dive in next week; on the other hand, every time the frame rate dipped or the game hitched (briefly, but noticeably) it stood out that much more. When a game is months or years away, it’s easy to forgive technical hiccups, but Arkham Knight is a done deal. If we’re seeing hitches and dropped frames now, that’s a pretty good indication that we’ll probably see them next Tuesday as well.

Still, Batman: Arkham Knight puts on an impressive show, and I’m eager to get my hands on it when it launches on June 23.