A few years have passed since Fun Bits Interactive brought us its real-time action and strategy game Fat Princess. Now the team is ready to deliver another over-sized adventure with Fat Princess Adventures. This new entry to the series really takes the cake and eats it too; a lot of it.

Fat Princess Adventures is a co-op game that can be played with four players on the same couch or online with anyone around the world. It keeps the same combat style and character classes as its predecessor but is more toned down to have a leisurely and enjoyable experience. On this adventure you’ll assume the role of one of four different fighters: the warrior, mage, engineer or archer each with their own specialties. There’s a lot to do with cake in Fat Princess Adventures. You’ll want to eat it if you want to heal but if you eat too much you’ll not only get a huge belly but a big boost of power too. You’re trying to get through each level to face bosses and save a princess which will be fun but not easy.

There is a lot of emphasis on customizing your characters. Tons of different gear and loot you collect will influence your attributes. Fat Princess Adventures also implements a personality type which depending on what you choose, will influence the game’s storyline and dialogue. Once you choose a character, you won’t have to worry about being stuck with it forever. After every checkpoint you’ll have the option of switching between classes. There can be all four of the same type of fighter if you feel the strategy calls for it.

Fat Princess Adventures sure gets the title right too. There will be tons of levels to venture through including story mode, dungeons and even old locations from the first game. Every time you check out a dungeon, the can conditions change, even the loot. This offers a great replay value and really does well to keep every level of player content. The enemies you face will be adjusted accordingly to your levels and experience. You won’t go up against all the big bad guys if there’s only one member of your team at a high level. 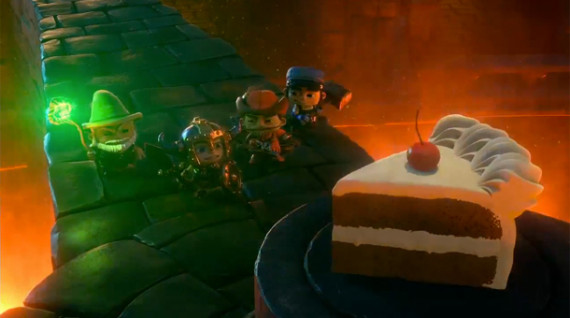 Just getting a little taste of the action will get you hooked. Fat Princess Adventures is going to be a great casual game to jump right into for fans looking to kill some time or go all out, there’s enough cake for everyone. The game is set to release sometime in 2015 for the PlayStation 4 with PS Vita cross-play to be determined at a later time. If all that doesn’t convince you to check out, Nolan North stars in the game as a chicken!