At first glance, everyone seems to be drawn to indie game Cuphead. Its absurdly elegant and charmingly exaggerated animations make it look like a modernized 1930s cartoon, just even smoother and at times more hostile. When I finally got my hands on the game, I realized all too late that those who came before me did not stop playing this chaotic side-scrolling shooter because they were bored, but because they gave up. Cuphead is hard, even more so since the build of the game I tried was only composed of boss fights. But as such, it demanded my full attention.

In the beginning of the first session, I was mesmerized by the detail put into the background of a single level. It was a fully and seamlessly animated nightclub filled with very lively patron flies. It was gorgeous, and it made sense: Cuphead grabs players with its captivating looks and style, but then keeps their attention with its relentless but surmountable challenge. Immediately upon beginning the stage, the text “Ready?” appears, followed by a flashing “Wallop!”. After that, I was dead within minutes. The nightclub level pits you against two large frogs in boxing gear, which is actually a somewhat tame scenario in this game. The frogs do a variety of wacky, but certainly deadly, attacks that range from familiar things like throwing fireballs to odd things like spitting flaming bees. The whole situation is delightful to behold and often lethal to experience. Fortunately, after several deaths, it became apparent that there was a pattern: the frogs always opened with fireballs, and then followed it up with flaming bees. Then one of them rolls to the other side of the screen so that they can do a pincer attack. Reading their attacks alone did not make the fight any easier, but it did keep me in the game and make me realize that there was a very clear way to kill those two infernal bullet-sponge frogs. 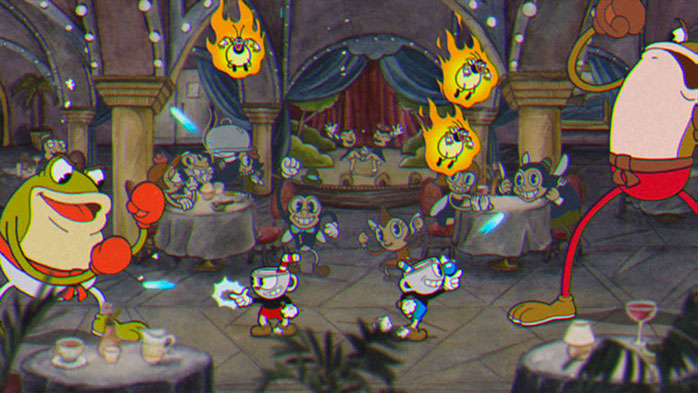 The player character Cuphead has a limited move-set. In keeping with the retro style, Cuphead normally shoots a steady stream of unlimited bullets in five directions when on ground: up, left, right and at 45 degrees in either direction. There were two weapons available at the time, a standard long-ranged single shot, and a close-range spread-shot. Playing co-op definitely improves the rate of success, but the player two-controlled Mughead only seemed to have access to the same arsenal as Cuphead. The characters can duck, run at a moderate speed and jump. Jumps are just fast enough not to feel floaty and their trajectory can be adjusted mid-air; of course your fire-rate suffers when you do so. Finally, there is a special attack tied to each weapon which is powered by a meter that fills up when firing. It is short-lived but is definitely more effective than a normal shot. The controls feel tight and reliable, but not as pin-point precise as something like Super Meat Boy. Naturally, surviving encounters boils down to the same five D’s as dodgeball: dodge, duck, dip, dive and dodge, since it is quickly apparent that 3 or 4 hits mean death in that maelstrom of pain Cuphead disguises as a cute, cartoony boss encounter.

It must be said though that Cuphead has that simple attraction that will keep players coming back. The controls and mechanics are simple and will be familiar to most. The limited range of movement and attack means there is a very high skill ceiling for those who return to its outlandish battlefields. But that is what truly draws people to Cuphead – what drew me to Cuphead. Every encounter is crazy and thanks to the old school Zelda-style world map, picking what to go through is up the player. In the beginning of the game, there is a garden with a very stressed out, and readily hostile, potato. Beating the potato is no small feat at first, and took my co-op partner and I more tries than I’d care to mention. But even after the potato was subdued, a giant insane-looking carrot showed up and started launching smaller carrot missiles at us. It was hilariously goofy but it also meant the game expected more of us, and we expected more of ourselves in turn. 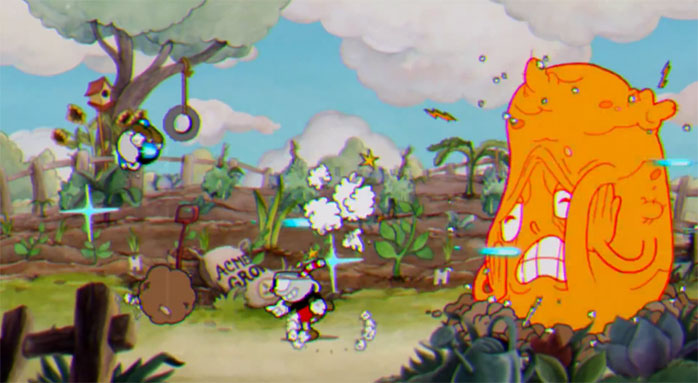 From neat stylistic flourishes like how Cuphead shoots directly from his finger, to the enemies’ relentless but readable attacks, Studio MDHR has crafted a very alluring shoot’em-up so far. Everyone sucked into Cuphead by its loony visual style and zany characters stayed to stand up to the subsequent challenge of battling through its crazy world. Often times, they gave up only to come back for more, because there is a method to Cuphead‘s madness. Every boss has a torrent of ridiculous attacks but also a defined pattern that dictates them. Memorizing, or even recognizing this pattern, reveals a discernible road to victory.

With success so easily in our sights, it was easy for me and many others to keep trying. Cuphead looks like it will capture people’s interests with its looks, keep them coming back with its satisfying challenge and cure any monotony with its wacky surprises, thus spurring its players forward through its impressively conceived depths. Actual levels are set to appear in later versions of the game as well, so it will not just be a boss rush. Perhaps Cuphead will build on the simple mechanics it had laid out, or maybe it doesn’t need to. More Cuphead is a good thing though, and it will be great to see what kind of creature this game becomes when the full version comes out sometime next year for Xbox One and PC.