Do you remember video games of the ’90s? It was a truly unique time where games were attempting to grow up, but doing so in the most childish ways. Mortal Kombat as well as other titles pushed the edge, eventually leading to the creation of the ESRB system which many games abide by today. Had developers felt free to continue making gory as all get out releases such as Postal and Chiller, then perhaps we would have seen a beat ‘em up at least half as outrageous as Mother Russia Bleeds. To me, it feels like the kind of game that would have come as a “me too” release after Streets of Rage, but that’s not a bad thing. In fact, for those who dig hardcore releases such as Hotline Miami this could be the much-needed next step in hyper violent, pixelated gaming. 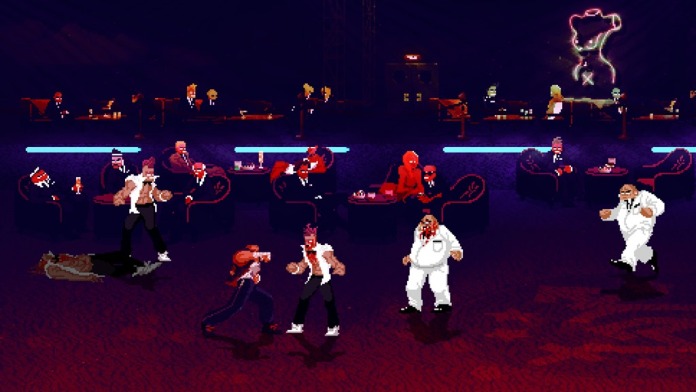 Mother Russia Bleeds takes place in an alternate universe U.S.S.R. where everything is in an absolutely state of dystopian madness. Among other things, it appears murder of everyday citizens is completely normal, as that’s what players are poised to do. Each playable character confers their own strengths and special “fatalities,” though when it comes right down to it each is about equal in its gory goodness. Gameplay feels primarily like any old school sidescrolling beat ‘em up — it’s just that the violence has been ratcheted up beyond any other titles within the genre.

It’s not just about violence either. The surgeon general’s “Winners Don’t Use Drugs” splash screen, which would have been a standard on any arcade brawler of yesteryear, is completely spit on in Mother Russia Bleeds. A key component of the game is using syringes in a variety of ways. One option is to allow the player to inject themselves which leads to a powerful buff. Once in this drugged out mode, they’re free to unleash a devastating killing blow on an enemy. Instead of awkwardly scarfing down burgers and turkeys hidden in trash cans and crates, syringes also provide a boost to health when required. I’ll admit that this aspect of the game seems to be pushing a bit too hard on the whole edgy aspect. But hey, to each their own. 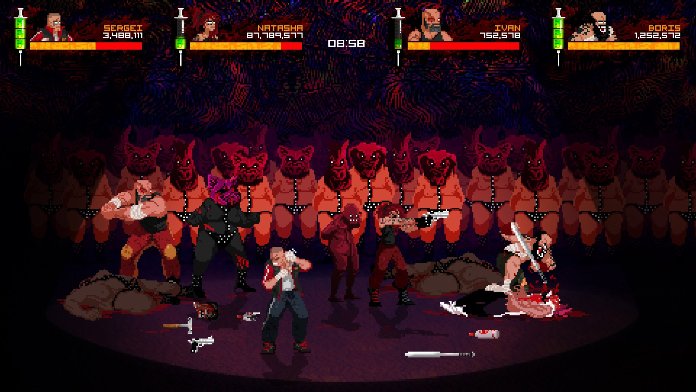 Visually, there’s a lot to take in while playing Mother Russia Bleeds. Combatants are fast, violent, and blood spurts all over the place as fights occur. It’s very comparable to Hotline Miami in terms of violence, especially when you consider how unnecessary most of it is. For example, apparently killing a dude isn’t enough unless you completely smash their head in with your bare hands. Obviously, this aesthetic appeals to players looking for something darker out of beat ‘em ups. This, along with the drug-induced trippy effects, lead to some tremendously unique moments. It’s another way in which the game proves itself as more than just a grisly visual overhaul of a classic title.

With that said, I’d like to see things pushed further in ways that make sense. Given the small demo, it’s hard to say that this isn’t already the case, though. Le Cartel Studio are pushing the envelope in a potentially great way. Enemy designs, gore and drug effects, as well as gameplay already seem tremendously polished. Unfortunately, there’s still quite a wait to dig in with this immensely bloody release. Mother Russia Bleeds is pegged for a launch in 2016 on PC and PS4.