Guild of Dungeoneering is a game that’s a bit hard to define because we’ve never seen something quite like it before. In a sense, it’s like playing a roguelike where you control things instead of the game throwing out procedurally generated stuff your way. Even that’s a bit confusing, though. Just try to do your best to forget all that traditional roguelike dungeon crawlers have taught you, because you’re about to view them from a wholly different perspective in this game.

It starts out with you and a single member of your new guild. As the guildmaster you don’t actually go out to battle yourself but send this little minion along in your stead. Once there, they basically can walk about where they want — but will usually follow your influence. Players actually build the dungeon by drawing cards each turn. Sometimes, cards show a room blueprint. When one appears that suits your fancy, you can drop it right down on the graph paper dungeon floor to create a brand new room. As long as it links up to the doorway of an existing room then there’s potential for your guild character to walk right on through. Again, you’re not directly controlling them though. 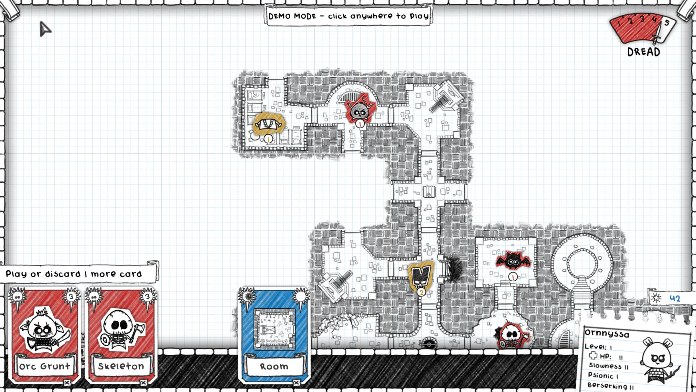 How do you get a character to follow your wishes in Guild of Dungeoneering? Simply wait for a card depicting gold or silver coins to pop up and drop them in a nearby room. Because your friends are so money-hungry they’ll run straight for the loot. Yep, even if that loot happens to be perched at the feet of a monster. Once a guild character runs into an enemy a battle is triggered, where you have a bit more direct control. Again cards are drawn but this time cards relate to attack, defense, and related battle measures. Some cards have special features which might make them unblockable, restore health, and the like.

Once a battle is completed in Guild of Dungeoneering you’re given the option of winning some great loot. You can choose from one of three cards (which change per battle) and offer equippable items, new cards, or gold. With items such as a crown or shirt your guild member will receive a benefit for the rest of the battles they fight in the dungeon while wearing it. Of course, you can choose to swap for something else if a better outfit piece appears in that same dungeon. I don’t know how many cards are meant to be available in the full game, but hopefully there’s a ton to keep all this interesting. 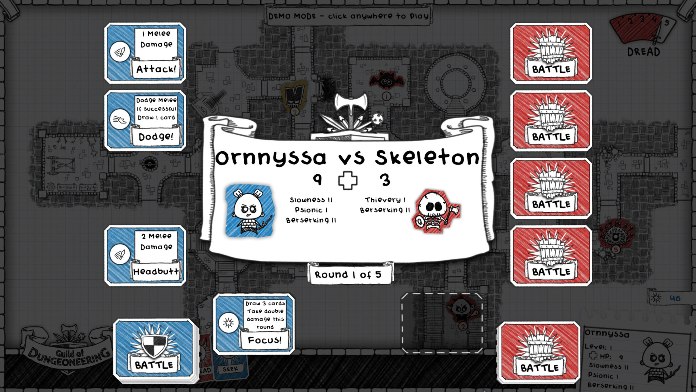 After successfully beating enemies, finding treasure, and completing the dungeon’s goal you can leave to return to the main guild. Here you expend the money you’ve made in previous quests in order to expand it. You’ll gain access to more cards for your deck and more guild members to keep on growing stronger as quests increase in difficulty. You’ll definitely lose a few guild members along the way, but luckily there’s always more filtering in to meet their doom. It appears that different character types may have different health and skills, but that wasn’t something I saw through the demo on display.

So far, things are looking quite fun in Guild of Dungeoneering. The card mechanics and dungeon creation are simple enough once you grasp the basic concept behind it all. Battles are a little hard to start with, but even those quickly become second nature after you’ve got a few under your belt. Just be sure to always prepare before dungeons which require defeating bigger, badder enemies. I’m certainly looking forward to seeing Guild of Dungeoneering in full form when it hits Steam on July 14.