The Super Dungeon Bros. rock and rolled into E3 2015 after a successful run at GDC 2015. Considering that I previewed the game back in March, I had to stop by and take a look at all the team has done to improve the game. Much like at GDC, I got to go hands-on and enjoy a four-player session. Suffice it to say, there was a lot of new content to check out.

Super Dungeon Bros. is a four-player co-op dungeon-brawler. Players will explore the rock-themed world of Rokheim and battle across three unique areas; Cryptheim, Chillheim, and Bogheim. Every dungeon is procedurally generated with over 32 million unique dungeon combinations. Super Dungeon Bros. will feature cross-platform play between Xbox One and Windows 10, and PS4 and Steam. For more details about the game, and the Cryptheim area, check out my GDC 2015 preview. 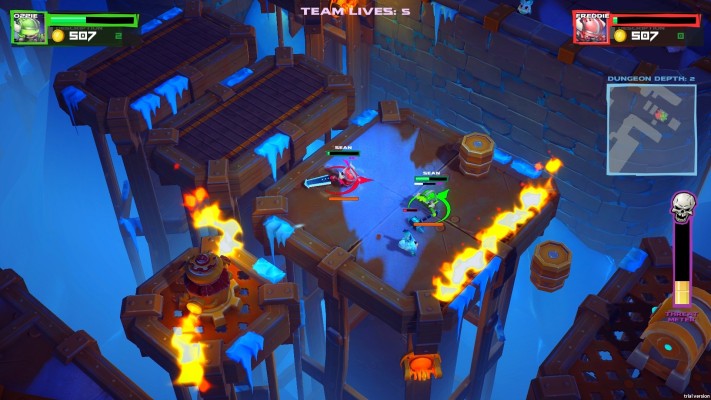 The E3 2015 demo focused on Chillheim, the second area of the game. Chillheim is under the control of The Brew Queen. She roams her halls singing twisted ballads that control her Ice Golem. Chillheim features a huge natural brew geyser with a huge brewery built over it. Gnomes are the common enemy, but don’t be surprised to encounter a few ice trolls along the way.

My demo began by choosing a Bro. Like the GDC demo, my options were limited to Axl (Blue), Freddie (Red), Lars (Yellow), and Ozzie (Green). From there I was taken to the weapon screen. Unlike the GDC demo, all the weapons are now presented as 3D models instead of 2D art. It’s a small change, but the weapons were pretty cool and the 3D models are better representations of them. There are four types of weapons – Crossbows, Hammers, Swords, and Wands – with two of each available in the demo. Developer React Games assured me that there will be more of each type of weapon in the final product. 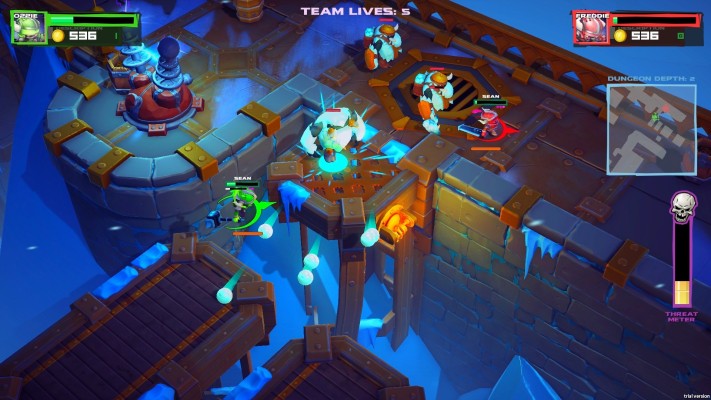 Playing in Chillheim was rather different than Cryptheim. The gnomes were much faster than the reapers and spookies of Cryptheim, and the ice trolls hit much harder than any enemy I’ve encountered. It was a huge change of pace from Cryptheim, and one that really forced the Bros to work together. Unfortunately, I was not able to get a peek at the boss, but the team did say that she will be revealed in due time.

I got to try the game on PC this time, as opposed to Xbox One at GDC. We did play the game using Xbox One controllers, so it’s hard to tell how well the controls will adapt to the keyboard and mouse. Super Dungeon Bros. is a colorful game that isn’t trying to break any graphical benchmarks, but is still a pleasant game to look at.

Super Dungeon Bros. gets better each time I play it. The game is fast, and satisfies that co-op itch that so few publishers wish to scratch. It sounds like there’s going to be a lot of content in this game, and the rock-and-roll theme is, admittedly, pretty cool. One could say that the game is rather chill. Super Dungeon Bros. is out winter 2015 on PS4, Xbox One, PC, Mac and Windows 10.