There’s a lot of work involved in reviving a dead series.  Old assumptions are challenged, new systems get created while old ones are either dispensed with or mutated, but the end result is usually pretty similar to the starting point.  Freestyle Games is having none of that, and instead is completely reinventing Guitar Hero from the ground up.  The note track is still there but everything else is new, including the guitar.  It’s great to see Guitar Hero and Rock Band being their own unique take on the rhythm genre, but the differences run deeper than just different instruments.  One of the biggest new additions to Guitar Hero Live is the streaming TV mode, and we had a great demonstration at E3 on exactly how that’s going to effect the game.

Guitar Hero TV is an always-on streaming video service divided up between multiple channels of content.  Different channels have different programming, curated and arranged by musical style, with songs chosen from a library of hundreds of tracks both new and old.  Once you’re in a channel you’re playing for a spot on the leaderboard against a number of users of similar skill, although whether you choose to care about score or just play some new music is completely your choice.  There are some good rewards available, though, if you feel competitive. 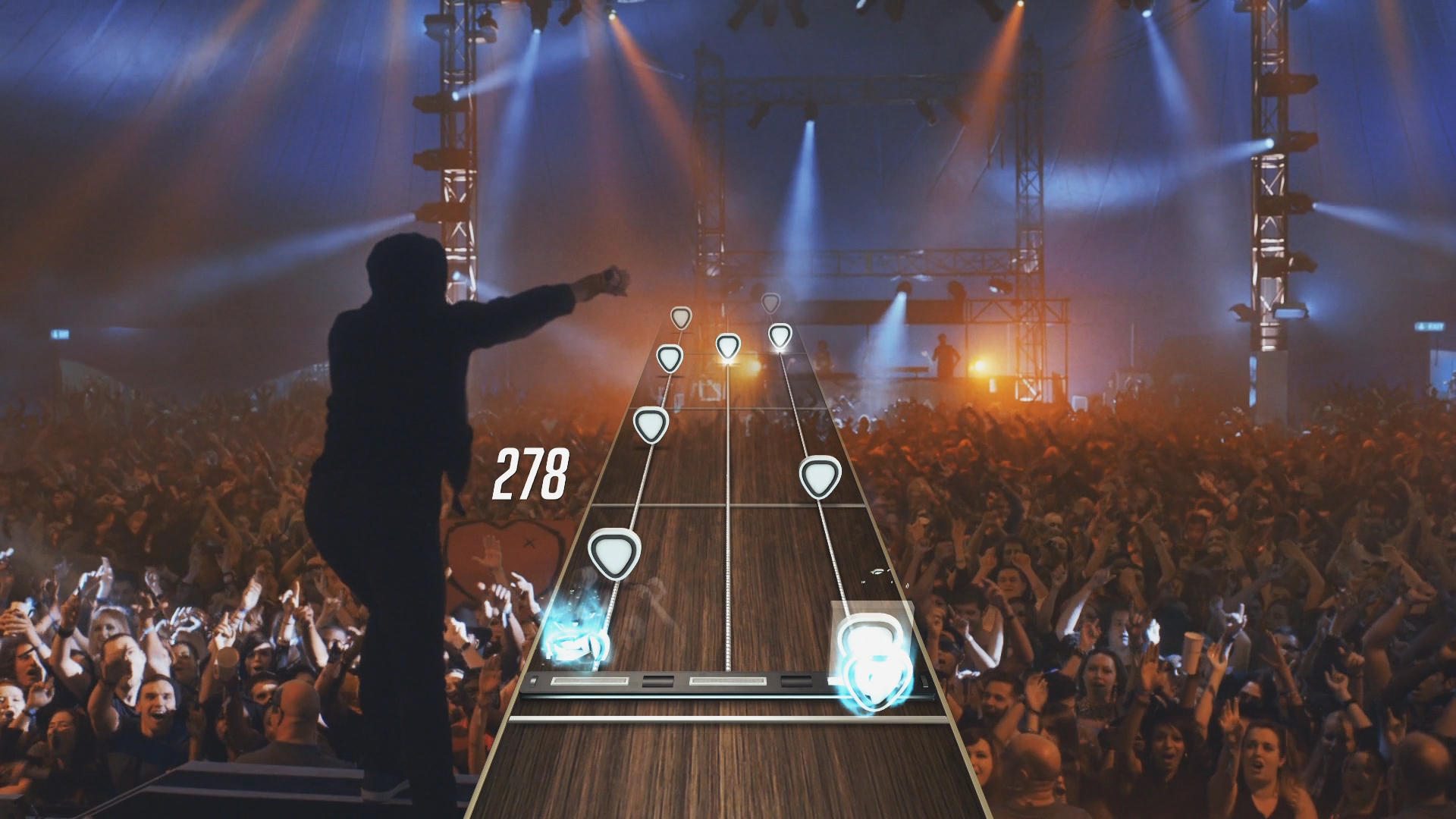 One of the in-game currencies is Plays, which are rewarded for placing on the GHTV leaderboard.  It’s fairly generous, giving at least some kind of payout for lower spots, but higher ranks of course earn better rewards.  Plays are used for GHTV’s on-demand service, with one Play getting one round of a song.  The on-demand service is the full library of songs available in GHTV’s scheduled programming, although unlike the channel service you’ll be playing this alone instead competing for score online.  If you really like the song you can buy it outright to add it to your song library, but if you’re happy to only access it every now and again then there’s no reason to spend real money when Guitar Hero provides access as a reward for playing.  It’s also a system that allows “try before you buy”, which is a huge advantage in letting the player discover new music.  A key focus of the back-end in Guitar Hero’s GHTV is discoverability, which can be a problem when there are literally hundreds of songs to choose from, but the recommendations and search functions help trim the list down to a manageable state.

In addition to the regular channels, there are also going to be Premium shows that work a little differently.  Premium content is exclusive to that channel, found nowhere else in the song list, and there are only two ways to get access- earn it or buy it.  In the example given at E3, the music was from Black Veil Brides’ new Alive and Burning concert DVD, and to get it you’d need to 3-star a set of three songs.  If you’ve got three Plays stored up you can just hit the on demand service, or  if you’re feeling patient use the search function to see when they’ll play on the regular GHTV channels, but if you’ve already met the requirements from previous playing you can just head straight in without jumping through hoops.  For those feeling both impatient and made of money, however, it’s possible to buy direct access.

No matter how you access the content, it’s worth playing the Premium shows due to the bonus multiplier they give to experience.  Easy gets 125% of normal, while expert earns all the way up 200%, but one of the payoffs of the Premium show is in character advancement.  There are also some unique customization awards if you take the top spot on the leaderboard, letting you brag with style if you get good enough.  Looking sharp is nice, but the experience  rewards are where the gameplay customization comes in. 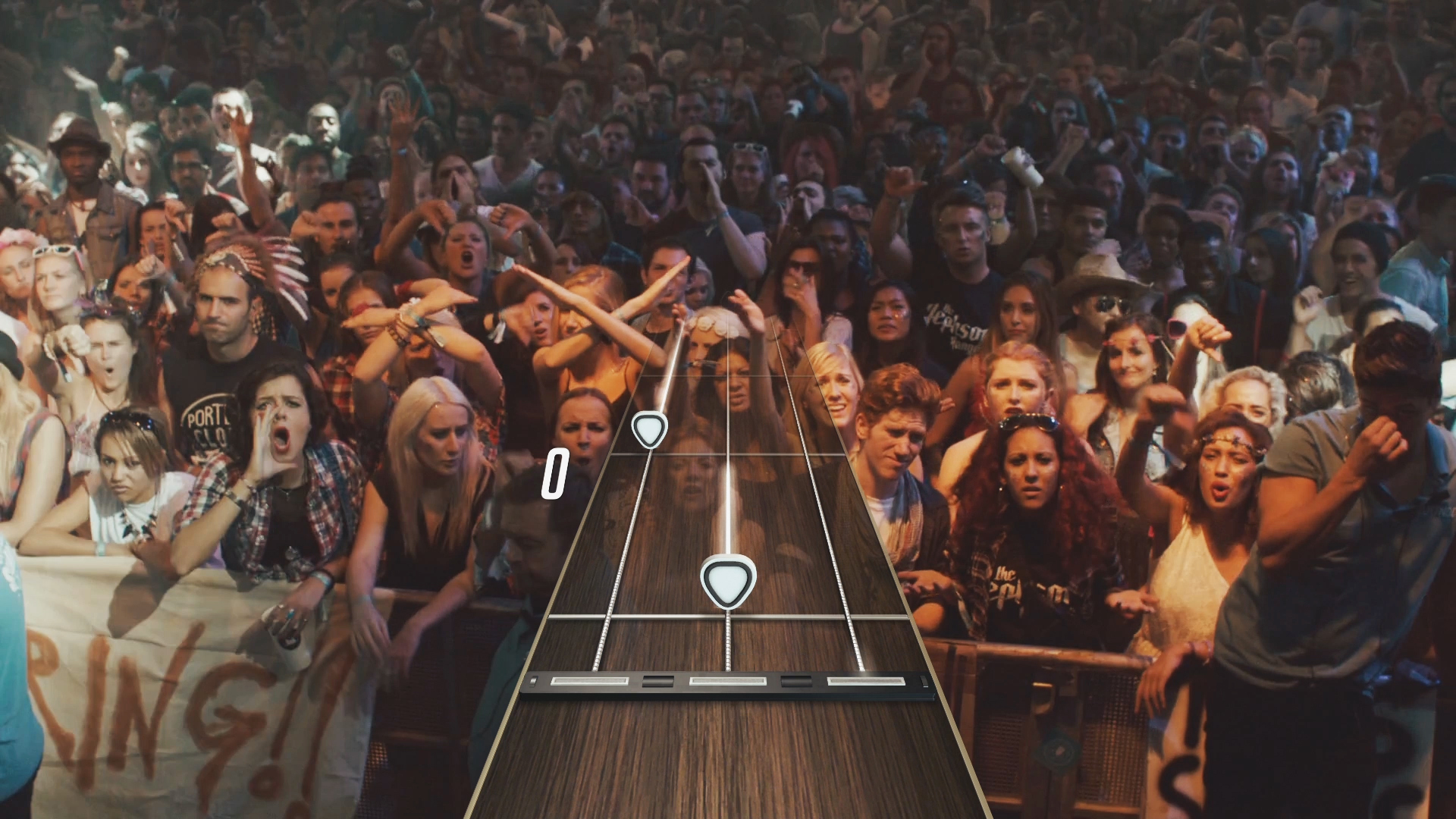 As you level up your character you can buy new abilities, and what you choose should be dependent on your own personal style of play.  The examples being shown off were an option for more Hero Power sections in a song, which is great for people who can consistently earn the ability to activate it.  For more consistent scoring, however, it might be better to choose an increase to the maximum score multiplier.  It’s important to note that, while there are microtransactions in the game, none of them are associated with character progression.  Anyone getting an advantage in scoring is going to have to put the effort in to earn it, rather than buying their way to the top spot of the leaderboard.  Other players in the GHTV group will be able to view your card and see what abilities you have, and anything you’ve got they’ll know you worked for.

Guitar Hero Live doesn’t just reboot the franchise, it completely rethinks it from the ground up using current-day tech.  There are a lot of reasonable questions left, especially in terms of how the streaming works worldwide, but if everything goes as planned then Guitar Hero Live will have an enormous amount of content available on day 1.  It’s a giant new world of rock-god dreams, and Guitar Hero Live is determined to see as many of them come true as possible.