Adventure Time has had a couple of video game adaptations over the years. Yet, for all of the work put into them, they didn’t quite feel authentic to the TV series. After all, much of the fun of watching Adventure Time is the act of “adventure” which only occasionally turns to the realm of battling enemies. Even so, previous game attempts focused on the aspect of fighting which led to adequate, but uninspired releases. Adventure Time: Finn and Jake Investigations looks to rectify the situation by actually creating something akin to a point and click adventure game.

Adventure Time: Finn and Jake Investigations is a five-episode title where players jump into the shoes of Finn. Although Jake isn’t playable (for the most part), he does tag along as a great AI buddy. Players will be able to explore areas straight from the TV show such as the Ice Kingdom and Candy Kingdom while solving a variety of object puzzles. Some puzzles will be pretty simple, requiring only one item to work. Other times players will be expected to actually combine objects together for something to occur. Sometimes you’ll even need to use Jake to make it from place to place. 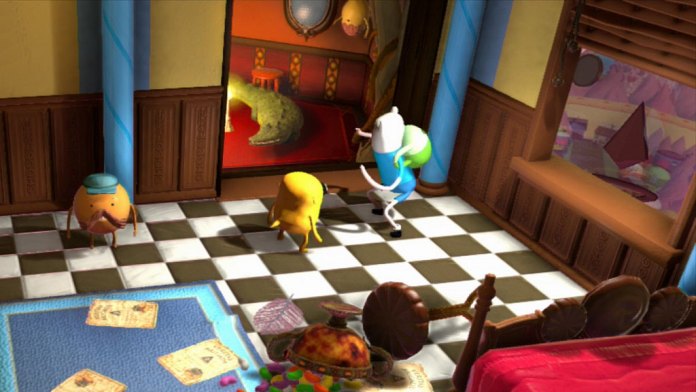 Developer Vicious Cycle Software sees LucasArts games as their inspiration, which definitely sounds like the right people to pull from when making your own adventure title. Difficulty is not meant to drive folks insane, but note that some of the titles referred to for difficulty comparisons were Sam & Max and Grim Fandango. So, if you’ve played both or either then you’ve got a better idea of what to expect gameplaywise. Personally, I think Grim Fandango is far more difficult than Sam & Max, but at least none of the puzzles displayed during the demo seemed hairpullingly difficult.

In any case, it’s worth noting that that there will be some fighting to be had in Adventure Time: Finn and Jake Investigations. These action segments play out like a brawler in an enclosed space. It’s at this time that players can activate a special move to open up Jake Form. There are four different forms which Jake can take but they all change him into a total powerhouse. Amazingly, players can’t actually lose during these segments. Instead, players are ranked based on how well they performed. The higher the ranking received the more loot granted. Loot really has no purpose but it does stockpile up in Finn and Jake’s Loot Room. By the end of the game the room should look something like Scrooge McDuck’s money pool. 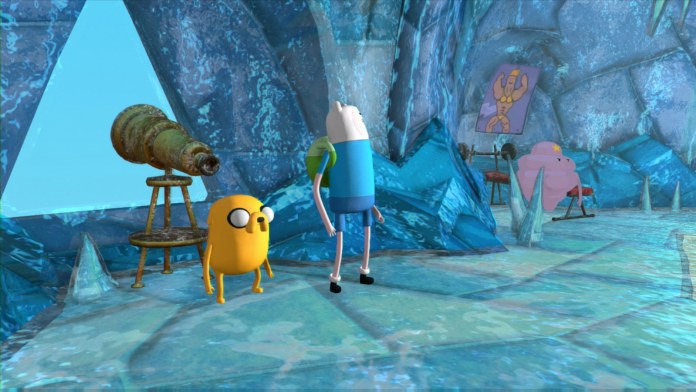 Another reason why fans should be excited for Adventure Time: Finn and Jake Investigations is that it seems poised to appeal to those who love the series most. Each and every area just seems full of references to the series, with tons of easter eggs to uncover as well. It’s shockingly cool to see so many references packed in, and serves as a great reminder how fun the Adventure Time cartoon is. There will be 40 characters in the game and each will be voiced from their actual voice actors. This is huge news for fans who love not only the series’ art and storyline but also voice talent.

Adventure Time: Finn and Jake Investigations is going to be a five episode game, but that doesn’t mean it is like a Telltale adventure. The game will launch as a complete package with five episode stories within it. With that said, there is the potential that more episodes may launch later as DLC. Adventure Time: Finn and Jake Investigations is planned for release this fall on a massive amount of consoles. Yes, it’s coming to PC, PS4, Xbox One, Wii U and 3DS, but it’s also charting a path toward last generation hardware as well.