Wattam. I still don’t even know how to pronounce it properly. Even so, I watched throughout E3 as multiple players sat down on the beanbags in the IndieCade area in order to give it a shot. Their first times all seemed very similar. No one knew quite what to make of Wattam even when a member of the development team explained tidbits throughout the demonstration. Honestly, those words seemed to go to waste. After someone began to play they slowly picked it up. Slowly but surely they played and understood what was going on while passerbys could only stare with confusion before walking on.

For those who stayed in order to learn what exactly Wattam is, well, we were given an amazing little experience. I’ll do my best to explain what all was going on via text, but it’ll sound like a whole lot of nonsense. Basically, players jump into the game and can control any little character which is situated atop a flat plane. At the start there’s this fellow called the Mayor and others such as a big tree and cloud. Each character has their own ability. For example, the cloud can rain, which in turn causes flowers to grow on the grass. But hey, you also have a lawn mower, so maybe you can cut those flowers and excess grass down. 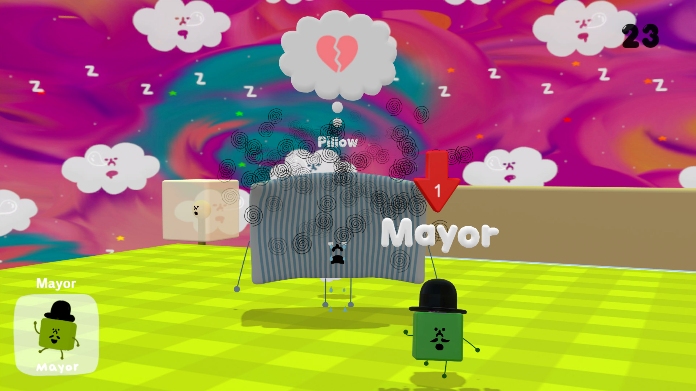 Character abilities interact with others in a huge variety of ways. And why do you need to experiment? Because, the goal of Wattam appears to be linking as many characters together as possible. Each stage seems to have a goal amount and so you must work to make that happen, even when there aren’t enough characters on screen. How do you make more appear? By experimenting! The chain of events which most charmed me involved the Mayor. First, he ate an apple. Then, he pooped. At this point a toilet flew on screen. By controlling the toilet you could make it flush the poop — but then a golden poop appeared! See? It sounds utterly ridiculous but is fantastic in action.

Although Wattam can be played alone, it was most often being demoed with two players. This makes sense given the focus on connectivity. With two players two people can work at discovering how to create new characters and link them up. They can then combine each other’s links by either standing on top of each other or holding hands. Design decisions like these are absolutely adorable and work perfectly when you factor in the whimsical art style on display. 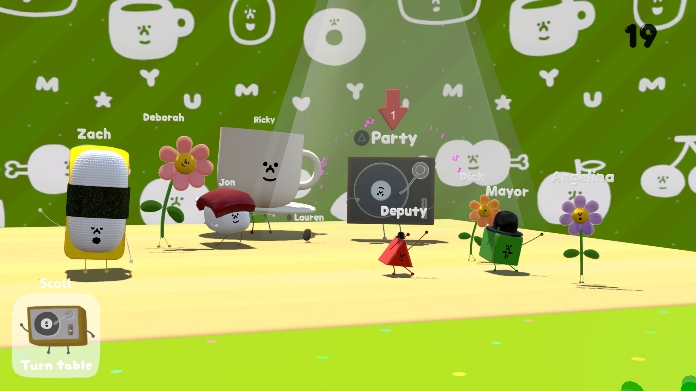 Everything in the game is 3D, but it features an art style very reminiscent of colorful, simplistic children’s books. Characters come in all shapes and forms, from sushi to turntables, and each features a cute little smile. As the game progresses you must solve puzzles like how to stop characters from falling asleep when by a pillow. Should you feed them coffee or get that turntable spinning some tunes? When a party was stated by the record player it was hard not to smile. The spontaneous disco had bright colors and affected the cute characters in ways that were both predictable but really cute. The graphics are what stopped passerbys even if they had no idea what was happening.

Even when you explain the basics, there’s still a lot left to be desired with “selling” Wattam to people. If you want someone to love the game you simply need to put a controller in their hands and ask them to play. It’s in actually exploring the wonderfully weird world of Wattam that you can truly understand how special it is.