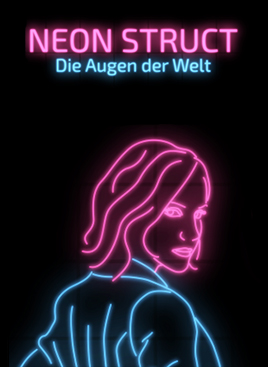 Guns- who needs ’em?  Not Jillian Cleary, a former spy on the run from her old employer after being framed for treason.  Bond may kill his way through movie after movie, but Cleary is all about stealth, sneaking and getting in and out without a trace.  She’s got a few nice tech toys to help her along the way, of course, but they’re in very limited supply.  Patience and darkness are her main weapons, and seeing as hardly anyone in the cyberpunk brutalist future ever turns on a light, it means she’s well armed.

NEON STRUCT: Die Augen der Welt is a game of subtlety and sneakiness.  While the plot revolves around Jillian Cleary working against a conspiracy to enact constant global surveillance (“die augen der welt” means “the eyes of the world”), she does this using minimal force, and that only if being sneaky isn’t working out.  Stun grenades make guards temporarily woozy, and if you don’t mind getting a middling end-of-level grade you can even knock them out from behind.  A true spy, however, moves silent and unseen past any threat the levels throw against her.

Every level is a compact open space to explore, filled with interconnected buildings that feel believable despite their blocky style.  Rooms tend to be arranged in a semi-logical style off hallways that connect to each other in ways that offer multiple paths through each area, with plenty of vertical space to explore as well.  Admitted, that freedom of exploration is made more difficult by the guards wandering by, but fortunately they’re properly dumb in that “video game guard” kind of way.  They patrol their area back and forth, and if they see you then a good percentage of the surrounding guards are instantly alerted as well, but so long as you stay out of sight and keep quiet you’re perfectly safe. No cover?  No problem, because dark shadows are everywhere and if you keep the light meter bottomed out Jillian is effectively invisible.  Hidden in a shadow at the intersection of two buildings or just hanging out in the middle of a hallway watching the guards go by, a shadowed Jillian is undetectable by guard, security camera, or robot. 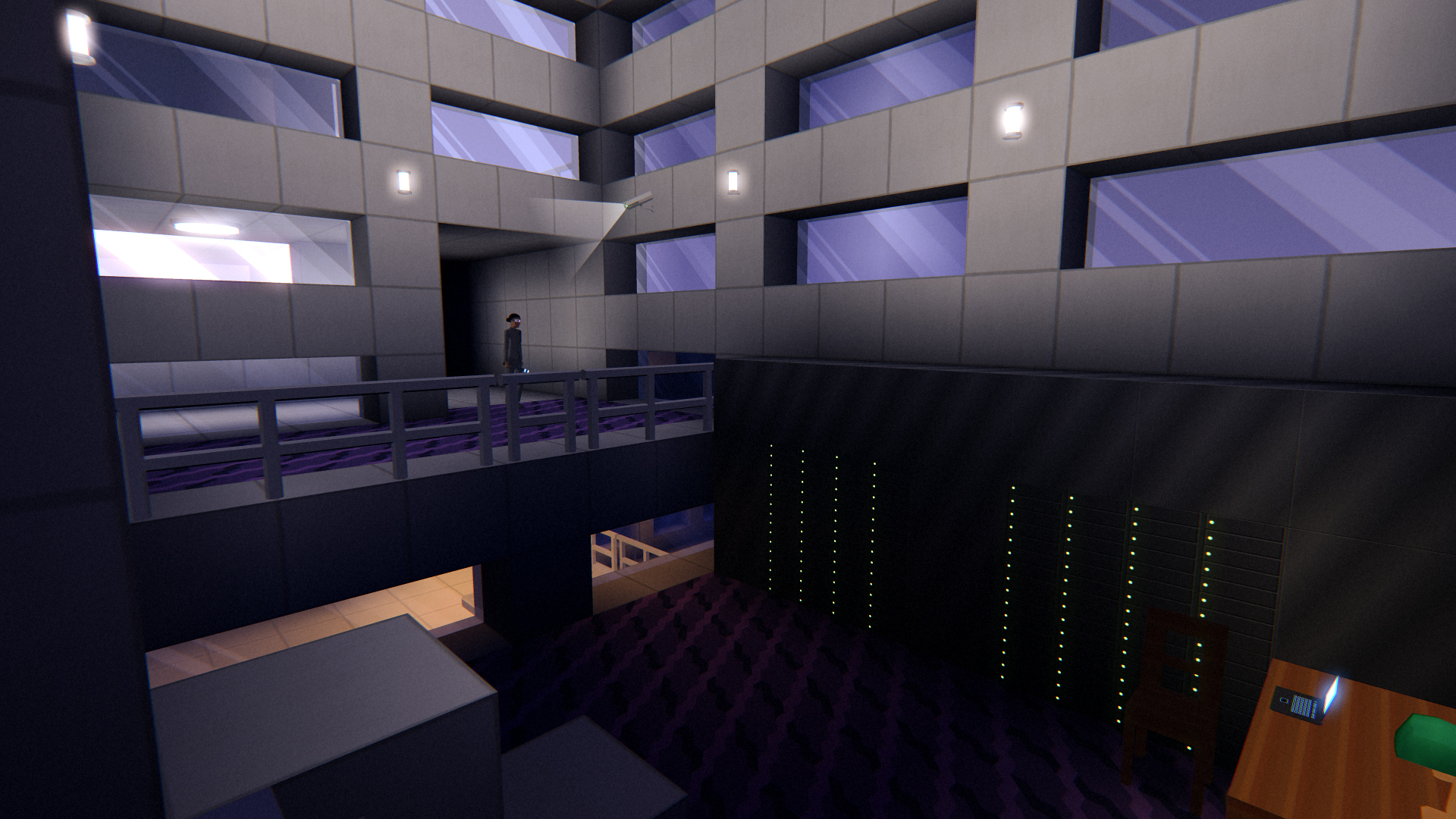 What this ends up meaning is that you’ll find a dark spot and hang out there, keeping an eye on the guards and an ear open for the telltale whir of a scanning camera, perfectly safe as you take your time waiting for the right moment to move.  The stealth action is initially tense until you realize that, no, nobody is going to see you if you pay attention, at which point it’s time to take action.  Sneak past the guard to the next shadow, carefully hack a control panel or even the camera itself, and keep an eye out just in case the timing wasn’t quite right and someone sees you.  Jillian is defenseless when seen but also fast, so running away and hiding until the situation cools off is the best way of dealing with discovery.  She’s also noisy when running, though, so for normal movement in unexplored territory it’s best to walk crouched for the silence bonus.

While sneaking is always the best plan, there are tools available to help out in tight spots.  Every level has five geocaches to be found, and each awards a token you can throw to create a distracting noise.  There are also stun grenades, darkness grenades that suck the light from a limited area, stealth stims, speed stims, and other toys and tools to find and exploit.  They don’t come easy, or cheap when you can buy them, but they help when you’re feeling impatient.  Honestly, though, I found most enemies and situations could be dealt with by patience and carefully managing the shadows, but having a spare grenade to provide an extra bit of cover for when the guards just don’t want to move out of the way is always handy.

Not every level is about dodging guards, though.  Interspersed throughout are full sections of the game where you can walk around, talk to NPCs, and maybe buy a few items off the black market if you complete a bonus quest to find a willing seller.  The levels of Neon Struct actually feel like ones where people can function, with places where people live, work, and hang out, and not all your time there is spent hiding from everyone.  There are a few spots where you’ll need to think carefully about what you say or who you reveal yourself to, and the wrong dialogue choice can bring in extra security on the next mission, but if you think like a spy on the run and choose your response carefully it should work out fine. 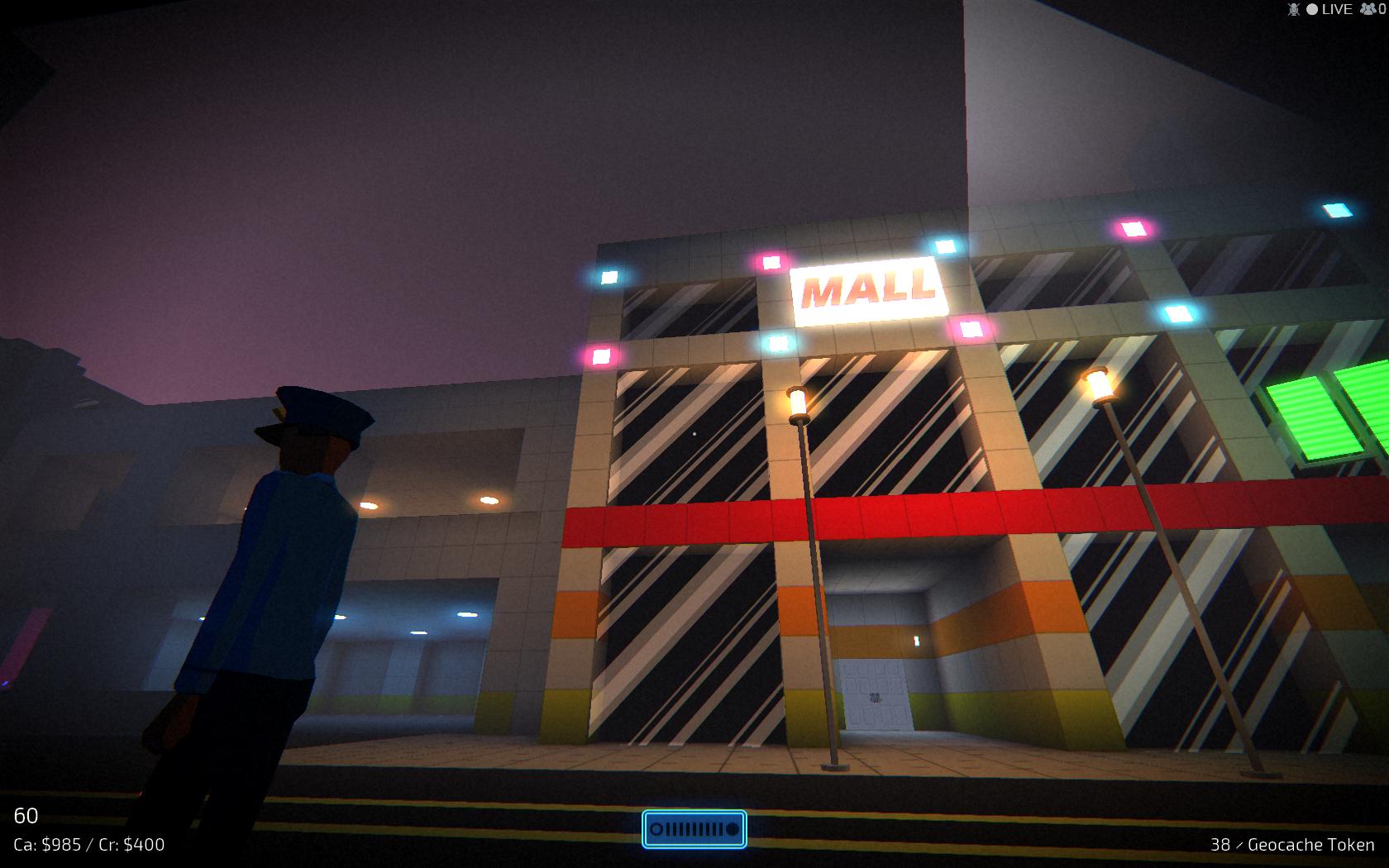 Neon Struct isn’t a perfect game, and technically its main gameplay focus of stealth is fairly simplistic.  Enemies aren’t that smart, darkness is overpowered and once you’ve learned its rhythms it’s very easy to remain undiscovered, or at least not get caught if you’re seen.  It makes up for this by being excellent in many other ways, most notably in the level design and world building.  Jillian Cleary is only one of a number of characters in this story, each with a part to play and not always a clear one.  The future is a complicated place and the choices necessary to shape it aren’t easy.  It makes a nice change, though, that none of the choices are “Do I kill this person?” because that’s simply not an option here.  Jillian is a very human spy and, like most people, isn’t going to kill a few hundred people to get what she wants.  Sneaking in shadows, carefully timing her movements, and maintaining complete situational awareness is more her speed, and slipping through the dark like a ghost means you don’t ever have to worry about firing a shot.  Weapons, after all, are for people who get caught.