The platforming genre has seen a remarkable turnaround in the past few years. After years of neglect due to publisher insistence on making every game in 3D, the 2D platformer has finally returned. Of course, there is always room for brand new IPs. Shift Happens may have a punny title, but its also a pretty good platformer. I recently sat down with Shift Happens and came away pleasantly surprised.

Shift Happens revolves around Bismo and Plom, two individuals linked together after an accident. The goal of the game is to find a way to separate the duo. I began my demo in a laboratory where I was immediately introduced the to the game’s primary mechanic; Shift. 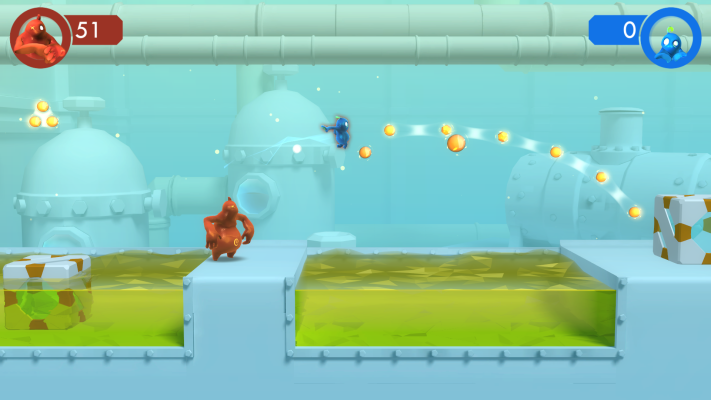 Bismo and Plom’s ability to shift their mass between them is a key part in solving the game’s physics based puzzles. For example, I had to absorb the mass in order to pick up my partner and throw him onto a high ledge. He then absorbed the mass to become big so he could catch me in mid-air and pull me to the high ledge. I recall a particularly challenging physics puzzle involving a box. Basically, the big player stood on a plate to release the box, and from there I had to jump, shift mass mid-air to be become the big one, and use that mass to knock that box onto the ledge. Completing the challenge earned me a gold star.

The level was rather short and simple (it was a very early level from the main game), but I got a good feel for the type of gameplay Shift creates. Most importantly, it was a fun and rewarding experience.

The game is primarily built for two player couch co-op, but developer Klonk is mindful of those who would rather play solo. There are two sets of levels in Shift Happens; a set for co-op, and a set of single player. These single player levels are completely separate from the co-op levels, and specially designed for the solo experience. Online multiplayer is a feature that Klonk is looking to add to the game. 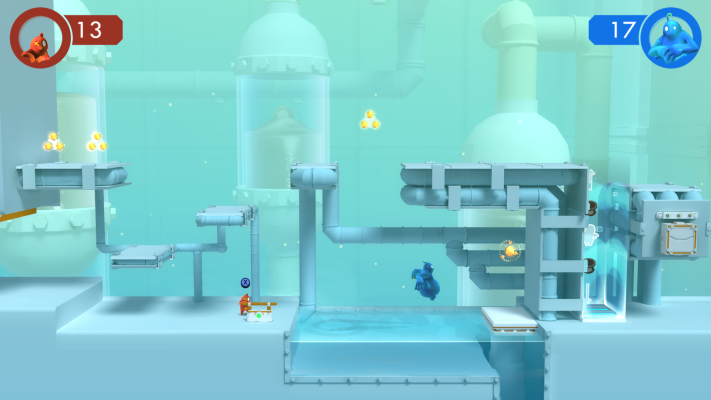 Shift Happens uses a pretty nifty art style that blends a cartoon-ish look with a clay look. It looks pretty unique and gives the laboratory level a sterile look. The developers promised that there will be a variety of different levels in the game. Bismo and Plom look pretty cool with the Shift animation looking particularly snazzy.

The success of Super Meat Boy, Braid, and Fez among others proves that gamers are hungry for more 2D platformers. Shift Happens could very well be the next big platformer. It has its own interesting mechanic, it can be played solo or co-op and it has its own unique visual style. Shift Happens may have a clever title, but it also has interesting gameplay. We’ll see just how big the game can get when it launches sometime in 2015 on PC, Mac, PS4 and Xbox One.