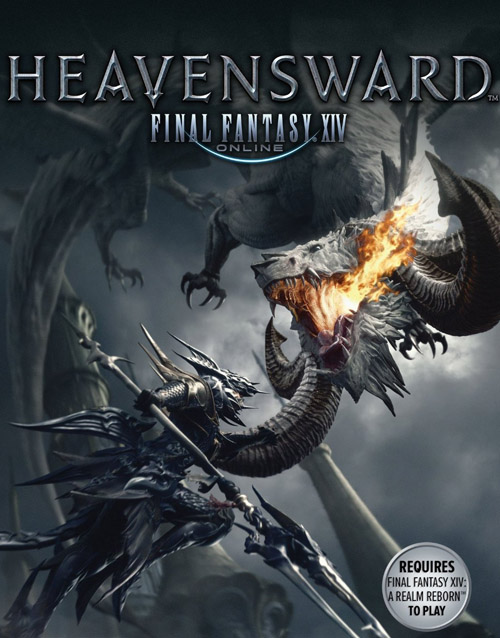 Final Fantasy XIV has had such a strange track record. The original release nearly crippled Square Enix due to its immense cost and abrupt failure, but the Japanese company was able to throw a Phoenix Down on itself and be reborn with A Realm Reborn, creating something that could easily be considered one of the best MMOs currently available. It’s one of the very few MMOs that currently maintains its subscription-based model while others go free-to-play, not to mention adding new story-related content every couple of months. But it’s back into the fray once more, as Final Fantasy XIV has its first major expansion pack that promises an exceedingly lengthy campaign and even more side activity to partake in. With eight new areas to explore, eight dungeons to fight through, five trials to team up on, three jobs to grind and a brand new race to replay as, Heavensward aims to give players a bang for their buck.

It should be noted that Heavensward is almost entirely end game content, so those looking to jump right in without having completed everything up to update 2.55 will be in for a rude awakening. With that said, there are some new pieces of content that will affect new and veteran players alike. For one, there’s a brand new race called Au Ra. They were introduced in the end game content (or at least one character was) that Square Enix began rolling a couple months at a time after A Realm Reborn’s initial release, but finally we are able to play as the race. There’s not much difference to these individuals other than a new look, and they certain have a special design. There are two clans for the Au Ra, one with bright scales called Raen, and another with dark scales called Xaela. Raen are, at least from the beginning, built more towards magic abilities while Xaela are more of a strength clan. The only complaint I have with this new race is that they don’t play much of a role in the actual story. Yugiri makes a reappearance, but she is basically the only Au Ra to appear in the lengthy campaign. There seems to be a big missed opportunity, but I suppose it’s something that was left for future content. 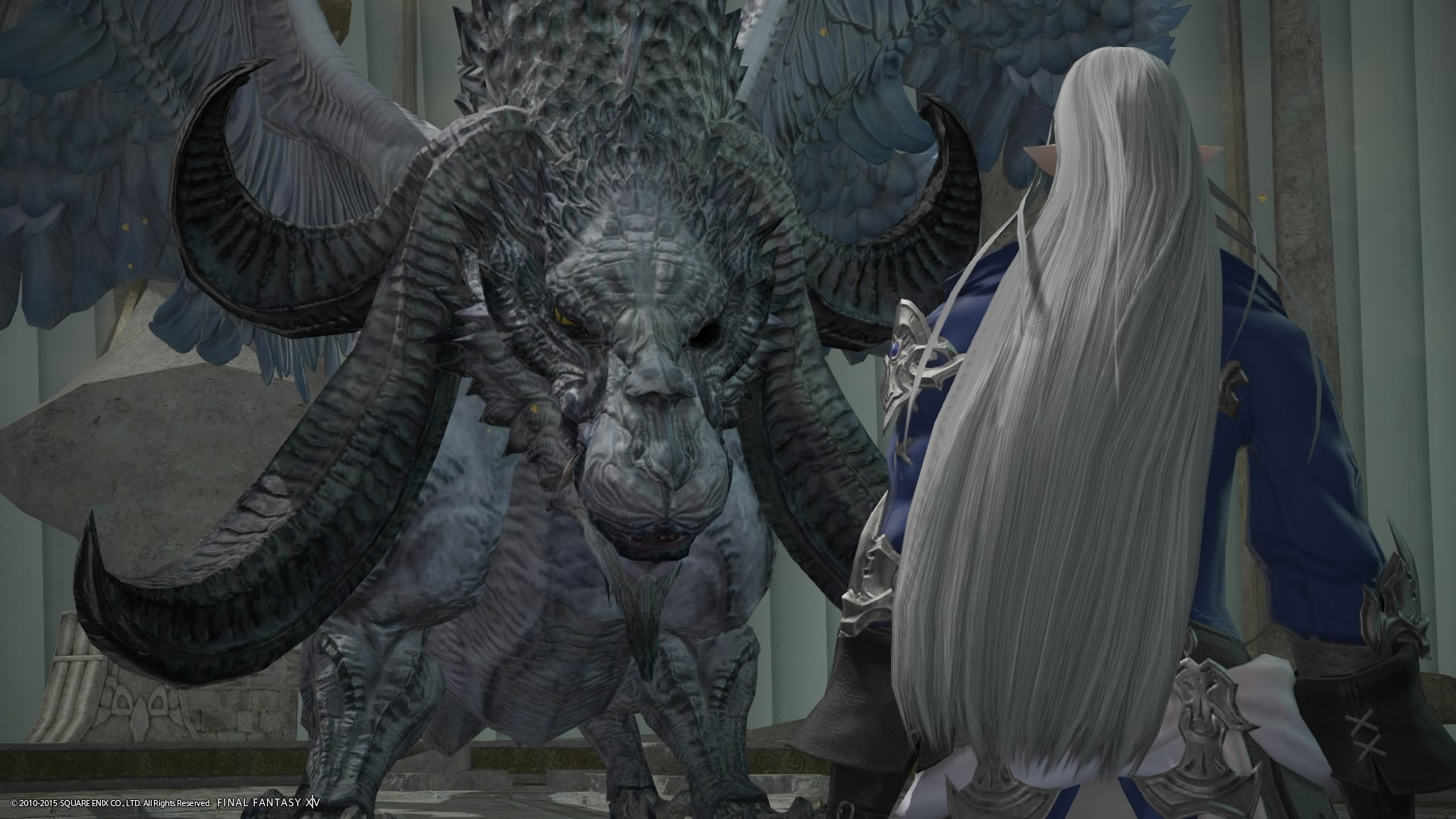 The way Final Fantasy XIV: A Realm Reborn update 2.55 ended left us with such an unbearably intense cliffhanger. So many characters known and loved for the past five years seem to have disappeared or potentially met their end. Unfortunately, only three of these individuals have their fates revealed, with the remaining cast of characters still left to the unknown. Heavensward isn’t about them, though; it’s almost an entirely segmented story that takes place in a whole new land partially separate from the events of A Realm Reborn. There are ties, though, as the Garlean Empire does make an appearance and the Ascian organization is still looming in the background, but for the most part, this is about the new realm of Ishgard and their struggle with the 1000-year war that has been raging on against dragons. It’s also about regaining the status as the Warrior of Light, regaining the blessing that was taken from you.

The story of Heavensward is by far the most captivating aspect. The two factions (Ishgardians and dragons) seem to live in a grey area where there are some evil doers amongst them, but most of them merely fight to protect their own kind. It’s a thousand year war where hatred between both sides rages on, but as a neutral party, you get to explore the truth behind how it all became to be. The campaign is lengthy, running us close to seventy hours to complete the main story and all of the side quests, although we only lightly touching upon the end-game dungeons and trials. Progression is one of Heavensward’s strong points as, so long as you do all of the side quests available, there isn’t much of a need to grind. There were only two instances where we needed to go back into a dungeon and grind to the next level. There is just so much new content here that you won’t find yourself bored or underleveled. With that said, the mission structure for most of the campaign is pretty basic. It boils down to either collecting items, fighting enemies or simply talking to someone. There is one refreshing quest where you have to sneak up and use an item on a certain enemy, but that was a onetime alteration. It’s standard for an MMO as it doesn’t reinvent the wheel, but it could have gone with a couple more interesting quests. 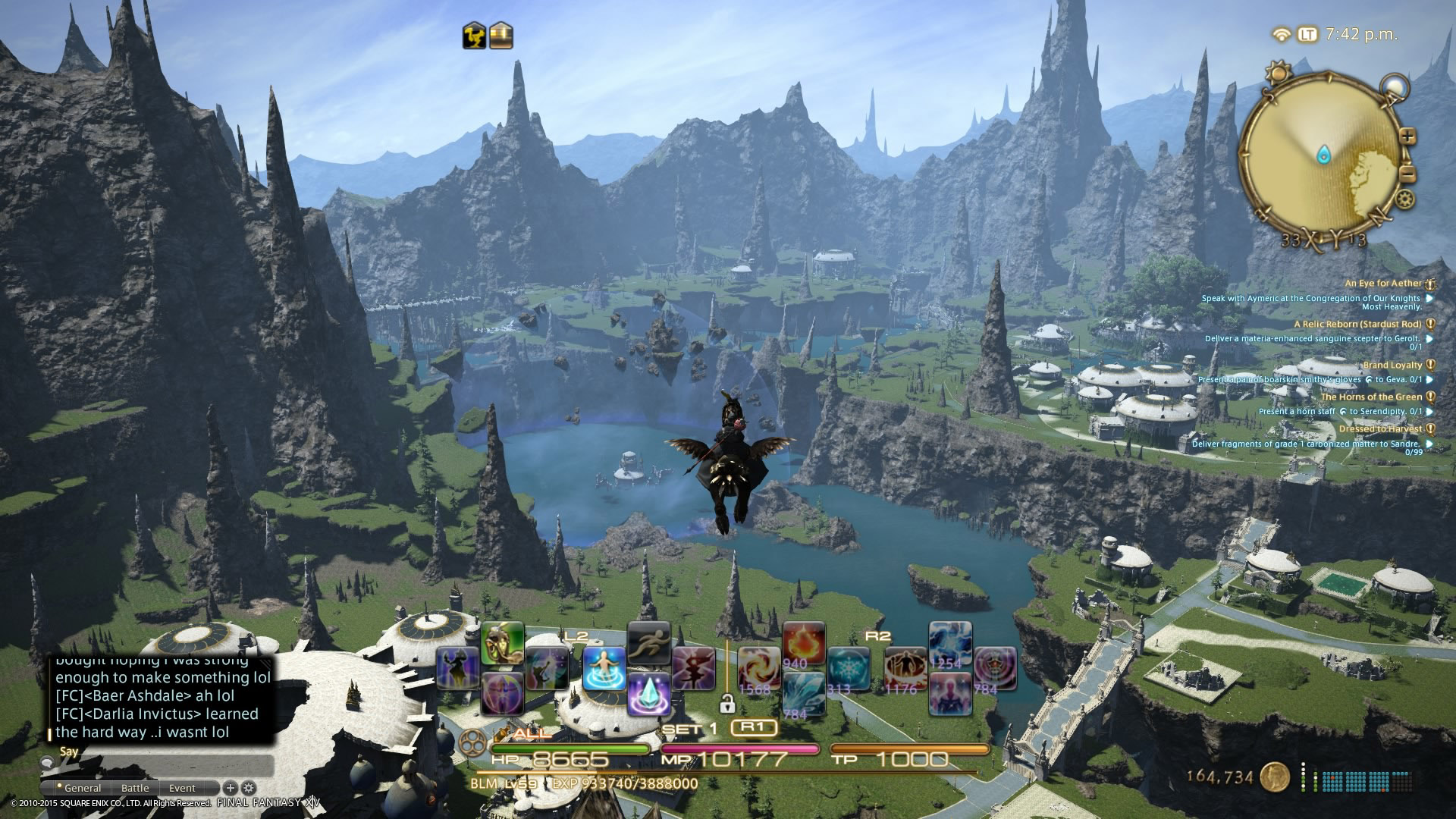 With that said, what shines the brightest are the dungeons and highlighted side quests. There are a number of one-off side quests that can be completed simply for experience and Gil, but there are multi-tiered missions that involve comical and emotional twists. These not only dole out high quality equipment and Materia, but also tell stories that you actually want to dig deeper into and characters you want to see more of. Each area has one or two of these, so there’s a good deal of content to keep you involved. Dungeons on the other hand are pretty much what we’ve come to expect. You roll through different area that have variations of enemies and environmental models, while facing three bosses that put up a good fight. There are a solid eight new dungeons to venture through, taking anywhere between twenty to forty-five minutes each depending how well organized the team is. The bosses are easily the center point of the dungeons as most of them require a good deal of thought and care to take care of them.

But if you’re here for the big, hulking bosses, then the new Trials are for you. Trials are singular boss fights that A Realm Reborn nearly topped out at 30, each involving incredibly complex challenges. There are five to be found in Heavensward, three that are a part of the main campaign with two Extreme Trials available at the end-game. Among them, The Limitless Blue is by far the most fascinating, essentially putting you against the clock as you face a massive enemy that can destroy the ground you stand on. While there are some straightforward mission to be found, there’s just so much quality content to experience in Heavensward.

While there’s plenty of exceptional story-related missions to play through, Heavensward also introduces three new jobs. These are broken down and balanced splendidly, introducing one ranged DPS (Machinist), a healer (Astrologian) and tank (Dark Knight). The Machinist is pretty straight forward in its combat nature, having various abilities that are used at an offensive, long ranged measure, while at the same time can call upon a turret that will attack enemies or aid allies. The Dark Knight is also relatable to other tanks with variations, such as using MP on top of TP and having his own combo set to help debuff and agro enemies. Finally, the Astrologian is much more focused on healing and buffing other players, so knowing the various classes you’re working with will go a long way. Each are strong additions to Final Fantasy XIV, giving even more variation to the already remarkably large lineup of jobs. 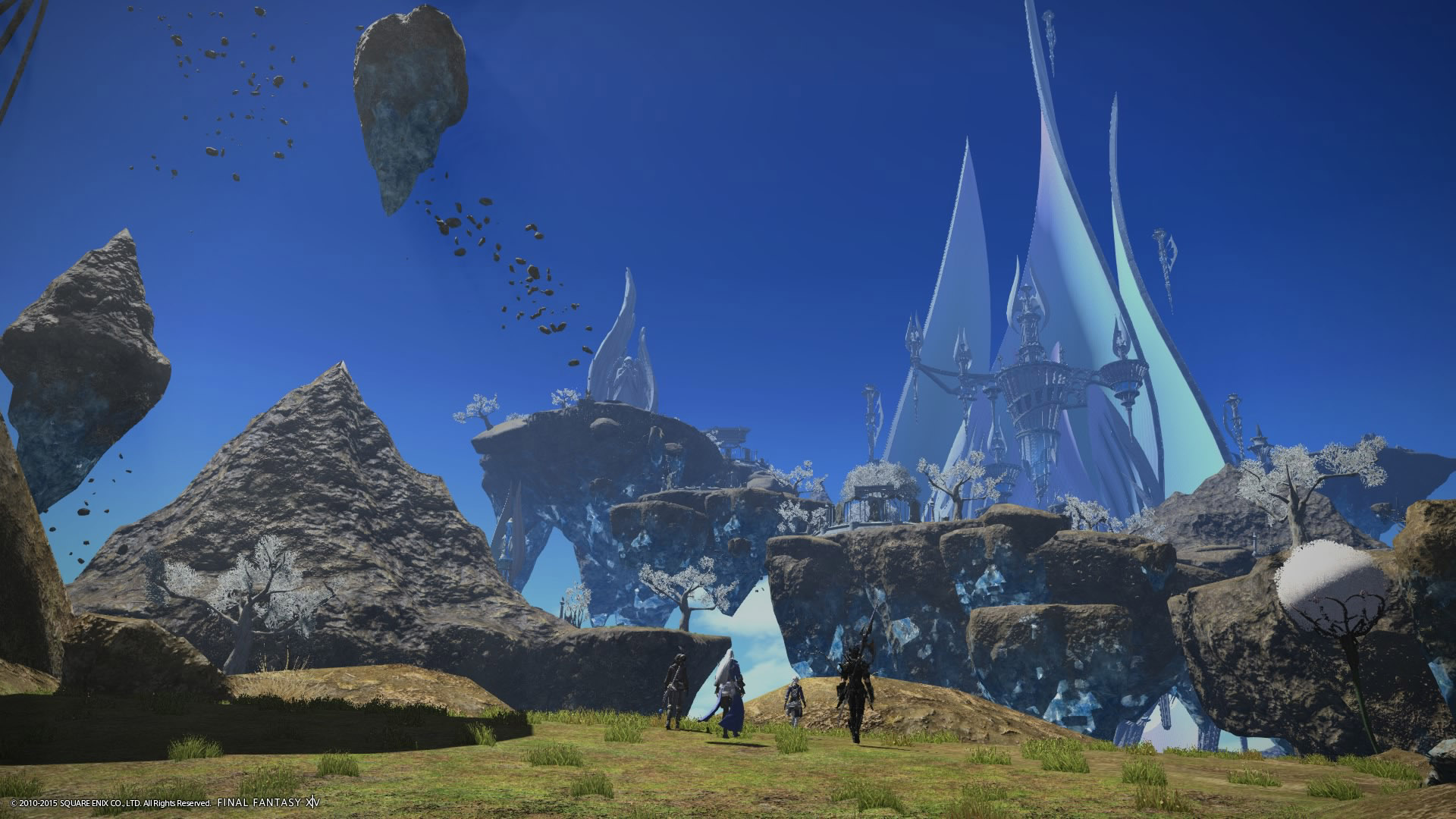 Coinciding with the level cap increase, there are new job-related missions to take on. So if you play as a Ninja, Summoner, Bard or anything else, there will be six more missions available to learn new skills and obtain additional story. The rewards themselves are good, but unfortunately overall, the quest themselves aren’t particularly amazing new additions. I roll as a Black Mage and the questline there is relatively lackluster. Up until the Level 60 quest, it’s mainly comprised of going to a certain location, confronting one or two foes and returning, taking as little as two minutes. The final task is fortunately more satisfactory, have a challenging boss battle against a somewhat altered existing enemy. There are a lot of jobs for Square Enix to go through, but the stories between levels fifty and sixty are a little dry.

With all that said, arguably the best new addition in Heavensward is flying mounts. Traversal has always been Final Fantasy XIV’s thorn as, while it wasn’t necessarily all that slow, it did take a fair amount of time to get from point A to point B. In most cases, it’s easier to spend hundreds of Gil to teleport as opposed to walking or riding there. That changes with Heavensward, or at least to a degree. Heavensward is built around new multi-layered spaces, so instead of being one large flat plane, areas have verticality to how they’re structured, forcing the player to find the appropriate route up and down. It can be a little confusing to traverse at first, especially places such as The Sea of Clouds, but it’s a nice change to the formula. Flying makes traversal all the more enjoyable, even though it does require a little bit of work to do so. This mainly comes down to finding and attuning Aether Currents through both exploration and quests. The only thing we wish was applied was the ability to fly in pre-existing locations. It’s understandable that the development team would have had to rework the entirety of A Realm Reborn’s areas to ensure the player doesn’t see cut off textures or places where they’re clearly not supposed to see, but having this limited to six new locations, even though they’re massive, is still a bit of a bummer. Regardless, Flying mounts are a step in the right direction, making traveling across the many lands Final Fantasy XIV has to offer all the more quicker. 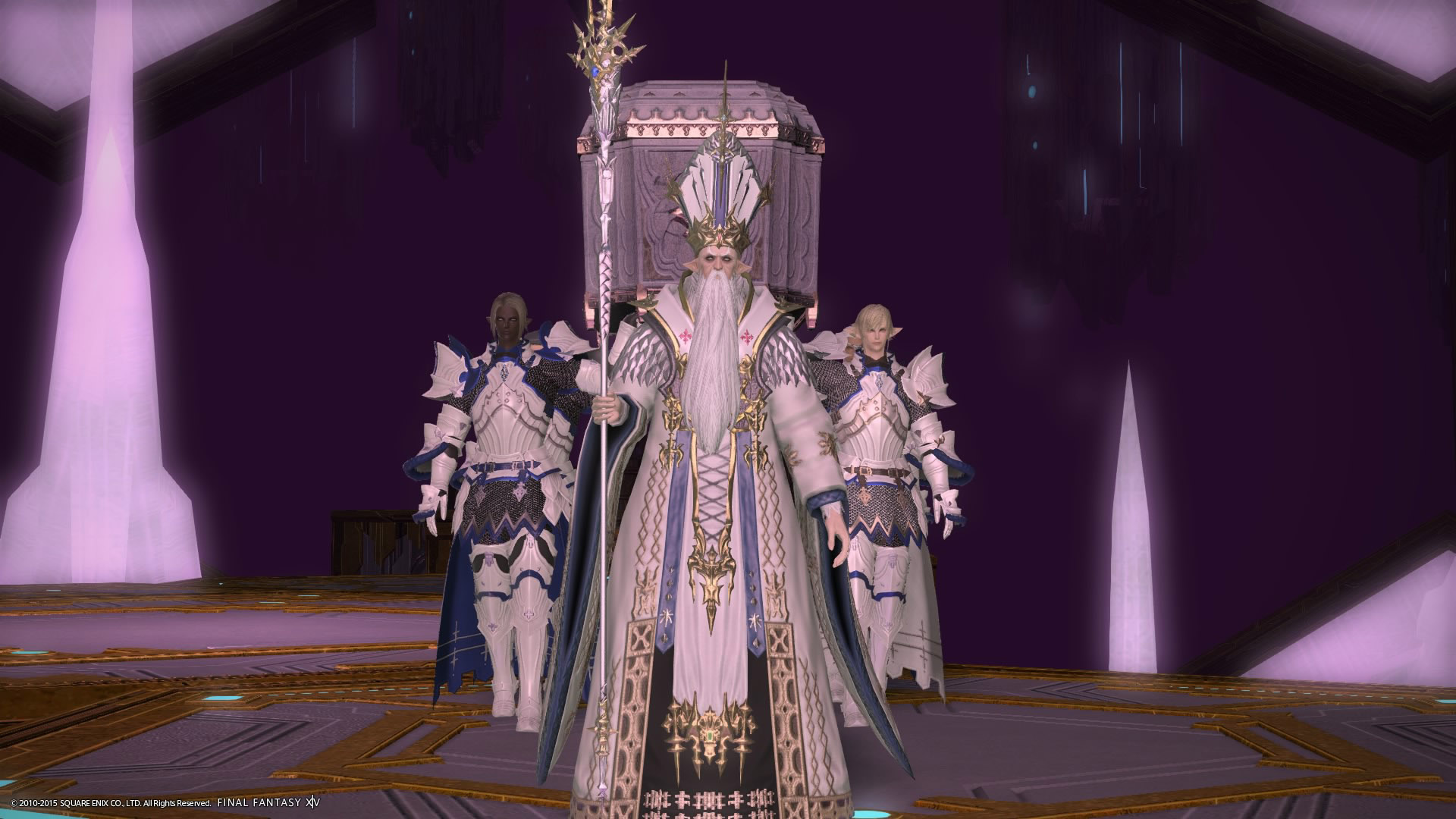 We couldn’t have asked for anything better than Final Fantasy XIV: Heavensward. It comes packed with a staggering amount of content that will leave players overwhelmed in both quantity and quality. It contains a storyline that’s highly entertaining and rivals most RPGs in length, three new jobs that are more than welcome additions and flying mounts that help revolutionize traversal in Eorzea. It helps that the level cap has been increased and the progression is well structured, both in story and the unnecessary need to grind for levels. With that said, Heavensward isn’t perfect as many of the side quests do fall into the routine of fetch quests and bounties, not to mention the somewhat lackluster job-specific missions. Fortunately, those are a small part of this massive package as it’s the end game dungeons and trials that will impress fans. Final Fantasy XIV: Heavensward ends up being an incredible value, offering more content than we’ve come to expect in this era.