We all know the amiibo craze is out of hand and finding many of the figures seems impossible. Amidst the whole Amazon Prime and Walmart deals rivalry, many felt the prices weren’t as low as they should have been. Don’t worry, Walmart’s got your back.

Currently, there’s a listing on Walmart’s website that actually exceeds the amount of bitterness and disdain felt by so many during the sales. If you want a Sonic amiibo, it generally retails for about $12.99 ,but not this one. Walmart wants you to buy it for a whopping $21.95 which is nearly double the going rate. It’s absolutely mind-blowing they could list it for more than twenty bucks. 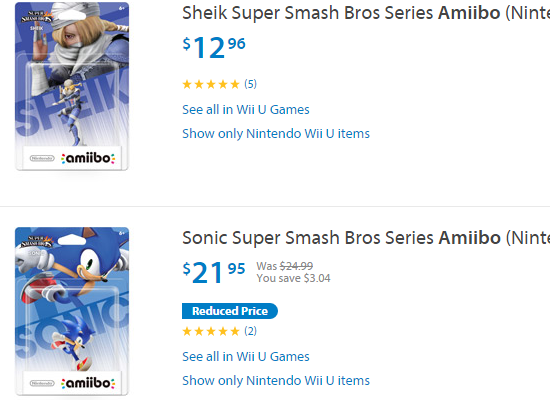 Sonic isn’t a very rare amiibo and certainly isn’t worth that price unless it’s got one of those rare manufacturer defects. But here’s the kicker, it actually says “reduced price,” what a joke. We can only hope there was an error in listing the price for Sonic. Perhaps the 1 and 2 were switched accidentally, although the fact that a MSRP of $24.99 is indeed odd.

It’s not right for a huge retail chain to jack up the price on amiibo, certainly not Sonic. If you want to shell out the rings for it, go ahead. We won’t stop you, but we’re not encouraging you. People don’t even buy Sonic games for twenty dollars anymore, why would they want the amiibo for that much. This isn’t the first time Walmart has made mistakes in selling their video games and probably won’t be the last.

Update: Since our posting of this glaring oversight, Walmart has corrected the pricing error. The Sonic amiibo is currently listed at $11.81.