It’s hard to believe in 2015, but the choices for twin-stick shooters a decade ago weren’t so much limited as nearly nonexistent. Smash TV, Total Carnage and Robotron were only playable by emulation, with the latter having had an attempt at reviving the name on PS1 and N64.  Llamatron had been made freeware and was playable through Atari ST emulators, and Geometry Wars was a hidden bonus in Project Gotham Racing. It was pretty dire, but then Mutant Storm showed up as one of the earliest Xbox Live Arcade games and started to turn it all around.

Xbox Live Arcade started out as a bit of a wasteland. There were a few Namco games you could buy cheaper on disc, a decent Arkanoid clone in Ricochet, Bejeweled, Hardwood Solitaire, and a few other odds and ends. XBLA was an idea in search of justification (not to mention an audience it wouldn’t find until the Xbox 360), and Mutant Storm turned out to be a great example of what console digital distribution could offer. It was an excellent game in the nearly-dead twin-stick genre, too small to be distributed on disc but too much fun to write off. Originally released on PC in 2002, it was on the Xbox that it found a more welcoming home in late 2004/early 2005, and did well enough that it earned a remake and sequel on Xbox 360.  Oddly enough, while the remake has a few nice tweaks to it, such as the powerups being labeled, the original version just looks nicer. 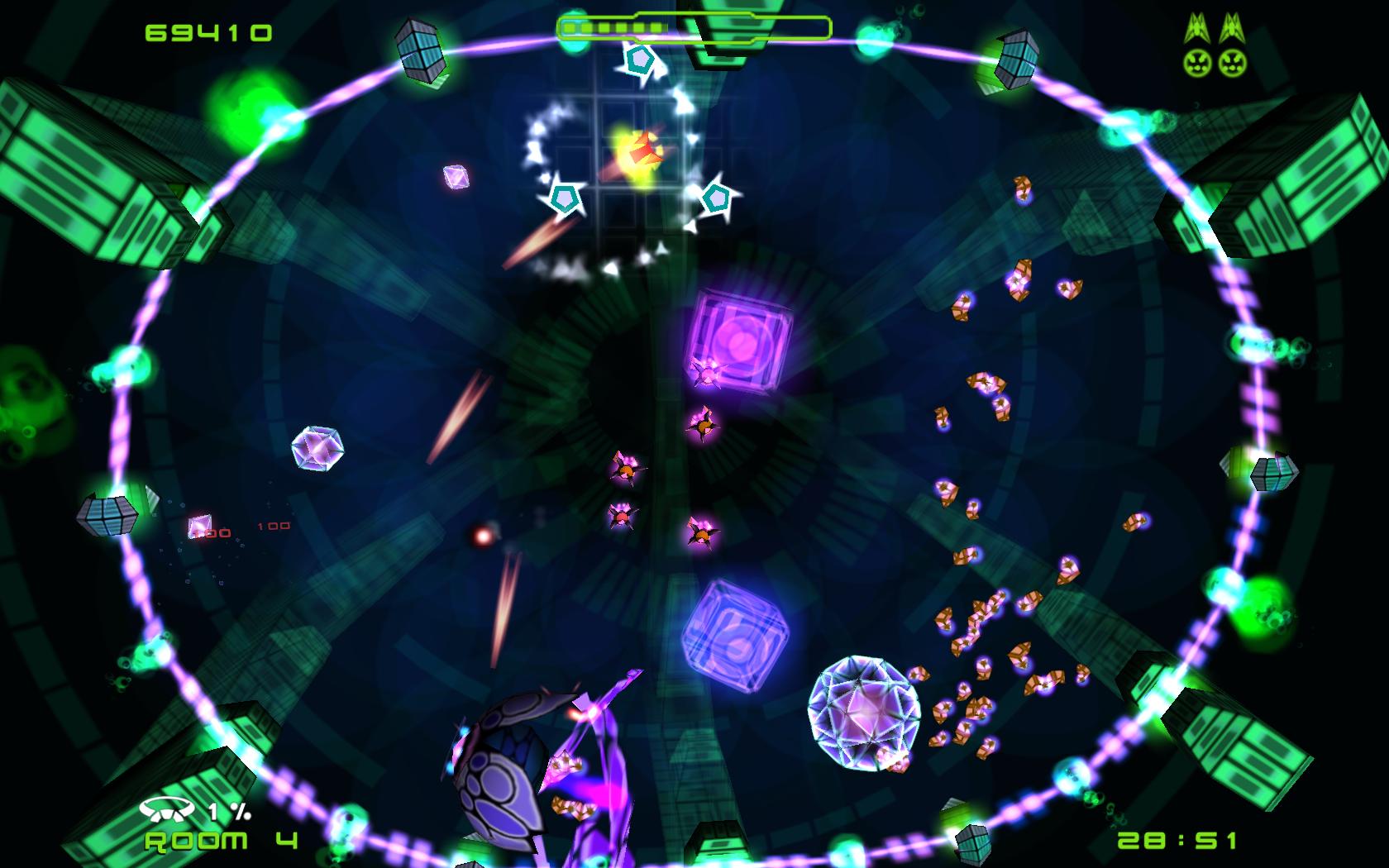 All screens are from the PC version demo.

Mutant Storm was a classic twin-stick shooter in the Robotron vein, except much kinder in the difficulty curve and with full analog shooting support. It’s probably worth putting a disclaimer in here at this point- Much of what’s coming merits a “Yeah, so?” in 2015. In 2002 when Mutant Storm came out on PC, not a lot of people would have had dual sticks without a USB adaptor for a PS1/PS2 controller, and 2003’s Geometry Wars was originally built to test the Xbox game pad. The game’s features may not have been revolutionary but they certainly foreshadowed many gameplay elements we take for granted today.

Each level is an arena with a unique layout, and enemies teleport in as predefined waves without much (if any) randomization. The bulk of the baddies are little bug-enemies, sometimes tossing a bullet or two your way but primarily there to provide cover for the bigger threats. They also come with a scoring mechanic to make life more difficult, as shooting a few enemies of the same type in a row gets a massive bonus on the last one shot. Say there’s a swarm of beetles ambling across the screen, not much of a threat to anyone. Leave them alone long enough and they’ll mutate one by one, changing into more powerful bugs that fire back at you. The score difference between the two forms isn’t enough to worry about in terms of waiting for them all to change, but one or two are bound to upgrade themselves before the herd is eliminated. Shoot the upgraded ones and the counter breaks, meaning that single bug that would have scored 1,000 instead gets 50. Carefully picking off the weaker guys before starting on the stronger ones, though, means you not only get a good number of bonuses for the popcorn enemies but also potentially another, bigger bonus for the upgraded bugs.  This chaining mechanic works on almost all enemies in the game. Large laser-turtles that take a good amount of damage to dispatch, turrets that auto-regenerate until you take out the central spawner, giant flower-jellyfish leaving behind trails of wiggling grubs, etc. The trick to scoring, of course, is learning to only shoot what you want, although the power-ups make this a more difficult prospect than you’d think. 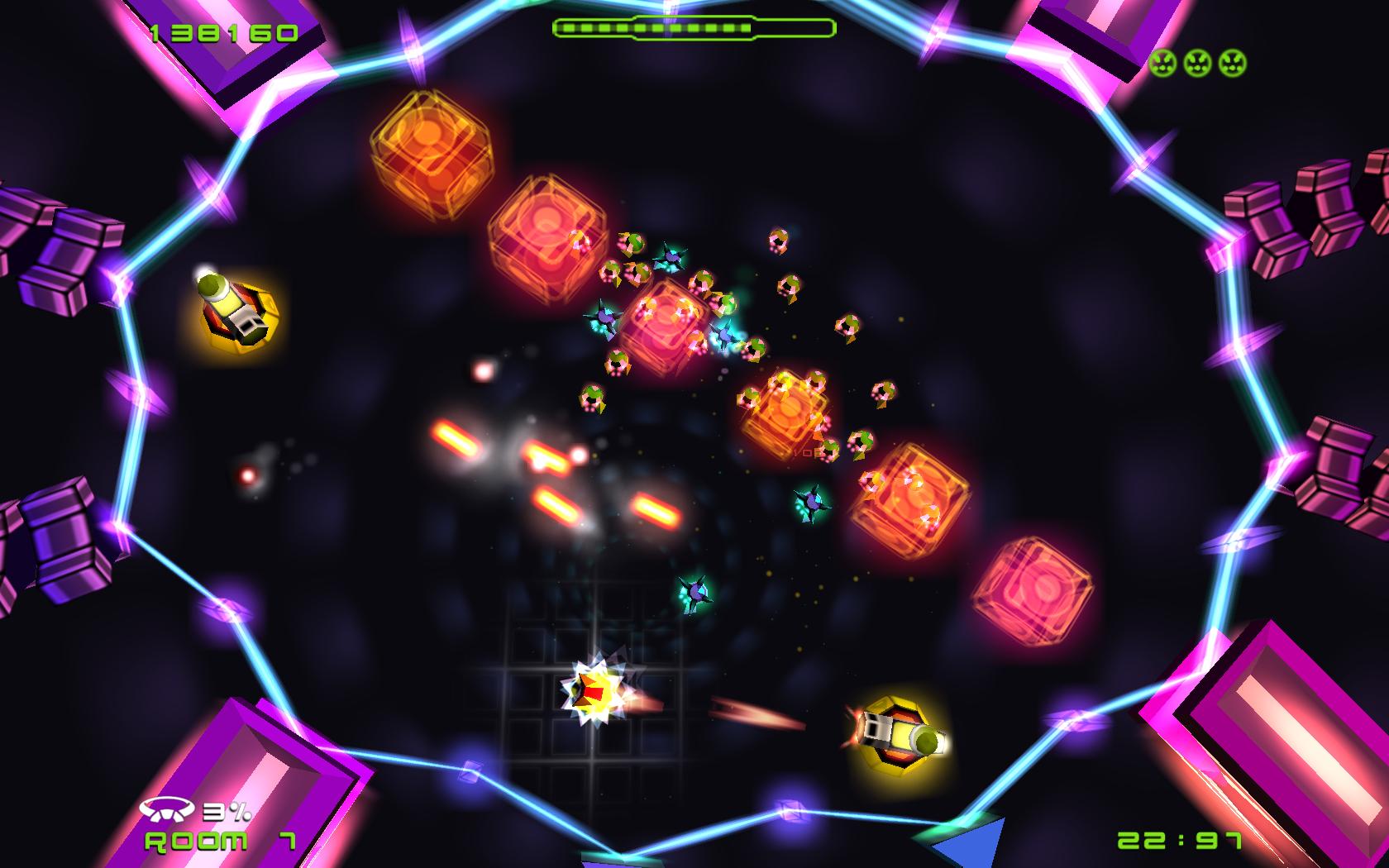 Power-ups are lovely things, but they have a tendency to be a little too good at killing enemies in bulk rather than precision.  Lasers that cut through everything and homing missiles are great for survival but terrible for precision, making for an interesting decision in a high-score run.  Score runs tend to be problematic, though, thanks to a bonus multiplier that resets when you lose a life, meaning the bulk of scoring tends to end up on the first few lives, with the later ones being more about squeezing in a few last levels rather than scoring.  There’s also a difficulty progression where you earn belts as you progress, but the percentage counter to the next one increases very slowly and each death knocks it down a little.  The belt penalty works better than the scoring one because, if you want to play with the big boys, its only fair that you need to prove your worth first.  Thankfully once you’ve earned a belt you can start a new game at that difficulty, and no amount of dying will take you lower than where you started.  The advantage of belts is that the score multiplier goes up much more quickly on the higher ones, assuming you can live long enough to take advantage of it.

By today’s standards, Mutant Storm is a very good if fairly plain arena twin-stick shooter.  By the standards of the first few months of XBLA on the original Xbox, it was a truly fantastic throwback to a genre that was long dead and buried.  Each level was its own unique challenge, defined as much by arena shape as enemy mix, and progression was always a matter of skill earned through practice.  The difficulty progression with belts meant that, no matter how good you got, the game was always willing to get harder to accommodate your skill, with a nice increase in scoring to go with it.  It was easily the best of the original Xbox’s XBLA offerings, although to be fair it was less than a year before the 360 came out and Geometry Wars Retro Evolved fully resurrected the twin-stick genre.  Both the original 2002 PC release and the 2004 XBLA version were a little ahead of their time, but there’s no denying it helped pioneer the return of one of the most popular arcade genres available today. 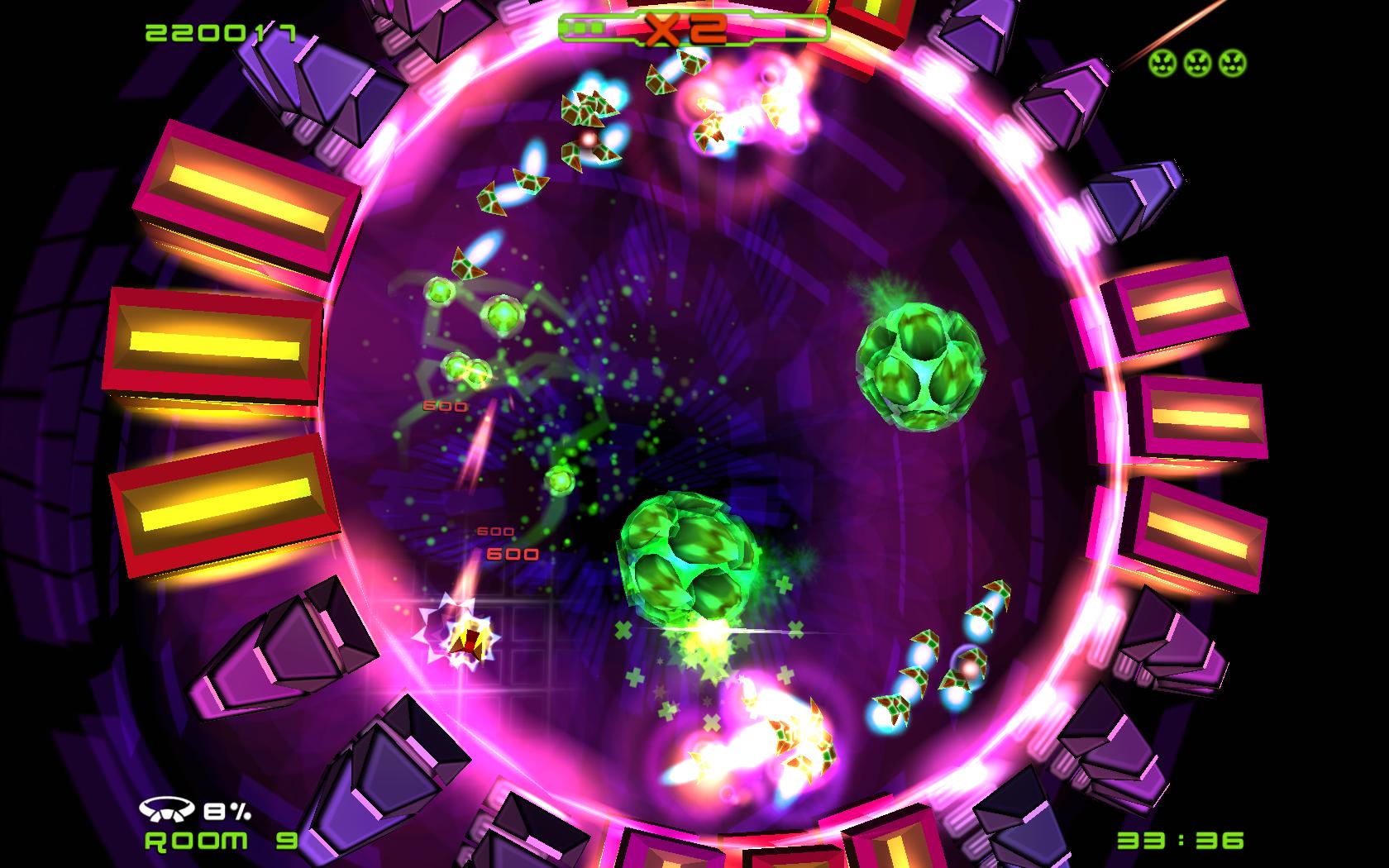 One of Pom Pom Game’s two developers was Michael Michael, who went on to be the lead developer of Wildfire Worlds.  The cute papercraft riot simulator was a complete change of pace from Pom Pom’s more arcade-style output, and while I really enjoyed writing about the preview build I got to play back in 2013, it’s unfortunately been canceled due to Michael’s untimely death in September of 2013.  Michael’s gaming career was quietly epic and wonderfully subversive, and it’s especially sad that he and his team’s final work will never be completed.  Mutant Storm was a preview of a major style of the future of indie gaming, and Wildfire Worlds was every bit as much ahead of its time.