Corsair is one of the leading hardware manufactures in the PC hardware scene, not only for gamers, but performance. They bring some of the world’s most successful SSDs, power supplies, memory, fan/water cooling and so much more. Looking at the exterior of your PC, the American-based company also creates high quality gaming peripherals, including keyboards, mice and headsets. Their K70 lineup of keyboards have been incredibly successful do to its accessibility and fancy lighting systems, but they’re not done there. While they’re not innovating with their latest release, Corsair has put together a keyboard designed to be in the middle of the road, giving players the same high quality they’ve come to expect at a reduced price.

The Corsair STRAFE is Corsair’s attempt to offer a more affordable keyboard while maintaining its elegant design and a great deal of features. In terms of what to expect when you open up the package, purchasers will receive the sleek black keyboard, an integrated, thick USB cable (which is actually two in one), a bag full of interchangeable keycaps with a removal tool and your standard manual. Unfortunately, the thick USB cable isn’t braided as we’ve come to expect from a number of Corsair keyboards, but it serves its purpose. They keyboard itself has two feet at the back that can be raised for slightly angled use, along with Corsair’s more polished logo compared to their previous gaming design. The STRAFE also comes in three flavors for their keys: Cherry MX Red, Brown and Blue, adding the differences in customization. 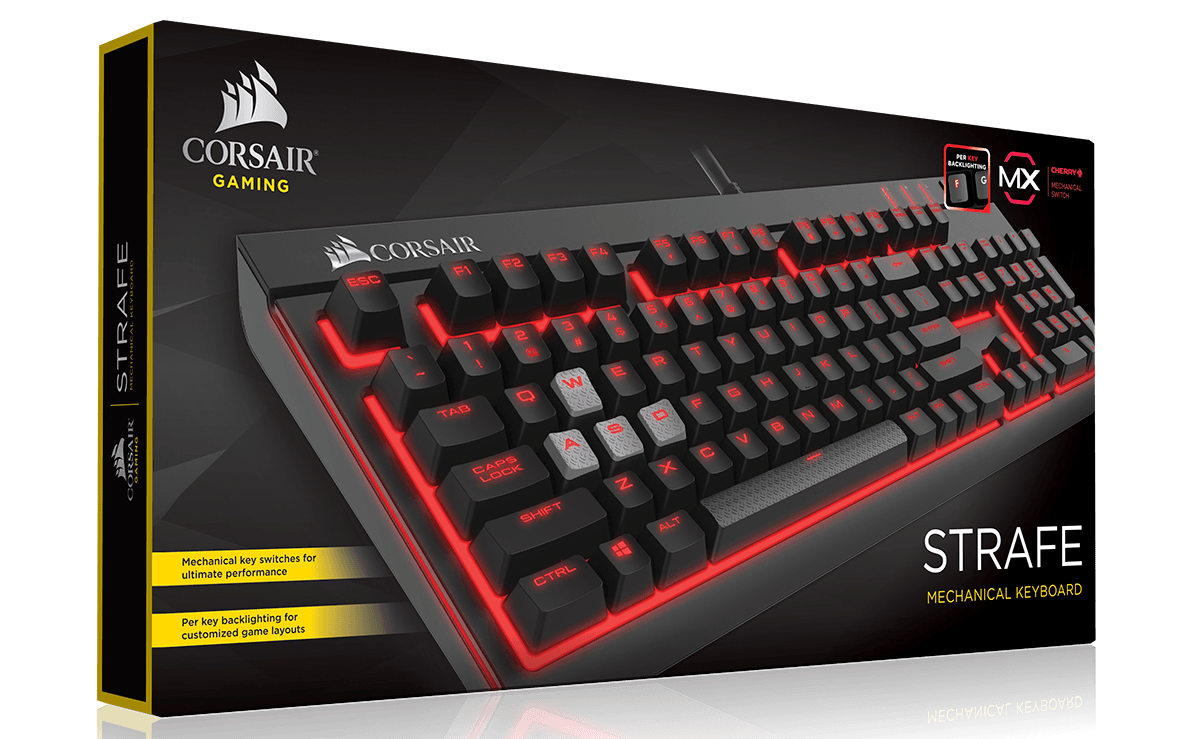 The STRAFE has your standard black keyboards keys with transparent lettering and numbering, but it also comes supplied with a number of grey contoured, rough textured keycaps. Not all keys can be replaced, though, as they’re specifically designed for two game genres. It’s mainly meant for the MOBA and first-person shooter crowd as one set comes with QWERDF while the other is WASD. These contain the same texture as the space bar which is standard and non-replaceable and it feels great. The slight angling inwards towards each other is also a really nice touch, and is especially perfect for precision in games. The keyboard also comes with an anti-ghosting gaming grade circuitry that includes 104-key rollover to ensure for the best accuracy possible. Finally, the keys have a said limit of 50 million presses before they begin to degrade, an easily cleanable layout, and numbers that are more prominent than ever before, being on top of their alternates instead of below.

Unfortunately, the STRAFE would have benefited from a wrist rest, especially if this is targeted towards gamers, as it doesn’t support one entirely. Those with a dedicated rests will have no problem, but it definitely could have helped improve the overall comfort for those with long game sessions. The overall design of the Corsair STRAFE looks and feels more or less the same as we’ve come to expect, but it doesn’t use an aluminum chassis. Instead, Corsair has elected to go with a hard plastic feel. As much as that may turn some off, it feels like a sturdy design; just don’t slam your fist into it during a rage quit as it probably can only take so much. Performance-wise, Corsair STRAFE is fantastic. It has never felt so comfortable to type on a keyboard, as the keys have a soft but sturdy touch to them. Whether or not purchasers use this for gaming, STRAFE feels ever so comfortable to use. 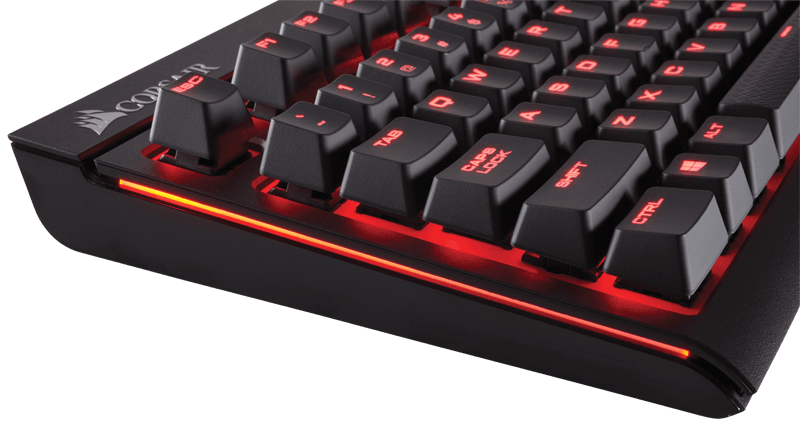 Software-wise, STRAFE uses the standard Corsair Utility Engine. This is a fairly simplistic program that allows users to fully customize their keyboard, be it STRAFE or K70, to an absurd degree. This includes reassigning specific keys and macros, adjusting support for other application, and most importantly, programming the different lighting modes. While the STRAFE doesn’t include the full RGB color set, which is understandable as it only comes with the more costly models, users are able to go in and set different ways the lighting effects their keyboard. There are preset lighting effects (visor, rain, pulse, wave, and type lighting key/ripple), but those who have creativity in their blood can design their own effects and upload it online for others to try out. In the early stages there aren’t any to be found, but just like the K70 profiles, it should take off soon. There’s a lots everyone can do as the Corsair’s Utility Engine and STRAFE work together perfectly.

Being twenty dollars less than Corsair’s elite K70 single colored gaming keyboard model, there are some features that are missing. For one, the STRAFE keyboard somewhat lacks in terms of media functionality. Multimedia capabilities have been limited and assigned to keys between F5 and F12 (with F6 being the only one left out), all of which can be accessed by holding down the FN key. It works as promised, but considering that the FN key is located on the right side of the keyboard, and it’s very slim design in comparison to its Alt and Ctrl brothers, it can be a pain to reach, requiring unnecessary hand alterations or stretching. You can use one hand but it’s something that feels a bit clunky and you have to get used to over time. It would have been preferred to have dedicated media buttons and knobs, especially with a giant blank spot now located above the number pad where the commands used to be located, but considering the somewhat lower price point in comparison, it’s not all that surprising to see these consolidated. 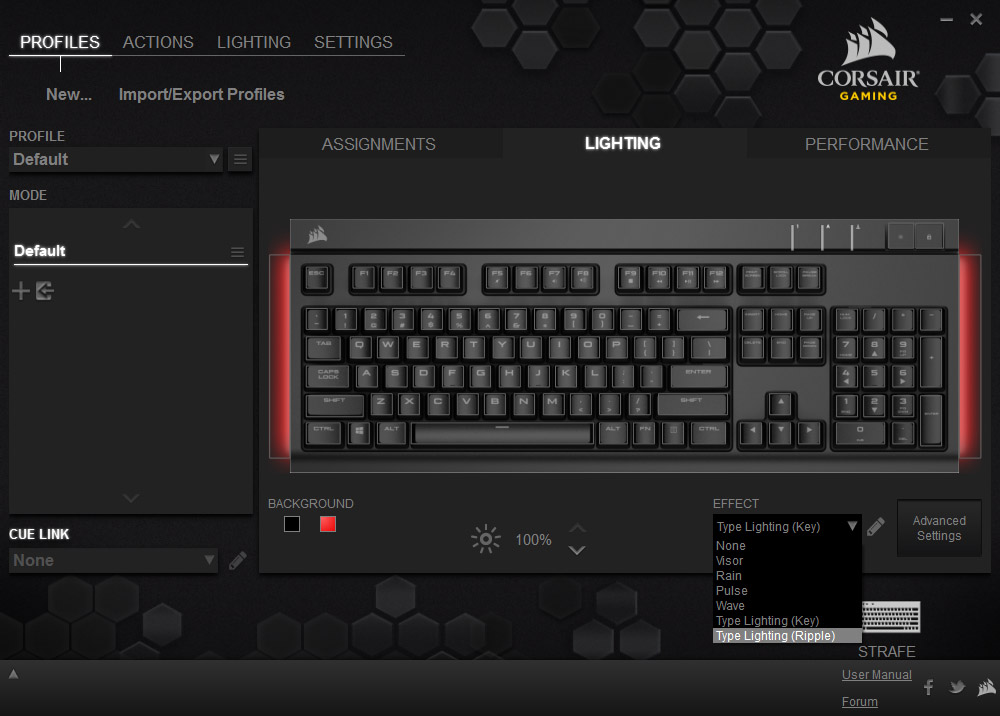 If you’re looking for a low-cost mechanical keyboard for gaming, the Corsair STRAFE has your number. It comes with Corsair’s patented soft-touched Cherry MX Key Switches, which are quite possibly the best I’ve used to type with, to a highly customizable lighting system. That’s not mentioning the fully programmable commands, FPS and MOBA-inspired textured keycaps and USB pass-through. With that said, due to its somewhat reduced price, Corsair had to make some cutbacks. For one, while the plastic frame is solid and fully capable, the aluminum chassis is the highly preferred model. In addition, dedicated media functionality has removed, with it being reassigned to function commands, and no wrist rest support will take its toll after hours of gaming. Regardless, Corsair STRAFE is a solid and affordable piece of hardware that will give those with tight budgets more for their dollar.