Another day, another randomly generated dungeon swarming with monsters, stocked with huge variety of powerups, and beaten into submission twin-stick style using one of a number of different hero types. On the one hand, it’s a genre rapidly filling up with quality gaming.  On the other, how is too much quality gaming a problem?  Dungeon Souls is the latest action dungeon-crawler to land on Early Access, and while hardly a unique snowflake of game design, is already a load of monster-bashing fun.

There’s no plot to speak of in Dungeon Souls, and no reason to go adventuring other than that the dungeon is filled with monsters and ability-enhancing items. As it turns out that’s all the justification needed to blast through rooms packed with slimes, skeletons, snowmen, and other weird abominations of supernatural nature as they burst with gold coins and the occasional treasure chest. Four character classes are open at the start (it was three up until a couple of days ago, but the new Nightblade character bumped the count up) with another four to unlock. Barbarian is strong and melee-focused, Archer is precise and faster than the Barbarian, Thief is super-zippy, etc. I’m personally fond of the Cleric and his piercing bouncy-shots, especially when filtered through his special shot-dividing power wall. 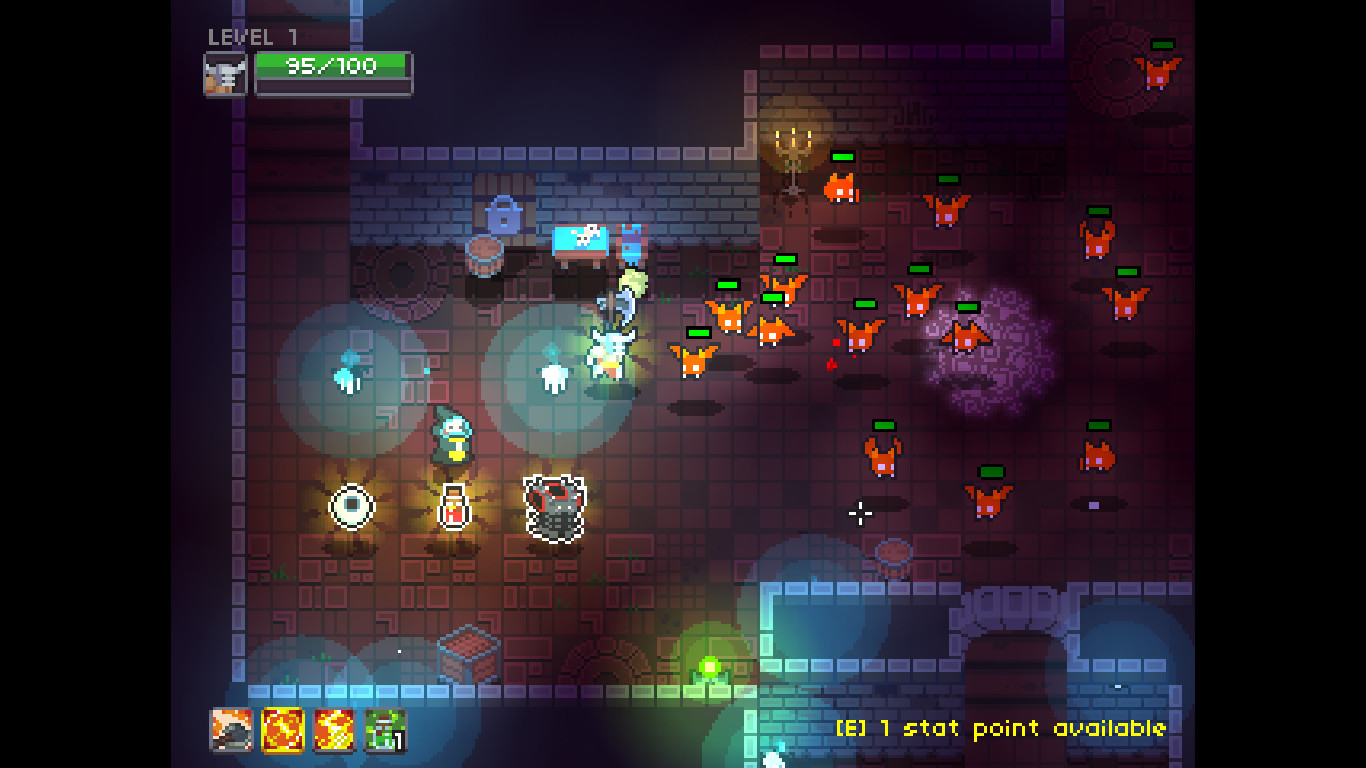 Each character starts with a base attack, a single health potion, and two locked abilities. The Thief, for example, can shoot a bomb that explodes on contact, damaging everything in its explosive radius, and can also turn invisible and untouchable. Each of the four abilities (health potion counts as one) has its own cooldown period, but other than that can be used as often as you’d like. Every few levels, awarded at a rate that theoretically has an internal logic to it, you get a point that can power up an ability further. The regular attack gets more powerful, health potions heal better, and special abilities become extra-special. Every level also awards a point you can apply to one of the four base stats of strength, speed, defense, and accuracy, and that’s as deep as the leveling system gets. Dungeon Souls is more about annihilating monsters by the truckload than fiddling with stats, though, so that works out fine.

The monster-killing is done twin-stick style, except gamepad support is still pending at the moment so mouse/keyboard will have to do. The dungeon’s creatures range in size and deadliness from little popcorn birds and skeletons to bigger, tougher minotaurs, slime goons, yeti, and other assorted beasts. They can also come in two varieties, regular and enraged, with the latter being both tougher and guaranteed to drop a treasure chest. There’s no promise anything will be inside, but they come in large enough numbers that useful items come along at a nice pace. 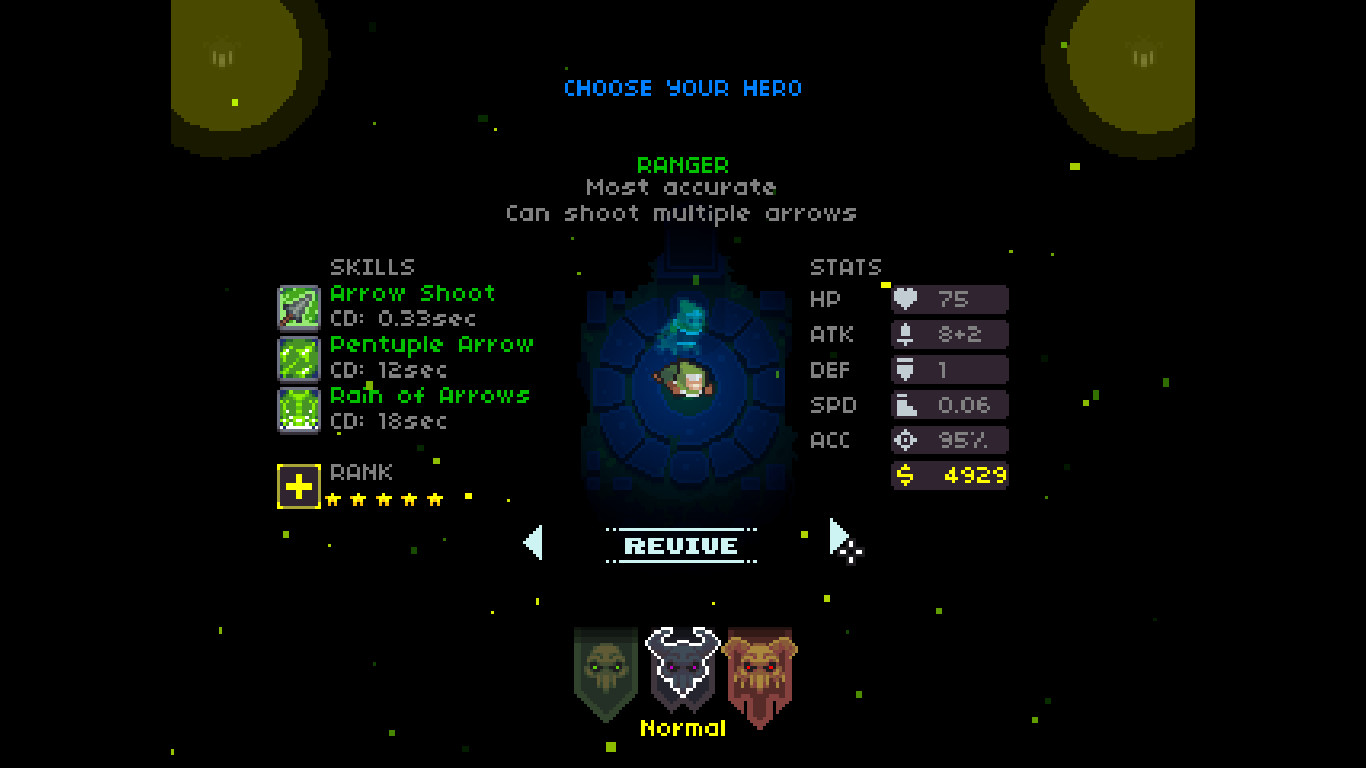 In addition to health potions (green get added to your inventory, red have a 50% chance of giving in instant health boost or nothing at all) and a couple of other temporary stat-enhancers, chests may contain an artifact giving a permanent buff or ability. Moving or attacking a little faster is always nice, but for real fun you can’t beat a percentage chance of launching a rocket, or setting an enemy on fire, or detonating an enemy body when defeated. The variety of abilities are a lot of fun to play with, and the odds of getting at least one of the more interesting drops per dungeon level are good.  It shouldn’t take long before your character has an orbiting helper or two, a 50% chance to slow enemies on hit, a couple of permanent stat buffs, a gold magnet, and a health bonus for every five enemies killed.  Or possibly a completely different but just as helpful set of abilities, depending on what turns up.

While the basics of Dungeon Souls make for some fun and highly replayable dungeon crawling, at this stage of development a significant number of features are in flux and subject to change without notice.  Stat enhancers, for example, recently changed from giving a straight point bonus to giving percentages, leading to much unhappiness in the Steam forums while people make the adjustment.  Certain unlocks are broken, such as the character class that requires Merlin’s Hat.  You have to earn that one in Easy difficulty to make it work, instead of all difficulties, and while the odds of getting a nice selection of drops is good, getting a specific one is very low.  The big missing element, as previously mentioned, is proper twin-stick support, which is the one I’m most anticipating.  Broken, bugged, or changing elements are one thing, but the basic game framework is strong enough to hold up the elements still under construction.  Arguing with the controls, on the other hand, is always going to be a hindrance. 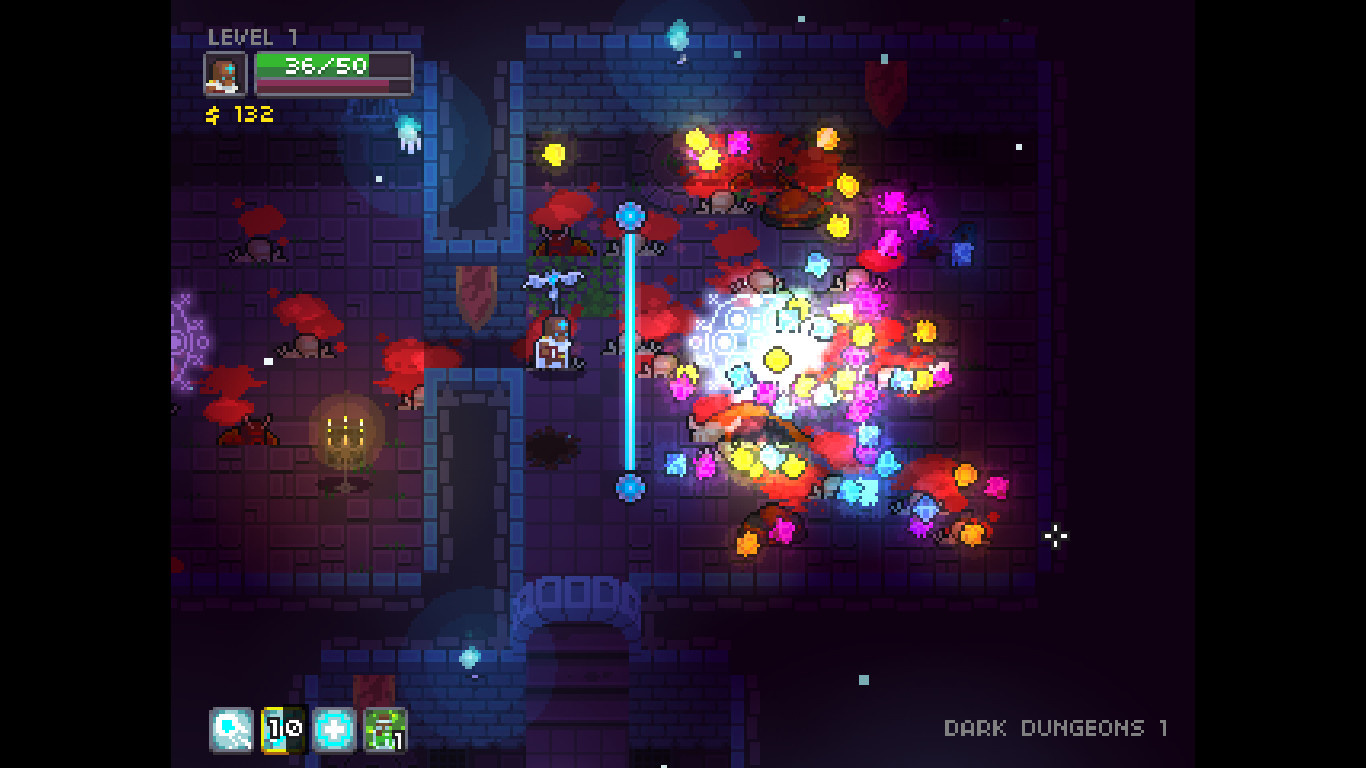 While there’s a lot of work left to do to bring Dungeon Souls up to speed, the bits that work are great fun.  Running through the dungeon shooting or beating on hordes of monsters, finding or buying new artifacts for better abilities and opening up the gate to the next level while playing for time on the current one to wring every possible advantage from it is a system that works.  The gold banks for buying permanent stat boosts and individual classes rank up the more they’re used, but the real draw of Dungeon Souls is to see how far you can get and how many powerups you can earn before an inevitable death ends your run.  It’s an irresistible gameplay loop when done well, and Dungeon Souls quickly sinks its hooks in and doesn’t let go.  Originality in game design may be a wonderful thing, but sometimes it’s just as nice to get a familiar idea done well.