Last year, Freedom Planet surprised the gaming world by being the most unique and imaginative successor of Sonic the Hedgehog you could possibly fathom. Freedom Planet developer, GalaxyTrail, started out as a team of Sonic fans that wanted to create a Sonic game, but somewhere down the road they decided to create something new and only good things came of that decision. LakeFeperb, another developer with a strong passion for all things Sonic, initially worked on some well-made and designed Sonic fan games that are seriously worth checking out, in particular the RPG-esque platformer that is Sonic Chrono Adventure. Of course, these were all non-commercial passion projects that can be enjoyed for free, but when someone has a knack of creating a solid Sonic game, it only makes sense to branch off and create an original IP of their own. Spark the Electric Jester is the first commercial title by developer LakeFeperb, taking all the tools and skills gained from making idealistic Sonic games and using them to create something fresh and original. Indeed, why make another Sonic game when you can create something special with sparkling new ideas?

Spark the Electric Jester takes inspiration from a number of influential games, and these become immediately apparent the moment you start playing. Mega Man X4, Knuckles Chaotix, Ristar, Sonic CD, Sonic the Hedgehog 3, and Dynamite Headdy… these are the influences that fuel the creative and design direction of Spark the Electric Jester, as it adopts mechanical, design, and even artistic elements from these aforementioned titles and implements them in intuitive ways, all while moving ahead with plenty of ideas of its own. Developer LakeFeperb has launched a Kickstarter campaign to help Spark the Electric Jester reach completion, and in the meantime there is a pretty stellar demo showcasing a substantial amount of content, allowing you dive into three complete levels with some cool boss battles and power-ups to boot. 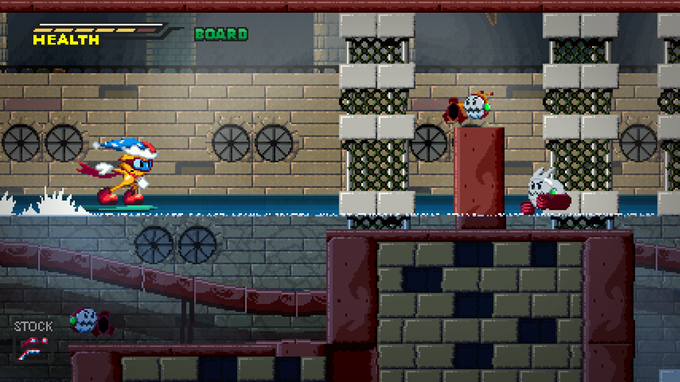 Spark has a character design that’s pretty similar to that of Ristar, and the visuals and art style of the game echo the vibe of both Ristar and Dynamite Headdy. Needless to say it all looks pretty stylistic and cool, with plenty of color and a cool looking protagonist that gives off the tude of platforming mascots from the SEGA Genesis era. Mechanically Spark is an interesting fusion of ideas, his momentum and inertia is most certainly like Sonic, and there is even an assigned boost/dash button to allow Spark to pick up momentum on the fly. Spark can also slide and hop off walls much like Mighty the Armadillo, an obscure and oft forgotten character from the Sonic universe who made his first and only appearance in Knuckles Chaotix.  His core combat prowess takes a page out of Mega Man, in particular Mega Man X4, as Spark can dish out a three hit combo that resembles Zero’s own 3 hit light saber attack, and with a fully charged meter Spark can unleash a powerful projectile much like Mega Man X’s own charged Buster Shot. At his core Spark is a mix of really cool ideas, but along the way he can equip himself with some really interesting power-ups, weapons, and even gadgets. Remember that brief snowboarding segment in Sonic the Hedgehog 3? There is a power-up in this game that allows you to use a surfboard of sorts at any time during the level. There’s other cool elemental power-ups too, granting Spark some new elemental abilities. All in all, there is plenty of spice and flavor when it comes to gameplay variety, with the level design complementing these mechanical hooks quite soundly.

The level design of Spark the Electric Jester pretty much screams Sonic CD, as the levels are huge and layered with multiple branching paths that doesn’t follow a linear progression, but rather has players exploring in all directions in order to make their way. It doesn’t feel confusing, but rather each path provides a viable route to the finish line much like in Sonic CD. Levels are punctuated with bosses that are simple yet interesting in their pattern, and are quite satisfying to defeat. From platforming, to moments of high speed, and plenty of combat, Spark the Electric Jester offers a nice mix of gameplay and design styles, with no particular aspect outstaying its welcome, but instead mixes up its ideas to keep things fresh and engaging at every moment. 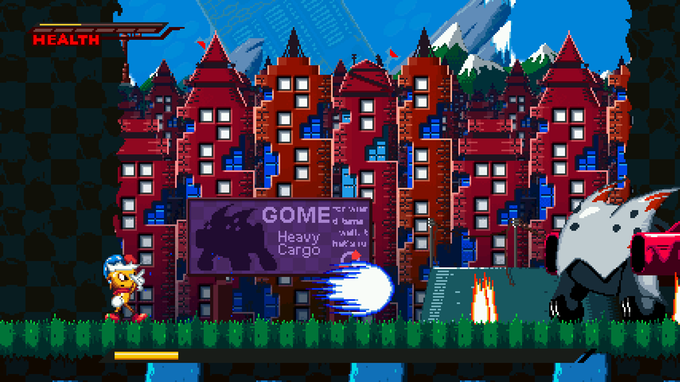 The music in Spark the Electric Jester is awesome. When you think about Sonic games, nearly all of them have a memorable Stage 1 BGM that kick starts the game with a bang and does a fine job of hooking you in for the ride. The Stage 1 BGM of Spark is among the coolest and catchiest you’ll ever hear, an instant stuck in your head but totally not in an insanity inducing way kind of BGM that instantly makes you fall in love with the game. The rest of the soundtrack is similar to the style of the music found in Sonic games on the Genesis; it’s uplifting, energetic and a quintessential ingredient that makes Spark the Electric Jester such a blast to play.

Spark the Electric Jester currently has a month long Kickstarter campaign with a goal of just $7000,and so far it’s doing well. You can head on over to the Kickstarter page for more information, updates and to download the generous free demo for yourself.