There aren’t many things cooler than piloting a sleek ship or powerful mech in the depths of space. Many anime, video games, and movies have told tales of exciting adventures in that dark, beckoning expanse, but few experiences can compare to 17-Bit’s Galak-Z. It casts players as the rookie pilot A-Tak, pilot of the Galak-Z, mankind’s last hope against the impending invasion of the alien Imperials, in a five-season epic that pays homage to the classics of the genre while blazing its own trail for others to follow. It’s an immersive, challenging and perpetually enthralling experience, and easily one of the best games on PS4.

The Galak-Z is a powerful ship with enormous potential, but it’s still only a small, solitary vessel against fleets of Imperials, space pirates and giant bugs only too happy to end your life early. The ship’s shields are rechargeable, but pop after two hits, and once they’re down there are only four hits between you and the endless silence of space. Luckily, you’ve got a few tricks of your own: lasers, missiles and even a Mech Mode complete with beam sword. The tools are all there, but it will still take some doing to triumph over the three separate sects of enemies gunning for you.

Each enemy faction features unique crafts with distinct attributes and weaponry, and discovering and exploiting their weaknesses is the first step towards success. But you really are desperately outnumbered at nearly all times, and in order to guarantee a long and legendary career you’ll have to use the environments, as well as your enemies’ aggression, to your advantage. Enemies in Galak-Z aren’t like those in other 2D shooters, however. They’re truly intelligent, adapting to the player’s movements and environmental changes without hesitation to remain constantly threatening. They’re aggressive and thirsty for blood, but you can also use that against them. 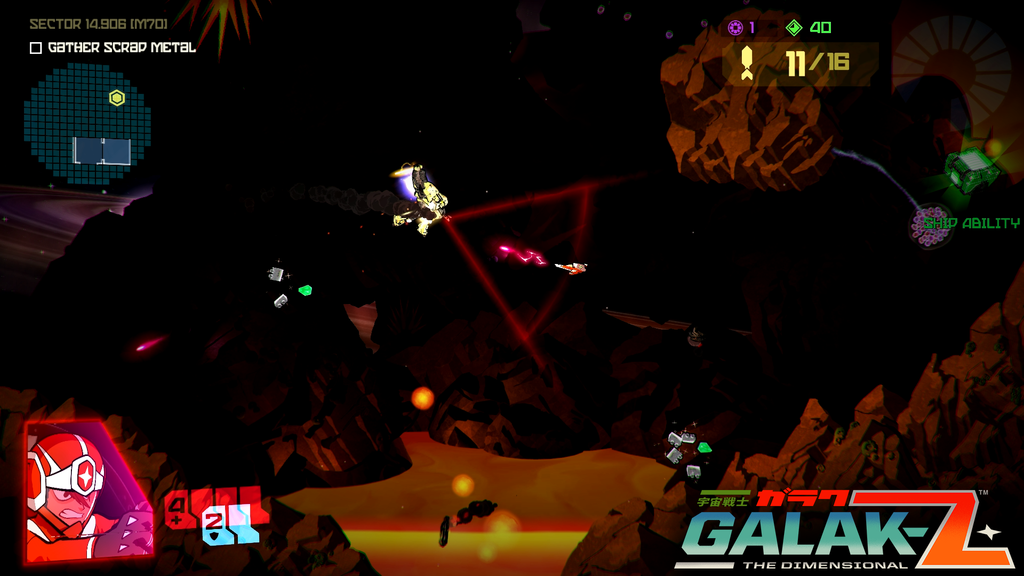 While they may share a common enemy in A-Tak, enemy pilots will quickly forget all about him and his rad ride once they catch a glimpse of each other, and you have the privilege of playing matchmaker. Luring one faction into the path of another can give players an opening to slip by unnoticed while they blast each other to pieces, or wait until they’ve softened each other up before jumping in and smiting the lot of them. Galak-Z is full of tactical options and alternate strategies, giving players the power to decide how they want to approach each encounter.

The cavernous asteroids and decrepit shipwrecks of Galak-Z are loaded with environmental hazards. Explosives, shield-popping spores and bubbling lava are only a handful of the dangers around every corner, and while players will do well to avoid them, they’ll do even better to use them against their enemies. A well-measured laser blast can buy you just enough time to reboot your shields or boost away to safety, and skilled pilots will always be on the lookout for parts of the environment they can use to give them an edge.

There’s a serious element of stealth to Galak-Z, and players who choose to ignore its importance will be briskly met with a premature demise. It’s in each pilot’s best interest to move along unnoticed, but even the smallest ignition of your thrusters can alert enemies in the vicinity to your presence. A translucent blue ring extends from your ship whenever your propel yourself, providing an invaluable visual representation of the circumference of your sound. Players will quickly learn to use their thrusters sparingly, instead relying on Galak-Z’s realistic physics to maintain their momentum while they float along silently. 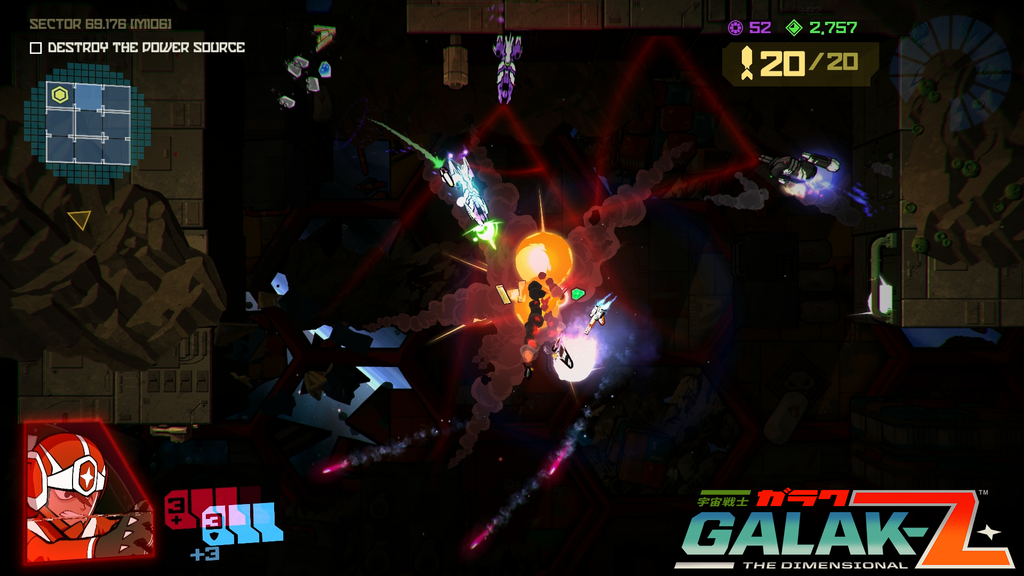 Of course, tactics won’t do any good if you can’t fly your ship properly. The Galak-Z is small and acutely maneuverable, taking full advantage of 17-Bit’s superb physics engine to give players complete control of the craft with a variety of thrusters. It takes some practice, as all good things do, but by putting all the power in the player’s hands 17-Bit instills the belief that nothing is impossible as long as you’re piloting the Galak-Z. Whether you’re reverse-boosting away from a pack of enemies while leaving a wake of plasma blasts, or breaking an enemy’s shields with your lasers before shifting into Mech Mode to slice him in two, the flexibility and possibilities afforded by the Galak-Z really make you feel like an intergalactic pilot, capable of unbelievable stunts and ingenious improvisation.

However, because each mission’s level structure is procedurally generated, players can’t rely on their knowledge of the winding caverns or angular halls of any given area to guide them to victory. They need to be able to improvise and adapt, like a real ace-pilot, as they explore the nooks and crannies of each beautiful, eerie environment. It’s a genius move from 17-Bit, and preserves the wonderful experience of exploring deep space that Galak-Z delivers so profoundly right from the beginning. Players can also experiment with different weapon customizations, which can be acquired both during and after episodes by trading in the salvage collected after destroying enemy crafts.

It’s a good thing the levels are different each time around, too, because Galak-Z can be crushingly difficult. Every enemy has the power to kill players if they give them the chance, and failing mid-season means you’ll have to start again from Episode 1. Because the missions and layouts are different each time you play, however, it never feels like a chore to replay long stretches, and if anything they serve to illustrate the lessons you’ve learned from your earlier mistakes. The only way to bypass this mid-season restart is by cashing in the Crash Coins you accumulate throughout each mission, though you’ll need at least five to make it worth your while. You’ll be stripped of your upgrades and sent back into the same episode you just played, but you can find them all again in a special salvage container hidden somewhere in the level. 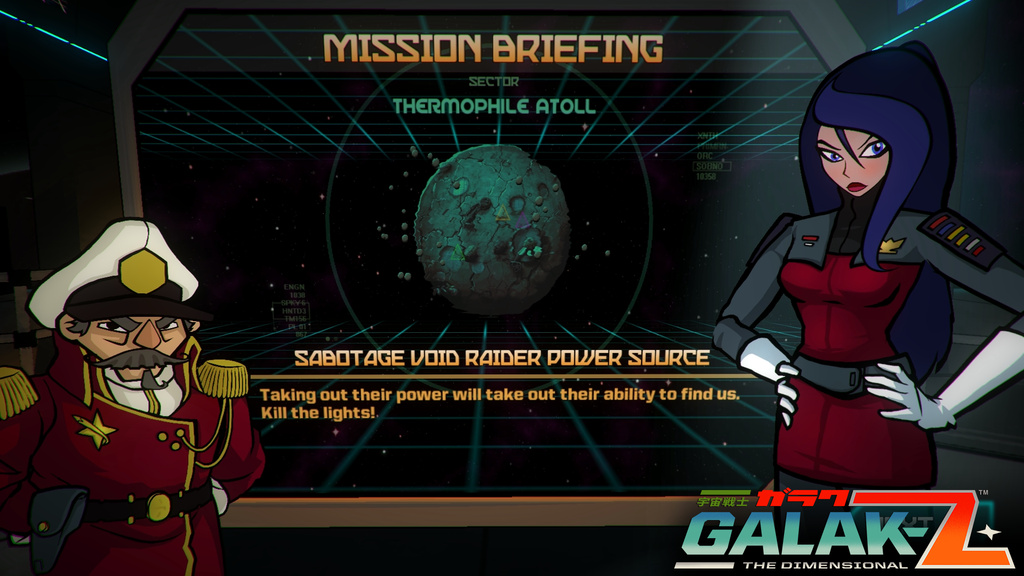 Galak-Z isn’t designed to be an easy ride, but because the odds are constantly stacked against you the elation of victory is that much more pronounced. Each battle is a dance between life and death, but much like punishing games like Bloodborne it’s thrilling to feel yourself improving as a pilot as the seasons wear on. Enemy encounters that initially seem impossible become routine exercises with enough time in the cockpit, and the tricks and combinations you tried and failed to execute earlier in your career become instinctual sequences that yield magnificent results.

17-Bit’s latest creation captures the solitude and tension of space, but also flaunts the infectious feeling of exploring the unknown that makes space so alluring. It’s chillingly atmospheric, mixing the ambient sounds of thrusters and laser blasts with a soundtrack of booming bass and space synths, but the real highlights are the dogfights. The unpredictability and intelligence of the enemies, along with the procedural generation of the levels, makes each encounter feel distinct, and by introducing new enemy types and blaster upgrades Galak-Z grows increasingly more exciting as you progress.

17-Bit seriously committed itself to Galak-Z’s ’80s anime aesthetic, and the results are brilliantly nostalgic. The influence of shows like Macross and Robotech are immediately evident in the character designs and premise, but it’s the little touches, like a fuzzy VCR pause screen or a throwback credits sequence, that really bring together the presentation. Even with such illustrious inspirations, however, 17-Bit didn’t forget to instill its own personality into its creation. Galak-Z‘s hand-drawn art style blends the visuals of classic anime with those of American cartoons, a perfect representation of 17-bit’s multicultural roots. A-Tak is also a cocky, yet capable hero, and his banter with Commander Beam is always a highlight. The amount of love and effort that went into crafting Galak-Z is plainly evident, and while it still stutters every now and then during particularly hectic dogfights, 17-Bit has produced nothing short of a masterpiece. 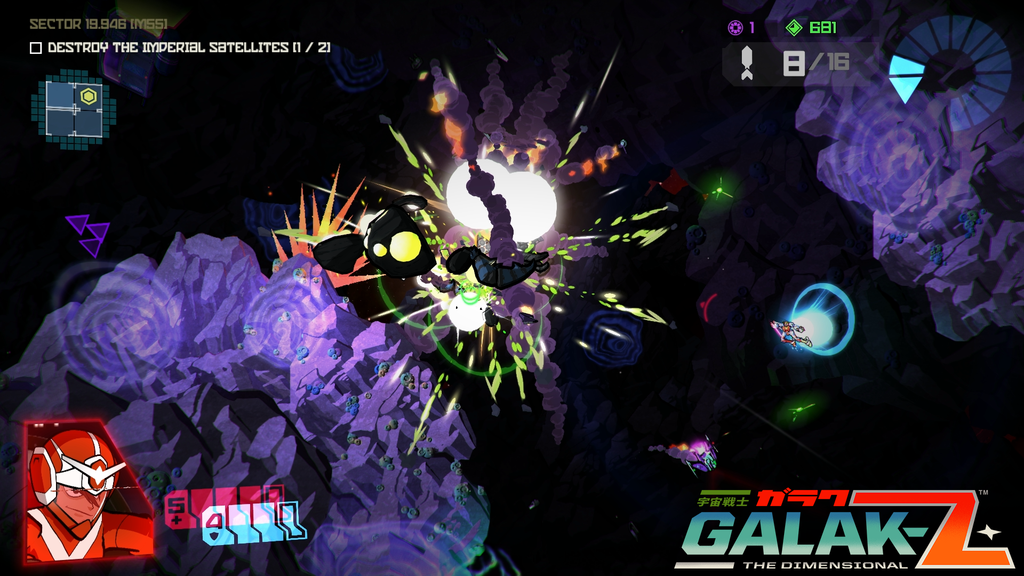 Galak-Z is the very definition of awesome. Playing it makes me feel like the badass intergalactic pilot I always dreamed of being as a kid, and I love it even more because it makes me work for that ecstasy. No battle is scripted, nothing is choreographed – my skills do all the talking. 17-Bit’s physics-based space roguelike is a truly special experience on PS4, one that has the potential to become the flagship indie title on a platform bursting with incredible creations. It rewards patience, skill and creativity, and absolutely deserves your time regardless of your relationship with ’80s anime or 2D shooters.