Otome visual novels are having one heck of a year. For the uninitiated an “otome” game typically refers to a dating sim/visual novel where the protagonist is a female who romances her choice of multiple male suitors. Although visual novels themselves have only seen increasing acceptance in North America these last few years, otome titles have had an even tougher time breaking through. This year, however, it seems that publishers are willing to release far more than just another version of Hakuoki. Amnesia: Memories, Code: Realize Guardian of Rebirth, and Norn9: Var Commons are all set to launch later this year and they’re all otome titles with handsome men to make your own. 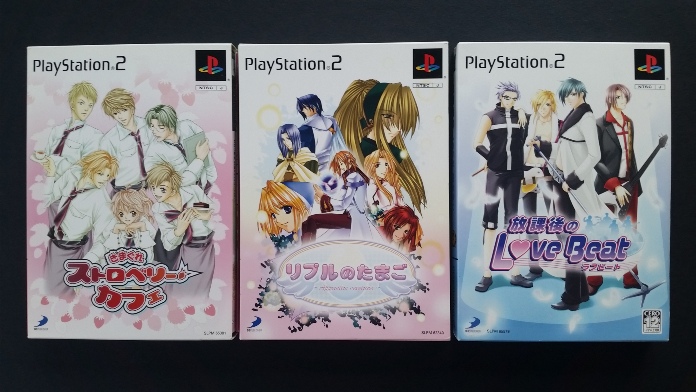 With an exciting batch of these games right around the corner, I decided to take a step back and look at a few otome visual novels from my collection which have never and likely won’t ever have official English versions. After all, these were titles that existed exclusively for PS2 and didn’t see PC releases. That’s pretty much a death sentence as far as potential ports are concerned, though it’s very likely you can find fan translations around somewhere. With that said, the three titles we’re looking at today are as follows: Houkago no Love Beat (放課後のLove Beat), Kimagure Strawberry Cafe (きまぐれストロベリーカフェ), and Ripple no Tomago ~Apprentice Magician~ (リプルのたまご ~Apprentice magician~). Each is presented in its Limited Edition form.

Houkago no Love Beat is a visual novel mixed with a bit of rhythm game/idol sim. You see, players take on the role of a songwriter for a boy band. During band performances, players control the band in an attempt to make them a success. In Kimagure Strawberry Cafe you’ve been left to take care of a cafe — management sim style. Fortunately, five gorgeous guys come along as your newest employees. Rippuru no Tomago ~Apprentice magician~ features a magical protagonist with only 100 days to cure a sleeping prince. Of course, despite the idea that he is the object of your affection, you can still go and date the other magicians. But, enough about the stories, let’s look at how each special edition fares. 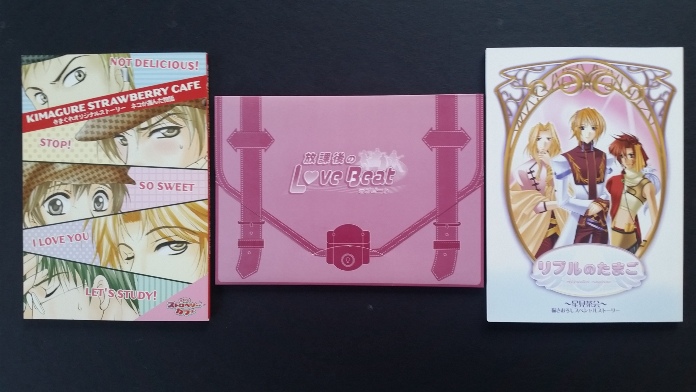 Unfortunately, in many ways the packaging feels uninspired. Every single one of these three games comes in a cardboard sleeve which features the same art as the DVD case. Two of the three titles also come with small booklets. Although you might assume them to be artbooks they’re actually just 56 page manga. Houkago no Love Beat shakes things up slightly with a folder that includes eight postcards featuring the different band members doing their best glamour shot. Why is it that each Limited Edition is so darn similar? The explanation is simple: each was created by D3 Publisher. Yes, that same D3 that now is known for series such as Onechanbara and Earth Defense Force. Before they found any particular success in North America, they were best known for their budget video game line known as the Simple Series.

Each of the these otome games was later turned into a Simple 2000 version. It’s worth noting that these releases did not come in a special edition format — after all, they were meant to be cheaper releases! At least the Limited Editions were around 5,040 yen (~$40), which in itself isn’t a ton to ask. In many ways each of these games feels similar to the launch editions that Atlus puts out. They tend to feature a soundtrack sampler or art book free of additional charge. Of course, because of that, folks aren’t so demanding with how good the quality actually is. The same is true of this otome title trio. They’re not truly stand out versions, but they most certainly look nice up on a shelf. 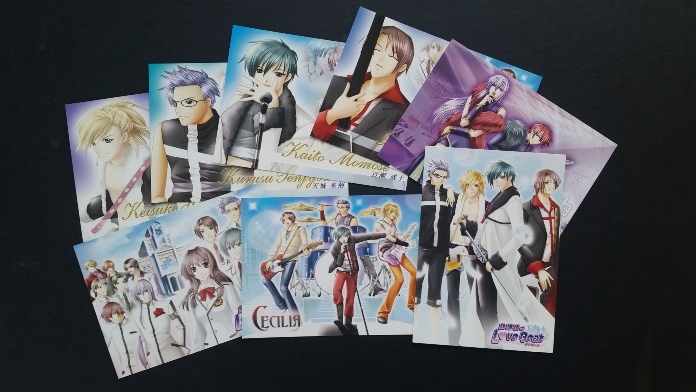 D3 released a massive bunch of otome games in the PS2 era. Fans of the genre will find that there are probably too many to purchase toward a complete collection. Because the Limited Editions are all so similar in appearance and items, however, there is no shame in opting for a barebones Simple 2000 Series version over them. Only the most diehard fans will find it worth the expense to import editions such as those presented here, as this is just a tiny sampling of all that’s out there.