Anyone who’s seen the most recent Assassin’s Creed: Syndicate trailer can gather that this Assassin’s Creed is about a pair of mid-19th century twins turned assassins.  It may sound a bit strange for an Assassin’s Creed game, but as the series begins to get more and more modern, the Industrial Revolution seems like the perfect setting for the next installment in this beloved franchise.

The game was officially announced a few months ago and is scheduled for an October 23 release.  Originally titled Assassin’s Creed: Victory from a few bits of leaked information back in December, Syndicate promises to outshine its predecessors by including new elements and experiences for players to enjoy including the introduction of both two protagonists, (Syndicate being the first main entry to the franchise to feature a playable female character), and the ability to freely switch between them.  Despite Ubisoft’s previous statement about character models for women being too difficult to develop, the woman of this game might be able to rival previous protagonists in the Assassin’s Creed franchise. 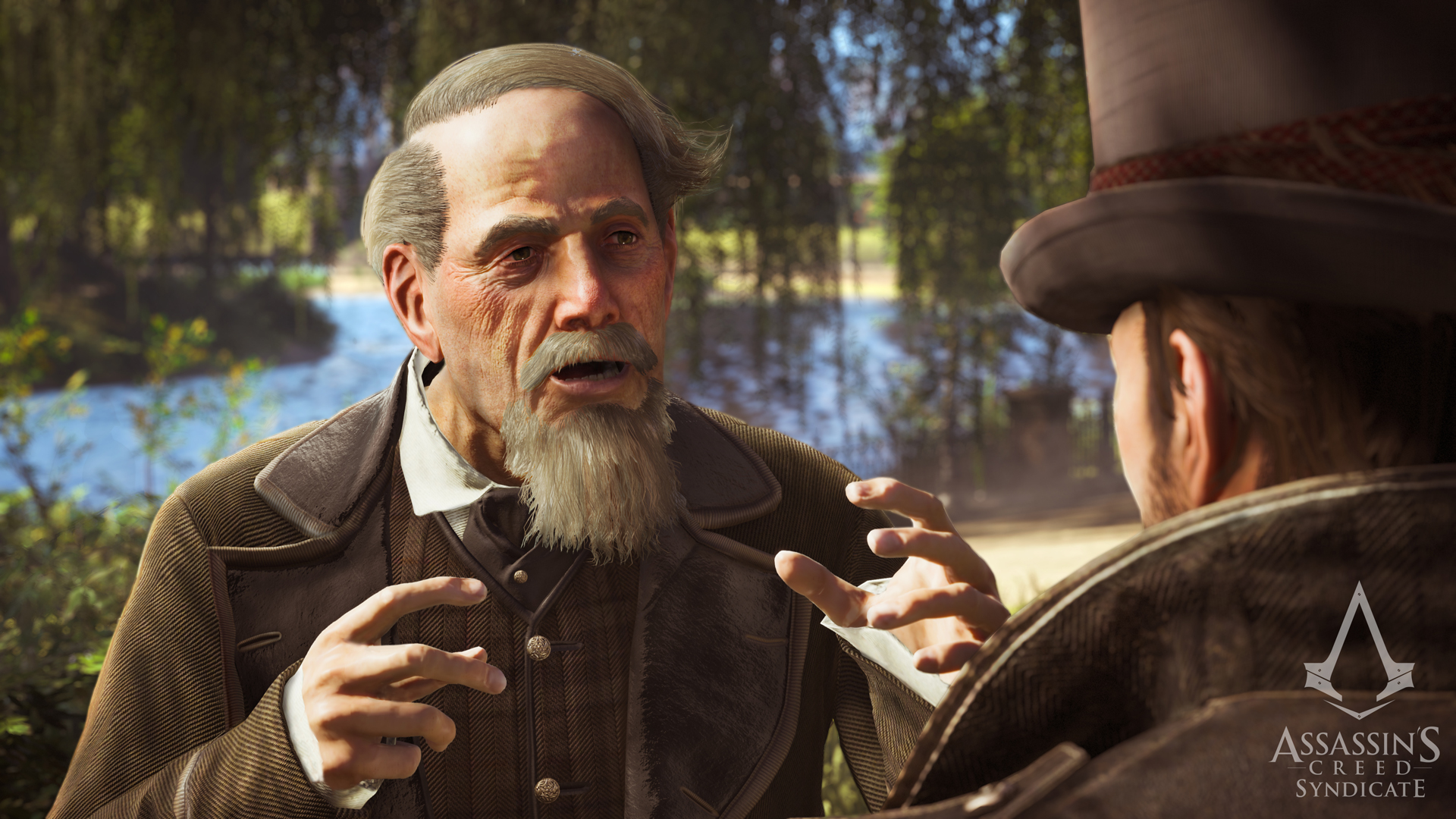 In Syndicate, Jacob and Evie Frye take on the Templars by uniting the criminal underworld of this chemically manufactured era with the help of a couple of famous names, (as there are in most Assassin’s Creed games).  Charles Darwin and Charles Dickens join our assassins, (maybe to discuss evolution and the development of Great Expectation), and add to the overall gimmick that is 1868.  Part of this gimmick includes the operation of horse vehicles, aka carriages, that are utilized not only as transportation, but as potential hiding spots as well as attack your enemies.  Trains are also going to be available as forms of transportation as well as the previously seen ships, though nothing has been said about naval combat, a feature favored by Assassin’s Creed IV: Black Flag lovers.  It’s clear that Ubisoft not only wants to add variety to the types of transportation provided in the game, but wants players to utilize them just as any Grand Theft Auto player would.  Vehicles can be chased after by police, crashed and destroyed, and taken from other civilians if that’s just the way that you play the game.

Combat is among the highest considerations for gamers when it comes to this beloved franchise.  Ubisoft has taken to the Industrial Revolution’s aesthetic and added close, short-knives and bare fists, combat to the mix.  This installment will be utilizing the combat feature a lot more often considering the time frame as well as the people who inhabited London, (gangsters, traders, policemen, etc).  Evie and Jacob will be looking at quick combat that might as well be considered dancing as they jump from enemy to enemy, shanking and punching, which was not necessarily doable in previous games. 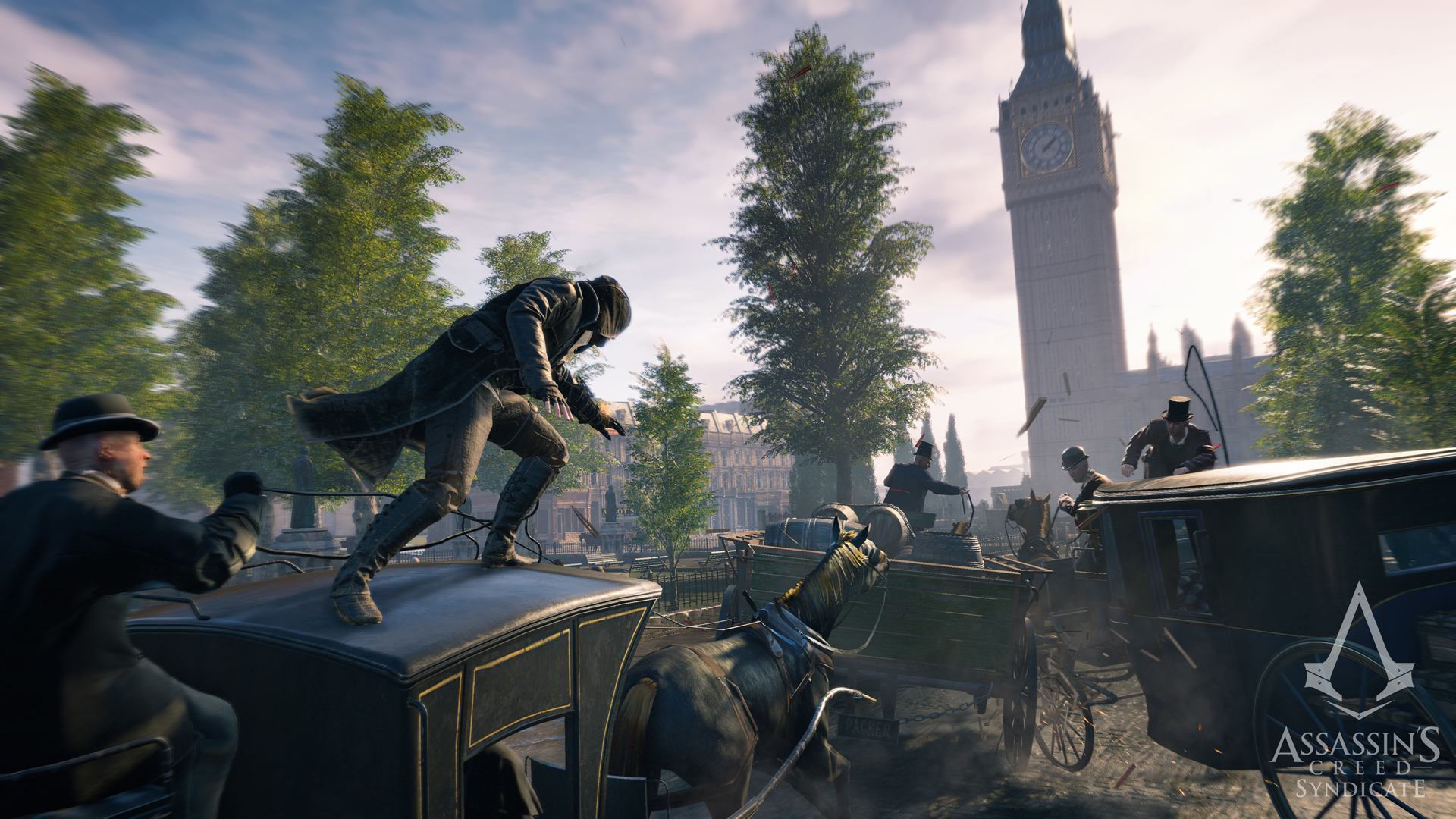 Previous games utilized close combat, but mainly relied on swords and ranged weaponry, (as per Assassin’s Creed: Unity’s Phantom Blade).  Part of the weaponry for Syndicate will be the newly added line launcher.  Similar to the Line Launcher from the Arkham series, this line launcher is shot vertically to quickly scale buildings and avoid awkward and laborious treks through London just to get to your destination.  This is mostly added due to the Unity’s expansive landscape and the difficulties that players went through just to freerun through their favorite freerunning game.  It not only adds as a great way to travel through the game but can also act as a quick escape device.

Assassin’s Creed: Syndicate looks to be a promising addition to the Assassin’s Creed franchise as well as the most innovative.  The scope provided here is nothing in comparison to what the game will offer once it is finally released, but the bit that is available to us now looks to be incredible.  Syndicate is beginning to shape itself into something that all types of gamers will be able to enjoy and glean on.  From the intensity of the open world and the different means of being able to travel through it to the new character swapping, Assassin’s Creed: Syndicate is something to look forward to this year.