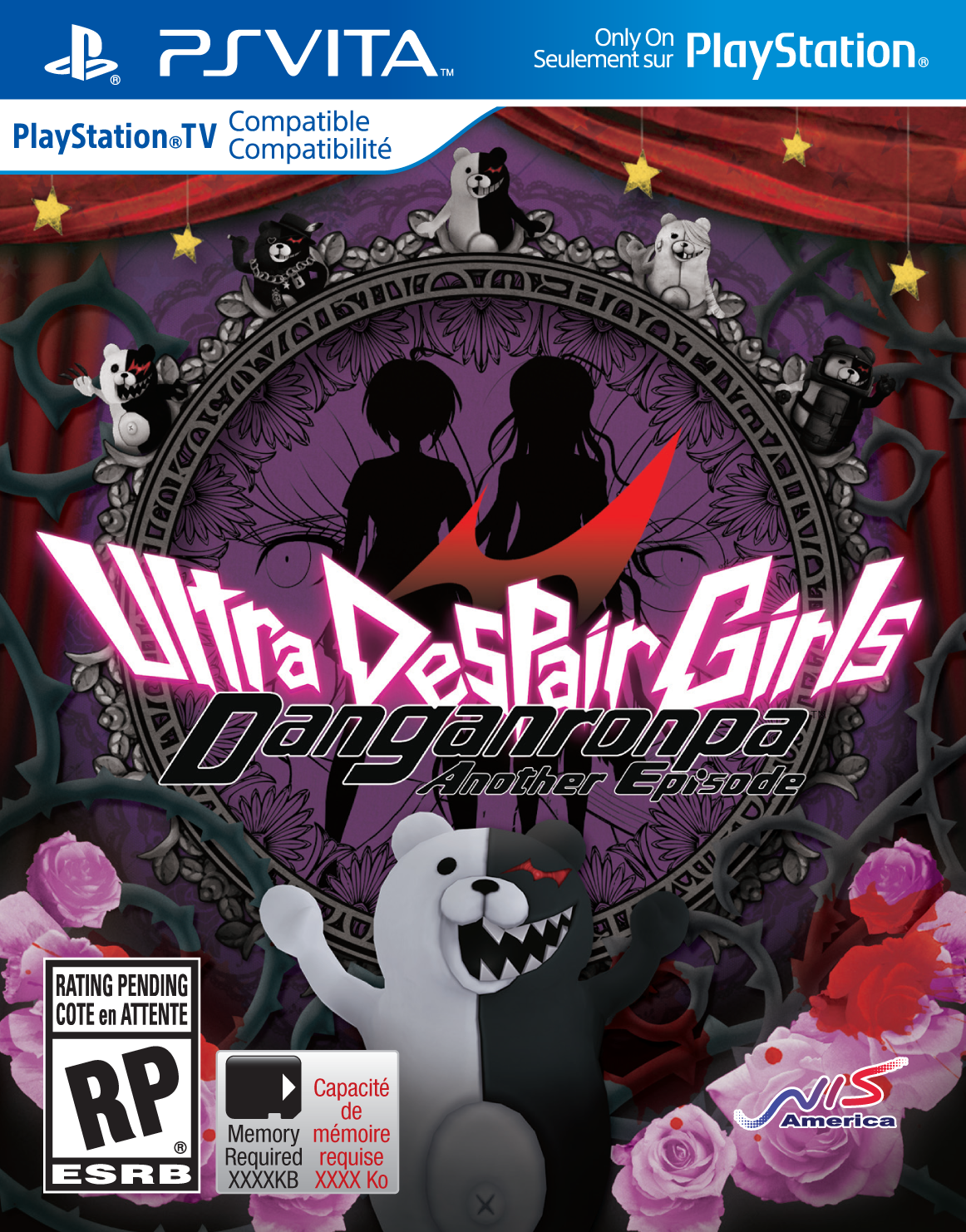 The Danganronpa series began, much to many English-speaking gamers’ surprise, on the PSP in 2010. Of course, the reason why so few of us knew about the games at the time was because they received no official localization. With the impressive success of the mystery-themed visual novel remake Danganronpa: Trigger Happy Havoc on Vita, however, Western fans gobbled the title up and demanded more. It appears that a revitalized interest in the series worldwide is what led us to Danganronpa Another Episode: Ultra Despair Girls. When it was announced, many fans balked at the shooting gameplay as it was something completely different from the adventure and visual novel goodness folks anticipated. That reaction totally makes sense, and I admit to having felt the same reservations. Luckily, this is a game which transcends these expectations and still manages to be authentic to the Danganronpa world despite pushing it into a different genre.

Because Danganronpa Another Episode: Ultra Despair Girls, like both previous titles, is so focused on storytelling, we’ll only go over the very basics here. Players jump in as protagonist Komaru Naegi. At the start of the game, she’s found herself stuck in an apartment for months on end due to some unknown captor. Suddenly, Monokuma breaks down the door and begins pursuit. With little knowledge of what the heck is going on, Komaru runs out, discovers even more Monokuma and is saved by Byakuya Togami. He gives her information of where to go, but she’s on her own until meeting up with Toko Fukawa. Although both characters and the player are left in the dark as to what’s happening, we do get a tidbit of information early on.

It appears that a group of children, known as the Warriors of Hope, are controlling these Monokuma robots. Their aim? Simple, to rid this location of every last adult so that all children may coexist peacefully by themselves. If it sounds absolutely ridiculous that’s because it is, but despite the outrageous concept, the story moves in seriously interesting directions during a playthrough. Those who’ve played Trigger Happy Havoc will recognize names such as Toko and Byakuya, as well as the fact that Komaru is sister to the protagonist of that game. This is because the two titles directly connect in that Danganronpa Another Episode: Ultra Despair Girls takes place after the first game. You don’t have to play it first to enjoy what’s going on here, but you’ll have a much greater understanding (and appreciation of character cameos) if you do. 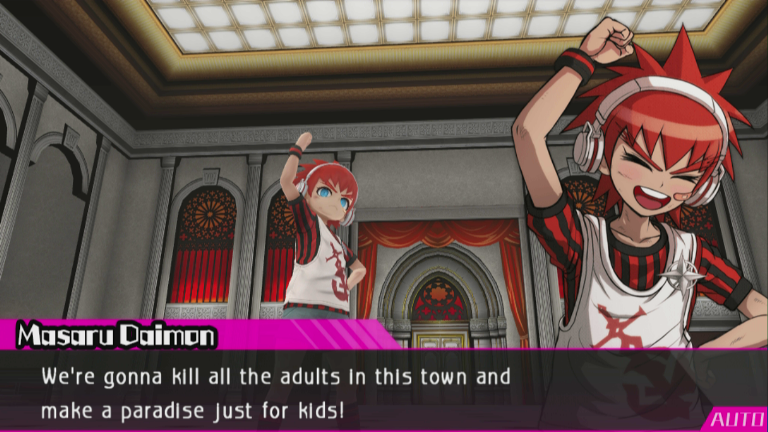 Spike Chunsoft still has the story skills necessary to make a great Danganronpa, but what about the actual gameplay? Basically, players explore the 3D world from a third-person perspective and are offered a behind the shoulder view when shooting rampaging Monokuma. Although there’s a ton of story scenes (which are presented much like the previous visual novels), there’s also a great deal of running around and fighting. This leads to a real toss up as to whether the gameplay is actually good or not. Although functional, it’s hard to say that any of the shooting components are particularly enjoyable. It just feels like a game from an older time when shooters were a bit of a slog rather than smooth to control and exciting at every turn.

One small part of the reason that Danganronpa Another Episode: Ultra Despair Girls feels old is simply due to the dull landscapes. There’s really very little in this world to interact with — but you’re still expected to explore. Primarily, there are hidden notes, books and the like scattered around for folks to discover. One collectible in particular is used to help rank players at the end of a level and some of their hiding spots are supremely annoying to discover. As for running about, the automatically-tracking camera made me motion sick. You can manipulate the camera yourself, but moving the right analog stick while trying to simultaneously push face buttons on a Vita provides an incredibly awkward hand position. 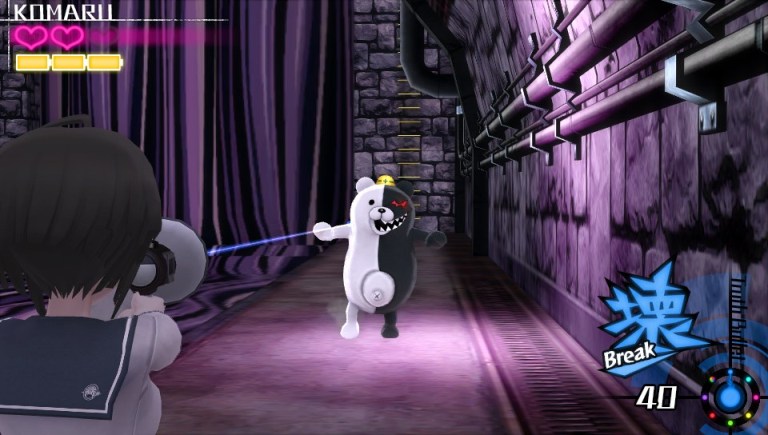 Luckily, there’s usually not a ton of Monokuma to fight against at once. As long as you can manage to take them down fast, there’s little potential for problems. Getting a headshot (or, in this case, a shot in a Monokuma’s single red eye) yields an even faster way to defeat enemies. New bullet types are unlocked throughout play and each is necessary in specific instances. There’s also limited ammo, which may annoy some. In the instance that you’re out of ammo, or simply need to take down a big group at once, you can utilize Toko’s “Genocide Jill” form to unleash melee attacks for a limited time. Players are also able to upgrade Komaru and Toko with collectible new features and purchasable upgrades. Some are incredibly helpful while others actually may detract from your personal playstyle.

The third-person shooter portions of gameplay function despite not being particularly enjoyable. In a means to change up gameplay, a variety of puzzle rooms are encountered. Some are riddles handed down by children and are typically very easy to solve, while others are Monokuma puzzle rooms which require you to look at a top-down view of the room in order to chart out a “perfect” take-down method. These rooms can be retried as much as desired, though it detracts from your level rating to do so, and are a bit more fun since they’re more about intellect than headshotting, but they still detract from the main allure of Danganronpa Another Episode: Ultra Despair Girls — the storyline. Over the approximately twenty hours it takes to beat the game, the storyline is the motivation to push through. Danganronpa Another Episode: Ultra Despair Girls is great, but this greatness lies primarily with the tale it weaves and character interactions. Fans of shooters will likely find it too simplistic and antiquated to enjoy (yes, even with the multiple bullet types). Folks coming in from a visual novel fandom will presumably also dislike the shooting because it spaces out the time between storytelling segments and isn’t particularly fun. Given the gameplay is totally functional, however, it’s possible to excuse it after seeing some of the more intense story-based moments. As long as you’re aware of the middling shooter gameplay which takes up about half the experience, you’ll still be able to enjoy the outrageous, hilarious, depressing and ultimately impressive writing of Danganronpa Another Episode: Ultra Despair Girls.