Who on earth puts giant pinball bumpers in the middle of a busy city?  Does the Department of Public Works have some kind of deep and vicious feud running with the Department of Transportation?  Is there some interdeparmental rivalry running so deep that bumpers, bounce-pads, and accelerator pads seem like a valid use of taxpayer funds?  Because it’s paying off pretty nicely in OmniBus.

OmniBus is a game that popped up on Kickstarter a couple days ago, complete with a demo giving a nice taste of all the bus-driving madness to come.  You control a bus in a series of levels with objectives ranging from crashing through every level of a skyscraper after being dropped from a great height, to making sure at least one tourist doesn’t get thrown from the top of a double-decker bus during a tour of the city, to getting enough speed to bust through a bank then collecting $1,000,000 scattered throughout the level.  It doesn’t help that the bus keeps getting faster the longer you play, and it isn’t the most stable form of transportation when taking sharp corners.  A simple overturn can easily see the bus go tumbling through the level, crashing through buildings and bouncing off inconvenient bumpers while leaving a trail of wreckage in your wake.  Which, it should be mentioned, is only a problem if you get bounced out of the level or end up turtled, because if those building were supposed to be there they wouldn’t be so fragile. 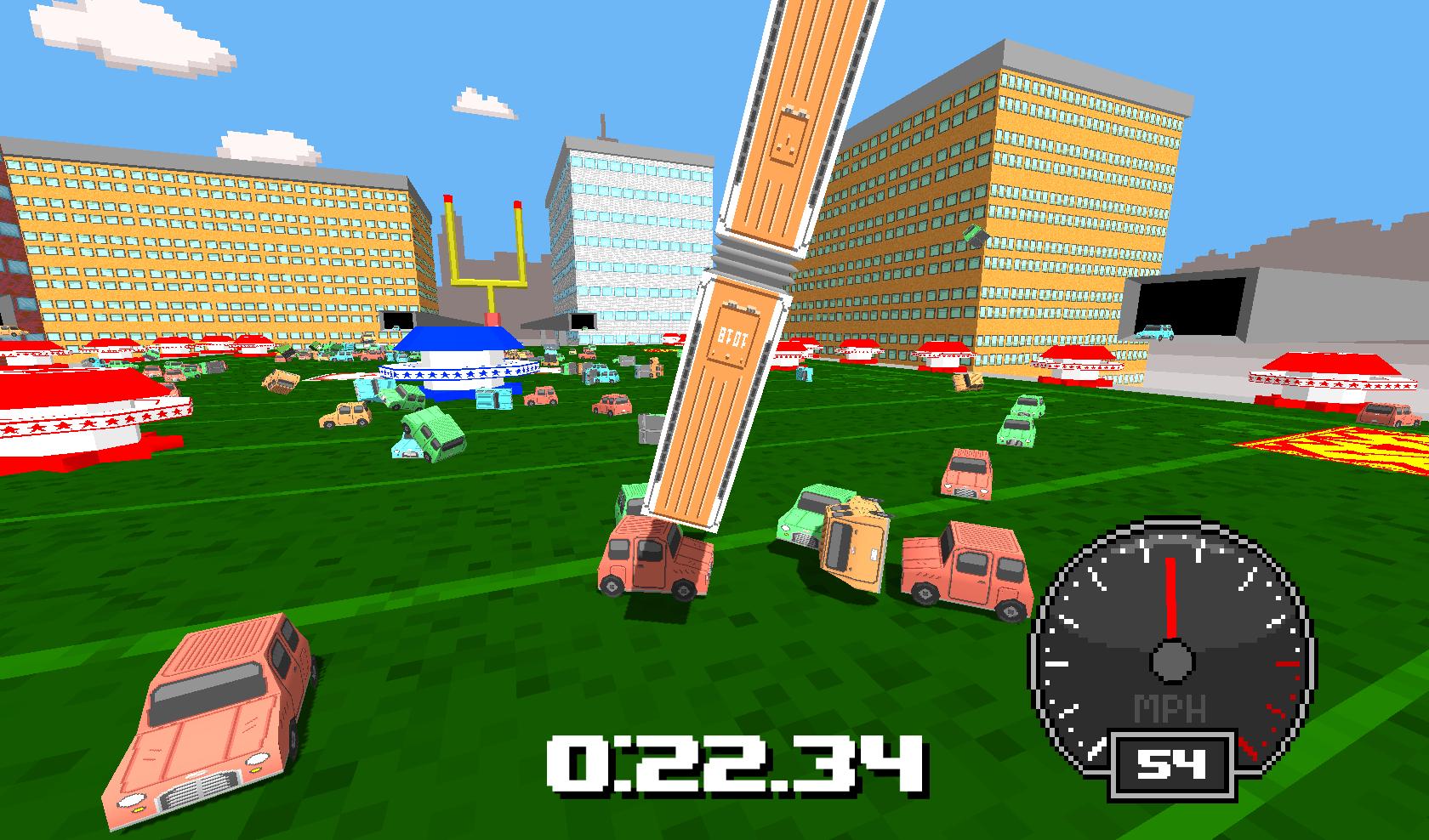 Just a bus flipping through the air above a footall field covered in bumpers atop a skyscraper with a million cars streaming in. You know, the usual.

While there are only six levels plus a sandbox mode in OmniBus so far, its aspirations to be a PS1 throwback are obvious in more ways than simply the graphics.  This is a game from the same design school as something like Power Shovel, which took a single mechanic and then went nuts with it in as many ways as it could.  Each of OmniBus’s demo levels does something different, and the Kickstarter pitch video shows a number of other ideas as well.  I particularly like the one where a ramp guides the bus up a side of the building covered with bumpers while cars rain from the sky.  The architecture and city planning may be suspect but it’s hard to say No to that kind of challenge.

Head over to OmniBus’s Kickstarter page both to give the game a look and check out the demo.  You do want to bounce a giant indestructible bus off a bumper and through a building, right?