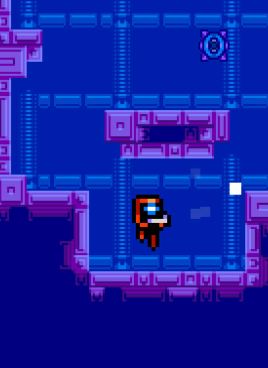 Last year, Xeodrifter hit the 3DS and PC to positive reviews. The 3DS wound up being a perfect home for a bite-sized Metroidvania, while Steam didn’t have many games like that on the service then. Neither of those releases, however, gave console-centric gamers a chance to enjoy the experience. Renegade Kid’s games have been well-received, but haven’t gotten much love on consoles until now. Xeodrifter pits you against four small planets and tasks you with conquering its bosses and acquiring power-ups along the way.

Like any game inspired by Metroid, there is quite a bit of freedom in how things are done. Initially, you will need to use trial and error to figure out which planet you can go to. You might find that you can defeat a handful of enemies in one area, but can’t make any progress beyond that due to the level layout, then realize that you need to move to one of the other planets, but which one? Each can theoretically kill you faster than the initial planet since you’re at least somewhat used to its threats, but these could be all unknown enemies.

As luck has it, not too many new enemy types are encountered this early in the game. Colors change and attacks may speed up, but you will generally just need to tackle the same foes in a different order. Progression can also easily be a matter of changing direction, which can make things a bit trickier as you have to approach from a completely different angle. Jumping up and aiming down might have given you an edge before, but having to jump up and aim down may give you less wiggle room and thus less time to avoid a shot.

While strategy is something players always employ in a Metroidvania, Xeodrifter ups the ante by limiting the amount of damage you can take. Three hits will kill you by default, while additional hits can be earned by exploring. Of course, with only a few hits to spare, exploration itself is far more risky than usual. Most games will allow you to do some exploration and incur a small amount of risk with the possibility of a great reward. Xeodrifter will give you a big boost in your health relative to what it begins as, but makes you earn it. Checkpoints are few in number and generally just extend to boss rooms. Dying any time between the beginning of the stage and that point will send you back to the beginning of the planet. 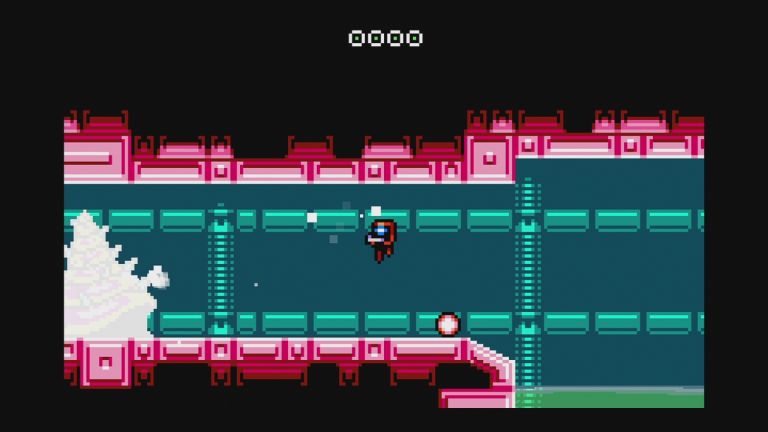 This means that you’ll need to upgrade things as soon as possible. Your core skills can be upgraded almost instantly with a submarine power-up that sends you into the watery depths and allows you to blast away at enemies. Unlike your normal form, however, you’re in a bulky ship and can’t duck out of the way. Skill and/or pacifism may be the keys to success as you master the timing to avoid enemy fire.  On foot, you have far more speed — but that can lead to you rushing into shots as your jump can send you into the air a bit too quickly. Much like NES platformers, you need to feather your jump a bit.

Unlike any NES platformer, this one allows you to go into the background with a power-up. This enables you to explore new areas and will add to the challenge in its own right due to the perspective shift. The foreground is still visible, so it can be somewhat difficult to accurately judge where you are in relation to your enemies. Enemy fire looks much smaller than usual, and unless you’ve upgraded your guns to give you more power and thus larger sprites, it can be tough to see where you’re aiming. This will need to some needless death and frustration, even if the other power-ups are pretty useful.

Having the ability to dash through otherwise impossible structures is great and it speeds up the gameplay too. The most valuable upgrades you’ll find are to your core skills. Jumping and shooting upgrades will make traversing the land much easier, and the gun upgrades especially make you feel like an overpowered demigod when you go back to early areas. It adds to the sense of progression when you suddenly have all of this power and take out formerly-tough enemies in a couple of hits. It makes every boss battle and death worth it. Speaking of bosses, the slight attack pattern change and palette swapped nature of them is disappointing. 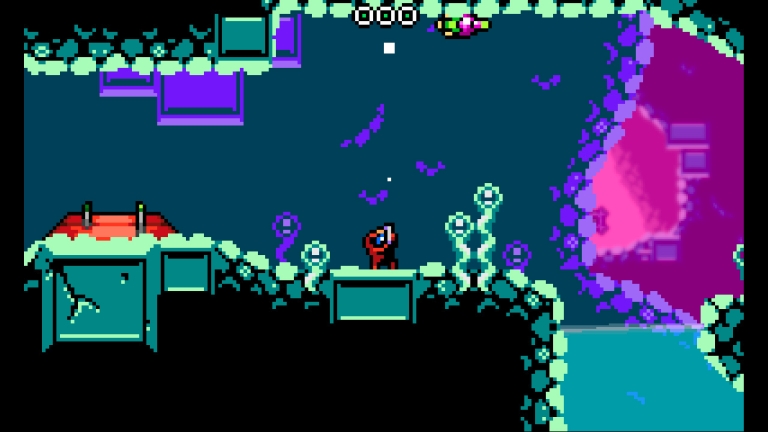 Luckily, that’s the only part of the graphics that falls short of expectations. The worlds themselves merge the 8 and 16-bit styles together quite nicely, with a simplistic overall color scheme that would have been at home with the NES. However, it also features more color shading than was the norm, and its overall clarity is more in line with a SNES game. The animation is limited for your character, but that’s just fine — it enables you to time everything perfectly. Enemies have more elaborate animations to give you a chance to learn their patterns and thus gain the advantage and win.

Xeodrifter‘s soundtrack is subdued in a marvelous way. While Metroid suckered you in with scary music to keep you on your toes, you’re lulled into a sense of false security by the game’s chiptune soundtrack. It’s quite a bit happier-sounding than the on-screen action implies. There are more intense parts to the songs, but generally, the music doesn’t feed into the somewhat dark settings. The contrast is striking in a good way, as the chipper tunes make it that much easier to soldier on past tough areas. The NES-style sound effect work is fine and still manages to get across things like weapon power and the strength of your new abilities with a fairly small amount of sound effects present. It’s impressive, and Renegade Kid’s passion for the NES days shines through in this area perfectly. 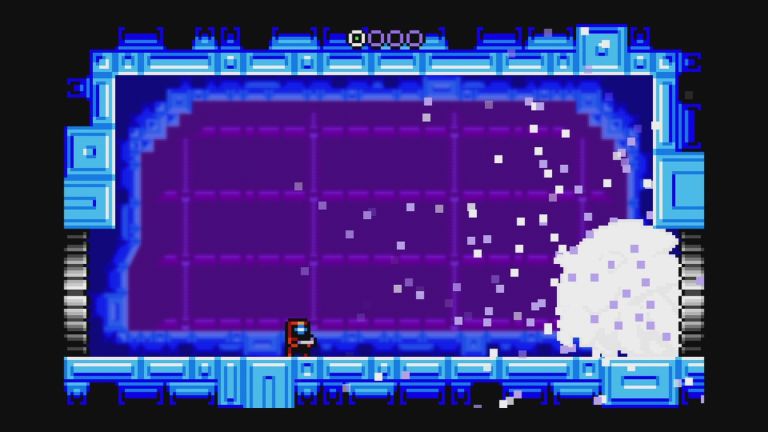 Xeodrifter condenses the core gameplay of Metroid into an experience that blends action and strategy without much filler and that doesn’t waste a moment of the player’s time in the process. The controls are smooth, while the animation and sound design fits the NES-to-SNES era that Renegade Kid loves to a tee. Anyone who enjoys Metroidvania gameplay will enjoy this; even if its repetitious boss battles stand out as a glaring weakness, the core game is a blast to play and surprisingly diverse as well.