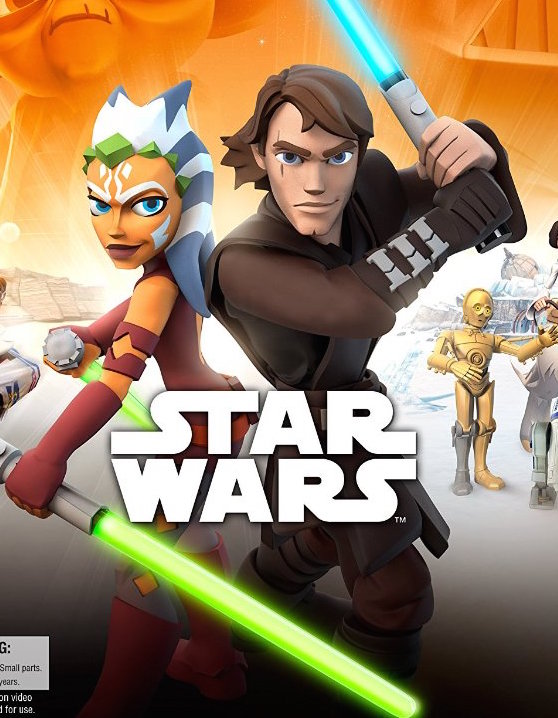 It’s Disney Infinity with Star Wars. The review could end here as that simple statement should be enough for most everybody to snag a 3.0 Starter Pack immediately, but as you’re reading this review and not in line at Toys R Us right now, we’ll assume that simple idea hasn’t swayed you and you’re wanting to find out more about what makes this collaboration so great. So fine, we’ll delve into it, but just know that you’re wasting valuable Death Star destroying time.

Disney Infinity did the impossible* task of challenging the runaway hit Skylanders when it burst onto the scene three years ago. We put an asterisk after “impossible” because if there was one company who had the brand power and resources to do it, it was Disney. Although immediately a strong property, things started off admittedly slow in retrospect. The whole concept was confusing inside and out with multiple SKUs physically and multiple game modes internally. After finally making it past the learning curve, players were treated to a neat cross-IP experience that blended the fun of collectibles with the sheer enjoyment of seeing multiple different characters come together in one experience. Disney Infinity 2.0 didn’t make many changes to the formula, but did offer up a dramatically improved Toy Box mode that brought it from a neat extra to the undisputed centerpiece of the experience. Now Disney is back the third year in a row with 3.0 and instead of just refreshing the brand another year, they’ve made dramatic changes that make it feel less like an update and more like the beginning of a new era for the property.

Of course, whatever Disney did to Infinity this year would be eclipsed by the fact that it was now based around the Star Wars universe. Fans have been wanting Star Wars to be incorporated into Infinity from the beginning and the second that The Force Awakens was announced, it seemed like a sure thing. Thankfully they didn’t wait long and after successfully tackling the Marvel universe last year, Disney is going all-in with the house that Lucas built. 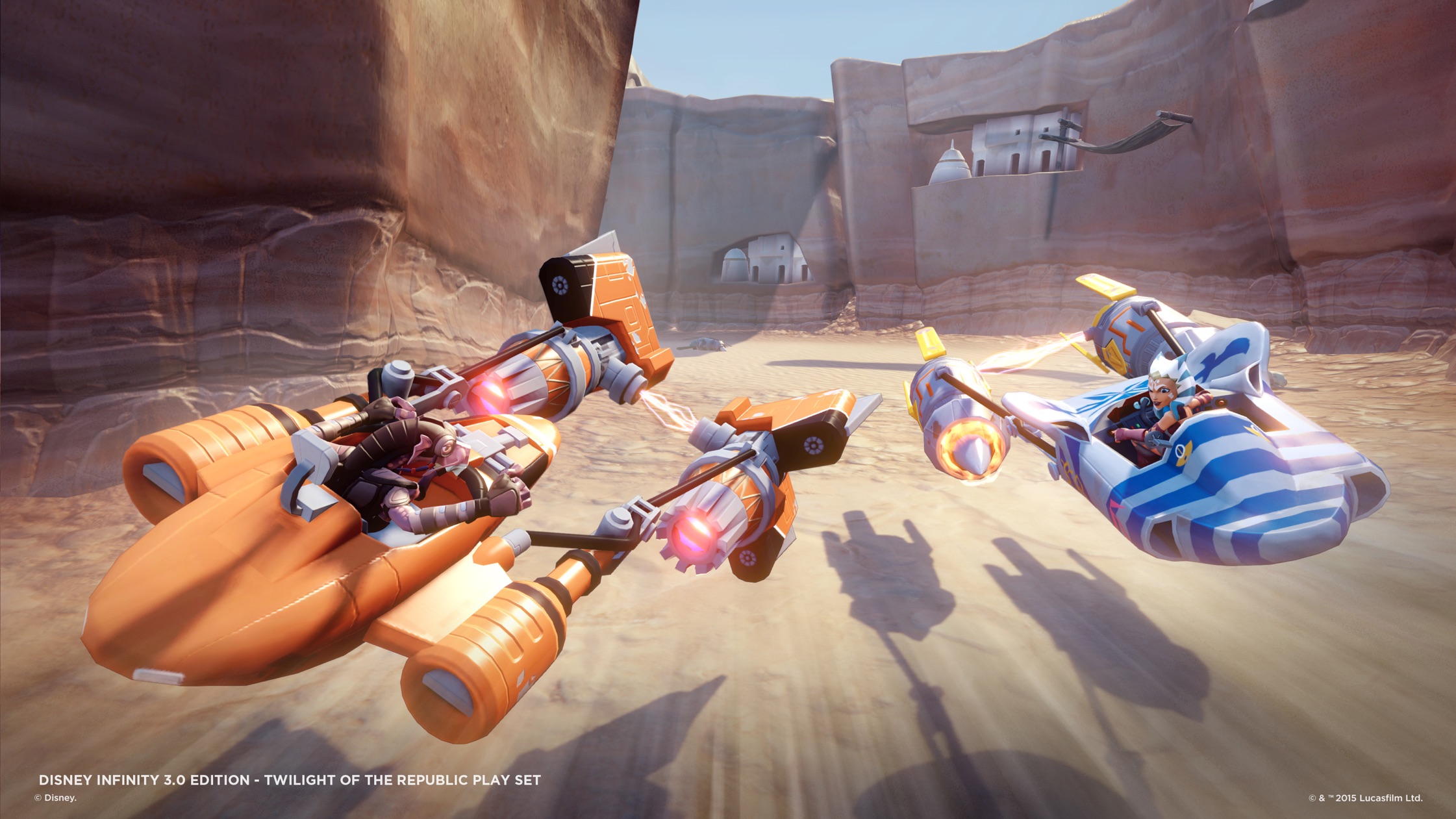 The core of the Star Wars experience revolves around the two Playsets available at launch. Twilight of the Republic, included with the 3.0 Starter Pack, is arguably the premiere set. Developed by Ninja Theory in cooperation with Avalanche, Twilight is based on the prequel trilogy and set near the end of the Clone Wars. Players can travel to four locations including Coruscant, Geonosis and Naboo. Rise Against the Empire is likely to be the most popular Playset simply due to the fact that it’s based on the original trilogy. This set offers the most varied gameplay, allowing players to take down AT-ATs in a snow speeder on Hoth, jump on a speeder bike and evade stromtroopers on Endor and join forces with R2D2 in an X-wing to destroy the Death Star (and if that was a spoiler, then you should crawl out of whatever hole you’re living in that somehow has internet access).

While the original Infinity featured a few Playsets that rivaled full-fledged platformers, 2.0 dropped the ball a bit as although its Playsets were fun, they sometimes relied on the generic mechanics of the overall game. Both Star Wars Playsets, however, are deep and well designed enough that they could work as independent games outside of Infinity. Neither reinvents the wheel, but they are taut little platformers that capture the fun of entering the world of Star Wars without being convoluted. All of the highlights from the original six films are featured. In the Geonosis fight in Twilight, for instance, there is constant action in the backgrounds; distant droid fights, ships crashing down to Earth (er, Geonosis) and the environments being altered by the course of battle. Moreover, Empire’s Death Star fight boasts tons of Tie Fighters and X-wings zipping around space at a breakneck pace. Both of these games are a blast and something that Star Wars fans of any age will appreciate. 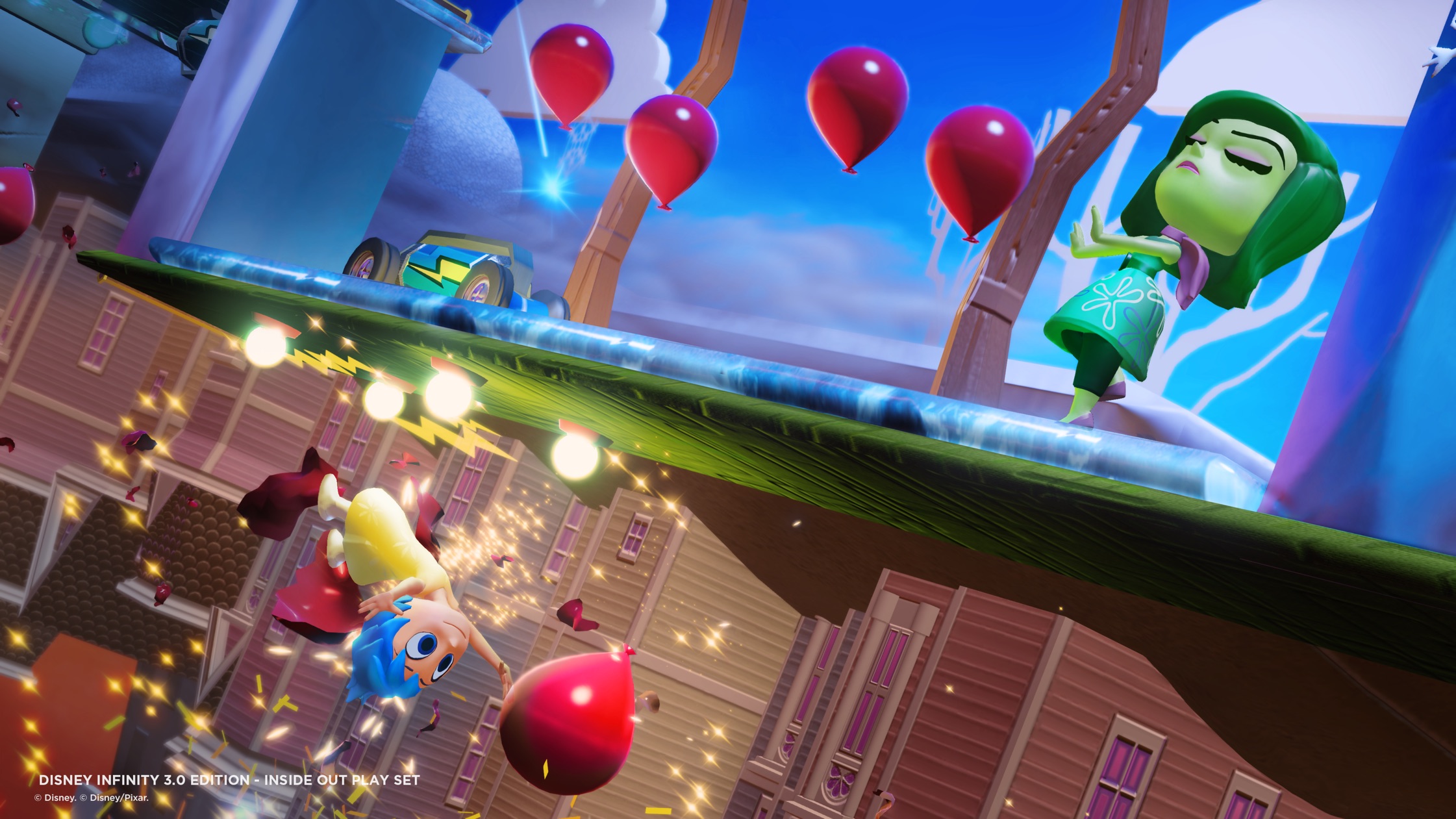 Even with the massive amount of Star Wars content packed in 3.0, surprisingly that’s not all Disney is offering in the experience. Not only is there a Playset based on the surprise Pixar hit, Inside Out, but they’ve released several new non-Star Wars figures to play around with in Toy Box. There’s now figures for Olaf, Mulan, Mickey and Minnie. Most importantly, however, Tron has finally (actually surprisingly quickly given that Disney seems to have heartbreakingly abandoned the IP again) been added to the mix with the addition of Tron Legacy’s Sam Flynn and Quorra. Not only is it awesome to play as both of them, but much like the other “generic” Disney figures introduced, it puts an emphasis on their universes in-game. The bliss of seeing The Grid in Disney Infinity or a Recognizer randomly float by simply has to be experienced to be described.

But now the figures unaffiliated with Playsets have more to do than ever before thanks to the impressively redesigned Toy Box Hub. In previous iterations (especially the original), one of the biggest issues holding the franchise back was simply how overwhelming it all was. There’s a lot to do in Disney Infinity and it wasn’t always clear where to start. In 3.0, players are immediately dropped into a redesigned and playable Toy Box Hub, where they can get briefed on every feature Infinity has to offer at their leisure. This eases players in to the point that it makes the experience more enjoyable and ensures that key components of it aren’t overlooked. 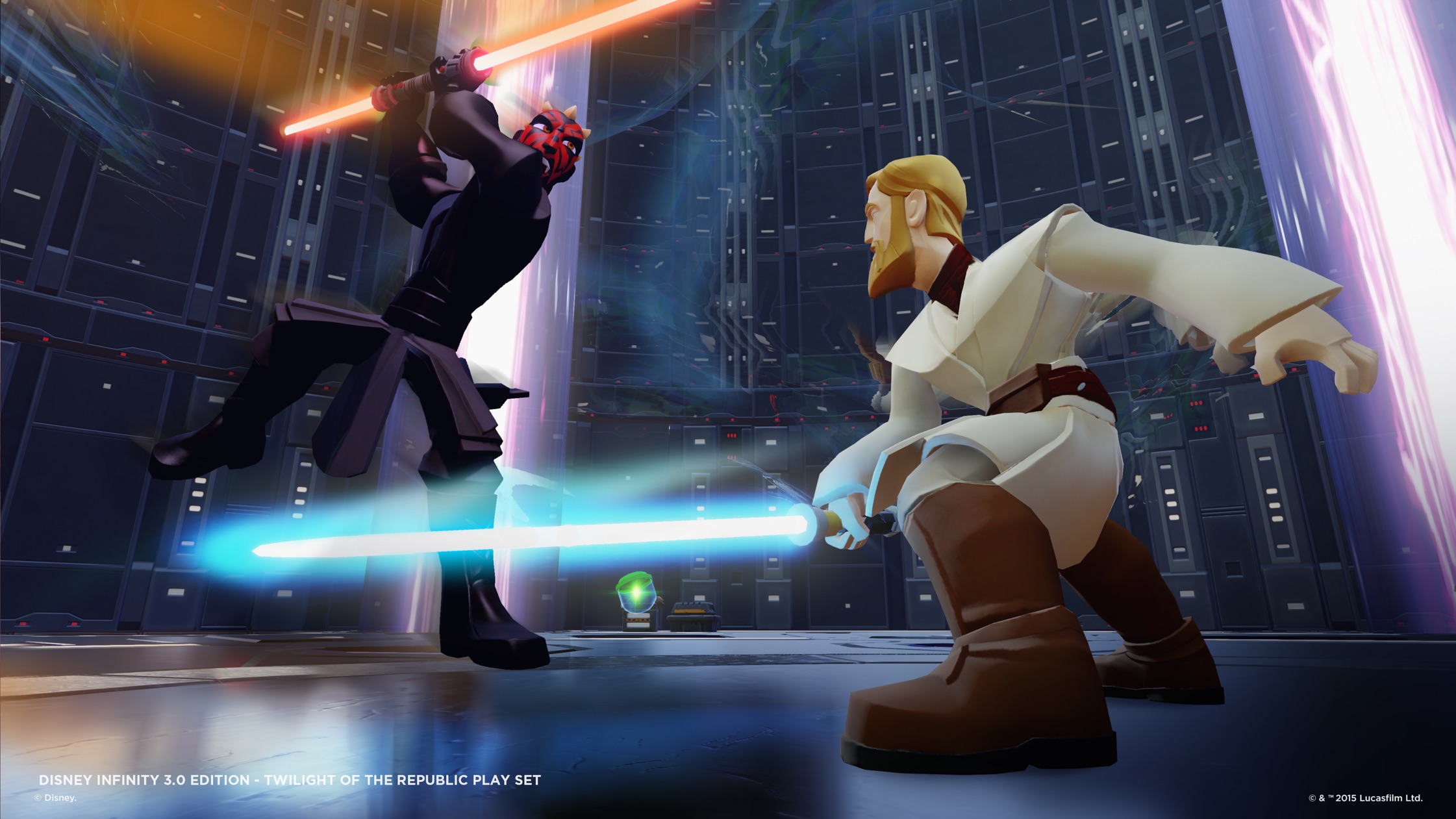 There’s more Toy Box gameplay than ever before with activities like the Exploration Adventure World that challenges players to complete a series of obstacle courses. More elements from the house of mouse are incorporated in the hub, with Hollywood’s famous El Capitan theater standing in for for the community features access point and Flynn’s Arcade (yes!) serving as the home to matchmaking. Two Toy Box expansion games can now be purchased separately that offer the diverting games Toy Box Takeover and Toy Box Speedway (likely a way to incorporate racing in the game to avoid losing out to the upcoming Superchargers).

Physically, things are as good and in some cases better than before. The figures are as stunning as ever. At this year’s E3, Disney set up a fantastic display case with every figure so far and seeing them all together is a thing of beauty. No doubt some collector’s have done the same and they’ll be proud to add all of the new additions to their oeuvre. Thankfully, Disney has done away with the random Power Disc blister packs and instead now sells three separate labeled sets ensuring consumers won’t end up with duplicates. 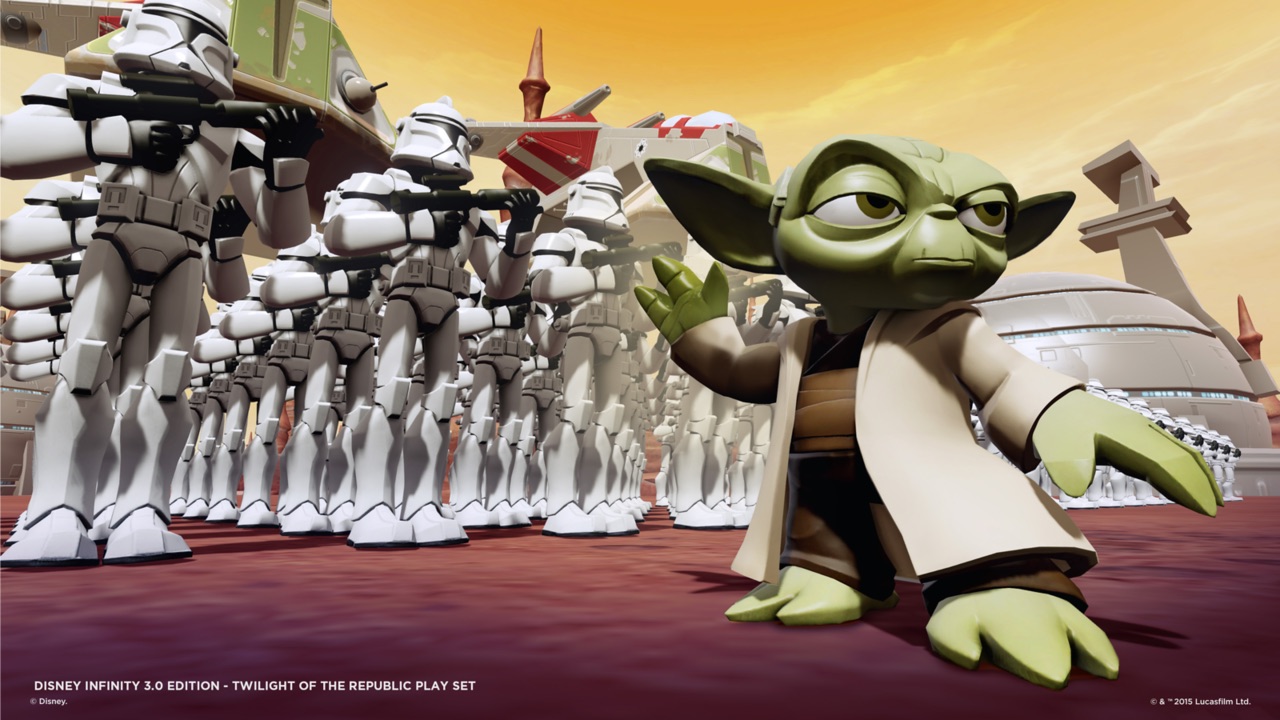 Disney Infinity was a bold venture even by Disney standards, but it’s one that has rapidly come into its own. 3.0 is a leap forward for the franchise, offering an exceedingly well-presented universe that’s easier to explore than ever, but features enough content to easily keep devotees occupied for as long as desired. There’s something to do in every nook and cranny and the additional Play Sets could all stand on their own, with solid platforming mechanics and strong, fluid visuals (an issue in the past). While Disney likely could have moved an exceptional amount of product simply by saying “it’s Disney Infinity with Star Wars,” they’ve instead reconfigured the experience to be more enjoyable than ever. Fans of Disney, Star Wars, Tron, Pixar and just plain fun are going to have a blast in Disney Infinity 3.0.