Many believed the days of peripheral-toting music games had come and gone, but this fall both Guitar Hero and Rock Band are shredding back onto the scene with new installments that look to revitalize and even reinvent their once lauded brands. But despite their historic similarities, this time around one of the two bravely and emphatically takes the experience to the next level, making the other look and feel like a game regrettably stuck in the past.

Let’s not mince words — during our time with both games at PAX Prime, Guitar Hero Live was far more impressive than Rock Band 4. This is true for a number of reasons, though nothing as shallow as a preference for one game’s song selection over the other. The Guitar Hero game FreeStyleGames is developing is significantly more interesting than the tired and predictable Rock Band being put forth by Harmonix. It takes risks, and attempts to give players a comprehensive guitar playing experience unlike anything either series has attempted before. 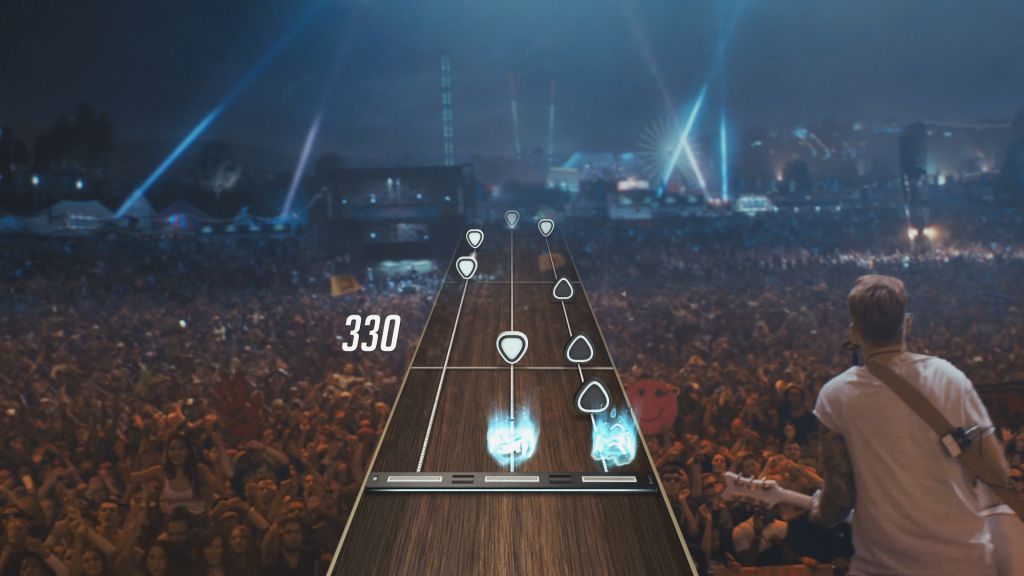 Anyone who has played a Guitar Hero or Rock Band game in the past will be familiar with the colored buttons and their layouts on the neck of each game’s respective guitars. Rock Band’s controller looks the same as it always has, and that’s part of Harmonix’s mission with Rock Band 4: giving players something that slots in alongside the rest of the Rock Band songs and accessories they’ve accrued over the franchise’s history. Every peripheral from previous games in the series will be compatible with Rock Band 4, making Harmonix’s game not only more affordable for returning players, but also more familiar.

Conversely, Guitar Hero Live’s mission is to redefine what it means to play Guitar Hero. For FreeStyleGames, this means rebuilding the game from the ground up, starting with the guitar. The five colored buttons of old are replaced with two stacked rows of three, one black and one white. Players will learn to use both simultaneously, forming their fingers into shapes more akin to actual guitar technique than the single-string feeling of classic Guitar Hero (and Rock Band 4). That effort — making the player feel more like a guitarist — doesn’t go to waste. FreeStyleGames has designed an immersive, dynamic and unprecedented performance display system, replacing the stylized performers and audiences of older Guitar Hero games with recordings of live listeners and bands, making the experience much more realistic than any music game before. It all happens from a first-person perspective, giving players the chance to experience the thrill of performance from the eyes of the guitarist. What’s even more incredible, however, is how the crowd reacts to the performance. Using multiple takes and some clever editing, FreeStyleGames has been able to create a system that provides direct visual feedback on the performance, whether playing flawlessly or choking on stage. The entire experience is unlike anything attempted in a Guitar Hero or Rock Band to date, and altogether makes Guitar Hero Live feel refreshingly ambitious. 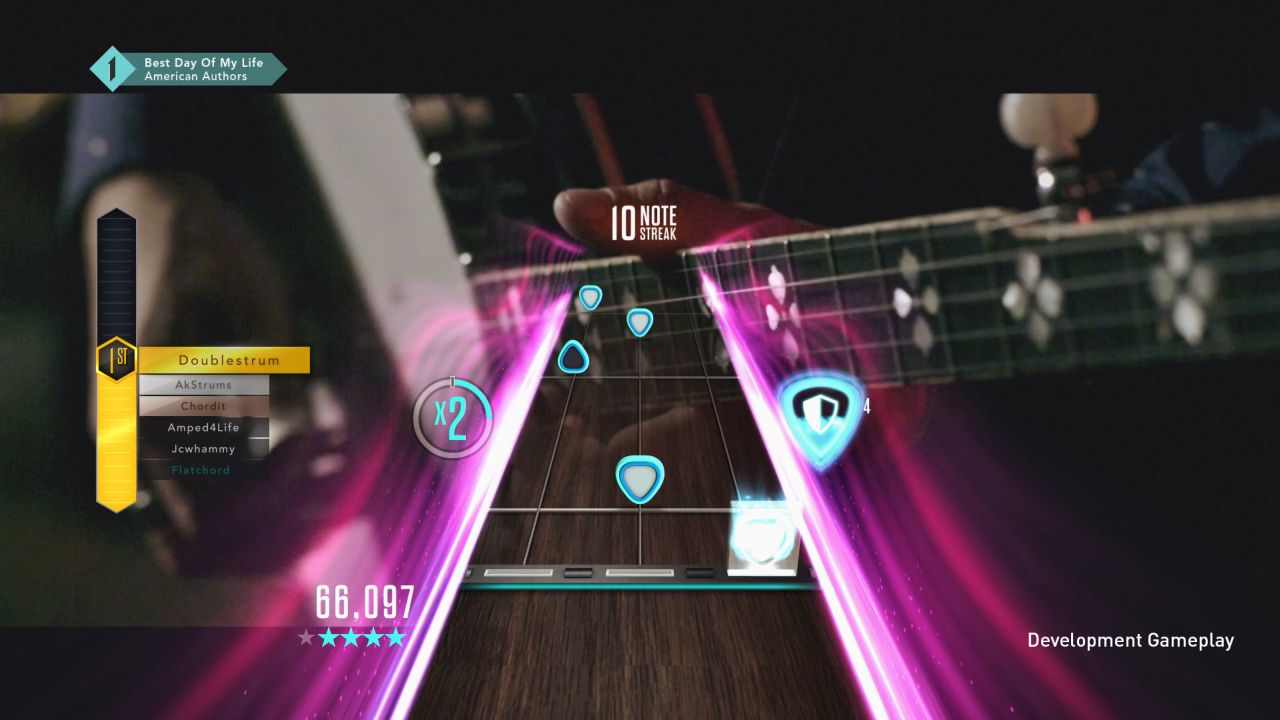 The game’s online mode is equally intriguing, giving players a choice of “stations” to play songs from specific genres in real time alongside players from around the world to compete for the highest score. This mode, Guitar Hero TV, also trades the dynamic audience videos of the offline mode for the full, officially licensed music videos of hit songs. FreeStyleGames once again pushes the franchise forward here, providing players with another first-hand experience with an additional  side of the music industry.

That isn’t to say that Rock Band 4 doesn’t have a few things going for it as well, because it’s still a game many fans will be drawn to. Rock Band’s guitar controller still has more buttons than Guitar Hero Live’s, which could well make it the more appealing of the two for players looking to test themselves with the most complicated plucking possible. On top of that, Rock Band 4 introduces a brand new Freestyle Guitar Solo feature that lets players create their own completely unique guitar solos in their favorite songs. Depending on the player’s finger placement and strumming frequency, the game will procedurally generate a guitar solo that is guaranteed to rock, providing a unique venue for experimentation and self expression that Guitar Hero Live simply can’t match. With that said, however, it felt a little too much like Wii Music; you’re pressing buttons, sure, but the game is deciding which notes it wants to play. Let’s also not forget that because of Guitar Hero Live‘s efforts to refocus on the guitarist, Rock Band 4 is the only game releasing this fall that offers the mutiplayer, full-band experience both Guitar Hero and Rock Band featured in their last installments. Guitar Hero Live still has two-player guitar playing and even room for a singer, but Rock Band 4 offers all that along with drums and bass. Harmonix’s upcoming rhythm game will also have a significant advantage in content selection at launch, as Rock Band 4 players will be able to enjoy not only a new collection of songs but also each and every song they downloaded in previous Rock Band games. 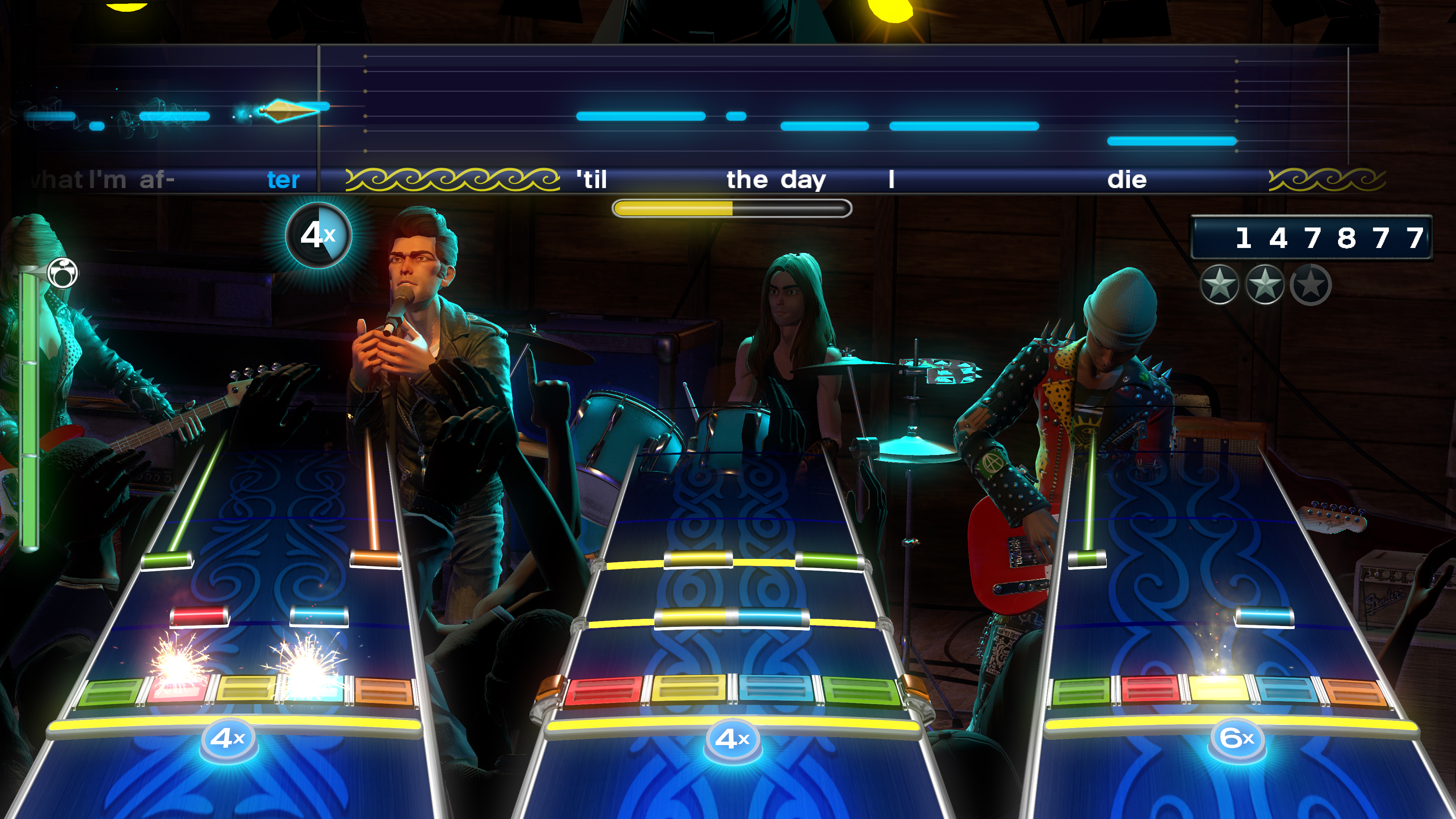 In the end, the different approaches taken by Guitar Hero Live and Rock Band 4 can only benefit fans of either series; who wants two identical products? One game offers a familiar experience enhanced with a few interesting additions and a staggering library of legacy content, while the other breaks new ground in both design and gameplay, feeling like a franchise born anew. For our money, we prefer Guitar Hero Live‘s immersive and realistic presentation. We’re ready for something new from Guitar Hero and Rock Band, and Live‘s holistic appreciation for guitar playing and music feels more authentic than the arcade-y, familiar and safe direction Harmonix has gone with Rock Band 4. At the end of the day, however, it will be up to you to decide which is more appealing.