Those who continue to watch The Simpsons in recent years tend to agree: no matter how shaky some of the episodes can be, the Itchy and Scratchy segments remain undeniably funny. That portion of the show was initially intended to be an over-the-top reflection of the Warner Brothers and Tom and Jerry shorts that many of us watched as kids. Greek developer Monster Games LLC has taken this idea and ran with it. Based on what was playable at PAX, Apocalypse Cow looks to be the Itchy and Scratchy of indie games.

This co-op action/platformer initially looks very similar to Broforce, albeit with higher resolution graphics. While the devs admit to being fans of the title, Apocalypse Cow leans in a different direction. The destructible environments are out. In its place, there is a time slowing mechanic that must be utilized to pass certain platforming segments. Other puzzles involved causing large explosions. When brain teasers involve copious amounts of flying debris, I tend to be quite happy indeed. While the puzzles that were shown in the demo were simple, they were also designed to give the feeling of just barely making it out of harm’s way. These were tight and polished. 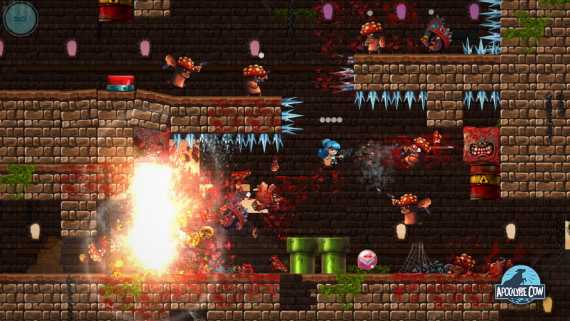 The action itself is pure sanguine silliness. Every enemy appears to have more pints of claret than the local Red Cross, and it will flow quite liberally. Using swords and firearms to cut a swath of carnage will leave splatters of the red stuff on the background. The feeling of wreaking carnage is palpable.

There is one honest worry to be addressed based on the demo. The controls were simply not set up well. While this is a PC game, the demo was played with a PS4 controller. Movement itself felt fine, and the mapping of the time mechanic to the left shoulder button worked, but pause was mapped to R2, attack to R1, and jump to the square button. During my time with the game, I accidentally paused the game numerous times, and failed to make jumps when needed. The developers themselves admitted that this was the first time that they tried using this type of controller with the game and the mapping options weren’t there yet. Hopefully, this will be properly resolved, as it can make or break the game. I choose to give them the benefit of the doubt. 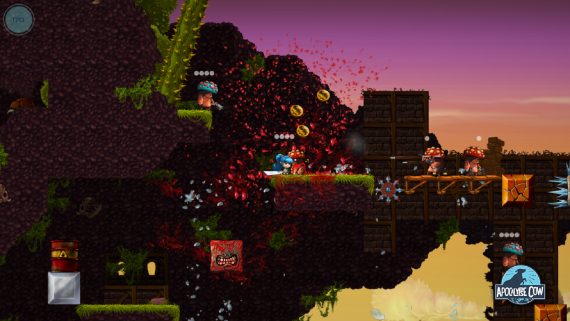 When the control issues are resolved, Apocalypse Cow will be a fantastic entry into the indie action/platformer genre. The humor, art style and mechanics are all present and accounted for. It was fun cutting down the adversary with co-op partner in tow, and I could easily see myself spending time with this one when it hits Steam.