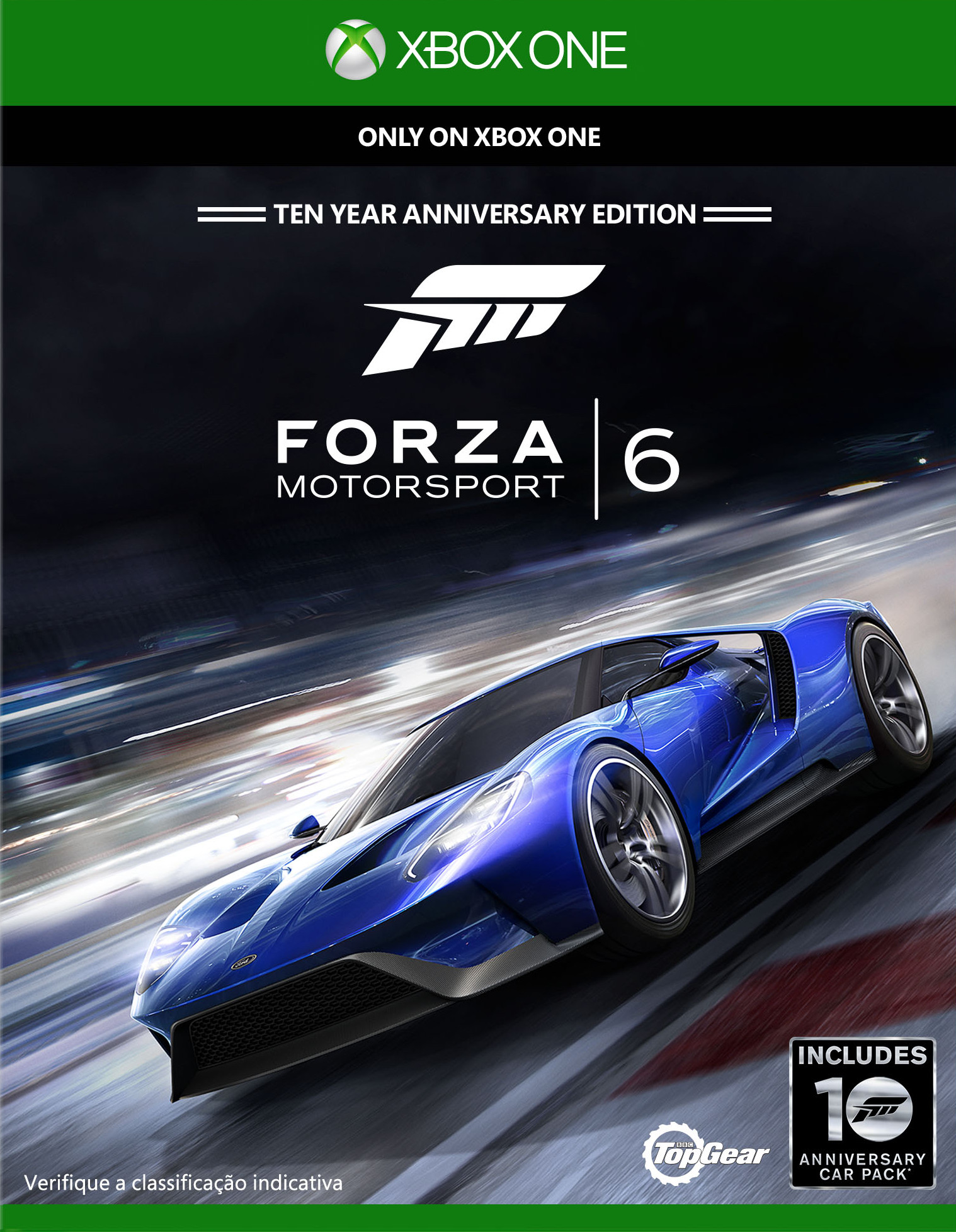 We’ll sit around and have all sorts of debates as to why Game X or Game Y is a transcendent experience, as if we’re checking another box on some running list of amazing titles. Over the past calendar year we’ve gotten some incredible entries in a number of iconic series, namely The Witcher 3, Metal Gear Solid V, Dragon Age: Inquisition, and yet when we think about who is absolutely killing it in terms of great releases, we often forget about what Turn 10 Studios has done with the Forza franchise. Year after year, Xbox owners have gotten fantastic simulation racing titles in the core Forza Motorsport series on top of two excellent open world experiences in Forza Horizon and Forza Horizon 2. It’s gotten to the point where, due to a lack of recent Gran Turismo happenings, the Forza franchise seems to have taken the console racing crown away from Sony and Polyphony Digital. Forza Motorsport 6, the latest entry in the core series, isn’t just another entry in a great franchise; it’s a title that should be stacked up against the best of the year in terms of sheer quality. A sensationally polished and optimized experience, Forza 6 is a racing fan’s dream with the potential to rake in new fans based on gameplay excellence alone.

By blending the rigid guidelines that come standard with simulation racing with the opportunity to allow players to recover from any of their mistakes, racing around the tracks in Forza 6 feels equal parts elegant and epic. If you’re a longtime fan of this particular franchise, you’ll be happy to learn that the great car feel of Forza Motorsport 5 hasn’t just been maintained, but improved. Yes, the Xbox One Forza entries have always included rumble trigger support and wonderful sound design, but there’s something about the way that Forza 6 balances sound and dynamic controller feedback to make gamers feel like they’re really zooming through the streets of Rio de Janeiro or Prague. By the time you get reacquainted with the basic mechanics, you’ll quickly find that the way that you brake, acellerate and turn is largely influenced by the sensations on your hands in addition to your vision and mind. This might seem like a great deal of mumbo jumbo, but once you hop behind the wheel, it’s evident that this is the type of dynamic experience that the Xbox One controller was built for. 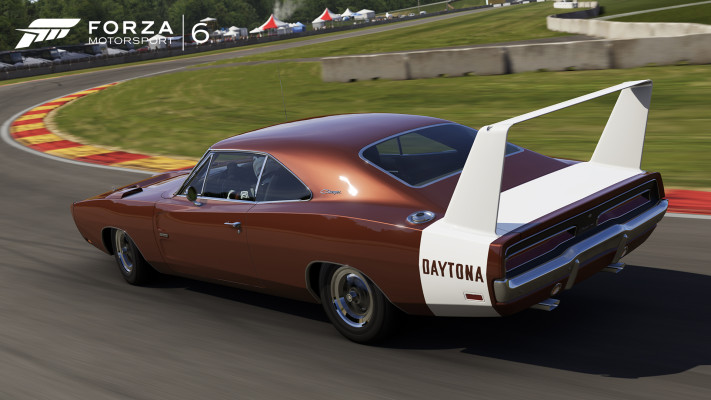 Forza Motorport 6‘s Career Mode is bolstered by the combination of an excellent track and car selection and one of the best progression systems we’ve seen in a racing game in quite some time. There’s a tangible history lesson tacking place throughout this choose-your-own adventure style campaign, as players have a brand-based Affinity Level in addition to their Credit and standard XP counters. If you find yourself racing with the same make of cars over and over again, you’ll not only get Credit and XP bonuses as your rank climbs, but you’ll likely see yourself learning about what makes a specific manufacturer different from another. There’s a dedicated Affinity Level for every manufacturer in Forza 6, so if you’re looking to 100% this seemingly endless title, good luck.

The Career Mode, titled Stories of Motorsport, is set up in a simple to understand manner, but it’s still as robust as one would hope for from a retail racing title. Players have the opportunity to race through five Volumes, each based around a certain general car theme (Super Street, Sport Icons, Grand Touring, Professional Racing and Ultimate Motorsport), with each Volume containing three series of four-plus races. There’s an insane amount of content to be had, but it’s so perfectly paced that the second you find yourself tiring of one particular car or region of tracks, Stories of Motorsport changes things up in a meaningful fashion. Combine this with the numerous showcases, which are essentially single-race activities loaded with fun challenges like racing Top Gear’s The Stig, and Forza 6 feels like it’s always throwing something fun your way. It might seem odd to talk about pacing in a mode that is completely comprised of racing against 23 other cars over and over again, but Turn 10 Studios has found a way to make Stories of Motorsport feel special. 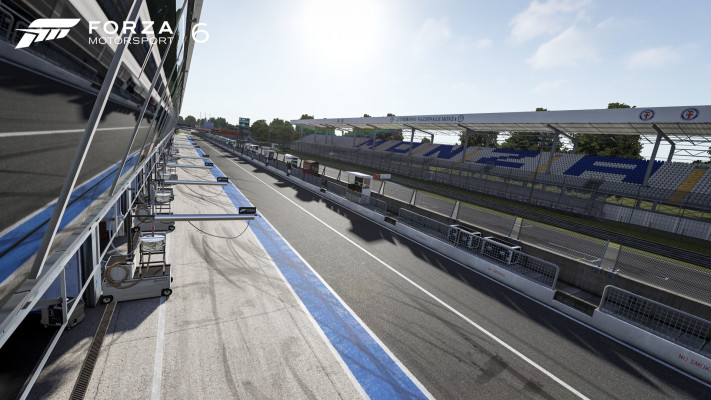 New to the Forza Motorsport series are the additions of night and wet-weather driving. These might seem like they would simply change the cosmetic effect of whatever track you’re driving on, but racing in these situation dramatically changes the way that every car feels. Races set under the night sky feature cooler tracks, which prevents everyone’s tires from warming up and gaining increased traction, meaning that there’s going to be quite a bit of slipping and sliding. The same idea goes for wet-weather conditions, but those include massive puddles that have the potential to send your car careening off of the track as a result of a sudden hydroplane. It’s during these types of races that the Xbox One controller’s Impact Triggers really make a difference, as suddenly braking or accelerating too quickly through a puddle or at night will almost certainly send you out of control. The sensitive, fluid movements that players need to have to excel in Forza Motorsport 6 are taught to players through these adverse conditions, which sets you up for future success. Oh, and the strict restrictions you see in games like DriveClub aren’t present here, so if you are slipping and sliding around a track with no regard to the safety of others, you simply have to live with the consequences rather than receiving punishment.

With over 450 cars and 25 tracks (including Nürburgring, which took a heft amount of time to be included in Forza Motorsport 5), Forza Motorsport 6 is definitely not short on content. What’s more, without looking through various menus on the home screen, you’re not going to find the in-game marketplace to buy new cars. That’s right, the progression and unlock systems that made Forza Motorsport 5 so controversial are completely absent; gone are the insanely low credit rewards that make obtaining cars all but a grind unless you fork over real-world cash. This is a robust, content-laden experience, and the idea that players are going to be able to have access to more than they could ever need right out of the box speaks to the lessons that Turn 10 and Microsoft Studios learned over the past couple of years. Forza 6 is gamer-friendly in every sense of the word, and if you think that there isn’t enough on the standard disk to satiate your simulation racing needs for the next calendar year, you’re sorely mistaken. 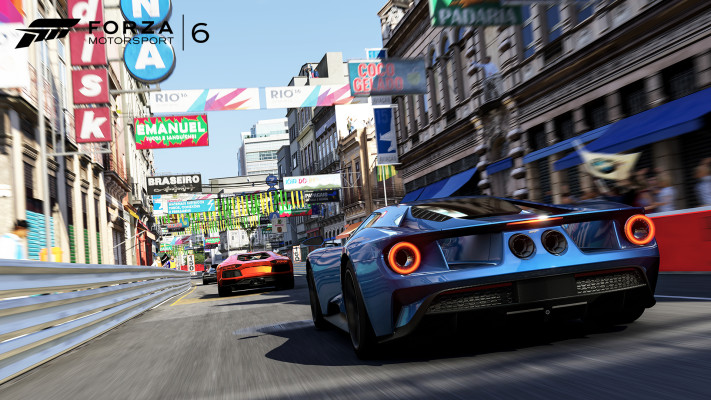 There are countless tools in Forza Motorsport 6 that allow you to make your racing experience as social as you desire. With Rivals leaderboards that let you hop in and out of races that the community has completed, a robust online matchmaking system loaded with possibilities and all of the design and photography tools you could dream of, Forza 6 is positioning itself to have one of the best online racing experiences found on a console. Barring some sort of monumental server collapse at some point during its lifespan (which, sadly, is always a possibility with network-connected titles this generation), it’s hard to envision the Forza community dying out before the release of the next core title. There’s something inherently awesome and primitive about trying to beat someone in a race, and thankfully Forza Motorsport 6 not only caters to competitive instincts, but seems to embrace them in a meaningful fashion.

Of course, this wouldn’t be a review of a new racing game without mention of how gorgeous it is. Obviously the Xbox One doesn’t have the power of a high-end gaming PC, so the visual fidelity isn’t quite at the level of a maxed-out Project CARS, but it’s hard to imagine games on Microsoft’s flagship console looking better than this. Throughout my time with Forza Motorsport 6, there have been only a couple of instances of minor texture pop-in, which is certainly impressive given the visual quality of this title as a whole. With dynamic lighting that seems to make every vehicle glow to the incredible dynamism in every on-track puzzle, this is the type of game that makes you wonder if near-perfect optimization will allow the Xbox One to shed at least a little bit of its under-powered reputation. Nowhere is Forza Motorsport 6‘s beauty more evident than on the Prague street track, which sends players flying across brick bridges, under stone awnings and around wonderfully detailed European streets. It’s hard to look at this track, which pound-for-pound might be one of the best simulation racing tracks you can find on a console today, and deny that Forza Motorsport 6 is drop-dead gorgeous. 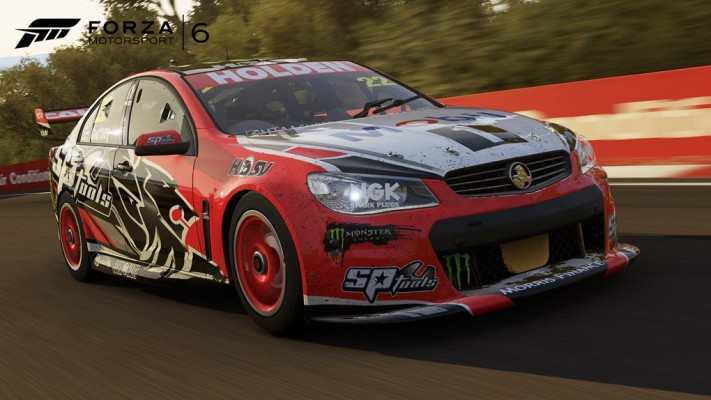 We’re getting to the point where denying the greatness of the Forza franchise is borderline ridiculous. The saddest part about Forza Motorsport 6 is that it will likely be brushed away by critics and gamers alike as a fantastic racing game rather than a fantastic game in general. Make no mistake, with all of its meaningful content and rock solid gameplay, Forza Motorsport 6 is one of the best games to come out in 2015, period. Whether you’re someone who has played every game in the series, or if you’re looking to jump into a simulation racer for the very first time, this is the game that you should gravitate to. Robust online functionality and a well-designed campaign make this a game that should have long legs and become the next entry into the “Games You Need to Own on Xbox One” list. Consider this: if Rise of the Tomb Raider and Halo 5: Guardians wind up being as good as Forza Motorsport 6, this actually will be the Fall with the best lineup in Xbox history.