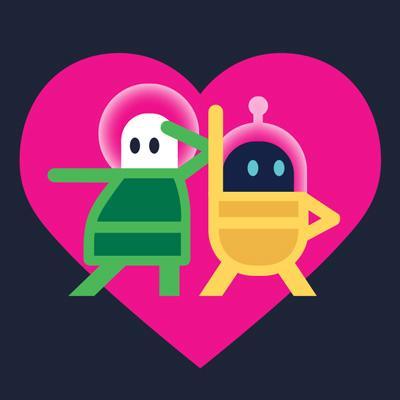 Lovers in a Dangerous Spacetime

Toronto-based developer Asteroid Base has seemingly accomplished the insane with their hysterically charming local-multiplayer title Lovers in a Dangerous Spacetime. By creating a game that subverts the very idea of what smooth gameplay entails and actually having everything work, this three-man team has turned what normally would be cumbersome into a work of elegance. Considering there are at least five or six things that you wish you could be doing at any given time, having the option to only do two makes for a hilarious back-and-forth between you and your trusty space companion. Combine this with procedurally-generated stages that never seem to compromise an eye-popping and unique art-style, and it’s hard not to lover everything that’s going on here. Sure, it could be a bit longer and playing on your own will never match the excitement of bossing a friend around while saving cute animals using a ridiculous circular spaceship, but all-in-all Lovers in a Dangerous Spacetime is the very definition of a good time.

Lovers in a Dangerous Spacetime is one of those games that’s nearly impossible to explain but immediately understandable as soon as you pick up a controller. Basically, players take control of one of two creatures inside of a giant circular ship loaded with different control panels. Each panel controls one element of the spacecraft, be it the engine, outer shield, different primary weapons and a special weapon known as a Yamato, with the catch being that a character can only control one of these elements at any given time. This creates a tangible sense of chaos at any given moment, as each player can only be in one place at a time. Every combat encounter involves balancing where you should position yourself, what action should be the highest priority and when you should give up the dream of killing everything and escape. There’s a real reason why Lovers in a Dangerous Spacetime doesn’t feature an online mode, as nice as that would be in a sense, as a real level of communication has to take place in order for these systems to work. 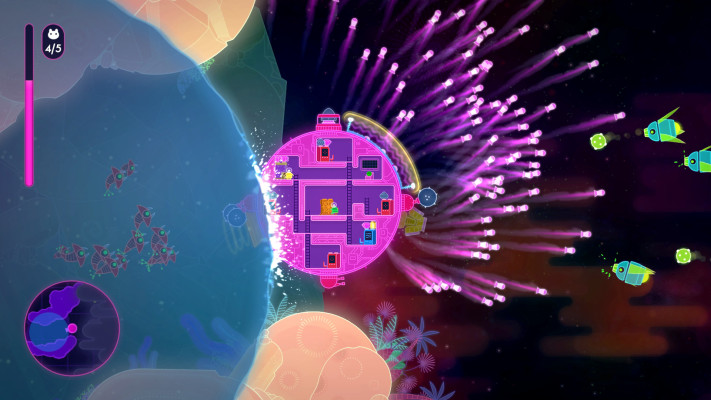 All of Lovers in a Dangerous Spacetime‘s gameplay takes place over four five-stage campaigns, each procedurally-generated in order to ensure a constant sense of discovery and add significant replay value to this five-hour experience. The story itself is complete nonsense, which is something that you would expect from a game in which you have to save five adorable creatures based off of Star Fox characters in each stage. You’re given the news that Anti-Love reactors have put the universe in jeopardy, and your job is essentially to destroy all of them and ensure that the appropriate level of Love is maintained throughout space. The thing is, although all of the readable dialogue that sporadically appears on the screen is adorable, you’re absolutely not coming to Lovers in a Dangerous Spacetime for the story. This is a title that succeeds as a result of a gameplay experience unlike anything else, and the inclusion of a simplistic progression system and the promise of awesome boss battles give you a bit more motivation to continue to experience the chaos that results from just about every interaction.

The fear with Lovers in a Dangerous Spacetime was always that it would seem like a cool thing to fool around with but not necessarily something that would be exciting over an extended period of time, and it’s an absolute joy to report that this couldn’t be farther from the truth. Understanding the abilities of all of the different enemies seeking to destroy you while battling different environmental hazards like high gravitational pulls, currents, collision damage and flaming stars makes for an experience where there’s always something new happening. Sure, in general you’re going to be doing the same thing as a result of the rhythm that results from understanding the various systems in place, but there’s never a moment where you’re going to feel like everything is going perfectly. Lovers in a Dangerous Spacetime features challenging gameplay not because of sheer enemy force, but because it’s based around gameplay elements that we’ve frankly never seen before. 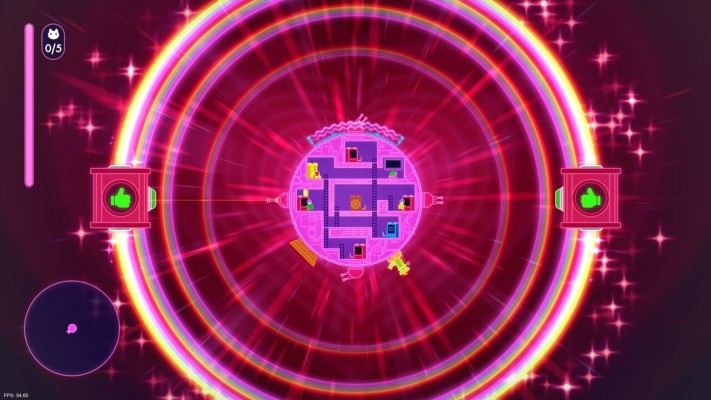 In general, you’re going to be spawned into a stage, search around for five creatures (be it bunnies, birds, foxes or frogs) while trying to stay alive at all costs. Cages of these animals will appear at various points in each large maps, and the opportunity to save one, two or three of these adorable friends is often sandwiched between some of Lovers in a Dangerous Spacetime‘s most chaotic engagements. Of course, you’re not just going to be saving your cuddly little friends all of the time, as there are numerous ship upgrades that can be found by exploring smoke-covered areas on every map. Each upgrade comes in the form of a gem inside of a present, and after you save enough friends and give yourself the opportunity to combine these upgrades, you start to develop a sense of experimentation. There’s a bit of Kirby to this upgrade combination system, as considering the various combinations of Metal, Beam and Power gems is key to developing the best ship you possibly can. From an engine that shoots out lethal metal mines to a giant metal ball that shoots out lasers in three directions, the weapons in Lovers in a Dangerous Spacetime are downright zany and feel unlike anything you’ve seen in a space shooter in recent years.

Every campaign ends in a boss engagement that requires some level of mastery of everything that you’ve learned throughout the course of the four stages before. Players have to use a combination of the right weapon upgrades, which can be altered in between certain levels (provided that you receive a wrench in the prize area pictured above), as well as tangible levels of patience and quick-thinking in order to defeat these Anti-Love-filled, constellation-based foes. Think about it: if you’re going to try to beat a giant bear that extends a massive paw to do huge damage or a sea serpent that casts giant waves that push you into damaging meteors, you’re going to need to know when the right time to run to the shield station is. The best engagements in Lovers in a Dangerous Spacetime, these boss fights find a way to tap into that intense feeling that results from risk-taking during an in-game fight and exploit it to create countless moments of pure gameplay bliss. 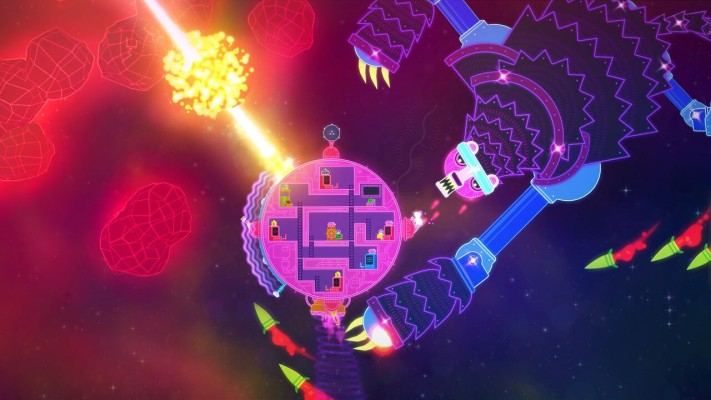 It’s worth noting that while Lovers in a Dangerous Spacetime is designed to be a local multiplayer experience, and more specifically a wonderful party game, everything can be consumed as a single player thanks to the inclusion of an awesome Space Dog or Space Cat. Instead of having a second player running around willy nilly, players direct their pet to whichever station they want by slowing down time with the Y button and then using the stick to pick a terminal. There is a certain challenge that comes from playing through levels alone, though the single-player experience is cheapened slightly by how effective parking your pet on the shield terminal is. Because Space Dog and Space Cat are unable to drive the spacecraft, you’re almost always going to use them to guard against enemy fire and environmental hazards. Sure, it’s still fun to take in Lovers in a Dangerous Spacetime, as its aesthetic is about as charming as it gets, but there’s also something to be said about experiencing a tangible level of ridiculousness with one of your best friends. 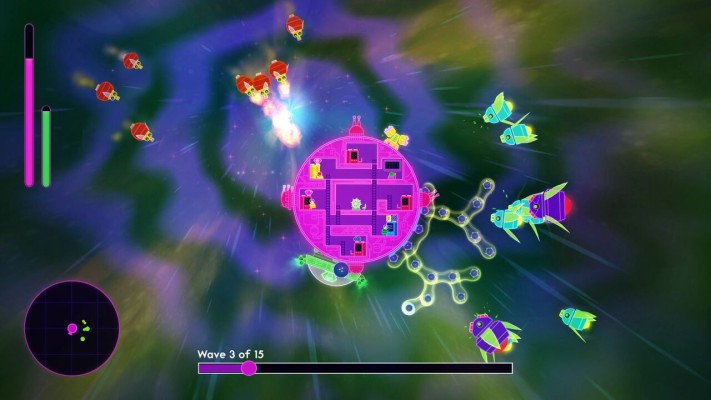 Both hardcore and novice gamers alike have likely found their match in Lovers in a Dangerous Spacetime. This is controlled chaos in a playable form, complete with all of the visual bliss that expected from a game with the silly title that it sports. Though the entirety of its four campaigns can be completed in four or five hours, there is a lot of replay value to be had by unlocking all of the various extra ships and augmentations by playing through procedurally-generated levels and finding every friend imaginable. What Asteroid Base has done here shouldn’t be brushed aside: this is a game that feels like some real effort and soul was put into it, and the result is a title that is emblematic of everything awesome about the independent game development scene.