The world of Pokémon is filled with an amazing array of creatures. Because of those characters there have been a multitude of successful games, movies, television shows, cards and toys. They’re all fun and friendly whether you’re watching or playing. We all know the unofficial mascot of the franchise is Pikachu, which no one item can outrun the grasp of the little yellow electric mouse. We happened to get a look at some of his latest toys coming to market.

First up is the Battle Moves Pikachu by TOMY, a large toy that comes to life in many ways. It’s basically a Pikachu that moves around and attacks like he came straight from the anime. It runs on batteries to power the motor, voice, sound effects, lights and tail flinging action. This Pikachu toy will appeal perfectly to younger fans of the brand. The design is cute and a bit unique seeing as there aren’t many figures or even illustrations of Pikachu diving into battle. Colors are bright and noticeable with the buttons placed cleverly along the stripes of Pikachu’s back. With Pikachu able to fling projectiles, this was obviously made for kids to enjoy the toy — and they undoubtedly will. 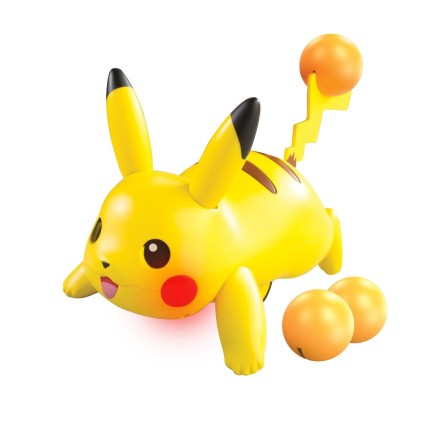 Since it’s not really meant to be enjoyed by older fans, however, let me warn you a bit about some of its functions, especially if you’re planning to purchase Battle Moves Pikachu as a gift. The toy is extremely loud, like, annoyingly so. It makes some sound effects and Pikachu says something, but it’s not fun to hear. Plus, Pikachu will literally launch an Electro Ball attack. If you don’t want to hear hard plastic bouncing around the house then keep this away from your kids. It was already bad enough with its volume, but adding the launching function just destroys your ear drums. Then, there’s a matter of price. It’ll cost you a whopping $40.00 just for this plastic Pikachu. If you think your child is worth it then go for it, but that is a bit on the steep side.

The other Pokémon battle toy I got to look at was Ash’s Arena Challenge. It stars Ash, Pikachu and Wobbuffet duking it out on a platform. The battle stage has a few buttons on it and when pressed make different sound effects and music. It’ll also light up to make each of Pikachu’s attacks seem more realistic. Whichever Pokémon is in the middle will blast off like Team Rocket. This is a nice battling platform to have. A lot of figures kids play with don’t have enough locations for their toys to fight on. That’s one of the best reasons to have this arena set; it’ll give other Pokémon a place to test their skills. Many other TOMY figures are compatible with Ash’s Arena Challenge giving it a huge plus. 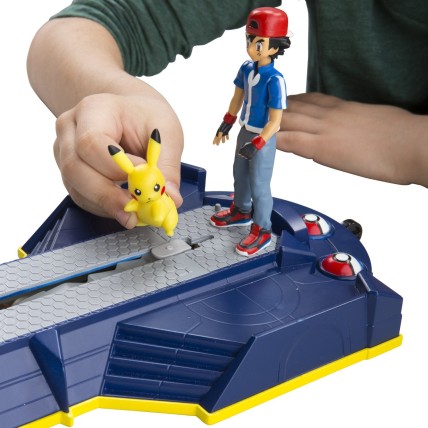 So far so good, but taking a look at the Pikachu it comes with will make any fan immediately want to launch it across the room instead. We all know it’s the unofficial mascot of the brand, but it’s seriously so ugly it makes one wonder why they allowed this to be produced. Yeah, the kids probably won’t care, but Nintendo, Pokémon and TOMY all should have more respect for the franchise. Pikachu has gone through plenty of makeovers through the years, but this toy is more of a rabbit-kangaroo hybrid than a Pikachu. It does happen to be the most articulated Pikachu figure to date, but it all means nothing if it looks nothing like one. Besides that little issue, there’s not much to complain about. Again, the pricing for this is more than it’s worth. Dropping the total by maybe ten bucks would be a better sell, I feel like if a parent sees this on the store shelves, they’ll pass it up on that amount.

Overall, both toys are good. With a bit of fine-tuning, they’d be great. If you’ve got the bucks to spend on a Pokémon gift, these could be some nice choices, but there are a lot of cooler options out there. For kids these are great, for older fans and collectors, they aren’t really worth it. They’ll bring fun and joy to lots of younger audiences, though, and I suppose that’s what really matters.