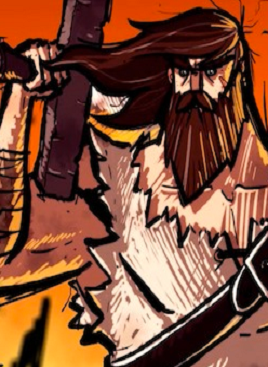 Cross of the Dutchman

Entertainers who achieved fame and popularity from hard work and honing their craft tend to have a collection of older works that show flashes of brilliance, even if they aren’t sterling examples of the form. To use Nirvana as an example, before they hit fame with Nevermind, they produced Bleach. This debut studio album showed some incredible talent and was interesting, but it was a stepping stone, a reference point that the band used to improve. Well, Cross of the Dutchman is Triangle Studio’s Bleach.

Cross of the Dutchman is the story of an actual person, European folk legend Pier Gerlofs Donia. Also known as “Pier the Great” and “Oh, Please God, Don’t Hurt Me,” he was a mountain of a man. The stories say that he stood stood seven feet tall, would pull the plough himself instead of using animals when farming, and could lift men and crush their skulls against each other. Obviously, he beat Austrian Death Machine to the punch in inventing 25 Hour Fitness. (“With an extra hour just for working out!”) While he is not commonly known in the Americas, his tale is absolutely fit for an action game.

This game is actually his origin story. It starts with him as a simple farmer living in Frisia. He soon finds himself, as well as nearby villages, being harassed by a decidedly unsexy Saxon occupying force. Starting small, the tale is one of escalating events, one where Pier would take an action, and the Saxons would retaliate in kind, until a rebel army is raised and things get out of control. The story itself feels intimate. Though Pier is presented here as a larger than life fable, there is a still a human element to his motivations and his story all the way up to the abrupt close.

As one might assume from the emphasis on his stature, this is primarily an action game. Taking place from an isometric, overhead perspective, one could be forgiven for mistaking it for something similar to Diablo. This is not really the case. There are only four stat upgrades to be purchased, two for health and two for stamina, and a handful of special moves to earn. There isn’t a loot system, either. For the first half of the game, it is about using fisticuffs until the sword and armor is earned. Pier’s attacks have a slower, meatier feel to them. His movements have a certain heft to them. This can lead to frustrating portions during some of the melees that occur. 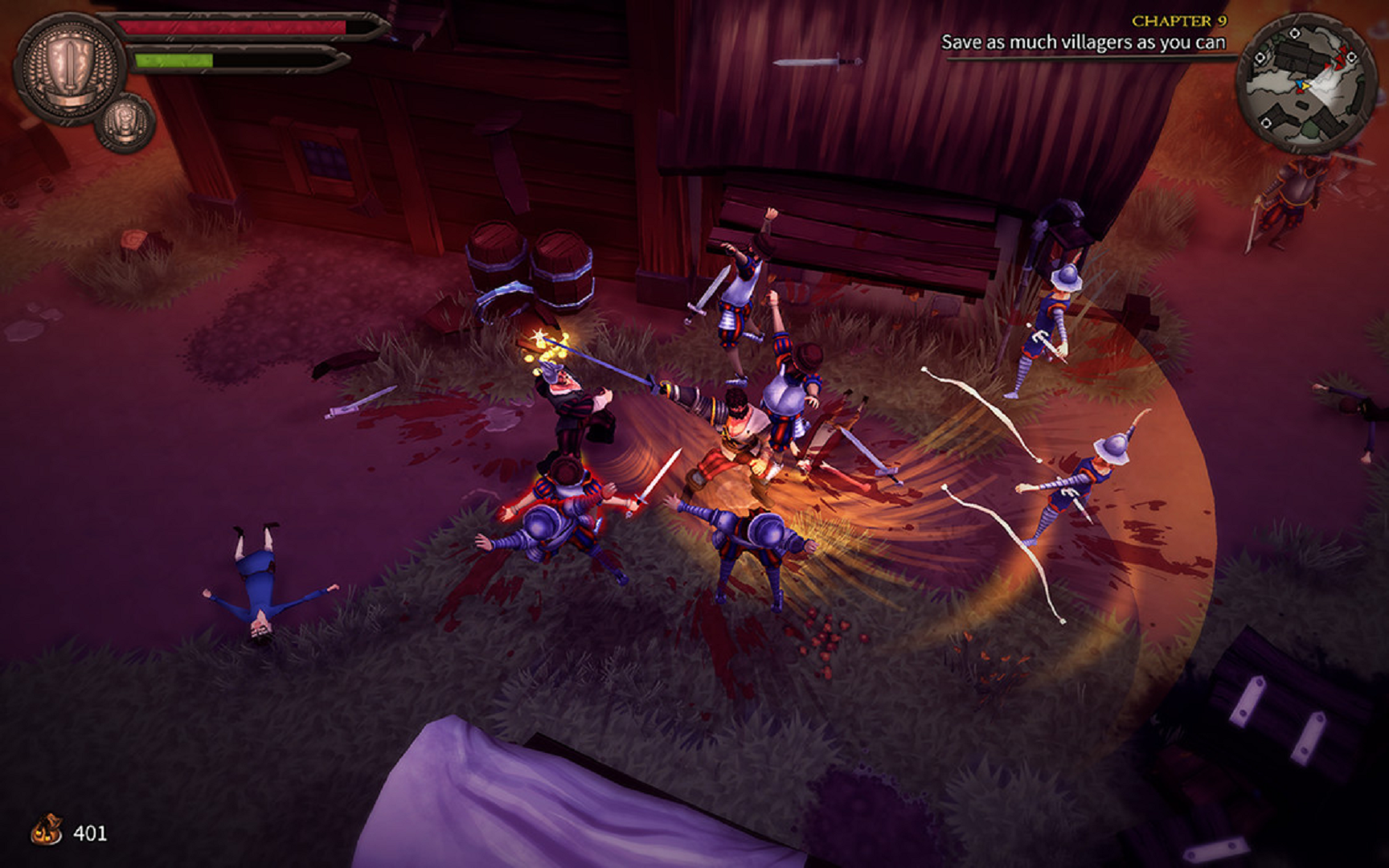 For example, there is a set piece where Pier and a local compatriot needed to defend a mill from being burned down by the Saxons. The enemy count here is rather high. The battle quickly devolves into using a special attack to take out a couple of foes while their friends hack large and rather important seeming chunks from Pier. After the attack lands, it is prudent to run away, allowing the health bar time to regenerate. It really does take on the appearance of a 16th century era Benny Hill sketch. Fortunately, this becomes more manageable as gold is earned, allowing purchase of the previously mentioned upgrades. With expanded health and stamina, the game becomes an exciting brawler, where the hero knocks foes through the air at a rate of four (or more) at a time.

There are also forced stealth sections that prove more aggravating than fun. In these, he must sneak past a series of Saxons whose area of sight makes the vision-coned soldiers in the older Metal Gear Solid games seem like observational savants. Since the paths that must be navigated can be narrow, it does seem like the logical way to get these sections to work. They may even be part of the actual Pier’s tale. In game, though, the logic is baffling. The protagonist just went from murdering two dozen armored soldiers with his bare hands. Why does getting caught by one unarmored patrolman lead to an instant arrest?

One final thing that should be addressed: the game’s length. A full play through is just shy of two and a half hours, leaving it an exceedingly short experience. The biggest kick in the click-clacks is that right when the game is getting really interesting, it ends. Not only does it end abruptly, it ends on an event that can be predicted from the very first scene. Triangle had better be planning a sequel, and quickly, or they might have to deal with a small riot. 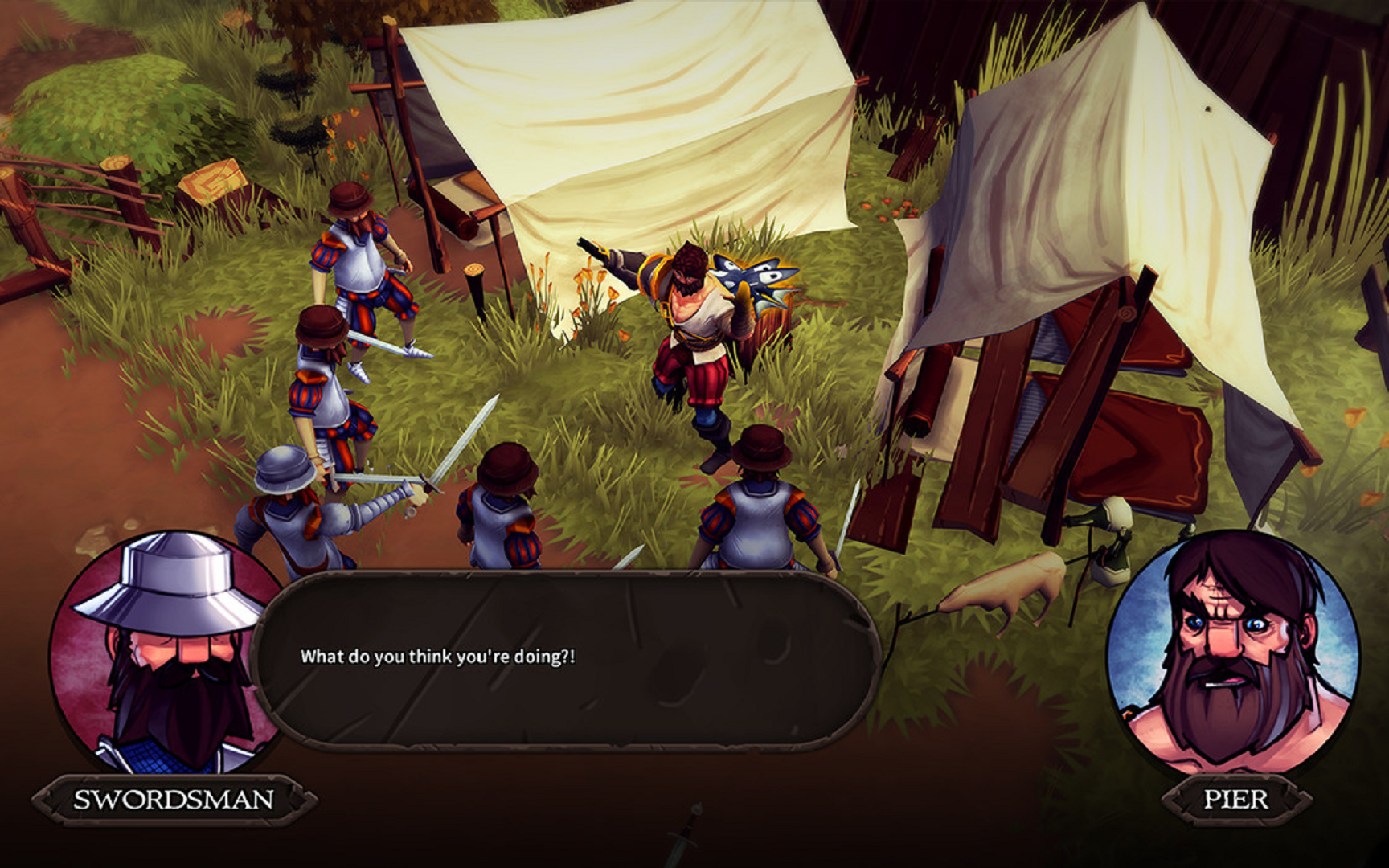 For all of the faults that can be pointed out, there is a great game here. The combat starts flawed, but becomes rewarding. The stealth sections were annoying, but contrasts well with the combat and highlights it more. The story isn’t handled in the best way, but leaves the player wanting more. Triangle Studio hasn’t gotten to the raw tone mixed with the high quality of In Utero yet, but the promise shown here does more than hint that they will. This is Pier’s humble origin story. And while they have already made It Came From Space, and Ate Our Brians, this is also Triangle’s.