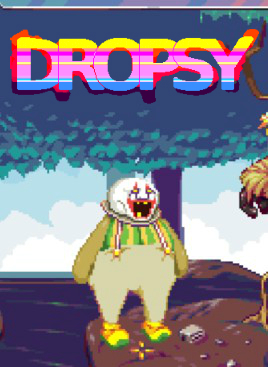 Point and click adventure games have been around for a long time. Such a long spanning genre has seen all types of settings and protagonists. As best as I can tell, however, none has never starred a clown before. If they have, they’ve avoided a depiction anything like Dropsy the clown. Our odd pal doesn’t fit into any sort of expected framework; although not evil, he looks a bit diabolical at first glance. The massive red-lipped smile painted against a pure white head is creepy. So too are his strange undulations and apparent lack of fingers. With all that said, after minutes of playing you realize that, despite these looks, all Dropsy wants is to bring joy to everyone.

Players get to control this joy-giving first hand by simply walking up to people (or inanimate objects as the case may be) and giving them a hug. Seriously, there’s a hug button! Unfortunately for Dropsy, the world isn’t as happy a place as he hopes it to be. Most city dwellers want nothing to do with this clown or his moist hugs. They’d rather stew in their depressed, agitated states. Why? Well, some of it has to do with the story setup. You see, at the very beginning it’s revealed that Dropsy was once a successful circus performer before the whole tent was accidentally set on fire. Many believe that poor Drospy was behind the whole thing which soured their opinion. In a sense, the tale of this game isn’t just about spreading joy but also about removing that stigma.

Aside from the whole child-like, slightly grotesque clown angle, Dropsy also stands out from other adventure titles in other key ways. The most apparent from the get go are the excellent visuals. Pixel art is so common with today’s indie games that it is often to devise a style which will thrill players. This title manages to make a statement because of how it meshes bright, happy colors with a less excitable reality. Although there are many outlandish moments, a lot of the world is grounded in reality. There’s a small church, graveyard and apartments which are hardly fantasy locales. Seeing them depicted through a more cartoony, colorful lens is refreshing. The visuals may just be at their peak during Dropsy’s nightmares, but those aren’t a huge chunk of the game. 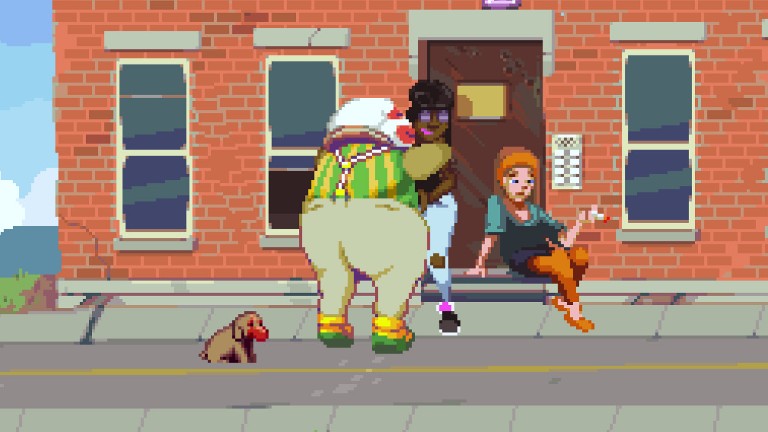 Of course, even the best art style in the world can’t make a video game great. You’ve got to have something else to keep players going. At its core, Dropsy is still definitely in the vein of classic point and click adventures. As you explore the world, characters will reveal their tasks to you and you’ll set off to solve them. Eventually new areas open up, you complete even more puzzles, and rinse and repeat until the credits roll. There are multiple design distinctions which change up even this most fundamental element, however. For one, you could classify this as an open world adventure game. Dropsy’s surroundings are absolutely massive. It’s easy enough to get lost and annoying to walk between spread out areas. You do gain the ability to fast travel later on, thankfully, but it would have been a huge boon from the get go.

Unfortunately, issues which have long plagued the genre are present here as well. There are dozens of puzzles to solve for townsfolk. Although not all are required to progress the storyline, you’re likely going to end up doing them as you wander upon items. Various objects litter the world, practically on every screen. When not everything is integral to the main path, it becomes harder to know what is needed where and when. 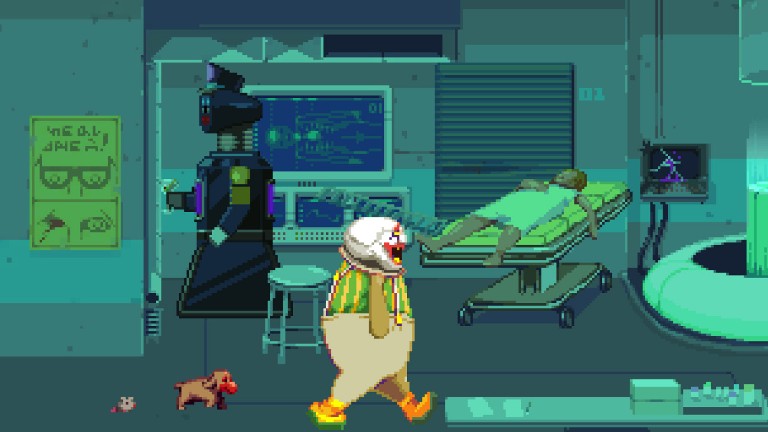 A few puzzles related to the main story were also a bit iffy in regards to logic. The worst thing, as is common with adventure titles, is the strain caused when you actually miss a needed item. Nobody enjoys hovering a mouse over every screen twice to try and discover the lost item.

Then there’s the matter of Dropsy’s system for conveying missions and conversation. Instead of speaking English, or any language, everyone speaks in images. Simple symbols appear in text boxes and players must determine what they mean. Most of the time it’s simple to know what’s needed, but every so often the images seem to be trying to convey far too much in one image. The whole concept is awesome, it’s just that the implementation is not perfect. One thing worth noting is that understanding of this form of dialogue seems to become easier the longer you’re immersed in the world of Dropsy. The storyline makes sense from beginning to end without ever uttering a word. Some might find the abrupt end a bit of a let down, though. 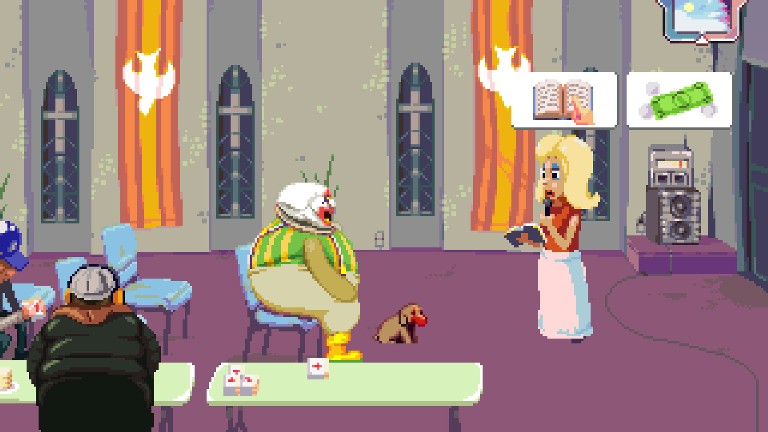 There is a tremendous amount to love about Dropsy (both the game and oddball protagonist). Beyond the positive gameplay focus of bringing joy to everyone around you, the visuals, characters and variety of landscapes provide one heck of an experience. When it comes to the main issues, they’re much the same as what many other titles in the genre are still trying to work out. The choice of using images over text yields issues from time to time which are wholly unique to this game. Longtime adventure fans should have little to no trouble decoding pictorial dialogue and should already be accustomed to carefully scanning each and every scene for objects, it’s just a shame that these caveats still persist in even in a modern point and click title with as much promise as Dropsy.