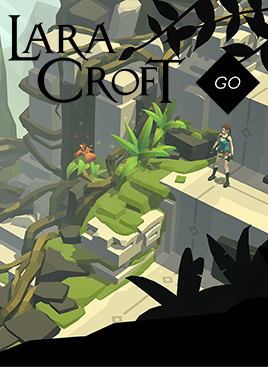 Lara Croft has gone through a lot over the years.  From her genre-defining PS1 adventure to the less stilted and blocky modern iterations, and even the spin-off co-op adventures, Lara’s games have had the occasional new and surprising evolution over the years.  The newest offshoot takes the series in an all-new direction with a turn-based adventure, with its gameplay given its first outing in Hitman GO.  Now Lara Croft GO sees a fresh coat of Tomb Raider paint applied to the previous game (or possibly a coat of GO paint to the Tomb Raider series) and as it turns out, it fits her adventures perfectly.

Lara Croft GO is a turn-based adventure set to a movement grid, kind of like a board game.  Each move is from one diamond icon to another along a preset path, with a single finger-swipe all that’s needed to send Lara on her way.  The earliest levels are simple movement puzzles, teaching the basics of cause and effect.  Flip a switch to move a path, Lara moves first so don’t jump on a sawblade with the assumption that it will be gone by the time you get there, even though you move first it’s still going to change position so don’t jump on the space that sawblade is going to be, etc.  Even the ancient urns hidden around the level are fairly obvious, and touching them (no matter how far away Lara may be) earns either a gem or a relic fragment.  Then snakes show up and things start getting tricky.

Snakes are the first of three animals with different movement patterns.  Snakes stay still and, like all animals, only react to Lara when she’s in their line of sight.  Step in front of a snake and it will take Lara out, necessitating a level restart, but walk onto its space from behind or beside it and Lara shoots the critter right off the board.  Giant spiders, on the other hand, walk back and forth in set routes, and giant lizards track Lara once they’ve seen her.  The key to survival, though, isn’t to kill everything but to figure out the best way to use it. 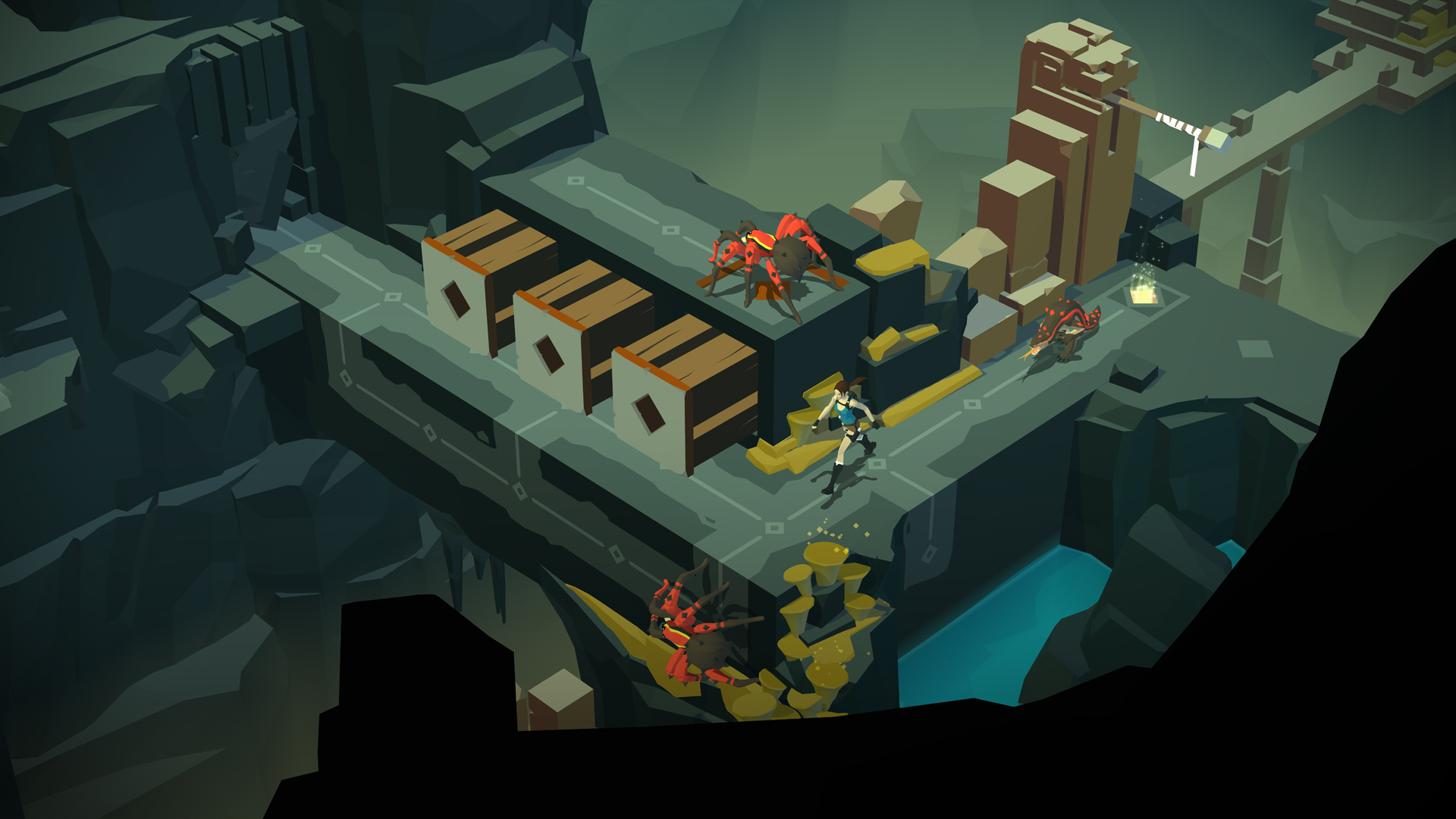 A wandering spider will trigger a pressure plate every few moves, meaning that if you can figure out how to position it right and time Lara’s movement to the tile being activated she can move forward.  Lizards are a little harder to manipulate, but the levels are designed so that, with careful timing, it will walk over the plate just in time to lower a platform just as Lara is in front of it, then her next movement sees the lizard step off the plate as it tracks her, raising the platform back to where it came from.  It’s pretty simple on paper, but when you’ve got multiple critters and traps to contend with, plus sliding columns that can act as plate triggers, extra steps in a path, or simply obstacles to to forward movement, it takes planning several moves ahead to take a single useful step.  Weakened sections of the track crumble and break if used more than once, pressure plates shoot out deadly arrows, and of course there’s a giant snake stalking the depths of the temple.  This particular tomb requires a lot more thought than Lara’s normal fare.

The surprising thing about this is how well the Tomb Raider series translates to this type of gameplay.  The paths of the level cross all manner of obstacles that are straight from Lara’s normal adventures, and her moves may progress one turn at a time but they’re instantly recognizable.  Hopping down a cliff or climbing up it, doing the rare handstand at the top, pulling out her twin pistols to shoot down a snake, and everything but jumping is present on the game board.  It feels exactly like Tomb Raiders should, except turn-based and more puzzle-y.

About the only complaint that can be leveled against the game is that there’s not a bit of replay value in it.  Once you’ve beaten each level and found all the hidden urns, there’s nothing left to do.  This makes the addition of microtransactions where you can buy puzzle solutions extra bizarre, because why would anyone want to take a game that’s easily beaten (100% complete with all secrets found) in a week of light play and lessen that?  Another small nitpick would be with the hidden object rewards, which are costumes.  The relic costumes are nice enough, if you want to dress Lara up, but the gems you also find thoughout the levels open up one final outfit that, frankly, makes you wonder why you bothered.  The only thing the gems earn is that one outfit, you need to get every single one in all the levels of the game to earn it, and it’s only a little better a reward than a black screen with “thanks for playing” in the middle.  Thankfully, the hide & seek of finding the urns is actually pretty fun, so the final payoff for the effort being useless doesn’t hurt too badly. 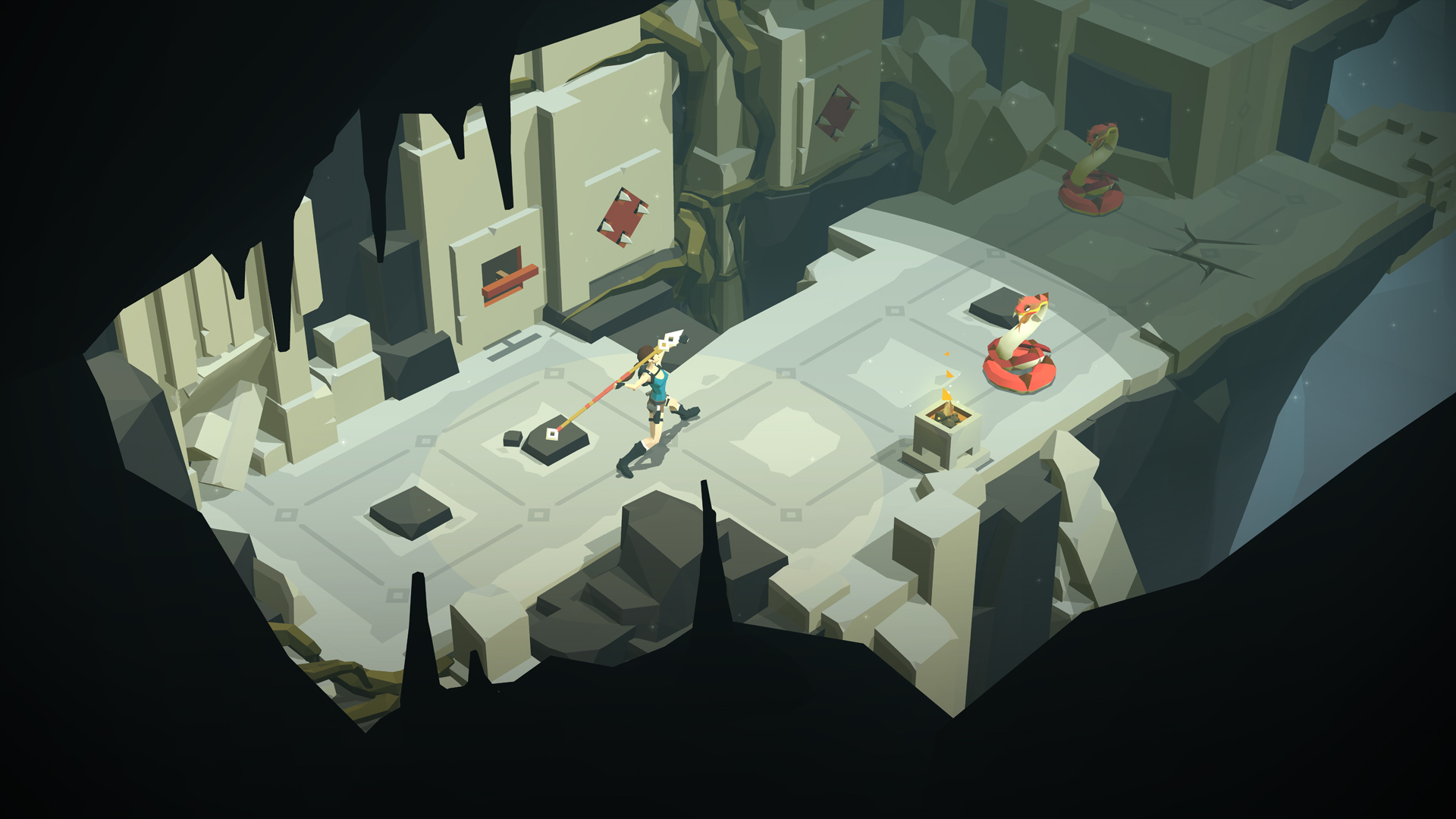 Lara Croft GO reimagines Tomb Raider in a way that makes perfect sense when you think about it.  Tomb Raider was always as much about the puzzles as the shooting, at least in its early days, so switching the focus to them works nicely.  Advancing isn’t simply about killing the critter in the way, it’s about using the threat as a tool.  Not every move is equally dangerous, of course, but when you’ve got a lizard behind you and a sawblade in front, it’s probably best to think really carefully about where you’re sending Lara next.  Lara Croft GO is a great adventure-puzzler, filled with clever problems that require either a nice amount of thought or a lot of trial and error, and usually end up with a good combination of both being used before finally earning a victory.