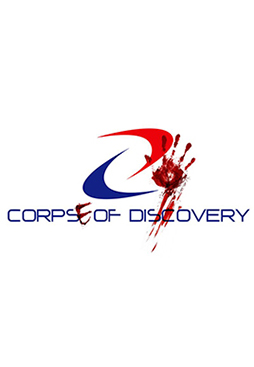 There are quite a few games out there coined “walking simulators” nowadays. Whether or not such games are of interest to you is a personal preference. They often times offer an exploration of places you could never go or see, or a narrative on life. Corpse of Discovery appears on the surface to be a game about exploring other worlds, but it will quickly teach you to always look a little deeper.

You awaken in your bed in an outpost on a distant world. As a member of the Corps of Discovery, it’s your job to take a look in advance of any other team arriving. You quickly, however, discover things just aren’t quite right, though you can’t put your finger on what’s off exactly. Everything needed to survive is found exploring the base: food, water and cat videos. Plus some things you don’t need, like a Hologram projector that takes up a ridiculous amount of space to simply display a static picture while listening to messages from home. Why this projector needed to be a separate piece of equipment from the one that shows a picture of the planet, will remain a mystery.

After exploring your ship and looking at this and that, while reading your person’s thoughts on each on the screen, you’ll eventually make your way to the heart of the base. Here you’ll get a popup hologram of the planet you’re about to explore, as well as information on your mission. Everyone is quite upbeat and can’t wait to get you home after you successfully complete your mission. You’ll make your way to the airlock and head out.

You’re met with a planet that looks quite a bit like Mars, but is plagued by nasty dust tornadoes that are more than happy to pick you up off the ground and fling you high into the sky for a good, lethal dose of radiation. You’re given a trusty and utterly annoying companion called AVA who couldn’t stop talking even if it meant saving her batteries. She throws up handy markers to help you on the way to your goal, in this case that goal being to put some beacons down so you can get off this rock. 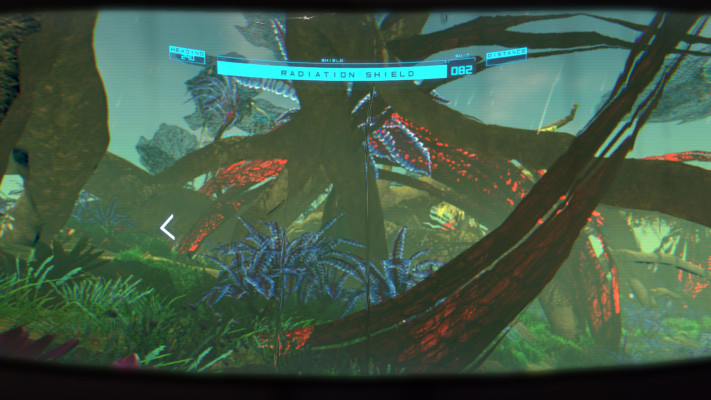 And in one fell swoop you are introduced to all the mechanics you’ll need, because despite changing environments or even goals, you’ll be doing the exact same thing for the next several hours. Corpse of Discovery becomes less of a walking simulator and more of a hop, skip and jump-ulator. Nearly every environment is filled with impossibly floating islands, which will make getting to your destination take ten times longer as you attempt to figure out the best way to climb to your marker.

After you complete all six markers, your character passes out and re-awakens back in bed. And then the day repeats, on what seems to be a bad joke version of Groundhog Day. You’ll have a new message from your family, new pointless videos to watch on your laptop, the base slowly falls into disrepair, and despite still being on the exact same planet, the planet itself completely changes. You get your briefing, same as before, somehow this apparently being the first day on the planet again, and you get new mission parameters. But that still just means picking up AVA and going to six different checkpoints. Be it discovering lifeforms, checking distress signals or picking up ship parts, it’s the same thing over and over. Go to the marker and repeat. In your way are floating creatures with a lighthouse like beam coming from their heads attempting to see you and send you back to your last checkpoint. 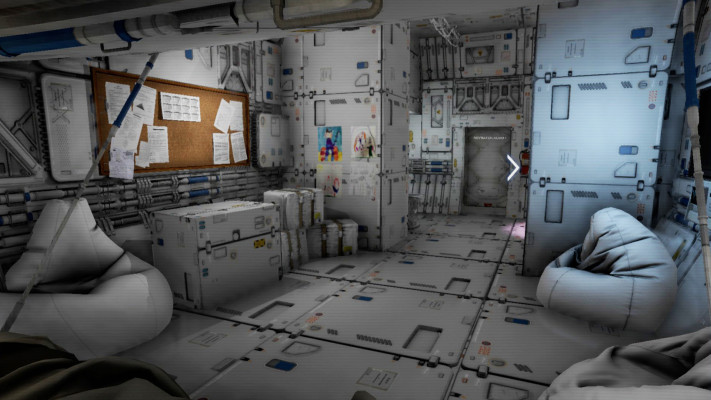 This recipe continues for several planets, all different looking. Eventually you get a jet-pack (rechargeable), which is nice, but they increase the distances and make the platforms even harder to reach to adjust for your higher “jumping” ability. It’s not awful and it can be fun to see the differing environments, even if they appear to be poorly put together. You’ll see tons of floating environmental assets like grass, which can make it difficult to actually judge where the edge of a platform really is.

As soon as you think that’s all there is to Corpse of Discovery, it throws you for a loop and gets weird. Really, really weird. Suddenly there are unicorns and talking teddy bears from your childhood, it’s almost as if even the creators of the game have no idea where they were going with it. So instead of answering any of your burning questions, they just turn the whole thing on its head, have rocks and trees talk to you while your teddy bear asks Death to help him make a wormhole for you to go home to your family. 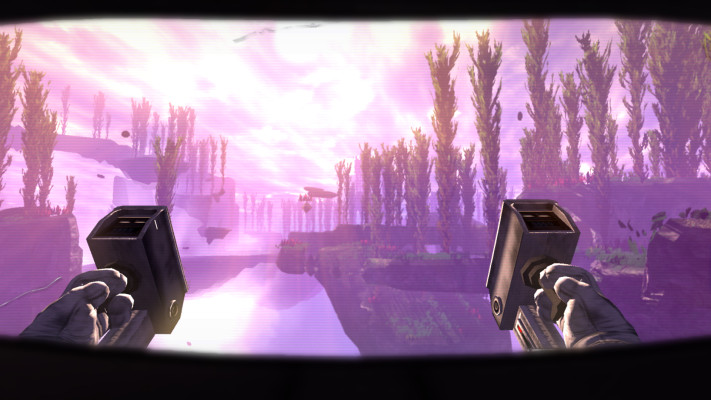 Corpse of Discovery had promise, but a not-so-great execution. It could use a good coating of polish. The developers chose to add scanlines which cannot be turned off and quickly become sore on the eyes. While you’re in the base, you have a full screen of vision, but as soon as you put your spacesuit on and step outside, the helmet obscures half your screen for the most visually interesting part of the game. The music, while nice, quickly gets repetitive. Most obnoxious of all is the constant sound of your character breathing, or if damaged, the constant sound of wheezing.