Speaking with 17-Bit CEO and creative director Jake Kazdal, it’s difficult not to admire his passion. Creators often become animated when they’re proud of their creations, but Jake speaks with the frenzied excitement of a man making lifelong dreams into realities, overcome by  the incredible potential of his brain-child and the overwhelmingly positive response it’s been met with. Galak-Z is absolutely deserving of every bit of praise that’s been tossed its way, but Jake and his team aren’t resting on their laurels. With the game already on PS4 and a PC launch imminent, they’ve also unveiled plans for a mobile version, published by Gung-Ho Online Entertainment,  titled Galak-Z: Variant Mobile. It’s a bold, unexpected and unconventional move, but, true to form, all signs point towards an emphatic and inspired mobile iteration.

It won’t be a straightforward port, though. 17-Bit has plans for changes big and small, from the fundamental structure of the game to the color of the logo. “I don’t think a ten or fifteen minute level is a good fit for a mobile device,” Jake explains. “The full game is a very hardcore, demanding roguelike, and I don’t think that’s the perfect fit for a mobile audience. I think we need to make this into something more arcade-y, more lighthearted; not something nearly as brutally demanding.” From the sound of things, Galak-Z could be in for a substantial shake-up during its transition to mobile, but Jake assures me fans will still find the game’s soul intact. “I would expect the structure to be substantially different, while retaining the core experience. Combat is gonna be fun for everybody, and the controls are tight, and that’s the most important thing”. 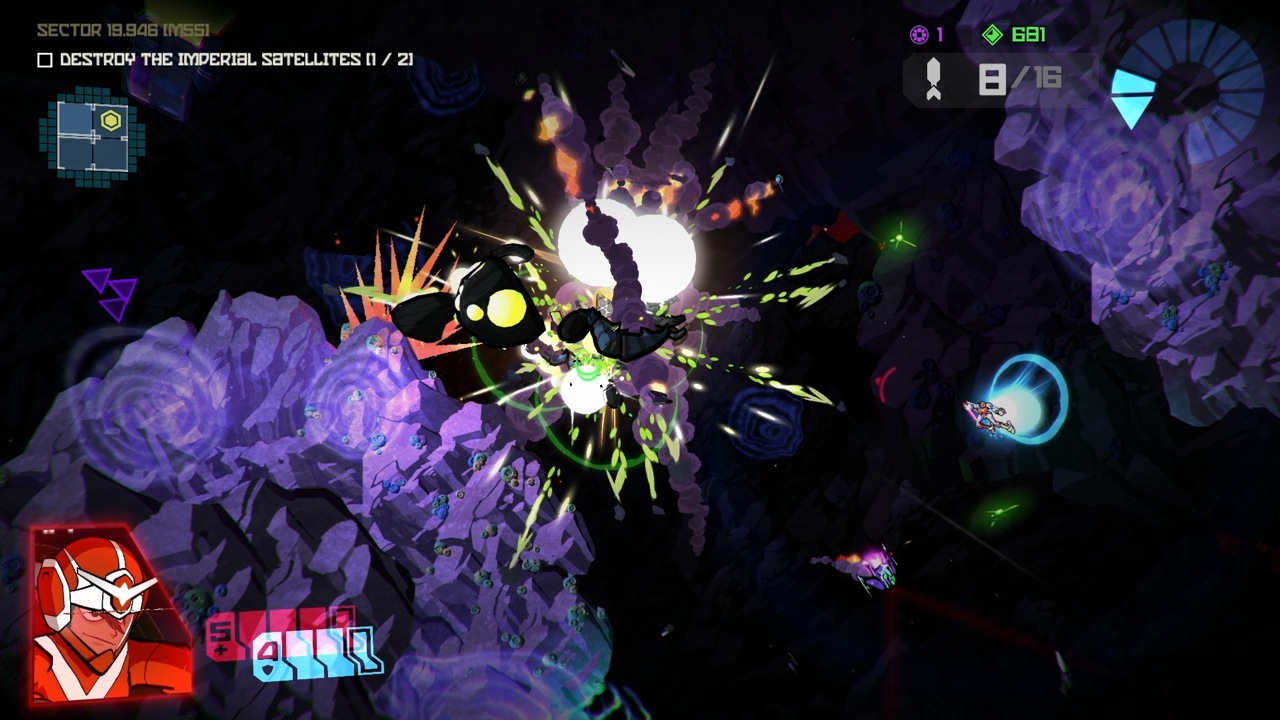 I’ll be the first to admit I had my doubts about Galak-Z‘s ability to translate its addictive allure to mobile. It seemed to me like a game that required a little too much finesse for a touch screen, but the wizards at 17-Bit have proved me wrong. Variant Mobile controls incredibly well, relying on three main buttons in Move, Boost and Shoot to lead the experience. Because the more advanced controls are layered in — you can play from the start with just the big three — players can slowly integrate more advanced techniques at their leisure, like double tapping Boost for jukes or swiping down on Boost and then sliding over to Shoot to reverse thrust and shoot at once. It feels intuitive and acutely responsive, and while it will never control quite as well as its console counterpart, Galak-Z: Variant Mobile is already looking like one of the most robust and refined experiences on the mobile marketplace.

Watching it in action, it’s astounding how well the game has handled the move to mobile. After 17-Bit delayed the Vita version of Galak-Z indefinitely, citing technical limitations, I was convinced it would only ever be a game I played in the solitude of my living room.”A lot of people were upset to see the Vita version wasn’t gonna make it — at least not right now — and they were like ‘How the hell are you gonna do this on a mobile device?’. Well, mobile devices are actually pretty powerful these days. And you know, it feels great, because I’m not a huge action game fan on mobile; for the most part I don’t think it works as well as the pad, but this game inherently, because of the floaty nature of it, is more about your tactics and timing. We actually pulled it off. Everyone I’ve given this demo to is like ‘Wow, I can’t believe you guys made this feel this good. It doesn’t’ make sense.’ I’m playing it all the time, and I’m like ‘This is good'”. Playing it on Jake’s phone as he speaks, I can’t help but agree. 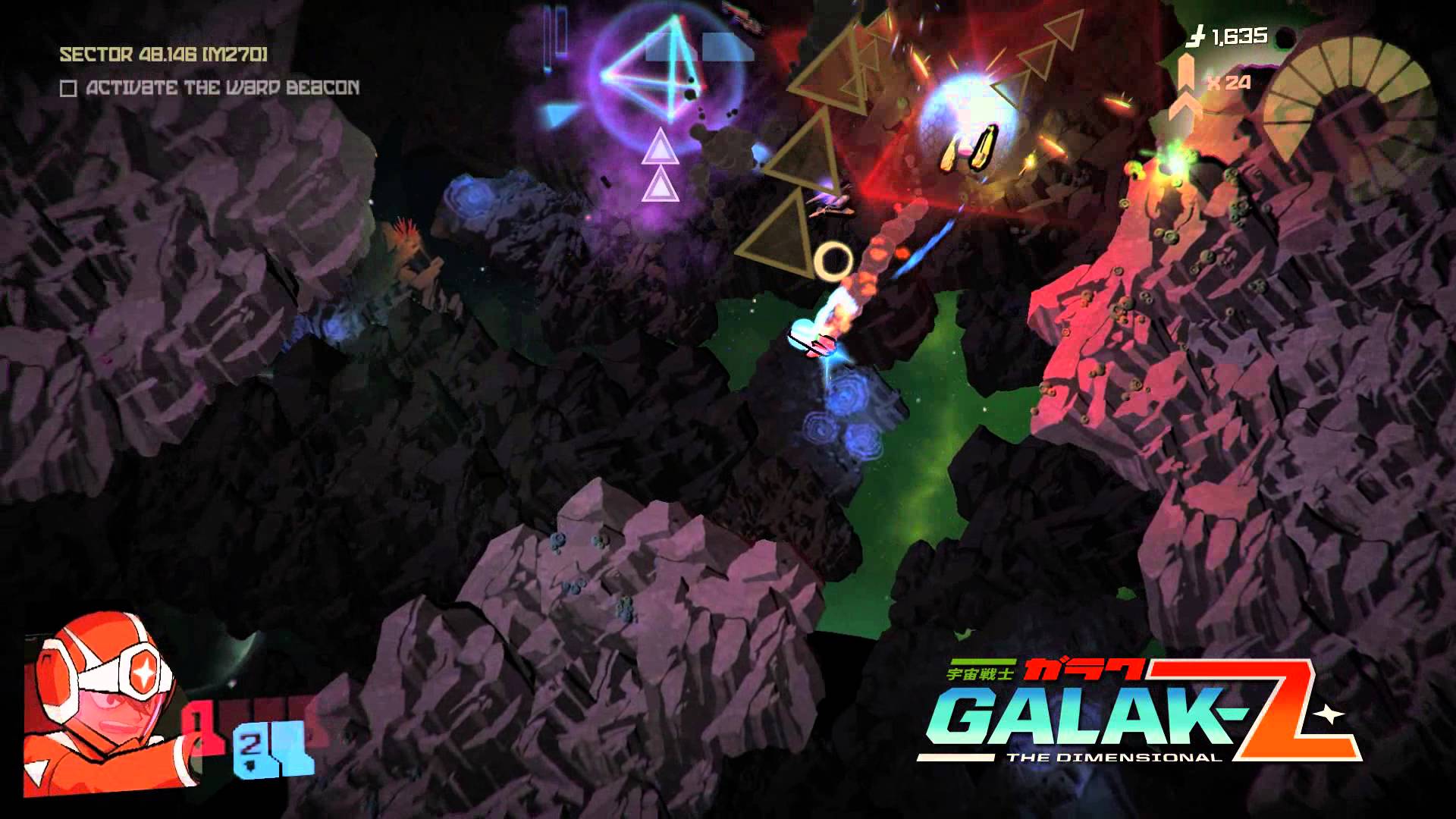 For Jake, mobile was always a platform he wanted Galak-Z to thrive on. The Japanese mobile scene has exploded over the past few years, eclipsing the popularity of dedicated handhelds and consoles, largely due to the platform’s peerless accessibility. Nearly everybody has a game-enabled phone in their pockets these days, and when done right a single game can capture the attention of millions of people on a daily basis. It’s not a simple achievement, mind, but Jake’s arcade background makes him uniquely equipped to take the scene by storm. “I think modern mobile has a lot of similarities to the classic arcade ethos: shorter levels, intuitive controls. You’ve gotta be able to jump into it and have a good time, or we’re not gonna hook people, you know?” Even so, he and 17-Bit were careful to partner with a publisher that knew its way around the mobile scene. “With mobile games, you have to give them a reason to come back. Gung-ho’s understanding of mobile is a huge boon,” Jakes says. He was adamant about partnering with a Japanese publisher, because he wants to give Galak-Z every chance at the colossal success he knows it deserves. He travels to Tokyo each month to meet with Gung-Ho president Kazuki Morishita, and hopes to foster a long-term relationship with the mobile powerhouse.

Jake’s plans for Galak-Z don’t stop with Variant Mobile, though. This man knows his IP has immense potential, and he wants nothing more than to explore it. “We’ve put so much effort into Galak-Z at this point. I love the IP, and I don’t want to be done with it. So we’re gonna keep cranking out stuff. I’d love to keep the Galak-Z universe going”. He tells me about plans for a Galak-Z animated series, similar to the Skulls of the Shogun series currently running on Nerdist, but on a much bigger scale, and even wilder ambitions like VR. “Like I said, we’re really invested in the IP at this point. It’s been really well received, people love the characters, they love the world, they love the space. There’s  a lot of opportunities to take it deeper. ” 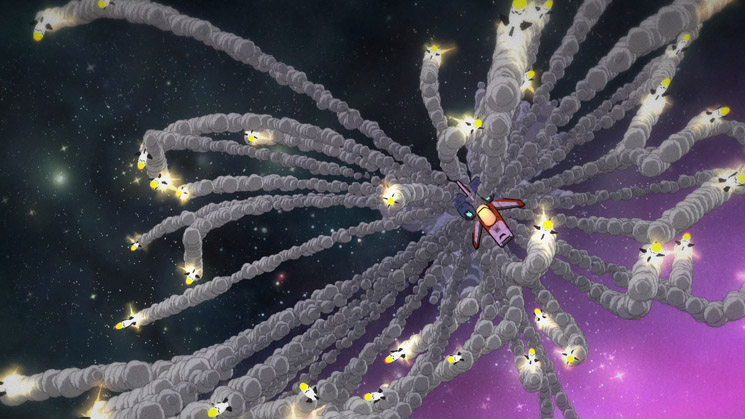 “Being a small company, specifically building your own brand is a big deal. I’d like to do a new IP as well, but I’d like to build a team where, if the game sells well enough, we can just kind of keep it alive, keep adding stuff, new content, more modes. I would love to get into multiplayer stuff at some point. I think it’d be a perfect fit; Even just a 4-player versus mode would be super fun. It’s got such a high skill ceiling; I’m still playing, and I’m still getting better and better and better, and I’m able to do things a little bit smoother every time. I can beat myself against the game all I want, but I want to be able to sit down with the guys and be like ‘Alright, who’s buying lunch, come on!’. I think that would be so sick.”

Jake and his family moved from Seattle to Kyoto last year, leaving most of the 17-Bit team behind to telecommute for the remainder of development. He recalls some tough times as the studio slaved over Galak-Z from different sides of the globe, but it sounds like those days are numbered. “The lead engineer and studio director are both moving to Japan in the next two months, so all the leads will be back together in Kyoto. It’s gonna make a big difference. The cool thing about being in Japan for me is that I’m close to Gung-Ho Japan; I can go there for all our meetings, and I’ve got contractors that I use in Tokyo, so I’m able to handle all the Asian stuff and we’ve got the Seattle team able to handle all the Seattle stuff. So it’s got ups and downs. But I am looking forward to having all the leads in the same room and sitting down together. No more email games.” 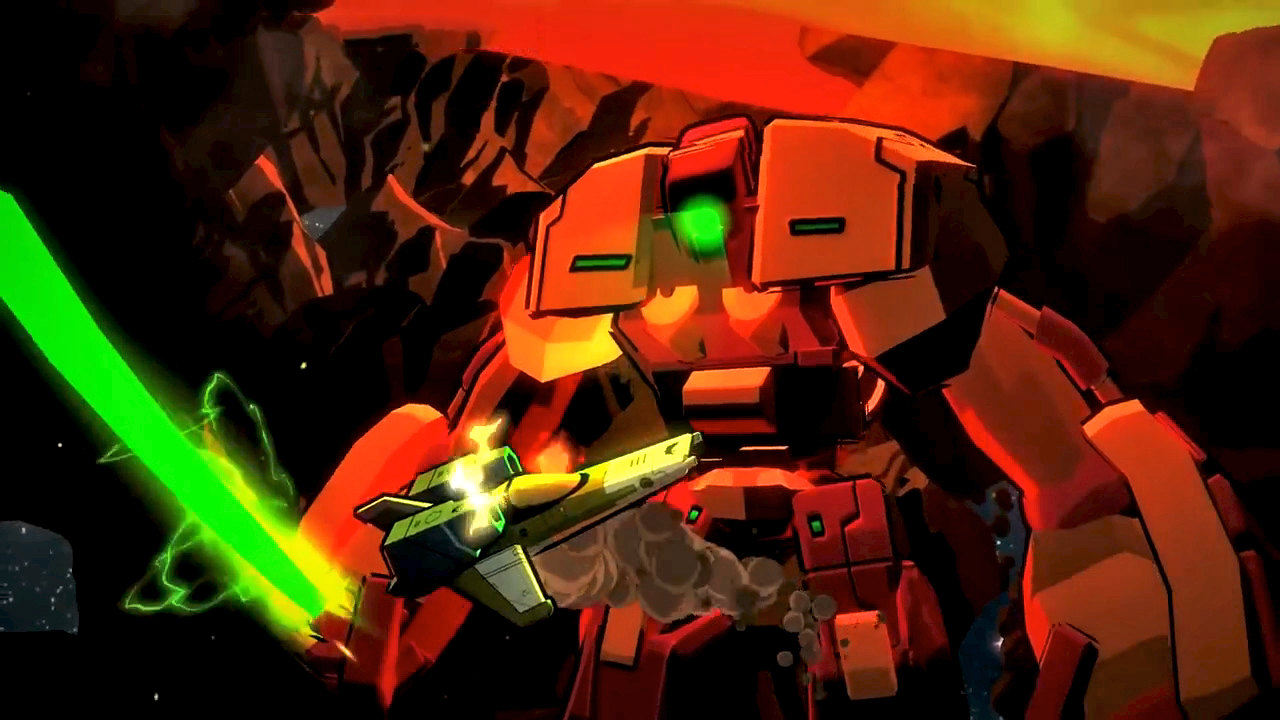 In the meantime, however, Galak-Z is still waiting for its fifth and final season. The game launched with four, each more difficult than the last, and 17-Bit plans to maintain that going into Season 5. “It’s meant for people who can beat season 4,” Jake explains. “A lot of people are like, ‘I beat the game, now what reason do I have to come back?’ So we’re focusing on giving them a reason”. Galak-Z‘s roguelike nature and increasingly intelligent enemies make it an adventure that never stops providing intense encounters and exciting exploration, but by catering to the needs of pilots who have already conquered the most harrowing experiences the game has to offer, 17-Bit could take the game to even more incredible heights.

Despite all of the plaudits Galak-Z has already won on PS4, it sounds like the best is still yet to come. The plans may not be finalized just yet, but it’s abundantly clear that 17-Bit and Gung-Ho are doing everything they can to make Galak-Z: Variant Mobile an adventure worthy of the standards set by the full game. With hard work, calculated design and pure, unfiltered passion, Jake and his team are setting Galak-Z up to be much more than a modest indie sensation. If they can produce the game’s same addictive quality on mobile devices, their incredible IP could blow up into one of the most prominent multi-media franchises in decades.