Developer Dontnod Entertainment may have had more episodes planned for Life Is Strange than it was first expected, according to a new rumour that has surfaced online.

A Reddit user, lixyna, has been sifting through Life Is Strange’s coding via Steam folders, with one of the files revealing that there is data for eight episodes (the screenshot featuring the episode list can be viewed below). 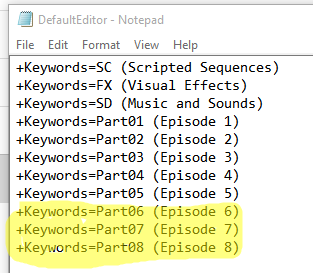 It’s a possibility that the eight episodes, as the Reddit user pointed out on the thread, may have been part of the early stages of development before Dontnod settled on the five-episode format for Life Is Strange, or maybe there were plans to introduce additional episodes to the title through DLC.

We’ve reached out to Life Is Strange publisher Square Enix for some clarity behind the image and we will update this story as soon as we receive a response.

Hannah Telle, who does the voice for Max Caulfield in Life Is Strange, recently expressed her delight at the commercial and critical success for Dontnod’s title, as well as sharing some enticing information on the forthcoming Episode 5: Polarized.

There were also praises from Telle for Ashly Burch’s performance as Chloe Price and how Dontnod has highlighted social themes like drugs and bullying in Life Is Strange.

Life Is Strange Episode 5: Polarized will be heading to PlayStation 4, PlayStation 3, Xbox One, Xbox 360 and PC.

For more on Life Is Strange, check out Hardcore Gamer’s exclusive interview with Hannah Telle.